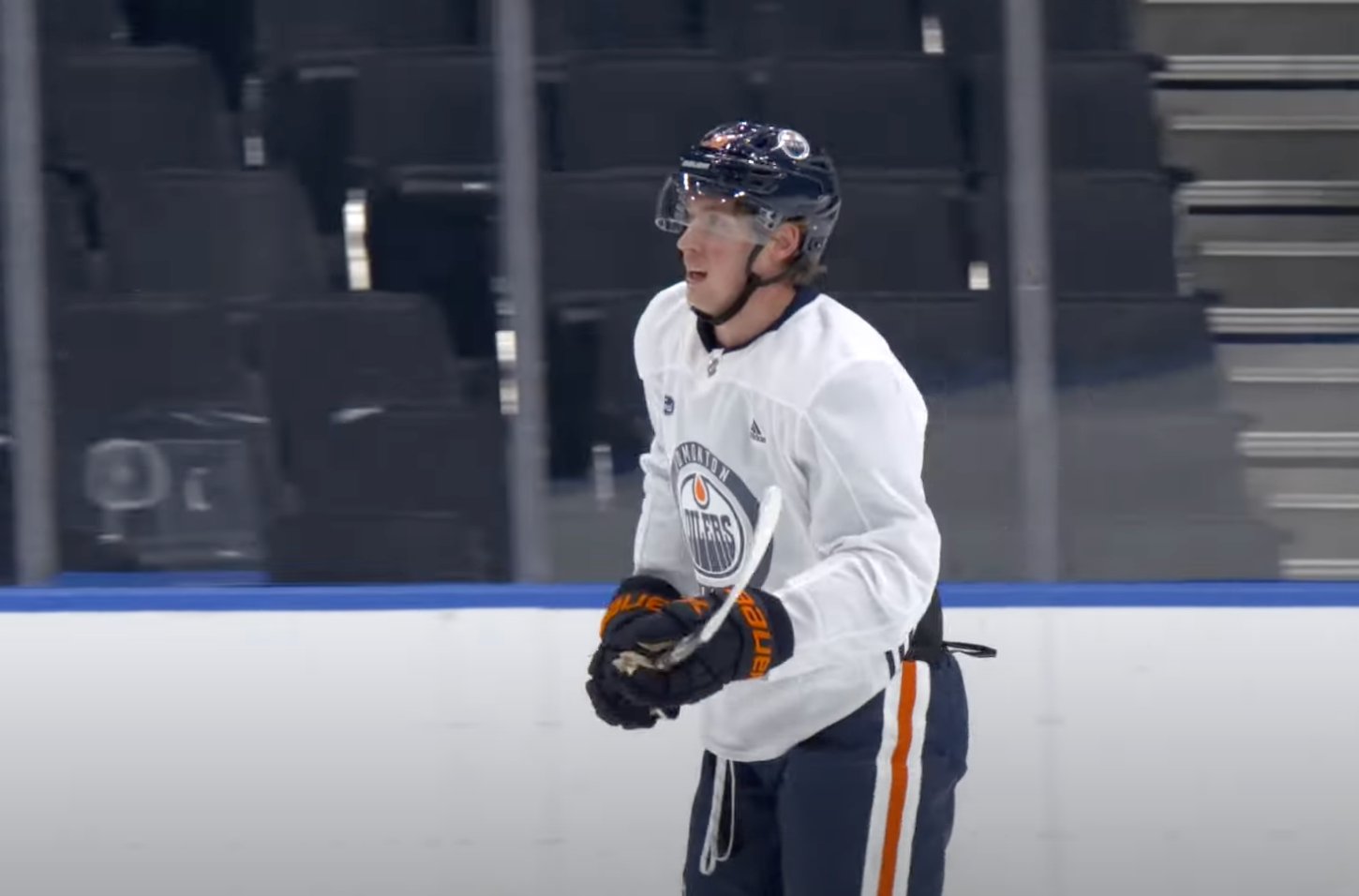 By Robin Brownlee
2 months ago
The old saying you never get a second chance to make a first impression takes a twist with Edmonton Oilers’ hopeful Dylan Holloway. While we first saw Holloway in the NHL June 6 in Game 4 of the Western Conference final vs. Colorado, he didn’t get much of a chance to show his stuff – seven shifts and 3:27 of playing time.
I don’t know a lot more about the Oilers 14th overall pick in 2020 than what his stats and some YouTube clips tell me – he’s a terrific skater — but that’ll change at training camp. What I do know is that by getting on the ice early – he is skating in town with a group that includes Leon Draisaitl – Holloway, 20, is showing he’s willing to do whatever it takes to earn a job with the Oilers, and that’s a good thing. Always has been.
Back in the day on the beat, a hockey writer looking for something to scribble before camp got started always knew where to look to find a prospect looking for an edge or to make an impression. You could find them skating at Perry Pearn’s 3-vs.-3 Hockey Camp at Knights of Columbus Twin Arenas or taking a twirl with the pros at the House Drake Built at the U of A.
These days, it’s at the Community Arena at Rogers Place, where Holloway is making like Mike Comrie or Ryan Smyth by skating alongside Draisaitl. Xavier Bourgault is also here. Holloway heads to the NHLPA rookie showcase in Washington Tuesday. After that, the Young Stars Tournament is back in Penticton starting Sept. 16. 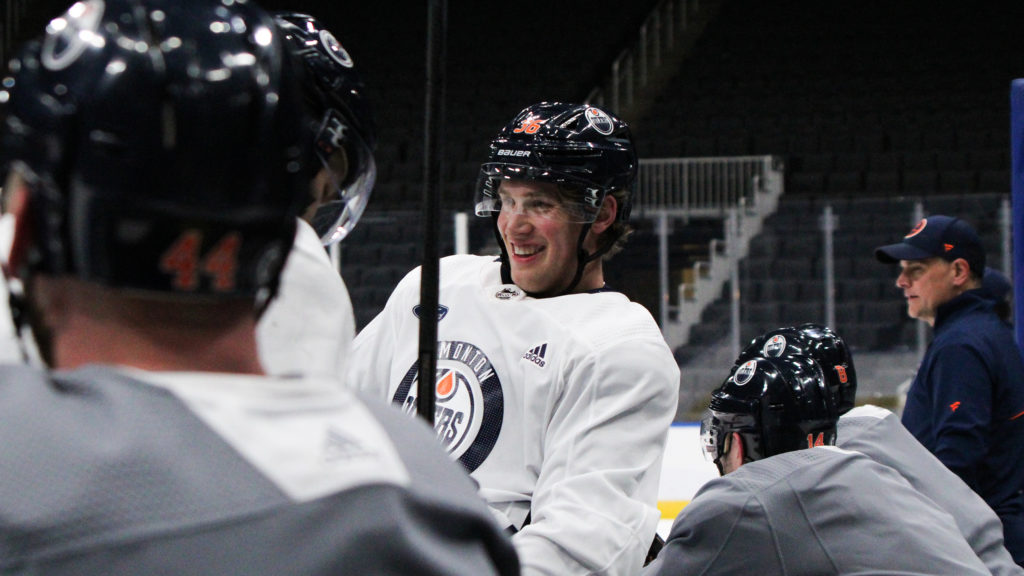 Then comes main camp with the Oilers, where Holloway will try to convince coach Jay Woodcroft he belongs in Edmonton instead of Bakersfield, where both of them spent time last season. “It’s definitely a goal of mine to push for a spot on the team this year,” said Holloway, who is coming off two wrist surgeries. “I think I have the capability. I just have to have a good camp. There’s a lot of good players at camp too, so I’ve just got to focus on myself.”
The wrist surgeries aren’t insignificant. Holloway first injured his left wrist in 2020-21 playing in the Big-10 with Wisconsin. He had a second surgery in September 2021 when his scaphoid bone, located near the base of the thumb, didn’t heal properly. The challenge is regaining full range of motion and staying healthy. “It’s feeling a lot better, that’s for sure,” he said.
“I don’t have to tape it anymore skating now and my shooting is fine, so it’s good. Obviously, there’s still little complications with it – a full range of motion, that kind of thing. I don’t need it too much for hockey. As long as I can shoot . . .”
“He’s in Edmonton right now. He is skating and Leon Draisaitl is in town with him. That will help Dylan’s cause,” says Oilers Now host and radio analyst Bob Stauffer. “There’s only one chance to make a first impression, so if you’re Dylan Holloway . . . it does not hurt him that he’s on the ice right now.” 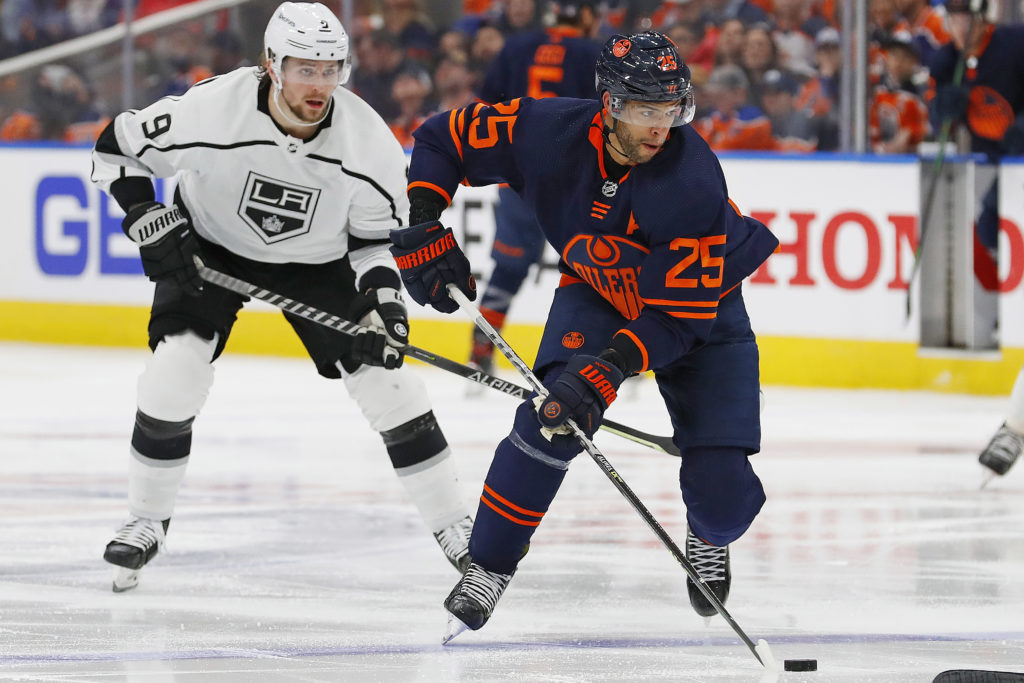 May 10, 2022; Edmonton, Alberta, CAN; Edmonton Oilers defensemen Darnell Nurse (25) carries the puck up ice in front of Los Angeles Kings forward Adrian Kempe (9) during the third period in game five of the first round of the 2022 Stanley Cup Playoffs at Rogers Place. Mandatory Credit: Perry Nelson-USA TODAY Sports
When GM Ken Holland talked about needing an internal push for the Oilers to improve during his exit interviews, he was talking about the kind of competition that’s shaping up on the blue line for this training camp.
As of now, Darnell Nurse, Cody Ceci, Tyson Barrie, Brett Kulak, newly acquired Ryan Murray, Evan Bouchard, Philip Broberg, Vincent Desharnais, Markus Niemelainen and Dmitri Samorukov are in the mix. We saw Niemelainen for 20 games last season and Broberg for 23 games.
Said Holland: “You’ve got to dig in here in the off-season to come in here in September and push for a bigger piece of the pie, bigger responsibility, or bigger minutes whether you’re chipping in on the penalty kill or if you’re some young player like Broberg or Holloway trying to push to make the team.
“I do plan that one of those young defencemen is going to be on our team for sure, maybe two. I told them that face-to-face at the end of the year. We’re trying to win and if I have to put someone back in the AHL or waivers, I’m prepared to do that.”

Seeing a lot of former Oiler tough guy Luke Gazdic these days by way of Twitter account Maple Leads, which bills itself as sports content for Canadians. I spoke briefly with Gazdic at Hockey Helps the Homeless in Edmonton May 6, but I didn’t realize he was offering his takes as part of this account. Whether Gazdic is talking NHL, MLB or marquee names like Tom Brady or Serena Williams, he’s really good and worth a listen.