By Robin Brownlee
11 months ago
From his “Well, I ultimately chose the Oilers just because of the weather” attempt to break the ice that was met by crickets, to fans feeling the need to point out online not even one member of the local media welcomed him to town, Evander Kane’s introduction to reporters by the Edmonton Oilers Friday went just as I expected it would. Awkward. Uncomfortable.
To understate, the acquisition of the talented and troubled Kane has ignited a lot of polarized debate. To hear some tell it, Kane is misunderstood, a victim of circumstance who deserves a second chance – even if he’s already burned through several of those like a crisp stack of $100 bills in Las Vegas. Second chance? How does anybody say that with a straight face? If what you really mean is you’re willing to look the other way and give Kane the benefit of every doubt if he can help the Oilers win, just say it. Own it.
On the flipside of an ongoing pissing match on social media, there’s a segment of fans who insist they aren’t going to support a team willing to bring in a player with Kane’s duly documented history of problems in the name of on-ice results. While there’s no debate Kane is an asset on the ice, there is no question he’s been a distraction off it. When it comes to the end justifying the means, they’re unwilling to make that leap.
As I’ve said, I’m firmly in the “No chance, no thanks” camp with Kane. You’ve got a right to disagree. The reality is no amount of name-calling or social media snark is going to change anybody’s mind. Talk, especially online, is cheap. Actions, on and off the ice, is what will determine how the bet GM Ken Holland coach Dave Tippett made works out. I don’t think they should have rolled the dice at all, but what I think doesn’t matter. This is their call.

Kane didn’t take long to make an impact last night on a line with Connor McDavid and Kailer Yamamoto in his debut. He scored the 1-0 goal on the way to a 7-2 waxing of the Montreal Canadiens as the Oilers extended their winning streak to four games. The 0-5-2 skid that had fans demanding Holland do something is today a distant speck in the rear-view mirror.
“It’s an important time for the Edmonton Oilers and it’s an important time in Evander’s career,” Holland said before the team jumped a jet to Montreal. “I think there’s good motivation on all our parts to have this work out in the best interest of everybody.
“I talked to people in our organization, I talked to people outside the organization. In the end, you’re talking about chemistry. When it comes to his talent, his skill set, obviously he’s a very, very talented player that’s going to make us better.”
For Holland, Tippett, the team and a large segment of the Oilers’ fan base, the possibility Kane has the ability “to make us better” is reason enough to look the other way. Fans in Atlanta, Winnipeg, Buffalo and San Jose have done the same with Kane at one time or another in the name of second chances since he first broke into the NHL in 2009-10. Here he is. 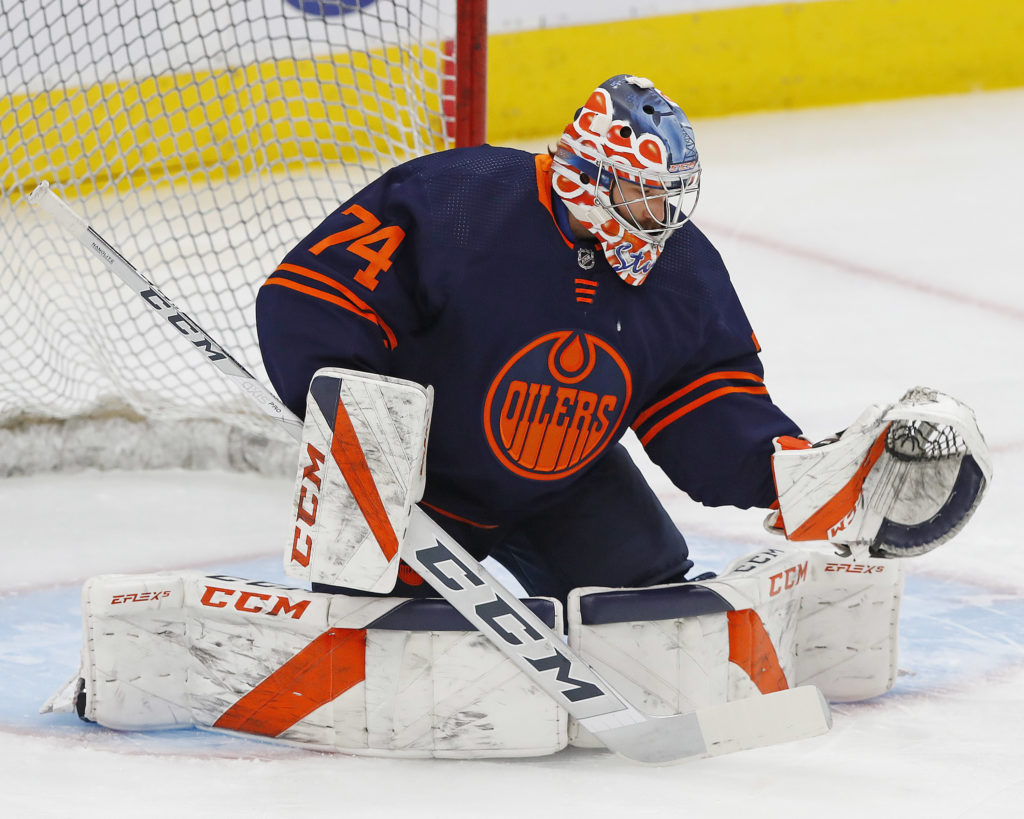 Nov 18, 2021; Edmonton, Alberta, CAN; Edmonton Oilers goaltender Stuart Skinner (74) makes a save during warmup against the Winnipeg Jets at Rogers Place. Mandatory Credit: Perry Nelson-USA TODAY Sports
Stuart Skinner got the net last night, giving Mikko Koskinen a well-deserved break. Like his teammates, Koskinen struggled mightily through December and the first three weeks of this month and took his fair share of criticism for it, but he grabbed a seat in Montreal with three straight wins in the books.
Koskinen sits at 15-8-1 with a 3.18 GAA and .900 save percentage after stopping 97 of 104 shots in wins over Nashville, Vancouver and Calgary. Playing from behind in all those games, as is a habit for the Oilers this season, Koskinen put together some timely stubborn stretches where he made a difference.
Despite his well-documented penchant for giving up soft goals, not to mention first goals, we’ve heard more than once that Koskinen is well-liked in the dressing room because he puts in the work and is a good teammate. There was more of that kind of talk after Thursday’s 3-2 shootout win over Nashville.
“He’s a guy we care about a lot in that room,” McDavid said after Koskinen blanked the Predators in the shootout. “He’s been under fire like a lot of our team, but a lot of it seems to be pointed at him . . . We’re a team in there and we got to work together and work our way out of it. He’s been a huge part of that. We need timely saves and he’s been part of it.”

We know the book on Koskinen. He’s fine when he isn’t asked to carry too much of a workload. I was one of those people ranting about wanting Koskinen out of the crease for good just three weeks ago, but we still don’t have a firm return date for Mike Smith and his bad thumb and Skinner is still getting up to speed – all this with the trade deadline approaching.
We don’t know yet what, if anything, Holland intends to do about his goaltending between now and the trade deadline March 21, but Koskinen has helped win some games and buy him some time with these last three stellar starts.