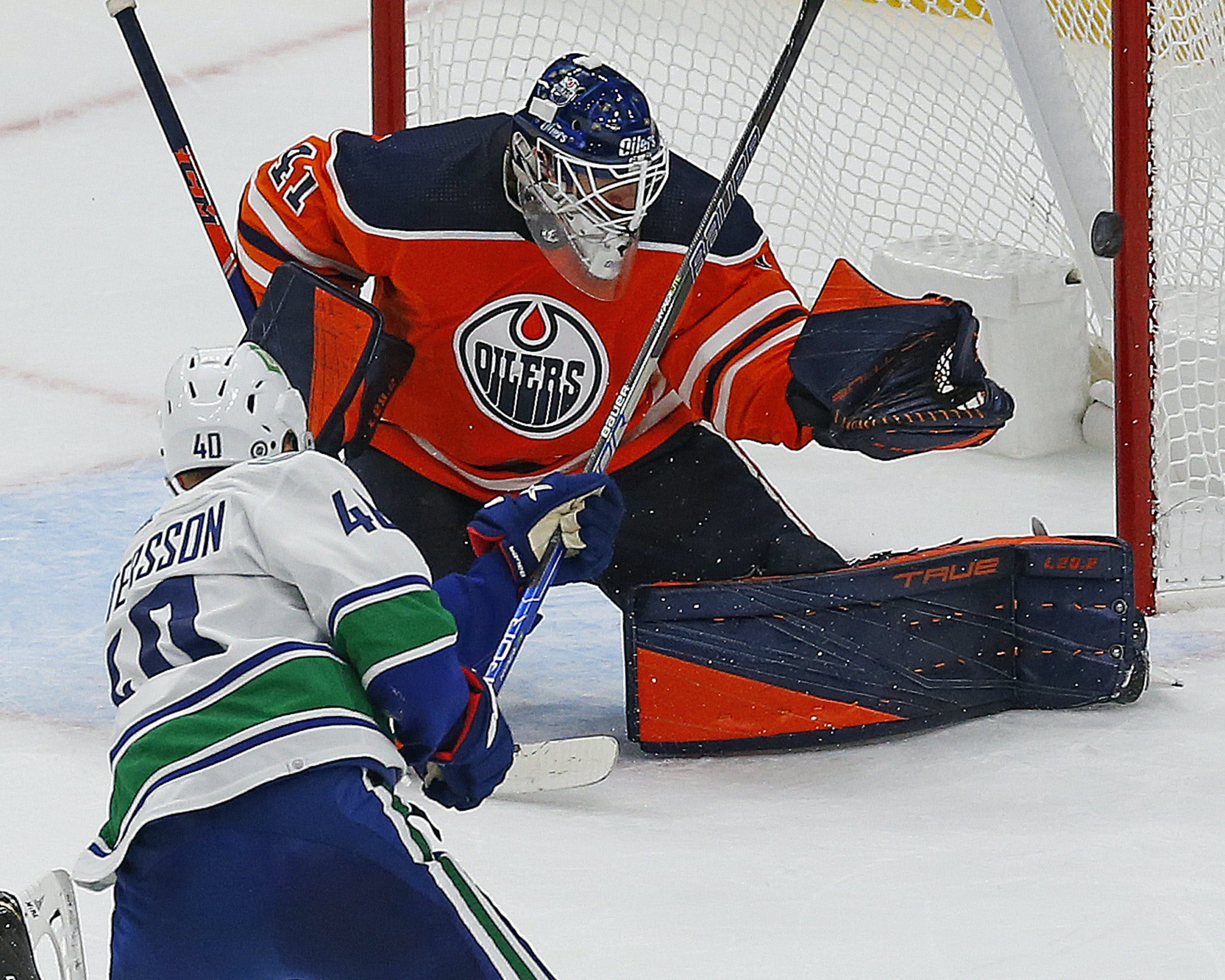 By Robin Brownlee
10 months ago
So, how long has Edmonton Oilers’ goaltender Mike Smith been out of action with the “lower body injury” (high-ankle sprain) he sustained during the second period of a game against the Anaheim Ducks Oct. 21?
Well, Smith’s time missed with the injury – first characterized as something he “tweaked” that landed him on IR interspersed with on-ice sessions – sits at 67 days today. We hadn’t even heard of the Omicron variant of COVID then, let alone seen it turn everything upside down heading into the Christmas holidays.
We’re still not certain how and when things will play out for the Oilers and other teams after an extended holiday break. The Oilers were supposed to play the Flames in Calgary tomorrow after COVID testing and skating here today, but the NHL announced postponement of Monday games on Friday. The Oilers next scheduled game is Wednesday in St. Louis, but that depends on testing. Likewise, we still aren’t certain about Smith’s status these 67 days later, according to what GM Ken Holland said this week.
That’s not as important as the big picture, and it’s helped that Mikko Koskinen and Stuart Skinner have been pretty good during Smith’s absence — compounded by a string of other injuries and players lost to COVID protocol — but it’s a quantum leap from “tweaked” to not knowing for certain what his status is today, no? 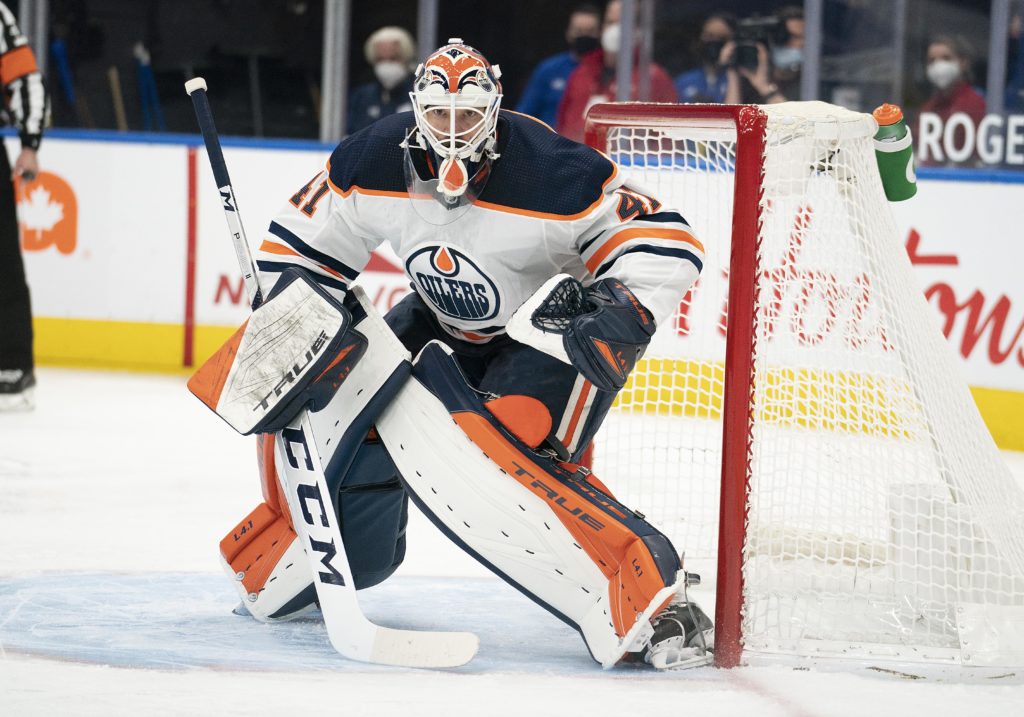 Mar 27, 2021; Toronto, Ontario, CAN; Edmonton Oilers goaltender Mike Smith (41) defends the goal against the Toronto Maple Leafs during the first period at Scotiabank Arena. Mandatory Credit: Nick Turchiaro-USA TODAY Sports
“We’re not sure where Mike Smith is at yet,” Holland said during an interview with Oilers Now host Bob Stauffer Wednesday. “He was practicing, we thought he was close, and now we’ve gone into a five-day or basically a week break now having been in Seattle on Saturday and Sunday being an off-day.
“It’s going to be a complete week off for many of our players, including Mike. So, I’m not sure if he will be ready to go (Dec. 27), but we’re hoping he’s going to be ready to go shortly thereafter. If Mike’s not ready to go, we’ll figure something out . . .”
Before the postponement, Holland told Jason Gregor he didn’t anticipate Smith being ready against the Flames and indicated there was also some question that he’d be ready for St. Louis. That uncertainty is as much about inactivity and getting up to speed as anything. The chat he had with Gregor is here.
Koskinen and Skinner have held up reasonably well as a tandem since Smith went out. Skinner, recalled from Bakersfield when Smith was injured, has been the better of the two. That said, until Smith gets back in the blue paint and shows he’s recovered to the point he can stay there, questions will remain – in addition to roster questions caused by COVID protocol and injuries.
Coach Dave Tippett, Ryan Nugent-Hopkins, Devin Shore, and Ryan McLeod will be out of COVID protocol and available to play Wednesday. Darnell Nurse, Duncan Keith, and William Lagesson are in isolation, as is Jesse Puljujarvi. Zach Hyman (shoulder) is ready to go. Markus Niemelainen is out three weeks with a broken bone in his hand.
No matter how you slice it, Tippett will be juggling his line-up and there’s going to be some rust to shake off. Sixty-seven days since he last saw live fire as of today, that goes double for Smith, whenever he’s deemed ready. 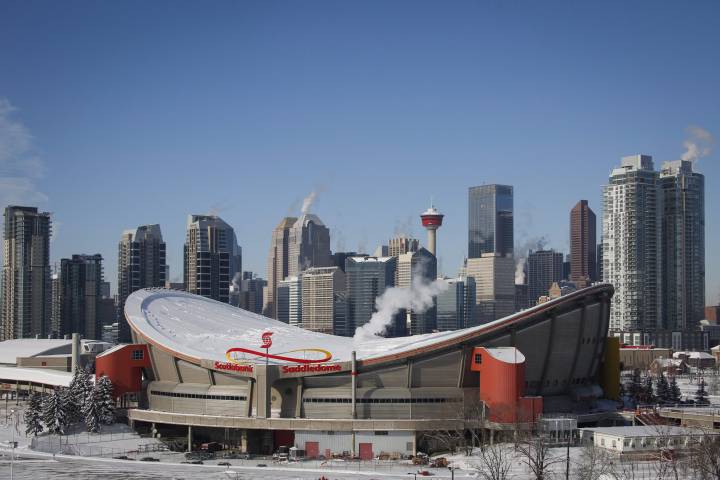 The Flames hit the holiday break upside down and on fire in the ditch with four straight losses, virtually the entire team in COVID protocol and six games postponed. Now, their latest push to build a new rink to replace the Saddledome, which is basically the double-wide of NHL buildings these days, has come off the rails.
Calgary Sports and Entertainment Corporation chairman Murray Edwards said last week the CSEC is backing away from the deal because of some infrastructure costs added by the city. The Flames and the city have been trying to hammer out a deal for a new rink for a decade. The Flames walked away from a potential deal with the city four years ago. Now this.
“We’re not looking for villains here — these are very complicated decisions and complex projects,” CSEC president John Bean said. “No one makes a decision this large on one particular data point. It’s an accumulation of issues. It came to a point where you kind of tap out and go ‘OK, it’s a little too risky.’ CSEC is determined there is no viable path forward to complete the construction of the event centre project.” The news item is here.
Of course, this latest breakdown in discussions over a new rink project will lead to speculation about the Flames moving elsewhere even though the CSEC issued a statement saying the group intends to stay in Calgary. Even playing in the worst building in the NHL, the Flames are valued at $680 million by Forbes.

A GOOD ONE GONE

The hockey world lost a damn good man Thursday as former Oilers’ assistant coach Bob McCammon passed away at the age of 80. McCammon, who did two separate tours with the Oilers, loved being around the rink. Cagey had a great dry of humor, was quick with a quip and was always happy to talk hockey.
In his first stint with the Oilers, 1985-86, McCammon and John Muckler worked under Glen Sather. In his second go-around, 1995-96 through 1997-98, he worked under Ron Low with a variety of assistants – Dave Semenko, Kevin Primeau and Ted Green. Cagey could chirp with the best of them, but he famously met his match one night in a game with Colorado in an exchange with Mike Ricci that was picked up by the microphones.
“Hey, Ricci. Nice haircut,” McCammon said with Ricci getting ready for a face-off near the Oilers bench. Ricci returned fire a split second later – he had the Oilers burying their faces in their gloves with an on-the-money response. “Shut up, Mr. Potato Head,” Ricci barked. “He got me,” McCammon later shrugged. Yes, he did. Godspeed, Cagey. You’ll be missed.