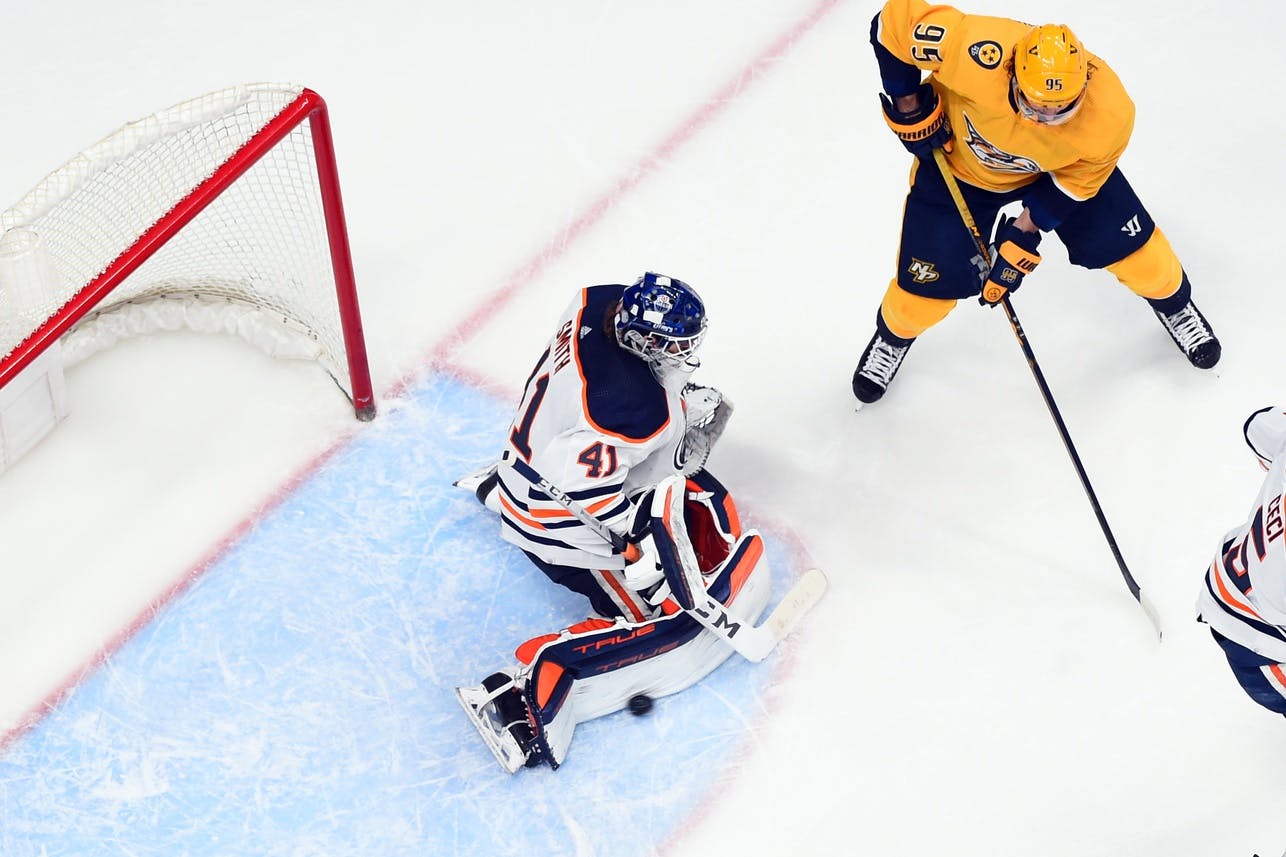 By Robin Brownlee
9 months ago
When the Edmonton Oilers get the kind of goaltending they got from Mike Smith against the Vegas Golden Knights in a matinee Saturday, you get what the local faithful were buzzing about on the way to the parking lot after a 4-0 win.
Smith’s 39 saves for his second consecutive shutout – he blanked Nashville by the same 4-0 score Thursday — was his sixth straight win. That was more than enough as the Oilers waltzed to the win on an afternoon when Kris Russell scored the winner with his first goal since March 17, 2019 and the Oilers didn’t get a single point from @Connor McDavid and @Leon Draisaitl..
The Oilers improved to 44-26-6 for 94 points and are now 21-8-3 under Jay Woodcroft and 8-1-1 in their last 10 games. These numbers aside, it’s been a while since the Oilers looked this good during a game when McDavid and Draisaitl were held in check.
“He made some big saves for us and allowed our team to get its sea legs,” Woodcroft said of Smith. “I thought we got better as it went on. Their team played hard, created some chances, and Mike was big when called upon. So great game, two really good ones for him in a row. It’s not easy, but he’s making it look like it is.
“I thought we got contributions up and down the lineup. I thought we played really well in Nashville too. I thought that was an excellent road game for us. Different people are finding ways to contribute, and that’s what good teams have.
“A lot of contributing and productive players, it’s a credit to a lot of work that they’re putting in. The way we’re asking our players to play is not an easy style, but our players are putting the work in and it’s fun to see them execute.”

By the time Wayne Gretzky and the Edmonton Oilers arrived from the WHA for the start of the 1979-80 NHL season, Mike Bossy had already made a name for himself as one of the top goal-scorers in the league with the New York Islanders.
With 53 goals in 1977-78 and 69 in 1978-79 for the last NHL team I cheered for – not easy because the Islanders had some lousy seasons – before I packed up for journalism school, Bossy was something special even before the Isles reeled off those four straight Stanley Cups with the Oilers dynasty was taking shape.
The goal-scoring feats and HHoF credentials we know. With 573 goals in a career limited to 752 games by chronic back problems, Bossy still ranks 10th among right wingers in goals – four of the players ahead of him played twice as many games. We can debate where Bossy sits all-time on the right side, but he was special.
Bossy passed away Friday at the age of 65 after a battle with lung cancer. Too young and too soon for family, friends and legions of fans from a special era who remember what a magnificent talent he was. Godspeed, Mike Bossy. 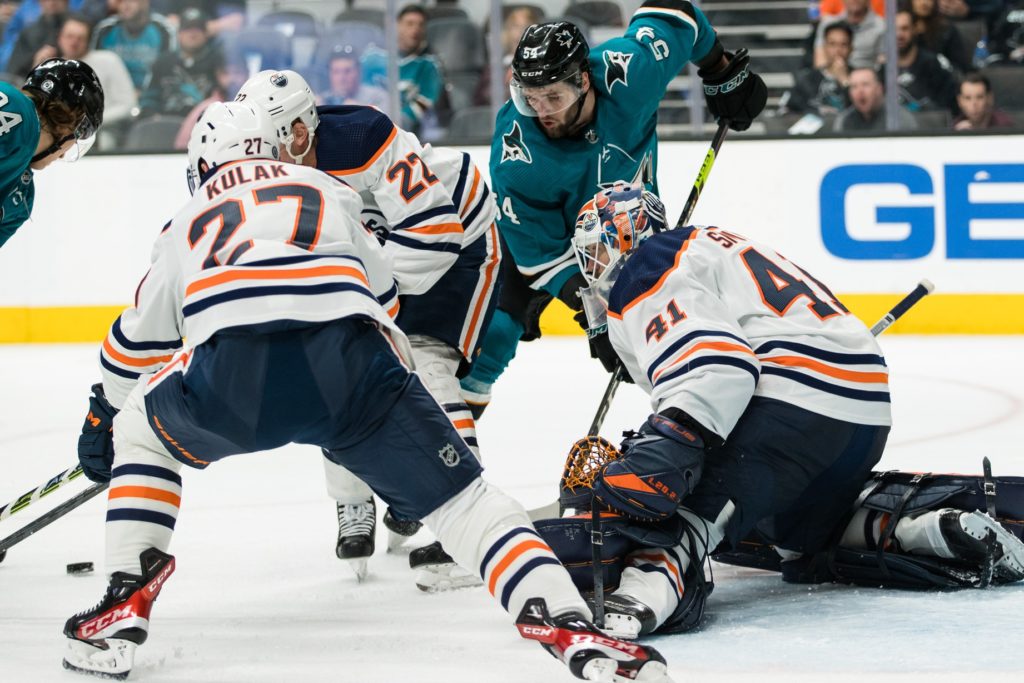 Apr 5, 2022; San Jose, California, USA; Edmonton Oilers goaltender Mike Smith (41) and defenseman Brett Kulak (27) defend against San Jose Sharks center Sasha Chmelevski (55) during the second period at SAP Center at San Jose. Mandatory Credit: John Hefti-USA TODAY Sports
Smith’s shutout of Nashville was the 43rd of his career, pulling him into a tie for 38th place in career collars alongside Lorne (Gump) Worsley before he added No. 44 against Vegas. The different eras aside, you’d be hard-pressed to find two puck-stoppers more different in style and in physical make-up — from Smith’s flowing locks to Worsley’s military style crew cut on down.
Worsley, who played most of his 860 NHL games 1952-74 barefaced with Montreal, the New York Rangers and Minnesota North Stars, was all of five-foot-eight and 180 pounds. Gump was a two-time Vezina Trophy winner, the 1953 Calder Trophy winner, and hoisted four Stanley Cups with the Habs. Like many stoppers in his day, Worsley relied on reflexes not size, and angles.
Smith, 40, hit 43 shutouts in his 666th game. Yes, 666, that’s right. He’s six-foot-five and 220 pounds and he’d just as soon punch you in the mouth as a call for help if you give him any aggravation in the paint. One other tidbit, if you consider Smith ancient at 40, Gump was 44 when he got into 29 games in his final season with the North Stars in 1973-74.
Smith is tied with Mikka Kiprusoff and Ryan Miller at 44 career shutouts. Good company.

Does anybody have a count on the offside reviews Oilers’ video coach Jeremy Coupal has called for this season? If Coupal, who joined the Oilers from Nashville in the summer of 2016, has been wrong on any reviews he’s requested, I don’t recall them. He had another Thursday early in the third period to negate a goal that would have cut the Oilers lead to 3-1.
“I think we have the best video coach in the NHL in Jeremy Coupal,” Woodcroft said. “I’m proud that I, a few years ago, was part of the process of bringing him in from Nashville to Edmonton. He works extremely hard. He’s very detailed and he’s quick in his decision making . . .”