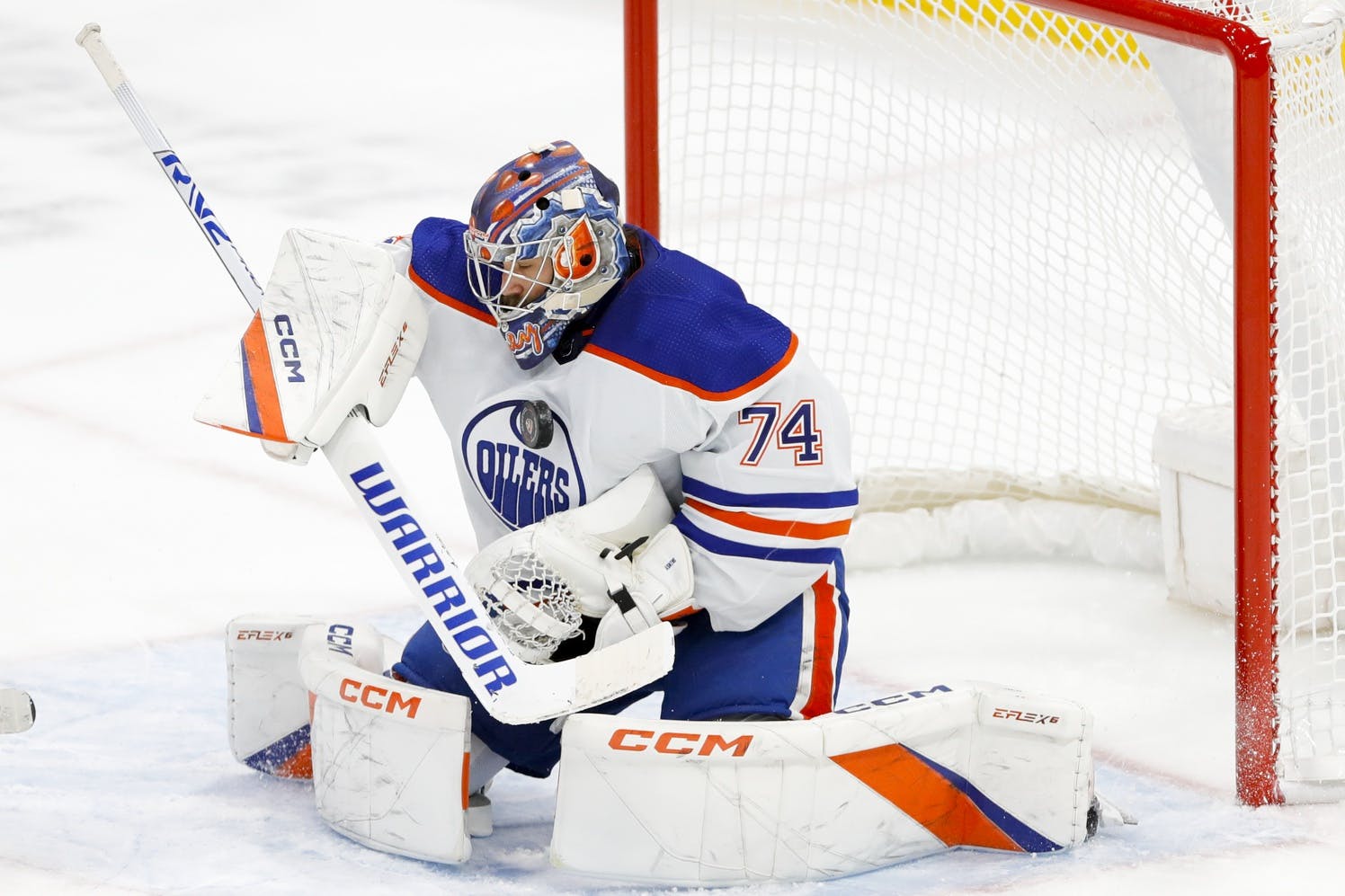 By Robin Brownlee
23 days ago
The Edmonton Oilers could’ve packed their bags early and headed home empty-handed Saturday if it wasn’t for Stuart Skinner. They instead tossed two points into their luggage with a 4-2 win over the Florida Panthers thanks to a 40-save performance by Skinner.
With Jack Campbell on the bench after a tough night in Carolina on Thursday, Skinner was the difference against the Panthers, especially early. He stopped all 19 shots he faced in the first period and had 23 saves in the books by the time Tyson Barrie made it 1-0 in the second period with his first of two goals.
In a timely bit of foreshadowing during a guest spot in the first intermission, Wayne Gretzky sang Skinner’s praises. To hear the Great One tell it, the stellar play we’re seeing from Skinner isn’t a big surprise – at least according to brother and assistant GM Keith Gretzky, who had the Edmonton-born stopper on the AHL farm in Bakersfield.
“My brother told me he was the best player in the AHL for a couple of years,” Gretzky said matter-of-factly. “Watch out for this kid. He’s going to be a great young goaltender in the NHL. Good for him. And Jack Campbell is going to be fine too . . .” 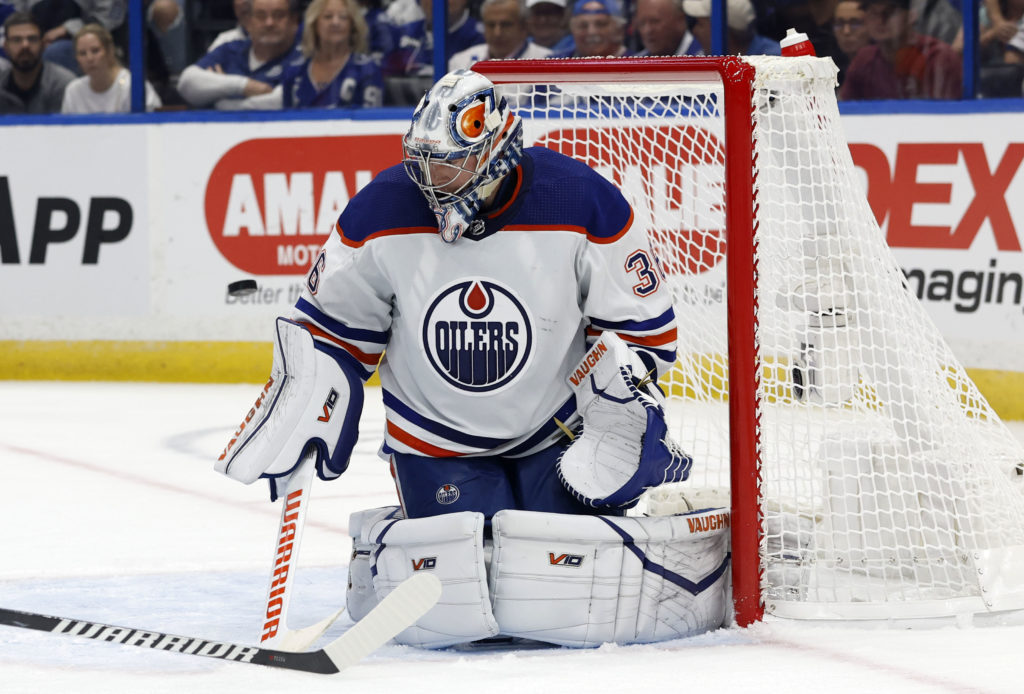 Nov 8, 2022; Tampa, Florida, USA; Edmonton Oilers goaltender Jack Campbell (36) makes a save against the Tampa Bay Lightning during the first period at Amalie Arena. Mandatory Credit: Kim Klement-USA TODAY Sports
A lot of people appreciated Campbell’s honesty when he characterized his play as “pathetic” after a 6-2 loss to the Dallas Stars back on Nov. 5. It’s not very often a player will carve himself like that, although people who know Campbell say he can be hard on himself. Janne Niinimaa was like that – if you wanted a no-BS take about the team or about Janne himself, he was your go-to guy.
In many cases skipping the niceties and getting right to the bottom line – most often in a players-only meeting behind closed doors — can help jumpstart a turnaround. Campbell did it his way after the Dallas game by calling himself out publicly. For one game at least, a 3-2 win over Tampa Bay Tuesday, it looked like maybe it had done the trick. Campbell was outstanding. Well, not so fast.
After allowing seven goals on 32 shots in Thursday’s 7-2 drubbing in Carolina, Campbell has worse statistics today – he’s 6-4-0 with a 4.27 GAA and an .873 save percentage — than he did when Dallas dummied the Oilers. As it stands right now, Skinner has the net and Campbell has some time to get his game straight.
The thing is, while that level of honesty is appreciated and can provide a jolt, it’s not a card you can play very often. Teammates like Campbell and they talk about him being a terrific guy, but at some point the bottom line when you’re on a five-year deal at $5 million per, is you have to let actions speak louder than words and put a stretch together where you stop some pucks.

Nick Kypreos wrote about Campbell the day of the game in Carolina and touched on that. “While many on the outside would call Campbell’s honesty refreshing, inside Rogers Place it’s not. The team would like to see his honest and often emotional assessment of his play take a back seat,” wrote Kypreos.
“His teammates have always said he thinks of others first, which is a nice characteristic to have outside of hockey, but it might be time for Campbell to get selfish and stop pucks for himself above anyone else . . .”
As an aside, when you go to NHL.com and click on Campbell’s player page, he’s still dressed in a Toronto Maple Leafs uniform in the main photo. Unless the Oilers sent him back to Hogtown in the last couple days without telling anybody, it’s maybe time for the folks at the website to get on that, no? He signed with the Oilers July 13. 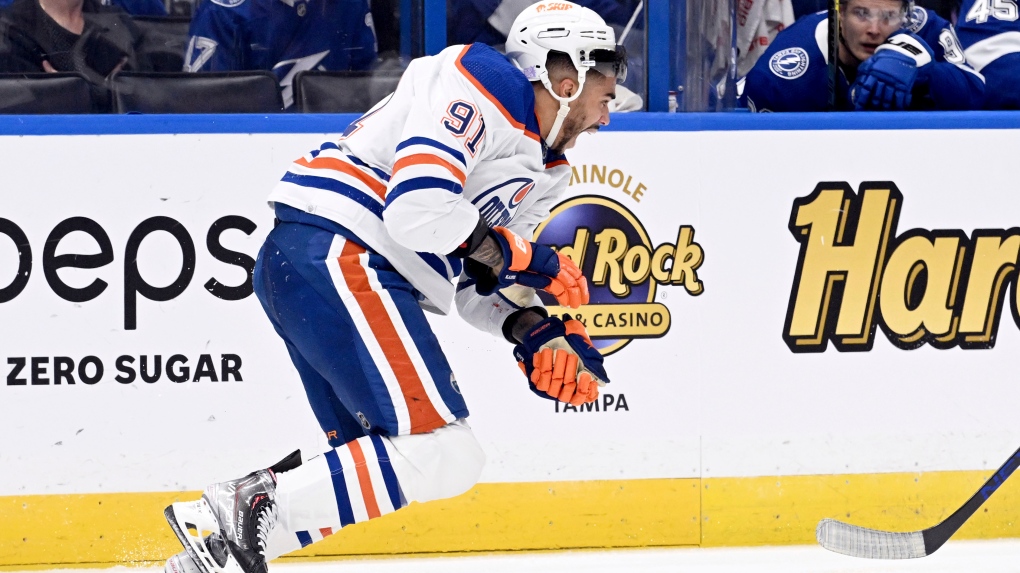 When you see any skate cut injury, like Evander Kane sustained to his left wrist in Tampa Bay, you never forget it, but it was a relief to see him talking Friday about taking the first steps to a comeback that will keep him out as long as four months. It was obvious right away that Kane was in trouble, but the medical staffs of both teams took control of a frightening situation at Amalie Arena.
To this day, the most difficult story I’ve covered as a sportswriter involved a skate cut – a freak accident in September of 1985 that resulted in the death of 18-year-old Abbotsford Falcons player Jeff Butler during a BCJHL pre-season game. Butler had his neck cut by the skate of teammate Darren Naylor after Naylor was sent cart-wheeling by a hip-check.
I was sports editor at the Peace Arch News in White Rock at the time. I knew Jeff as a member of the track team at his high school, which wasn’t far from my newspaper. I’d watched him run relay, but I wasn’t aware he played hockey until the day my phone rang and his father told me the terrible news.
Given all the contact that takes place at high speed between players with razor sharp blades on their feet, it’s amazing that we don’t see more incidents like Kane, Clink Malarchuk, and Richard Zednik, to name just three. All these years later, I still think of Jeff Butler and his family when a scene like Tuesday unfolds.
Editorials
Featured
Oilers Talk
Recent articles from Robin Brownlee