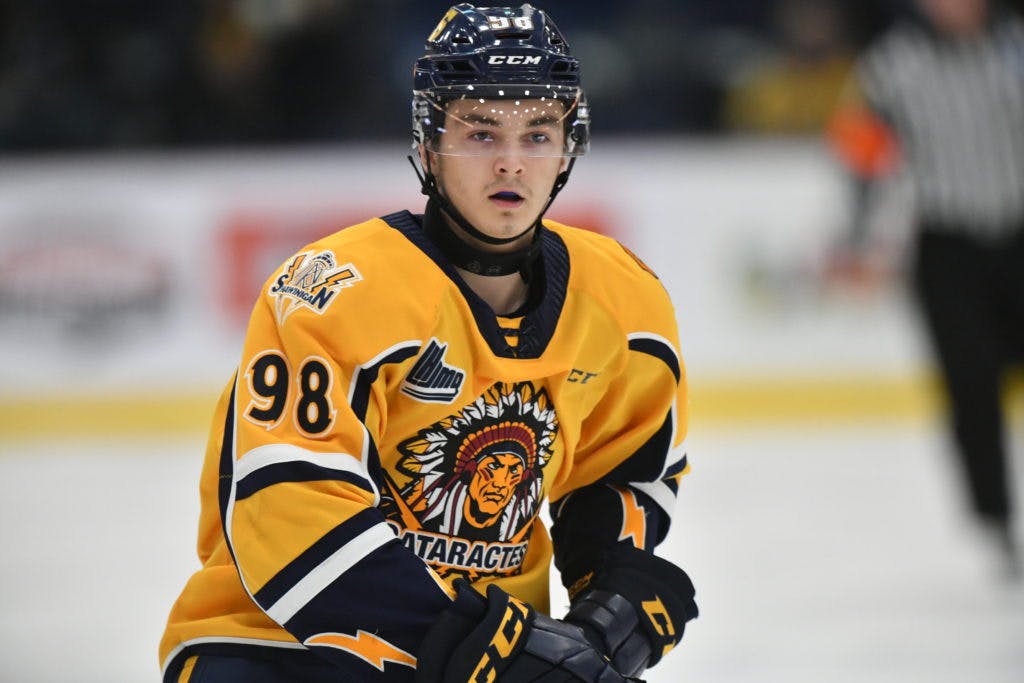 By Liam Horrobin
1 year ago
The Edmonton Oilers opened up their 2021-22 campaign with a win last night but in typical Oilers fashion. Hold a comfortable lead for most of the game, giving everyone hope, and then blow it late in the third.
Thankfully, Mike Smith made some big stops, and Kyle Turris buried his shootout goal to give them a 3-2 victory.
While they didn’t contribute massively on the boxscore last night, it’s promising to see how many young players are on the roster right now. Evan Bouchard, Kailer Yamamoto, and Ryan McLeod have played in Bakersfield within the last few years and have developed within the Oilers system. Something that wasn’t happening that long ago. You can also add Tyler Benson (healthy scratch) and William Lagesson (IR) to that list, both expected to play some role this season.
That’s what we are here to look at today. We’ll be looking around the hockey world from Russia to Moose Jaw to track how the Oilers’ prospects are doing. Right now, Edmonton has a great pool of talent at its fingertips, and it’s fair to say this is the deepest prospect pool they’ve in a while
The first player we’ll take a look at is Xavier Bourgault (22nd overall, 2021). The debate around this pick at the time was about how Edmonton should’ve taken Jesper Wallstedt to improve their prospect goaltending depth. However, maybe we shouldn’t have been so rash to assume Bourgault wouldn’t be an elite prospect for them too.
He’s playing with the Shawinigan Cataractes (QMJHL) and has had an excellent start to the season. After being held pointless on opening night, Bourgault scored six points in his next three games with a two-goal game against Sherbrooke Phoenix. The Cataractes forward has a good shot of making the World Juniors this Christmas for Team Canada, too, giving Oilers fans an opportunity to see what Holland drafted for them.
I spoke with Bourgault before the NHL Entry Draft back in July. Find out a little more about him by watching that interview.
Carter Savoie (100th overall, 2020) is another of the top forward prospects this team has drafted over the last couple of drafts. Savoie is a local product from St Albert who spent his junior career in the AJHL with the Sherwood Park Crusaders, where he scored 53 goals in 54 games in his last year. It’s safe to say that he knows how to put the puck in the net, which he has proved he can do at the NCAA level, too, with 13 goals for the University of Denver as a freshman. His sophomore year has started just as well, with four points in the Pioneers opening weekend series against the Arizona State Sun Devils. Savoie grabbed himself three assists and a single goal on the top line.
The last forward we’ll check in on is the Oilers’ Russian prospect Matevi Petrov (180th overall, 2021). Petrov came over from the MHL in Russian to play for the North Bay Battalion in the OHL, who took him first overall in the CHL Import Draft. He’s a 6’2′ left-winger who has been firing the puck home in the early portions of the season. Petrov scored four times in three games and grabbed an assist taking no time to adjust to Canadian junior hockey.
Most draft experts had Petrov going in the second or third round but didn’t go until sixth. Another possible value pick from Ken Holland and his team.
On the blueline, Philip Broberg (8th overall, 2019) is the big name everyone wants to hear about; however, we’ll monitor him more once the Condors season gets underway. For now, Max Wanner (212th overall, 2021) grabbed a couple of assists for the Moose Jaw Warriors in his first four games. Then in the NCAA, German prospect Luca Münzenberger played twice for the University of Vermont but didn’t score a point. Not much else to report for defencemen.
That’s for this week’s Oilers Prospect Report. Every Thursday, I’ll be back to fill you in and how the Oilers future is looking.
Other Prospects
Jake Chiasson (F – 116th overall in 2021) – Brandon Wheat Kings – Out with an injury
Shane Lachance (F – 186th overall, 2021) – Youngstown Phantom (USHL) – 6 games, 0 points
Tyler Tullio (F – 126th overall, 2020) – Oshawa Generals (OHL) – 3 games, 4 assists
Maxim Berezkin (F – 138th overall, 2020 ) – Lokomotiv Yaroslavl (KHL) – 13 games, 1 assists
Filip Engaras (F – 169th overall, 2020) – University of New Hampshire (NCAA) – 2 games, 2 goals, 3 points
Jeremias Lindewell (F – 200th overall, 2020)- MoDo Hockey J20 (J20 Nationell) – 5 games, 2 goals, 4 points
Tomas Maura (F 162nd overall, 2019) – Providence College (NCAA) – 2 games, 1 goal
Maxim Denezhkin (F – 193rd overall, 2019) – Lada Togliatti (VHL) – 12 games, 2 goals, 9 points
Patrik Siikanen (F – 195th overall, 2018) – JVP (Liiga) – 12 games, 4 goals, 7 points

After signing up for a free account, we’re going to give you a bunch of boxes with player names and you’re going to pick a name from each box until you’ve put together a super crew that you think can contend for a NationDrafts championship. Seems easy, right? It is easy and that’s not just because you’re wicked smaht. Sign up for FREE right here.
Nation Takes
Oilers Talk
Recent articles from Liam Horrobin