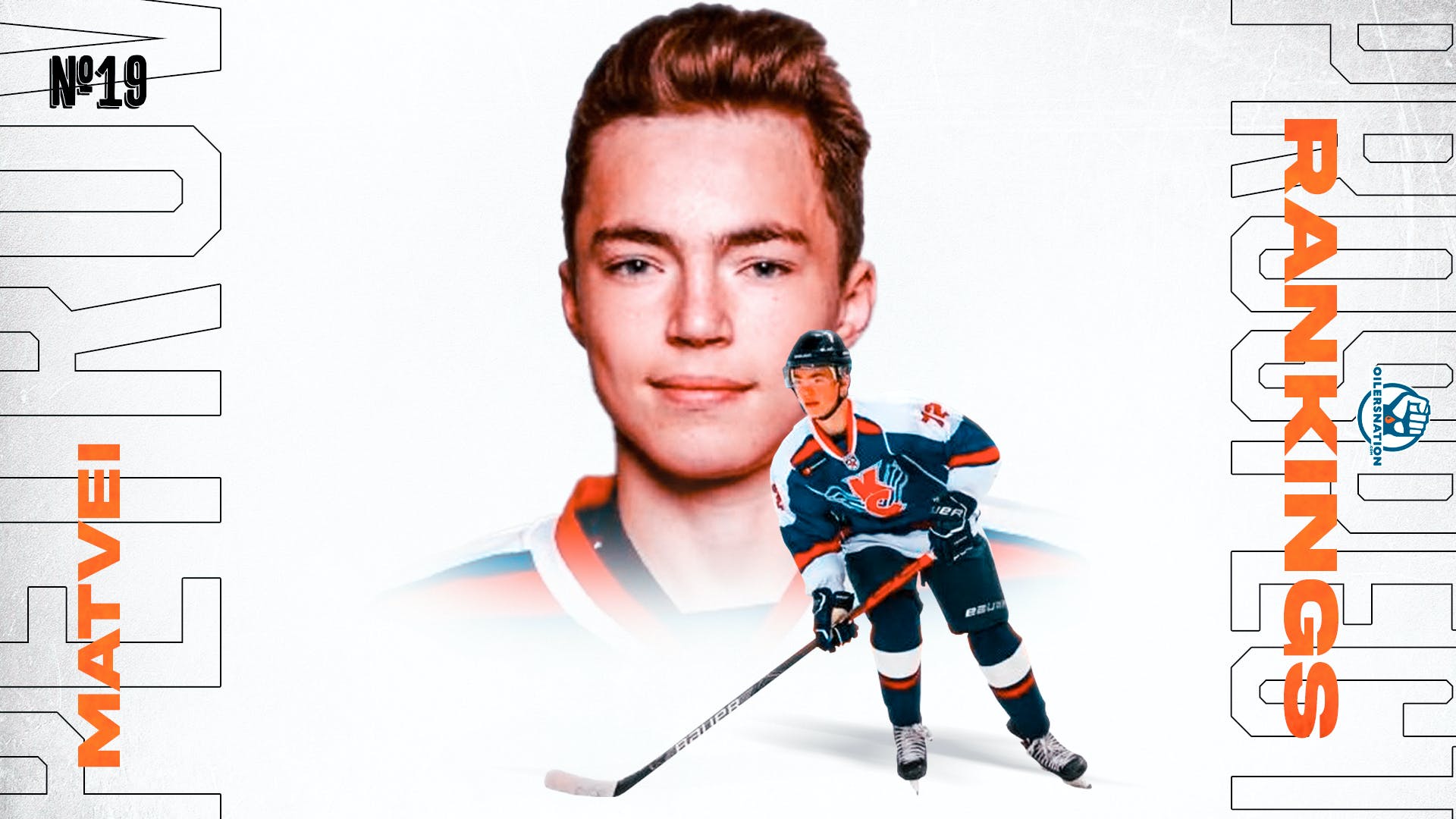 By Cam Lewis
1 year ago
The Edmonton Oilers have had a clear focus on adding highly-skilled forwards to their farm system over the last couple of drafts.
In 2020, the Oilers drafted exclusively forwards with all six of their selections. The trend continued in 2021, as the team used their first-round pick on smooth QMJHL forward Xavier Bourgault, who I’ll talk about later in this series. Towards the end of the draft, Edmonton found Matvei Petrov, a sniper out of Russia with an excellent shot and strong offensive instincts.
The Oilers selected Petrov with their sixth pick, No. 180 overall, the one that Kyle Dubas declined to take in exchange for Zach Hyman’s free-agent rights. Petrov was ranked in the top 100 by most scouting services ahead of the draft so there’s potential for this pick to be a hidden gem.

Petrov put himself on the map as a prospect in 2018-19 when he scored 32 goals in 24 games in Russia’s U16 junior league. He then jumped up to the MHL, essentially Russia’s version of the CHL, the following season and put up five goals and nine points in 21 games, solid production for one of the youngest players in the league.
That showing was enough for Petrov to be selected No. 1 overall in the CHL Import Draft by the North Bay Batallion. Due to the COVID-19 pandemic wiping the entire OHL season in 2020-21, Petrov remained in the MHL, where he led his team with 22 goals and finished second in points with 42. There’s no word yet as to whether Petrov will travel overseas to play in the OHL in 2021-22 or if he’ll continue his development in Russia.
As I said earlier, Petrov was ranked quite a bit higher on the majority of pre-draft lists than where the Oilers ultimately snagged him in the draft. The hype around Petrov comes from his excellent scoring ability. Ben Kerr of Last Word on Sports had him ranked No. 79 and raved about Petrov’s arsenal of shots and how he can score from all over the offensive zone…

“Petrov is a pure sniper. He has an outstanding array of shots. He loves to set up for his one-timer, especially on the power play. Petrov gets it off with great power as well as excellent accuracy. He also does a good job of adjusting his feet if the pass isn’t perfect. Petrov also has an excellent wrist shot and snapshot. He has a lightning-quick release. Petrov effectively changes the angle on his shot just before shooting.”

But Petrov also features multiple holes in his game that he’ll have to fix in order to become an NHL player. Corey Pronman of The Athletic ranked Petrov No. 113 before the draft and pointed out that, as of right now, he’s fairly one-dimensional as a player…

“Petrov was the No. 1 pick in the CHL Import Draft to North Bay but played in Russia all season where he was solid in the junior league there. He’s a player who stands out with the puck on his stick. He makes skill plays frequently through defenders and shows a lot of creativity as a playmaker from the perimeter and in small areas. Petrov also has a big shot that can score from range. He has a technically smooth skating stride, but it lacks quickness to separate from opponents. Petrov can play too much on the perimeter, though, and while he can score from there you’d like to see him generate more in the high-percentage areas. In a sentence, Petrov has a chance due to his skill and scoring, but he will have to add elements to play in the NHL.”

While Petrov is going to be a project, that last line from Pronman explains why this was a nice pick for the Oilers to make in the sixth round. Petrov needs to fix multiple areas of his game in order to hack it at the NHL level, but the one thing he’s very good at doing is the hottest commodity in the game — scoring goals.
It would be interesting to see Petrov come overseas and play in the OHL, but a huge season in his third go-around at the MHL level in Russia will certainly build hype around this prospect. He finished 19th in the league in goals in 2020-21 as a U18 player, so his next season could be a huge one.
For reference, players who I consider to be “prospects” for this countdown are skaters who have played fewer than 50 NHL games and goaltenders who have played fewer than 25 NHL games. I’m basing the rankings on a combination of upside and the likelihood of reaching that potential.