By Cam Lewis
1 year ago
Jim Benning went about his summer like a man fighting for his job.
Over Benning’s seven-year tenure as the general manager of the Vancouver Canucks, the team has made the playoffs just twice. They did so in his first season and then went on to miss in four consecutive years. During that time, the Canucks stockpiled plenty of talent through the draft and appeared to be entering a period of contention.
In 2020, they were among the team fighting for a playoff spot in the Western Conference when the season got wiped due to COVID-19. The Canucks were invited to the summer 2020 playoff bubble and did better than any other Canadian team, coming just one win away from advancing to the Western Conference Final.
Given that success, the Canucks came into the North Division in 2021 with legitimate aspirations to be a contending team. That didn’t happen.
Vancouver gave Benning the offseason to clean up his own mess and he responded by pulling the trigger on a massive trade that has the team’s roster looking quite a bit different than it did last season. If things go south again for the Canucks, though, it’s difficult to imagine Benning will get another chance.

Record: 23-29-4 (7th in North Division) / Goals For: 151 (24th of 31), Goals Against: 188 (26th of 31).
The Canucks were never really seriously in the mix in the North Division in 2021.
They started off the season with a win against the Oilers and then went on to lose five of their next six games. They had a four-game winning streak after that but three of those victories came over the Ottawa Senators, who, at the time, were essentially an automatic win. The Canucks would promptly go on a six-game losing streak on a trip through Montreal and Toronto that put them at 6-11-0 after the first month of play.
A nice stretch in March that featured seven wins in eight games made it seem like the Canucks were climbing their way back into the fight, but the fact four of those wins came in either overtime or the shootout raised valid skepticism about the team’s legitimacy.
And then all hell broke loose.
In late March, the Canucks started having games rescheduled due to having multiple players on their roster test positive for COVID. When it was all said and done, the team didn’t play a game for nearly one month and they had 25 players and coaches test positive for a variant of the virus that was running wild in British Columbia at the time.
The Canucks made their return on April 18 were tasked with playing 19 games over the course of 31 days. They pulled off shocking back-to-back wins over the Maple Leafs right off the hop and then predictably proceeded to implode. Vancouver would wind up winning just five of their final 17 games and finished the season with a 23-29-4 record, dead last in Canada.
The COVID outbreak obviously played a role in Vancouver’s terrible season, but the team had issues beyond that. Their defence was putrid, as they had the league’s highest expected goals against (per Natural Stat Trick) by a very wide margin. Their offence was also well below league average, which is due in part to the fact Elias Pettersson missed over half of the season with a wrist injury. 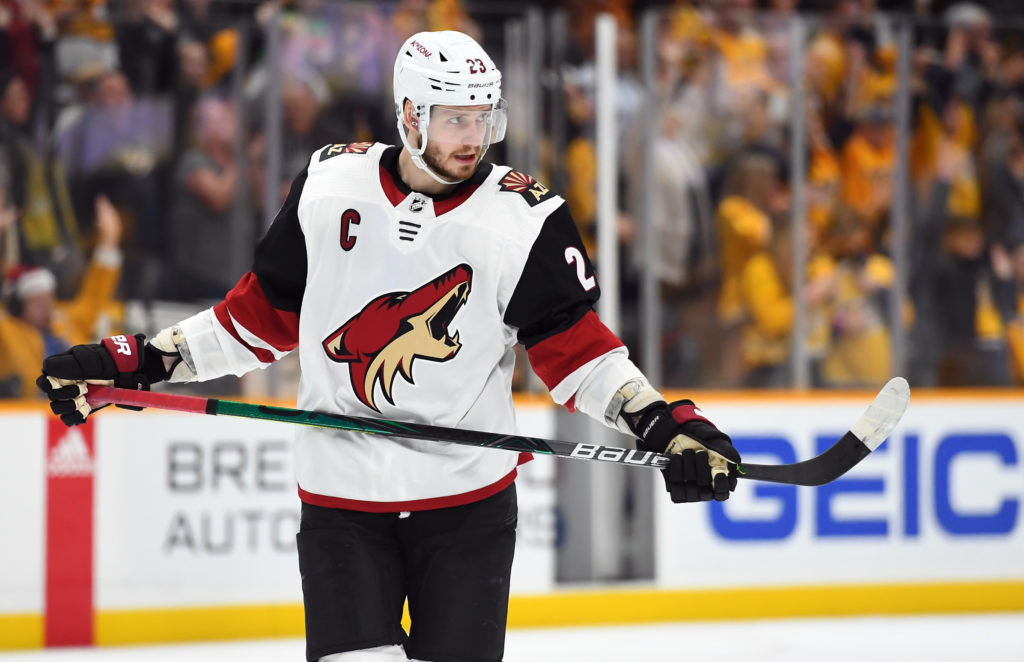 Notable Additions: Oliver Ekman-Larsson, Conor Garland, Jaroslav Halak, Tucker Poolman, Jason Dickinson, Luke Schenn, Brad Hunt.
Notable Subtractions: Nate Schmidt, Loui Eriksson, Alex Edler, Braden Holtby, Jake Virtanen, Jay Beagle, Antoine Roussel, Sven Baertschi, Travis Boyd.
Benning made significant changes to the Canucks’ roster in order to address these issues.
With both the offence and the blueline in mind, the Canucks swung a huge deal, trading their 2021 first-round pick, No. 9 overall, to the Coyotes in exchange for Oliver Ekman-Larsson and Conor Garland. The Coyotes also took on a handful of bad contracts, Loui Eriksson, Jay Beagle, and Antoine Roussel, in return.
Ekman-Larsson was once one of the league’s top defenders, but his play has deteriorated over the past few years. The hope for the Canucks is that getting out of a miserable and hopeless environment in Arizona will help rejuvenate Ekman-Larsson’s play. He’ll likely play alongside Tucker Poolman, who the Canucks signed to a four-year deal in free agency. Poolman boasts an impressive package of size and skating ability, but he’s 28 years old and hasn’t consistently played above a bottom-pairing role at the NHL level.
While the Canucks added Ekman-Larsson and Poolman to their top-four and depth defenders Luke Schenn and Brad Hunt, they also moved on from long-time veteran Alex Edler and minute-muncher Nate Schmidt. Those two ranked second and fourth on the Canucks’ blueline in terms of expected goals for percentage, so it isn’t a certainty that these changes will actually make their blueline better.
In terms of forwards, it’s pretty reasonable to assume Vancouver will be better this year than they were last season.
They dropped some dead weight in the aforementioned Arizona deal and added some quality forwards, such as Garland, Jason Dickinson, and rookie Vasily Podkolzin. The big key here, though, will be having a healthy Elias Pettersson in the lineup every night. The Canucks sorely missed their franchise pivot last season when he was injured and having him back makes their offence significantly better.
Ultimately, the Canucks could be a good team this year, but it’ll take a lot of things going right in order for that to happen. They need Pettersson healthy, they need Ekman-Larsson to rebound, and they need Thatcher Demko to repeat his 2021 performance.
If those three things happen, the Canucks will be in the mix for a playoff spot. If not? Benning might be out of a job.