Philip Broberg has been fantastic in his current role. Can he sustain this level of play against tougher competition? 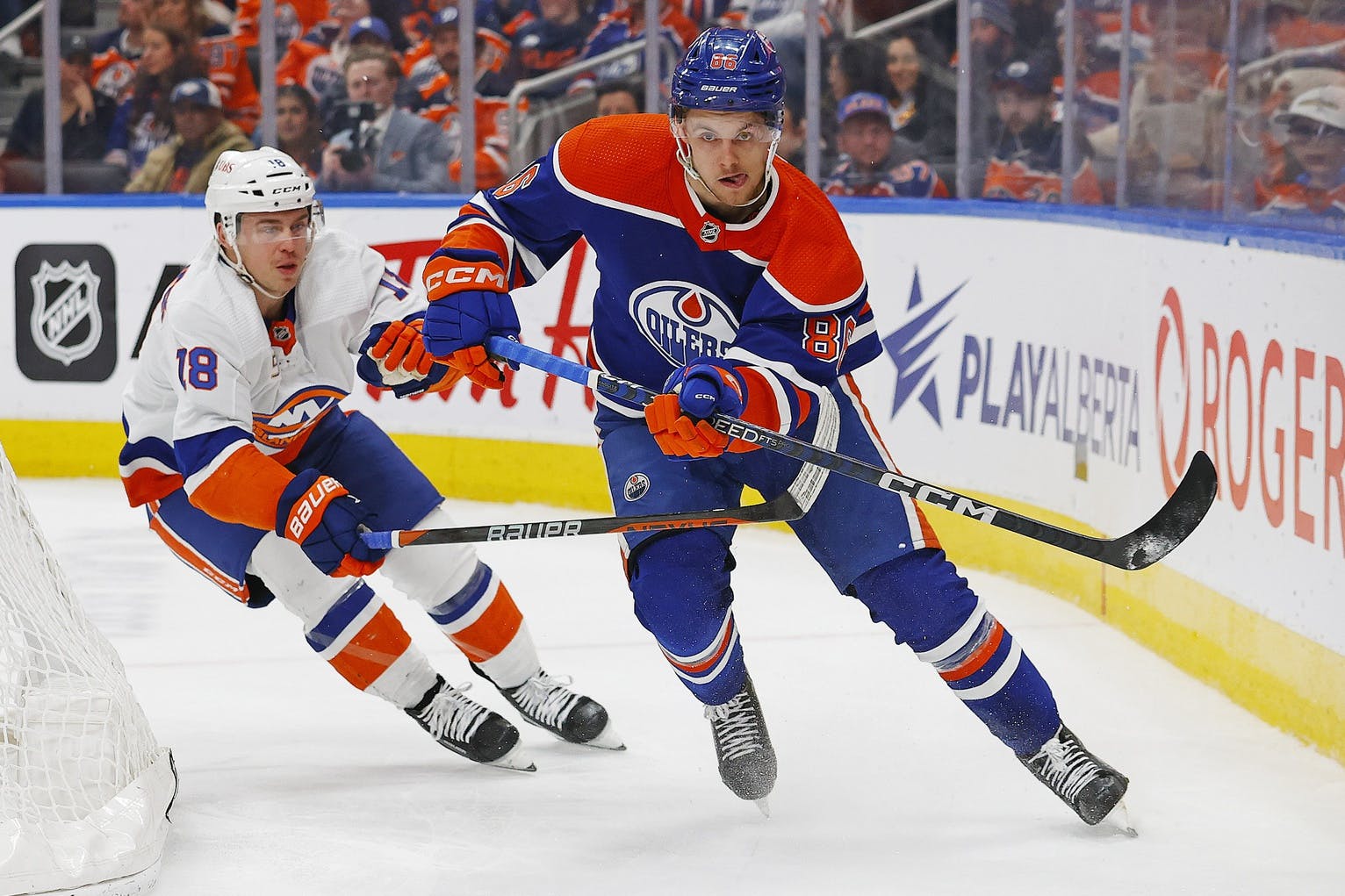 By NHL_Sid
10 days ago
As usual, this season has been a roller-coaster for the Edmonton Oilers. After a couple of rough games at the start of January, Edmonton seems to be finding their game again, with a recent five-game winning streak. A top-three spot in the Pacific Division looks much more likely.
The most significant change has been their defensive play. Recently, this team looks much more like the Oilers team we saw last season after Jay Woodcroft and Dave Manson were hired. Their NZ and forechecking structure seems immensely improved.
Another major reason for Edmonton’s success is the performance of some of their younger players, which notably includes 21-year-old Philip Broberg. His box-score stats of 4 points in 21 GP don’t fully capture how effective he’s been.
Currently, Broberg leads Edmonton’s defensive core with a superb 62% expected goal share and a 65% goal differential at 5v5. With Broberg on the ice, Edmonton has out-chanced the opposition at a fantastic ratio of 135 – 89. He’s primarily been partnered with Evan Bouchard, and that pairing has been superb in the minutes they’ve played thus far.
Let’s dive into what Broberg is doing to obtain these excellent metrics.
*All on-ice stats via Natural Stat Trick, all microstats manually tracked by me

Puck retrievals are a simple, but important aspect of defensive play. They play a key role in starting zone exits and transition attacks.
I’ve also tracked defensive-zone puck retrievals under pressure for Oilers skaters this season, to see how well they can efficiently retrieve pucks and defend the forecheck. Here’s how Edmonton’s defencemen rank in this aspect; 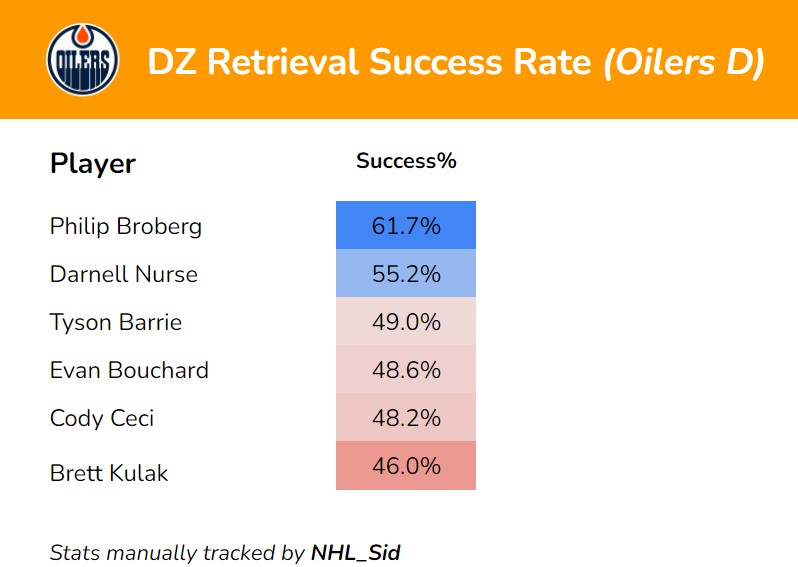 Most of Edmonton’s defencemen aren’t great with retrievals (although I track retrievals differently than other trackers out there, so I don’t know what the league average is), but Nurse is very good at them, and Broberg is excellent in this facet. Here’s some video examples:
Broberg uses his stick and reach to limit the amount of space Paul (TBL #20) has, and forces him to dump the puck in. Broberg also goes after it and takes a hit to retrieve the puck, and get it to Bouchard. Edmonton eventually exits the zone.
The Seattle forward dumps the puck in against Bouchard, and Broberg cleanly retrieves it and gets it out to Draisaitl. Foegele eventually chips it out of the zone with success.
This is a perfect example of how to execute a transition attack after the opposing team tries to enter the zone. Broberg retrieves a dump-in/tip-in and successfully passes it to Holloway. He makes a pass along the boards to McLeod who completes the controlled exit and carries it out. McLeod passes the puck into the offensive zone to Hyman, who carries the puck behind the net to Holloway for a high-danger shot that hits the post, and McLeod finishes the rebound. A full team effort on this play, but it all begins with a dump-in retrieval from Broberg.
Even on plays where he doesn’t initially retrieve the puck, Broberg is good at helping the team obtain the puck back. Here, Broberg initially loses the puck race for the dump-in, but alongside defensive support from McDavid, he stays with the play and pressures the Vegas forechecker. Vegas can’t get a shot off the forecheck or establish a cycle, as Broberg pressures Carrier (VGK #28) just enough to help Bouchard recover the puck, and pass it out of the zone.
These aren’t pretty plays, and while a lot of them seem quite simple, it’s quite common to see defencemen botch these types of retrievals and immediately turn the puck over once they obtain it. This has been an issue for every other Oilers defenceman aside from Nurse, and especially for Kulak. Jay Woodcroft had also praised Broberg for his ability to quickly retrieve pucks.
Not only does retrieving pucks prevent the opposition from getting a scoring chance or establishing a cycle, but it can also result in offence the other way.
Broberg isn’t often the one who exits the zone, but this is what makes him and Bouchard such a splendid fit. Both Broberg and Bouchard can force dump-ins, Broberg can retrieve those dump-ins, and Bouchard can obtain the puck from Broberg to exit the zone (Bouchard leads the defence in possession exits per hour). The vast majority of zone exits begin with a successful puck retrieval, so even if he isn’t always the one executing the exit, Broberg is a key part of them.

Speaking of forcing dump-ins: in the most basic sense, shots can essentially be split up into four types; rush shots, cycle shots, forecheck shots, and shots off a faceoff. Out of these four, the average shot off the rush is the most dangerous, meaning rush defence is a critical component of a defenceman’s game.
The most efficient way that a defenceman can defend the rush is by limiting controlled zone entries against. Carrying or passing the puck into the offensive zone with control is three times more likely to result in a scoring chance as opposed to dumping the puck in. Here’s a look at Edmonton’s defencemen, and how well they’ve defended the blueline: 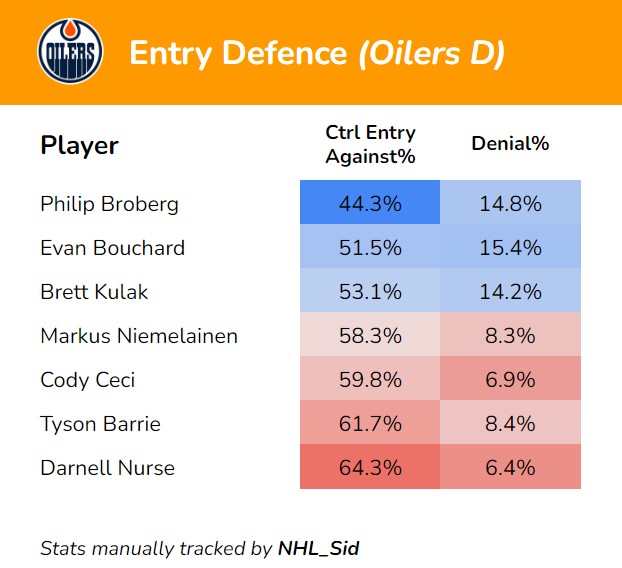 Note that the league-average controlled entry against% is roughly ~56%, and the league-average entry denial rate is ~10-11%. Forwards who’ve challenged Broberg at the blueline have entered the zone only 44% of the time and have been denied entry nearly 15% of the time. A defenceman that can consistently deny entries is extremely beneficial for this team, especially considering that the team’s 1LD in Nurse is quite inefficient at entry defence.
Broberg’s gap control has impressed me quite a bit. He’s been great at using his size and reach to limit the amount of space oncoming forwards have, forcing them to dump it in or turn the puck over. There was a video example above where he forced a dump-in, and here’s a few more plays:
Seattle tries to start a transition attack, but Broberg effectively shuts it down by knocking down Tolvanen’s (SEA #20) pass, and the puck exits the zone.
Here are two nifty zone denials by Broberg on Alex Killorn, both of which eventually lead to a zone entry for the Oilers.
Again, these aren’t pretty or flashy plays, but they can be effective at shutting down the transition.

With all of that said, Broberg has been very sheltered

According to PuckIQ, Broberg ranks last on the team in TOI% against elite competition, playing just 11% of his TOI against elites. He’s played just a total of 32 TOI against top lines. Woodcroft and Manson have done a splendid job at sheltering him and letting him gain confidence in a lower role.
In those 32 minutes, he ranks last on the team in relative DFF%. For comparison, his regular partner Evan Bouchard ranks 2nd on the team in relative DFF% against elites. Something to keep in mind.
In my experience and in the studies I’ve done, quality of competition doesn’t impact entry defence as much as you’d think it does (systematic play influences entry defence metrics more than any other factor), but it does heavily influence retrieval success rate, and I’d still expect Broberg’s entry defence metrics to regress in a higher role.
So while Broberg deserves praise for his performance thus far, his incredibly low quality of competition is a major factor in his play, and must be noted.
Still, Broberg has performed much better than the other D who’s played in that 3LD spot. In the games I’ve tracked for Markus Niemeläinen, he had a solid 52% retrieval success rate, but he led the team in failed zone exits per hour, alongside a mediocre 58% controlled entry against%. Ryan Murray had a 48% retrieval success rate, and ranked last on the team with a 64% controlled entry against%. Of course, the sample isn’t that large, which is why I didn’t include Murray and Niemeläinen on the lists above, but regardless, it’s something to note.
It’s safe to say that you can’t ask Broberg to play much better in the current role he’s been given, especially relative to the other players who’ve played in his role. The team is consistently tilting the ice the moment he steps on, and consistently out-scores and out-chances the opposition. I think he’s deserved more minutes and a larger opportunity.
If Broberg struggles in a second-pairing role and can only succeed in a sheltered environment on the third pair, I would still remain open to moving him for a player that can help the team win now. Does that mean they should simply give him away? Of course not, but dealing him for a strong top-four defenceman that can make a big impact this season should be a legitimate possibility to consider.
I have suggested trading Broberg+ for Chychrun in prior articles. My mind has started to shift on this, partially because of Broberg’s performance, and partially because of Chychrun’s declining defensive metrics ever since I wrote an article about him, which could be a red flag (I may do a second article diving into Chychrun near the deadline). Still, this possibility should remain a consideration.
However, if Broberg continues to perform well in a top-four role, that could significantly alter Edmonton’s plans for the trade deadline. It would lessen their need for a LD, and could shift the focus to acquiring a RD. In this scenario, I would move one of Ceci or Barrie, and try to pursue a reliable defensive partner for Nurse. Kulak’s on-ice metrics have declined in a 2LD role this season, so if Broberg can effectively play in the top-four, pushing Kulak down the lineup would be beneficial as well.
Another option in the event that Broberg excels in a higher role is to target a forward instead. This team lacks a natural finisher at RW (Hyman is technically a LW), and their 5v5 scoring could certainly improve for a team with McDavid and Draisaitl on it. Either way, it’s safe to say that Broberg’s potential performance in a higher role will have a major impact on Edmonton’s trade deadline plans.
Perhaps it may be difficult to significantly increase his minutes with 7D, and you could argue that the team shouldn’t make major changes while they’re winning, but at the least, I would gradually start giving Broberg tougher matchups. Edmonton’s next eight games are against Vancouver, Columbus, Chicago, Detroit (2x), Philadelphia, Ottawa, and Montreal. This is a much easier stretch of games with relatively weak opposition, and it seems like the perfect opportunity to increase Broberg’s role.
Broberg has excelled so far in a sheltered environment on the third-pairing, and to get a superior understanding of what Edmonton should do at the trade deadline, let’s gradually start seeing how well he can perform in a tougher role.
Find me on Twitter (@NHL_Sid)

Do you want to come with us to Toronto in March for an HNIC matchup that we’ll be watching in a suite? Of course you do. That’s why I’m telling you to sign up for the #NationVacation to T.O. and join us for a weekend that no one will soon forget. Check out the details you need right here.
Editorials
Featured
Oilers Talk
Recent articles from NHL_Sid