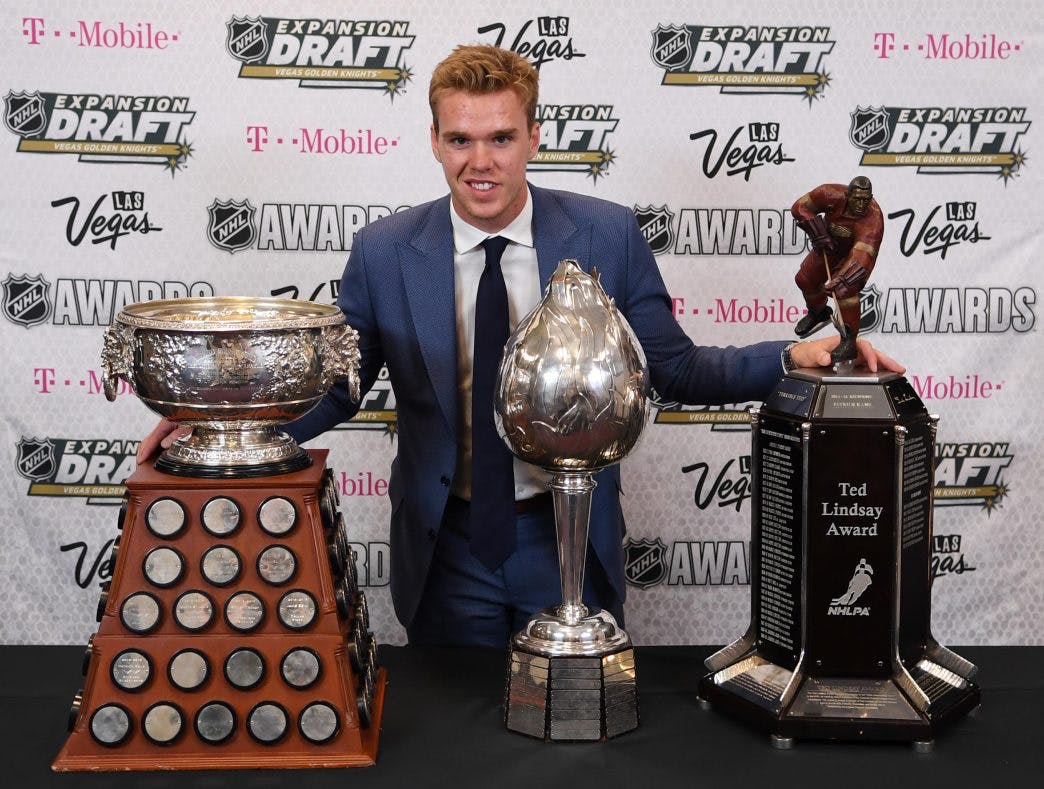 Who will win the Art Ross Trophy?

Who will win the Rocket Richard Trophy?

BaggedMilk: *Rewinds audio tape* Connor McDavid will not be stopped.
Cam Lewis: Connor McDavid has taken his goal-scoring to a new level. He’ll hit 60 and win the Rocket.
Zach Laing: Connor McDavid.
Nation Dan: Marks to Mr. Laing for picking Connor out of the gate. My pick of Kaprizov is only double digits back of the man who will win this… My guess is Connor McDavid.

Who will win the Hart Trophy? 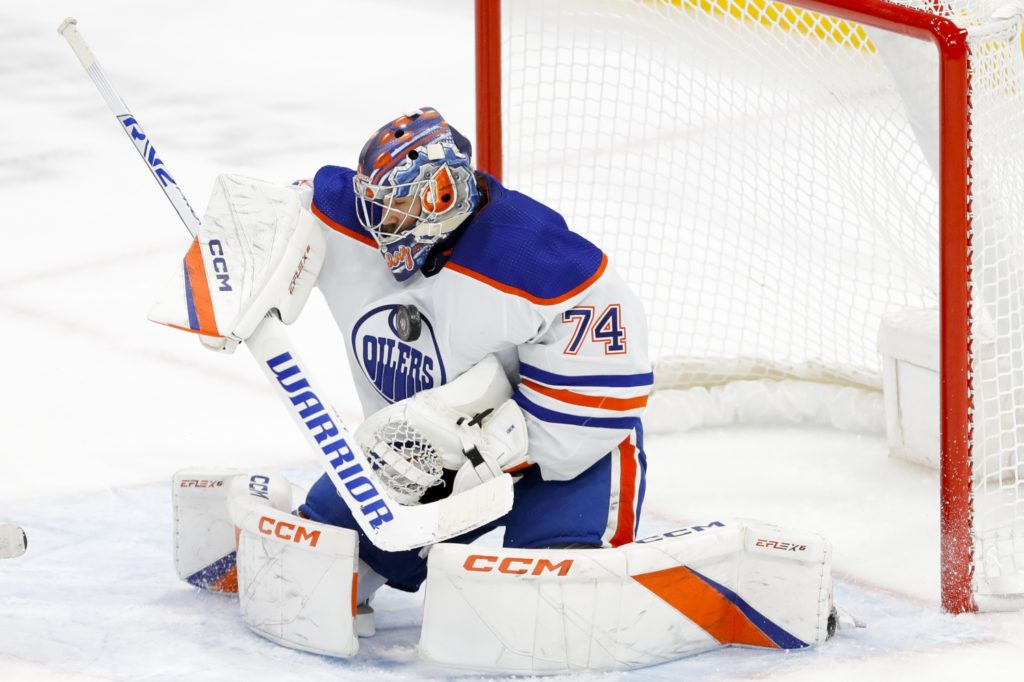 Who will win the Calder Trophy?

BaggedMilk: Stuart Skinner should win the Calder Trophy because of his moustache alone. Not only has he been stellar for the Oilers and basically stolen the starter’s job, but he also looks like Tom Selleck with that duster and you have to respect that.
Cam Lewis: There was a lot of thought that Dylan Holloway could become the first Oiler ever to win the Calder this year but Stuart Skinner is looking like the one who could do that. As much as I would love to see him do it, Owen Power is already playing like a No. 1 defender for the Buffalo Sabres, so that’s my pick.
Zach Laing: I’m going to go with Matty Beniers right now. He’s leading rookies in scoring and is having a tremendous rookie campaign.
Nation Dan: My preseason pick was Matty Beniers and I am going to stick with that pick.

Who will win the Vezina Trophy?

BaggedMilk: Stuart Skinner is going to have so many trophies that his dad will have to build him a special Billy Bookcase just to hold them all. If not Skinner then probably Mike Morrisson. He’s been great in the shootout.
Cam Lewis: How about another Connor? I figure it’ll be Hellebuyck in Winnipeg winning his second Vezina.
Zach Laing: Linus Ullmark. 19-1-1 record. .936 save percentage. 1.94 GAA. He’s a big, big reason why the Bruins are having the success they are.
Nation Dan: I hated to see my pick of Demko derailed due to injury. It’s hard to not just point to Boston and say… My guess is Linus Ullmark.

Who will win the Norris Trophy?

BaggedMilk: Many people would probably say Cale Makar but I’m going to go with Ryan Murray. His game is so steady you barely notice him out there.
Cam Lewis: Erik Karlsson looks like he could break the 100-point plateau, so that would be my first guess. If he can’t stay healthy, my guess is Hampus Lindholm, who’s quietly been incredible for the dominant Boston Bruins this season. What a trade that was.
Zach Laing: It has to be Erik Karlsson. While he’s slowed down a bit as of late, he’s still producing offence and driving play at a solid clip.
Nation Dan: I recognize that it’s likely Erik Karlsson’s award to lose at this point, but I like Dahlin as a dark horse to have a great second half. My Guess: Rasmus Dahlin. 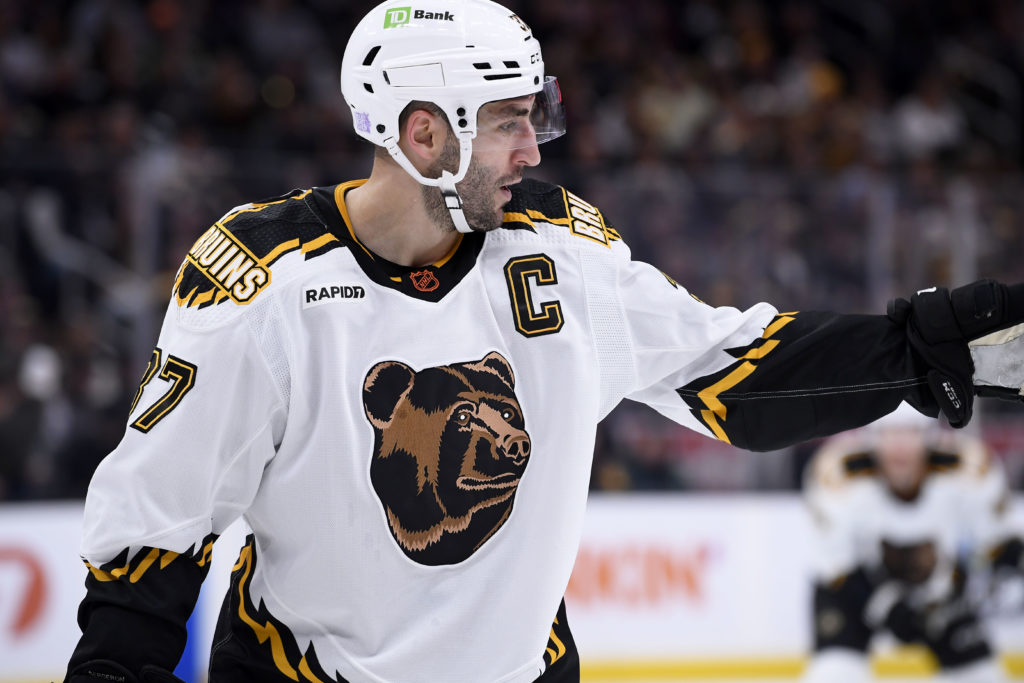 Who will win the Presidents’ Trophy?

BaggedMilk: The Oilers are the only team that matters and if they don’t win it then I hope no one does.
Cam Lewis: I’ll maintain my pre-season prediction that the Toronto Maple Leafs will have their best season ever and win the Presidents’ Trophy. We all know what happens after that.
Zach Laing: The Boston Bruins have a six-point lead over the Carolina Hurricanes and are eight points up on the Toronto Maple Leafs in terms of standings points. I want to say the Bruins will run away with it, but the Hurricanes will get back Freddie Anderson and Max Pacioretty sometime in the new year. I think they can regain that ground.
Nation Dan: The Boston Bruins may never lose a game in regulation at home again, so I can’t imagine going against them at this point. My guess is the Boston Bruins.

Who will win the Stanley Cup?

BaggedMilk: Oilers in six.
Cam Lewis: The Vegas Golden Knights will beat the Tampa Bay Lightning in seven games to win their first Stanley Cup.
Zach Laing: Anything can happen over the second half of the season, but let’s go with the Carolina Hurricanes over the Dallas Stars.
Nation Dan: The Edmonton Oilers will beat the Carolina Hurricanes in the Stanley Cup Finals and redemption over that bunch of jerks will be fuel for a summer to remember. The Oilers win in six.

Who will win the Conn Smythe Trophy?

BaggedMilk: [Reboots franchise] Connor McDavid will not be stopped.
Cam Lewis: Mark Stone’s excellent two-way play and clutch scoring will result in him being named as the playoff MVP.
Zach Laing: Max Pacioretty. He’s going to come back invigorated, be a point-per-game player down the stretch, and dominate in the post-season.
Nation Dan: Zach Hyman, paired with both Connor McDavid and Leon Draisaitl at various points during the Oilers’ 12 wins to find themselves in the finals. He scores the GWG and the ENG that seals the series in six on home ice.
Editorials
Featured
Recent articles from Cam Lewis