By baggedmilk
4 months ago
We’re getting to the point in the offseason when the news slows down to a crawl, but that doesn’t mean I don’t still have a few random thoughts rolling around in my head that I could use your help with figuring out.

In last weekend’s Random Thoughts, I wondered whether we would see Puljujarvi, Yamamoto, and the Oilers avoid arbitration and settle on new contracts before their respective hearings began. On Tuesday, Jesse Puljujarvi inked a one-year, $3 million contract ahead of his arb hearing, and with that bit of business out of the way, the question becomes whether Kailer Yamamoto follows suit. Right now, we’ve got a week and change until Yamo’s August 9th arbitration date, which is more than enough time to make something happen, and I’m very curious to see what a potential multi-year deal that Stauffer hinted at will look like. Is he getting more than $3 million/year on a multi-year contract? How much more? Could it be less than $3 million? Either way, once Yamamoto’s next contract hits the books, Ken Holland will have to make a move or two for the team to be cap compliant and that tells me that we’ve got some interesting decisions coming down the pipe over the next 74 days before the season gets going. My guess is that Yamamoto signs a three-year deal with an AAV of around $3.5 million. Place your bets.

THIS IS HOW YOU START, MATTIAS 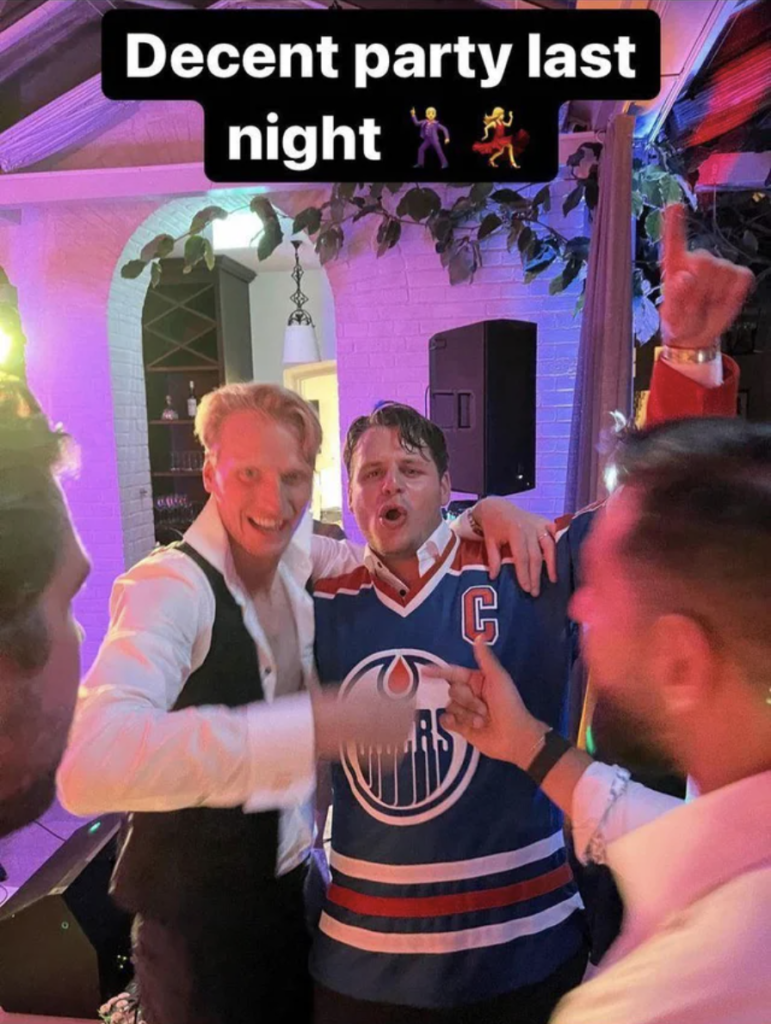 I know this picture of Mattias Janmark partying came out last weekend so it’s not exactly new, but I haven’t had a chance to write about it yet and felt like our new boy deserved a shout out. I mean, if you’re looking for a way to ingratiate yourself to a new fanbase, I can’t think of a much better way to get the job done than ripping it up in a McDavid (Gretzky?) jersey and posting the pics on your social media. Not only did Mattias clarify that the party was bumpin’ in the caption, but the look on his face says everything I needed to see. As much as I admittedly know very little about Janmark to this point, I do love me a Swede that isn’t afraid to wave his hand in the air like he just don’t care and that’s a pretty damned good start in my books.

ADIDAS OUT, WHO COMES IN?

This past week, news broke that Adidas would be out as the NHL’s apparel supplier after the 2023-24 season, bringing their tenure as the league’s official gear provider to an end after seven seasons. If you remember, Adidas replaced Reebok in 2017-18 after more than a decade since the NHL last changed providers, and that’s why I’m a little bit surprised that we already found out a split is coming even though there are two years left on the deal. Yet, despite parting ways with the clothing giant, the NHL issued a short statement to let us all know that both sides would continue to work together to make sure things run smoothly over this final stretch.

“The NHL and Adidas look forward to continuing to work closely together over the next two years and to a smooth transition to the new authentic NHL uniform supplier, which will be announced by the NHL at the appropriate time.”

From where I blog, I thought this relationship between Adidas and the NHL was a good one as both sides have been cranking out new variations of everyone’s uniforms over the past few years, leading me to believe that they were moving units. But since Adidas was reportedly spending nearly double the $35 million annual fee that Reebok had to be the NHL’s official apparel provider, maybe they were expecting more sales than they got? Either way, what will be interesting to follow over the next couple of years is who emerges as the replacement, and what that will mean for the look of our unis.
Would this be the opportunity Nike is looking for to run a clean sweep on all the North American sports? Will CCM jump in the mix? Someone else entirely? Place your bets.

KANE MADE ME LAUGH

Yesterday on Oilersnation Radio, we were laughing about Evander Kane popping in the comments with a simple “LOL” for Matthew Tkachuk’s intro presser in Florida when he basically said he was there to help the Panthers beat the Lightning. Even though he didn’t even say anything, the fact that Kane took a moment out of his day to troll a guy he basically erased in the playoffs was very entertaining to me. Not only do I think the NHL could use the players showing their personalities like this more often — everyone loves a villain, let’s be honest — but it’s also been forever since the Oilers have had a player like Kane that can not only get under your skin on and off the ice but back it up on the scoreboard as well. He’s basically what we hoped Lucic would be without looking like the NHL’s equivalent of Bowser in Mario Kart. Nevertheless, I had a good laugh when I saw Kane chime in on Tkachuk’s big intro down in Florida, and figured that all of you might like it as well.

BASEBALL ALSO MADE ME LAUGH

I know this last clip has nothing to do with hockey, but I couldn’t help but laugh out loud when I saw the St. Louis Cardinals broadcast team not saying a single word for nearly a minute after George Springer went yard on a grand slam this past week. For 53 seconds, not a word was spoken on the broadcast and I would LOVE to know what those boys were doing in there while nothing was going out on the air. There was no analysis, there was no commentary, there was nothing. I don’t know if these boys were just taking a break and enjoying the scene, or if they’re such homers for the Cards that the Springer dinger completely ruined their night, but this post-homer call (or lack thereof) had me howling and I just wanted to share with all of you in case you hadn’t seen the clip.

We’re getting into the quiet zone for offseason news so this week’s episode of Better Lait Than Never focused heavily on Jesse Puljujarvi’s new contract as well as a nice mix of shenanigans and feedback from the audience. As always, this podcast doesn’t work without all of you, and I very much appreciate the time you’re taking to join in on the nonsense. Subscribe to Better Lait Than Never for FREE on Spotify, Apple Podcasts, Google Podcasts, and wherever else you get your podcasts.
Nation Takes
Oilers Talk
Recent articles from baggedmilk