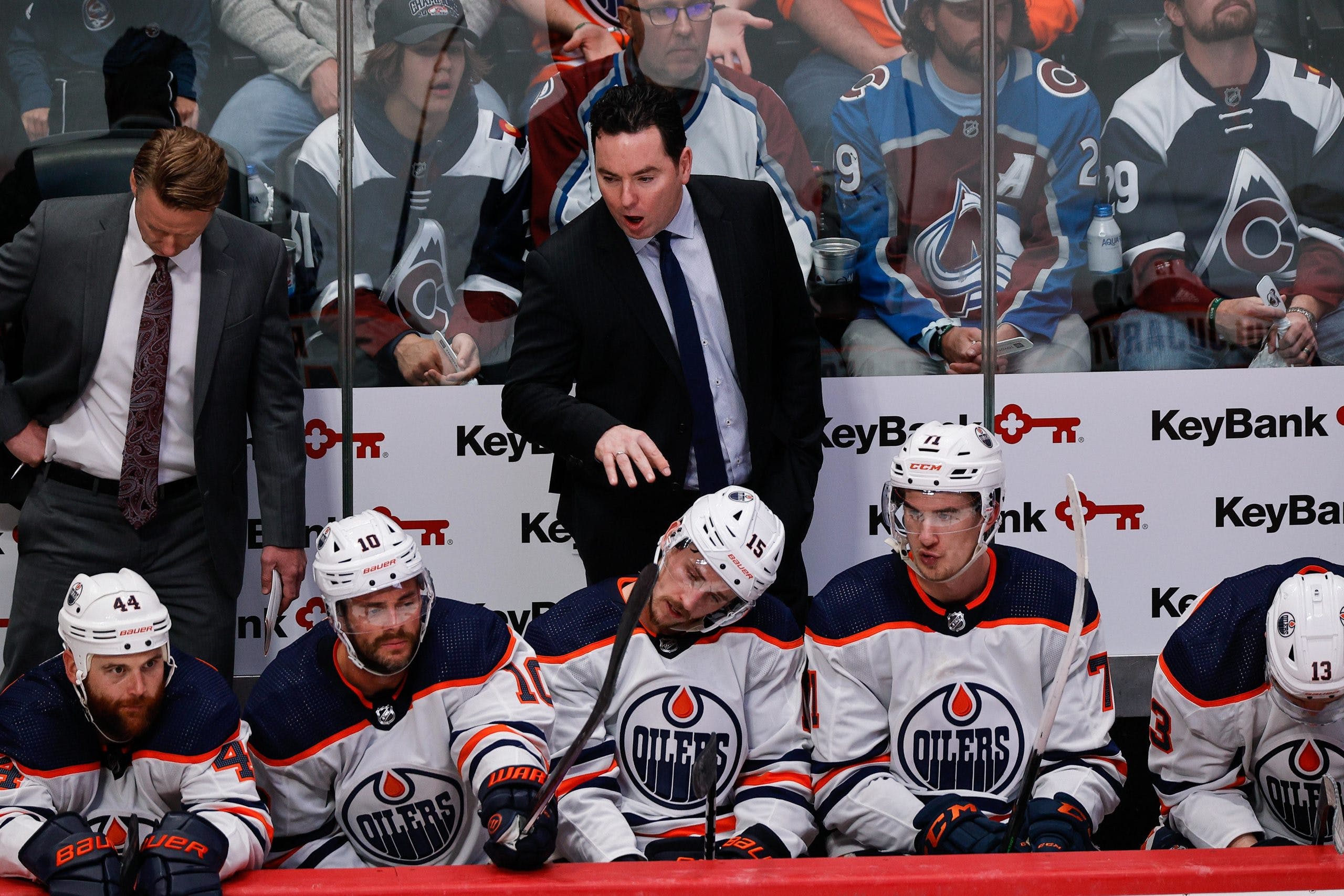 By Zach Laing
7 months ago
Jay Woodcroft isn’t going anywhere.
The Edmonton Oilers have locked up the head coach to a three-year contract extension.
The news should come as no surprise. The Edmonton Oilers were five points out of a playoff spot when they made the move to fire Dave Tippett and promote Jay Woodcroft to the NHL. After, the club went on an absolute tear.
Between Feb. 10 and the end of the regular season, the Oilers posted the league’s third-best record going 26-9-3 securing points in 72.4 percent of their games played.
Under Woodcroft, they looked like a completely different team. He took a roster of good players and made them great finding way to motivate and involve every last player in the game every single night.
From the time he was promoted to the time the regular season ended, the Oilers had the second-best record in the league. At 5×5, the Oilers controlled 52.63 percent of the shot attempts (8th), 56.02 percent of the goals scored (5th) and 52.60 percent of the expected goal share (10th).
The Oilers finished the season with a 49-27-6 record, good enough for second place in the Pacific Division, and earned a first-round matchup with the LA Kings. Down 3-2 in the series and on the brink of elimination heading back to LA for game six, the Oilers put on one of the best performances I’ve seen to win not only on the road, but to close it out on home ice in game seven.
Come the second round Edmonton matched up with the Calgary Flames in one of the most-hyped NHL series’ in a long time. And it was over as quickly as it started. Calgary jumped out in a wild game one beating the Oilers 9-6 only for Edmonton to respond with four straight wins.
Edmonton met their Goliath in their first Western Conference Finals appearance since 2006 pairing up against the Colorado Avalanche. Despite the games being closer than they appeared, Edmonton fell in four games.
All in all, it was a wildly successful season for the Oilers and it was clear all along that Woodcroft was the right man for the job. He initially joined the organization in 2015-16 as an assistant coach, a role he held for three years before he joined the AHL’s Bakersfield Condors as their head coach. With the Oilers’ minor league affiliate, they saw much success.
Under Woodcroft, the Condors posted a 105-71-12-9 record over four seasons winning a division title in 2018-19, and were the Pacific Division playoff champions in a COVID-shortened 2020-21 season.
Zach Laing is the Nation Network’s news director and senior columnist. He can be followed on Twitter at @zjlaing, or reached by email at zach@oilersnation.com.
Nation Takes
News
Oilers Talk
Recent articles from Zach Laing