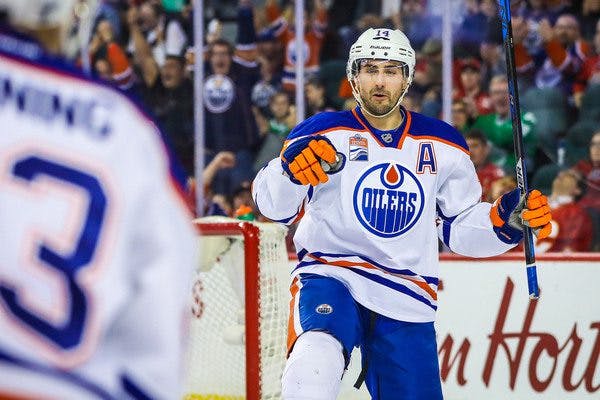 By Zach Laing
2 months ago
It’s been five years since the Edmonton Oilers traded Jordan Eberle for Ryan Strome.
And when you look at the rosters of both the Edmonton Oilers and New York Islanders, there are no remnants of the deal for either club.
The deal came down on June 22, 2017. The Oilers had just been bounced from the playoffs by the Anaheim Ducks in the second round of the playoffs. It was their first time in the post-season in 12 years — the fateful trip to the Cup finals.
That year, Eberle had a solid regular season. He scored 20 goals and 51 points in 82 games in the regular season. He didn’t quite score at the same rate he had in the past, despite taking a career-high 379 shots on goal that season. The volume was significant, but he shot just 9.6 percent.
Come the playoffs, it dried up completely.
He scored only two points in the Oilers’ 13 playoff games. He couldn’t buy a goal, let alone a point. He saw his time-on-ice dip, too, from 16:46 in the regular season to 14:32 in the playoffs. It was his first time ever in the playoffs, but that was no excuse.
Puck luck was a big issue for Eberle in his final days. Over his last two years at 5×5, he had an on-ice shooting percentage of 7.49, roughly one and a half percent below the league average. Come the 2016-17 playoffs? It plummeted to 1.28 percent — over eight percent below league average.
We’ve talked about shooting percentages and PDO in the past, and Eberle was a prime example for it. In his next playoff appearance in 2018-19 with the Islanders, he scored four 5×5 goals and had an on-ice shooting percentage of 9.23 percent. In the regular seasons since his departure from Edmonton, he’s regularly shot 12.7 percent — much closer to his career average, and well up from the 9.6 in his final season.
It was the Oilers inability to understand shooting percentages and PDO that led them to dealing Eberle for Ryan Strome. The latter got bit by similar issues in Edmonton. In the 2017-18 season, his first year with the Oilers, he scored 13 goals and 30 points, but the next campaign was a fall from grace.
The Oilers ended up trading him on Nov. 16, 2018 to the New York Rangers for Ryan Spooner. Heading up to that point, however, Strome had scored just one goal and one assist in 18 games. He was shooting a career-low 3.3 percent and an on-ice shooting percentage of 2.83.
After dealing him to the Rangers, Strome bounced back incredibly well the rest of the way. He scored 18 goals and 33 points in 63 remaining games, while his individual shooting percentage rose to 22.5 percent and his on-ice shooting percentage to 7.87.
Spooner, meanwhile, was a trainwreck in Edmonton. He scored just two goals and three points in 25 games with the Oilers and was dealt ahead of that year’s trade deadline. Coming back? The legendary Sam Gagner. Five goals and 10 points came from him before the end of the year.
The trade tree continued. The following year, two and a half weeks before the world shut down, the Oilers dealt Gagner and two second-round picks to the Detroit Red Wings for Andreas Athanasiou. We all know how that saga ended — with Athanasiou doing nothing and walking in free agency.
In Eberle, the Islanders got a strong forward for four years. In 272 games, he scored 76 goals and 169 points for a .62-point per-game pace — just below the .75 points per game he scored in Edmonton.  The Islanders, however, would lose Eberle to the Seattle Kraken in their expansion draft.
All in all, the Eberle trade was a disaster for the Oilers. Edmonton sold low time and time again through the whole trade tree and truth be told — with the way not only Eberle but Strome responded — the Oilers could use players like them right now.
Zach Laing is the Nation Network’s news director and senior columnist. He can be followed on Twitter at @zjlaing, or reached by email at zach@oilersnation.com.
Featured
Nation Takes
Oilers Talk
Recent articles from Zach Laing