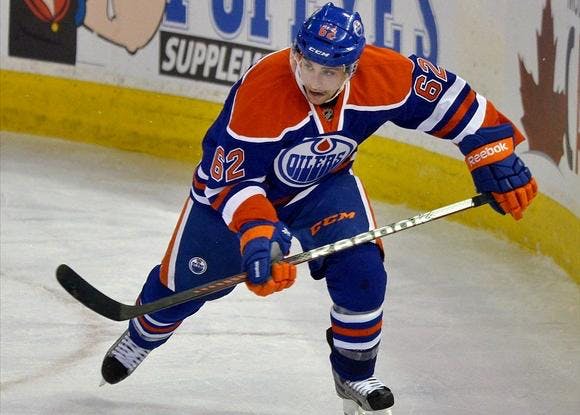 By Zach Laing
1 month ago
It’s been almost eight years to the day the Edmonton Oilers traded Mark Arcobello and I’ve wept nearly every day since.
Okay, maybe not, but Arcobello quickly became a fan favourite around these parts despite playing just 78 games with the Edmonton Oilers.
Undrafted, Arcobello had himself quite a career in the NCAA at Yale University. He appeared in 131 games over four years scoring 49 goals and 116 points. The playmaker was a key cog during Yale’s 2008-09 season leading the team in scoring en route to an NCAA championship leading the team in scoring.
After his senior year, the Oilers’ AHL affiliate, the Oklahoma City Barons, signed him to a contract on Sept. 27th, 2010. He had a tremendous first year in the organization. He scored seven goals and 20 points in 33 games in the ECHL and another 11 goals and 22 points in 26 AHL games.
The following April, he earned a two-year, entry-level deal with the Oilers. Arcobello got his first taste of NHL action in 2013-14 breaking in with the Oilers. He appeared in 41 games scoring four goals and 18 points, and in 2014-15, he scored seven goals and 12 points in 36 games for the Oilers.
He was never a tremendous player by any sense of the term, but he was quietly a very effective player on some, well, god-awful teams. He drove play at rates well above the rest of the team average, and his ability to chip in-depth scoring was nice. He was a physical player and killed penalties, and that’s about as much as you can ask for for a cult hero Edmonton Oilers player.
On Dec. 29th, 2014, the team traded him to the Nashville Predators, who the Oilers play tonight, in exchange for Derek Roy. Roy played out the rest of the season in Edmonton before retiring, and at the time he helped bring out some of the best play that we saw out of Nail Yakupov during his time in the NHL.
Arcobello, meanwhile, ended up with the Pittsburgh Penguins and Arizona Coyotes before the end of the season. In 2015-16 he signed with the Maple Leafs organization appearing in 20 games with the big club, but scored 25 goals and 59 points in 49 with their AHL affiliate, the Toronto Marlies.
He left North America for the Swiss League, and he’s had a ton of success over there. In 2016-17, his first of four years with SC Bern, he scored 25 goals and 55 points in 50 regular season games and another eight goals and 20 points in 16 playoff games as Bern won the championship. He led the league in scoring and was named league MVP, best forward and the media’s MVP. He won another championship with Bern in 2018-19.
Arcobello’s spent the last three years captaining HC Lugano and has five goals and 15 points in 26 games this year. His teammate this year is former Oilers goaltender Mikko Koskinen, who has posted a 10-11-2 record, a 2.47 GAA and .919 save percentage.
Zach Laing is the Nation Network’s news director and senior columnist. He can be followed on Twitter at @zjlaing, or reached by email at zach@oilersnation.com.
Editorials
Nation Takes
Oilers Talk
Recent articles from Zach Laing