By Cam Lewis
7 months ago
Though there’s talk that Kailer Yamamoto or Jesse Puljujarvi could be traded this summer, we can say for certain that both players along with Ryan McLeod will be issued qualifying offers by the Edmonton Oilers.
Those are Edmonton’s main restricted free agents, but what about the other ones?
Two of the Oilers’ RFAs have already inked deals overseas, as defender Filip Berglund and winger Ostap Safin have decided to sail on, so Ken Holland and Co. will have decisions to make on two middling players ahead of the deadline to qualify players on July 11. Brendan Perlini and Tyler Benson are forwards with draft pedigree and impressive AHL numbers who have yet to figure it out at the NHL level. Will they be back? 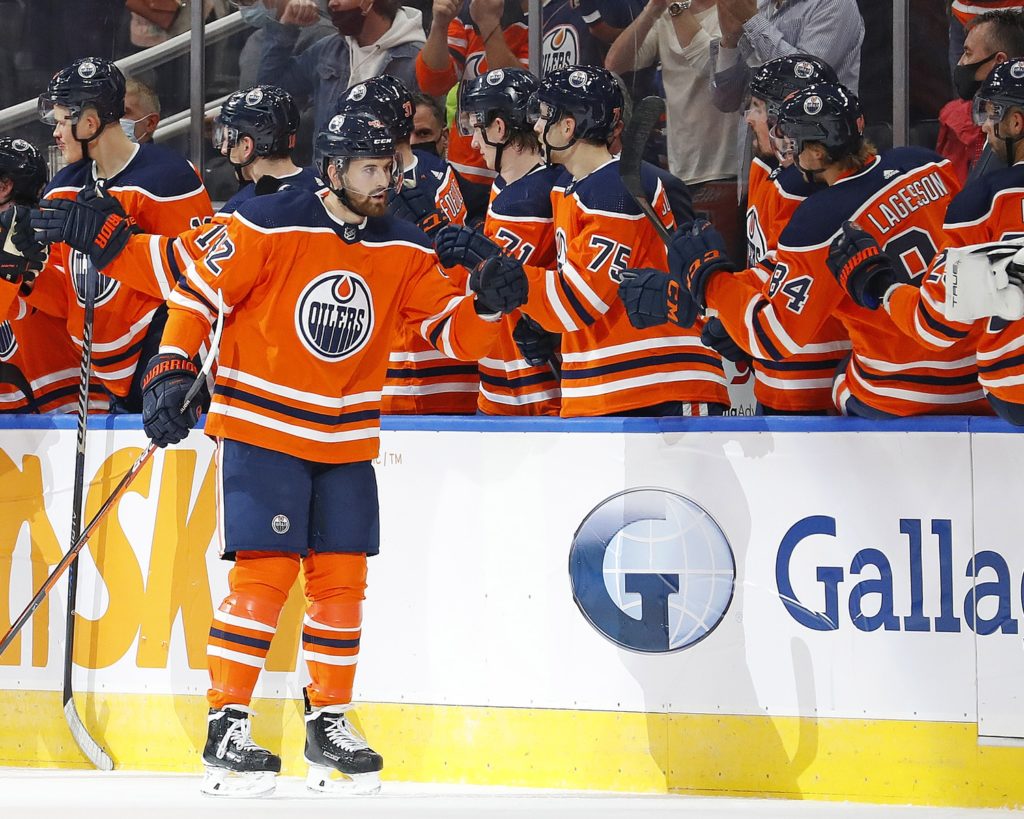 When the Arizona Coyotes selected Brendan Prelini with the No. 12 overall pick in the 2014 draft, he appeared to be a slam-dunk prospect, as he featured a big body, strong skating, and an ability to score goals. In his first season as a professional in 2016-17, Perlini scored 14 goals in 17 games in the AHL, earned a call-up, and scored 14 goals in 57 games in the NHL.
Since that rookie season, Perlini hasn’t been able to establish himself at the NHL level. He scored 17 goals in 2017-18 and was then part of a mid-season trade in 2018-19 that sent Jordan Schmaltz to Arizona and Dylan Strome to Chicago. Perlini scored 12 goals in 46 games for the Blackhawks after the trade but then couldn’t get into the lineup in 2019-20 and requested to be moved.
The Detroit Red Wings sent Chicago Alec Regula, a quality defensive prospect, to give Perlini his change of scenery. Since it involves Detroit, it’s important to note that this was a Steve Yzerman deal, as Ken Holland had already joined the Oilers by this time.
Perlini scored one goal in 39 games with the Wings and wasn’t given a qualifying offer. He went overseas and spent a season in Switzerland’s top league and scored nine goals and 16 points across 21 games. The Oilers gave him a one-year deal, two-way contract the following summer.
The Lamborghini got a lot of hype in training camp, as Perlini scored five goals in five pre-season games, but much like with Ty Rattie and others in the past, the performance didn’t translate to the regular season. Perlini scored four goals in 23 games and possibly the most memorable part of his season was when his mom said that she saw on Twitter that he had been waived before the team told him the news.
Perlini did well with the Bakersfield Condors, as he scored 11 goals and 18 points in 18 games, but he didn’t get another look with the big league club.
Given his draft pedigree and talent, somebody will surely give Perlini a look in the NHL next season, and it wouldn’t be a mistake for the Oilers to bring him back as a depth player. But there are names like this floating around in free agency each summer and it wouldn’t be a surprise for the Oilers to let Perlini go and take a flyer on somebody else.

The Oilers made a controversial decision with the No. 32 overall pick in 2016. Rather than going with Carter Hart who would have fit an organizational need or Alex DeBrincat who thrived playing alongside Connor McDavid in the OHL, the Oilers opted to select Tyler Benson, a highly-touted local product whose career had been slowed due to injuries.
It wasn’t a totally off-the-board pick, as Benson was ranked as high as No. 14 overall heading into the draft, but the concern was that the Oilers were getting swept up in the hype of a local prodigy. Benson set the Alberta Bantam AAA scoring record in 2012-13 when he scored 57 goals and 146 points in 33 games. He went No. 1 overall in the WHL Bantam Draft the following spring.
Benson had a strong rookie year with the Vancouver Giants, as he scored 14 goals and 45 points in 62 games, but his draft season was derailed due to injury, and he scored just 28 points in 30 games. Despite that, the Oilers leaned in and took him with their second pick in the draft.
The problems with Benson on his draft day are the same problems that are holding him back from becoming a regular NHL player six years later. While he boasts incredible vision and playmaking talent, Benson doesn’t have the skating ability to keep up with a fast-paced game at the NHL level.
Benson cracked the Oilers out of training camp due in part to him being waiver-eligible. He came in and out of the lineup, was seldom used outside of a fourth-line role, and scored one goal and one assist over 29 games before getting placed on waivers in March. Though he worked hard to carve out a role as an agitator, Benson never got himself much runway on a skill line under either Dave Tippett or Jay Woodcroft.
Last summer was the end of Benson’s entry-level deal and he came back on a one-year deal worth $750k. He’s again a restricted free agent and it’s difficult to say if the Oilers are willing to commit another year to seeing if Benson can find a role in the NHL.
Beyond where he might fit on an NHL roster, the Condors might also be too loaded on the wings for Benson to be back. AHL veterans James Hamblin, Luke Esposito, Seth Griffith, and Brad Malone are in the mix, Raphael Lavoie will be looking for a larger role, and the team will see an influx of young talent as Carter Savoie, Tyler Tullio, Xavier Bourgault, and possibly Matvei Petrov will be turning pro.
Tyler Benson has proved everything he can in the AHL and if the Oilers aren’t interested in giving him a good look as an NHLer in a role that suits his skillset, they’re best just cutting ties and giving him a chance to catch on with another organization.