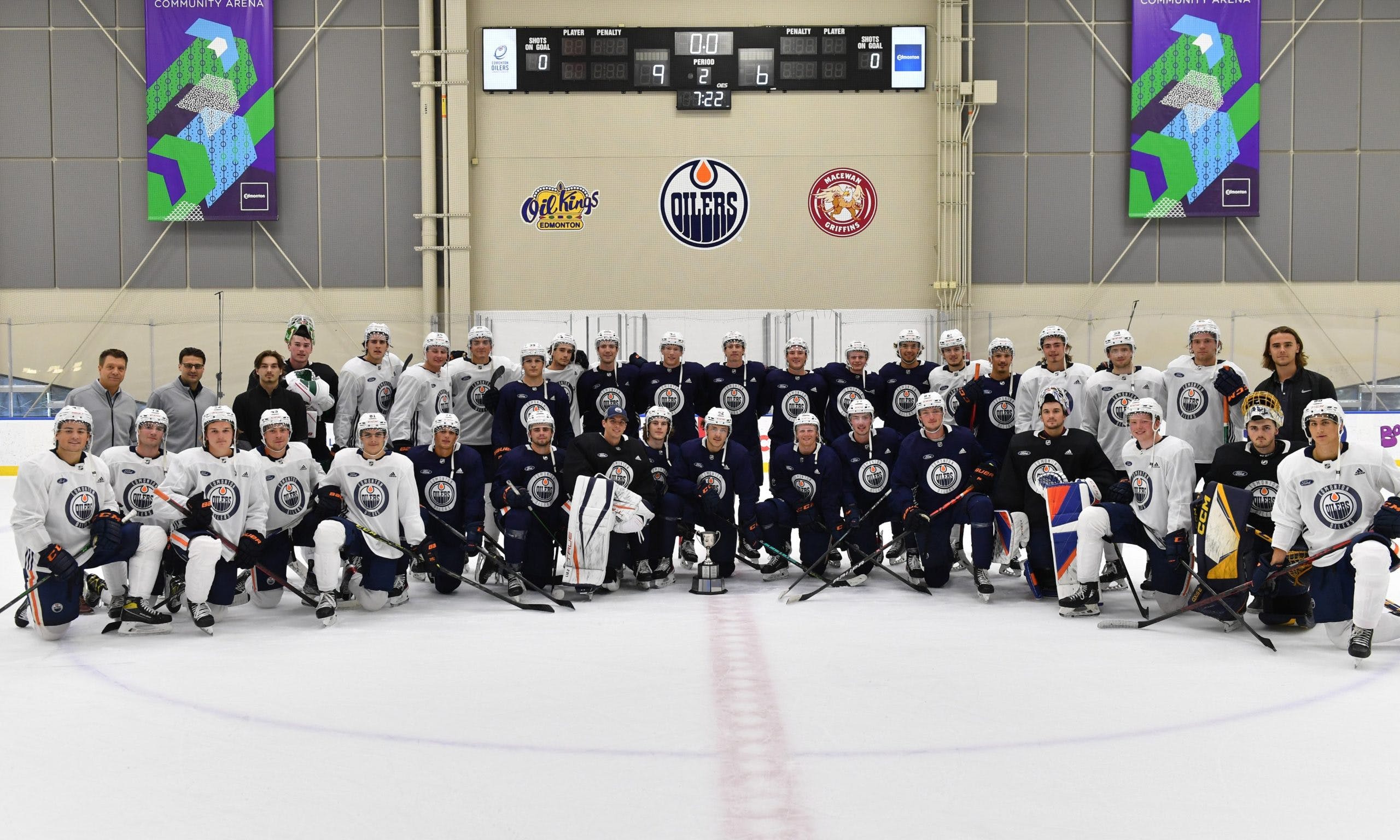 By Liam Horrobin
6 months ago
The Edmonton Oilers rookie development came camp came to a close Thursday night with a slew of young players attending.
They were draftees, ones that played pro with the Bakersfield Condors, to a few undrafted and college free agents. After a week of on-ice drills, fitness testing and team building, the prospects took to the ice on Thursday night to play for the Billy Moores Cup. In the end, it was Team Blue walking away with a 9-6 win.
Unfortunately, two players that did not participate were 2021 first-round pick Xavier Bourgault and Raphael Lavoie, their second-round pick from 2019. The Athletic’s Daniel Nugent-Bowman reported earlier in the week that the two had picked up injuries and would not take part for the rest of the week.
Even with those two on the sidelines, the Oilers still had plenty of talent on the ice, including 2022 first-round pick Reid Schaefer.

Despite what the score may reflect it was Ryan Fanti, a 22-year-old goaltender the Oilers signed last season from the University of Minnesota-Duluth, who stole the show. Early in the game, he denied Carter Savoie from point blank and later on a penalty shot. As the game went on, Fanti stood his ground when Noah Philp came bursting in one-on-one and turned his shot aside. He was beaten twice in the period by Jackson Pierson after an excellent feed from Savoie. And then, shortly after a penalty shot miss, Savoie had his revenge on Fanti, using a screen to beat him in the slot.
At the other end of the ice, it was not a pretty tale for 2018 second-round pick Olivier Rodrigue. Team White scored three goals in the first period, which were all stoppable. Shane LaChance scored the first with a weak five-hole goal. Ty Nash did make a great play off the wall to send LaChance in on a breakaway, but the goal was preventable. Rodrigue then dropped a rebound right onto the stick of Adam Hall to make it 2-1. Then, Jake Chiasson scored far side over the glove from a tight angle. It is safe to say the Oilers and Rodrigue won’t be happy with the performance.
Samuel Jonsson and Charles-Antoine Lavallée came in for the second half of the scrimmage. The two of them played well in the five-on-five portion; however, once the game went to three-on-three, the ice opened up and the offence started to flow.
James Hamblin got involved with much of that offence in the game’s final quarter. He showed his experience with the puck a few times with great poise and vision. His Bakersfield teammate Darien Kielb had a standout performance from the Team White blueline. He was active in the attack and drove the play a lot.Kielb could be set for a breakout season in Bakersfield with holes opening now that Phillip Broberg is with the NHL team. The Oilers signed him from Dalhousie University last season, and in seven-game with the Condors, he had six points.
Carter Savoie’s talents, meanwhile, were on full display. Aside from his goal and assist, Savoie showed what he could do away from the puck by stripping it from his opponent and pressing hard on the forecheck. He’s an intelligent player who can create something out of nothing, making him dangerous under any circumstances.
The one player that everyone had their eyes on was Reid Schaefer. The Oilers first-round pick from this year found the net in the second half showing great patience to outwait Jonsson and take the puck around him. It quickly became a part of how he scored 33 goals last season. His shot is a deadly one. Similarly to Savoie, he comes with a great stick off the puck, getting it into lanes and stealing the puck away. It is traits like those why the Oilers drafted him so highly. Schaefer struggled to separate himself using his feet, and did not create much with the puck early in the scrimmage. However, he seemed to grow more comfortable once he got that shot away.
Tyler Tullio played well and got himself involved offensively. On the broadcast, Bob Stauffer mentioned many times that Tullio needs to revamp his game if he wants to play in the NHL. He specifically noted that Tullio needs to become more of a bottom-six player.
Also, Matvey Petrov shined more and more as the game went on. He is quick with the puck and can dictate the game’s pace. An interesting note was dropped on the broadcast about Petrov. Since he was not playing in the CHL when he was drafted, the Oilers can send him to Bakersfield next season if they so choose. This is unlikely because North Bay will compete for the OHL championship; however, the option is there for Edmonton. He’s a prospect we should all be excited for.
The NHL team fills the holes with undrafted/unsigned players at these camps. The Oilers had a few this season, including Adam Hall from the Vancouver Giants. Hall is an Edmonton native who played 112 games in the WHL and 40 in the AJHL with the Spruce Grove Saints. He had a fantastic game and was arguably one of the best on the ice. Hall had two goals with his second possibly being the goal of the game after he fired the puck top shelf over Jonsson. It felt like every time he was on the puck something good happened. Again, on the broadcast, they said he would stay in Edmonton to play for the University of Alberta Golden Bears next season. Could he be the next Noah Philp?
Other camp invites that stood out were Noah Ganske from the University of Wisconsin-River Falls and Ty Nash of the Lethbridge Hurricanes.
Overall, fans should be happy with what they saw on the ice tonight. The Oilers have plenty of talent stashed away in Bakersfield and in junior leagues around the world, which will help them down the low. Next up for the rookies is the Young Stars Classic in Penticton this September.
Nation Takes
News
Oilers Talk
Recent articles from Liam Horrobin