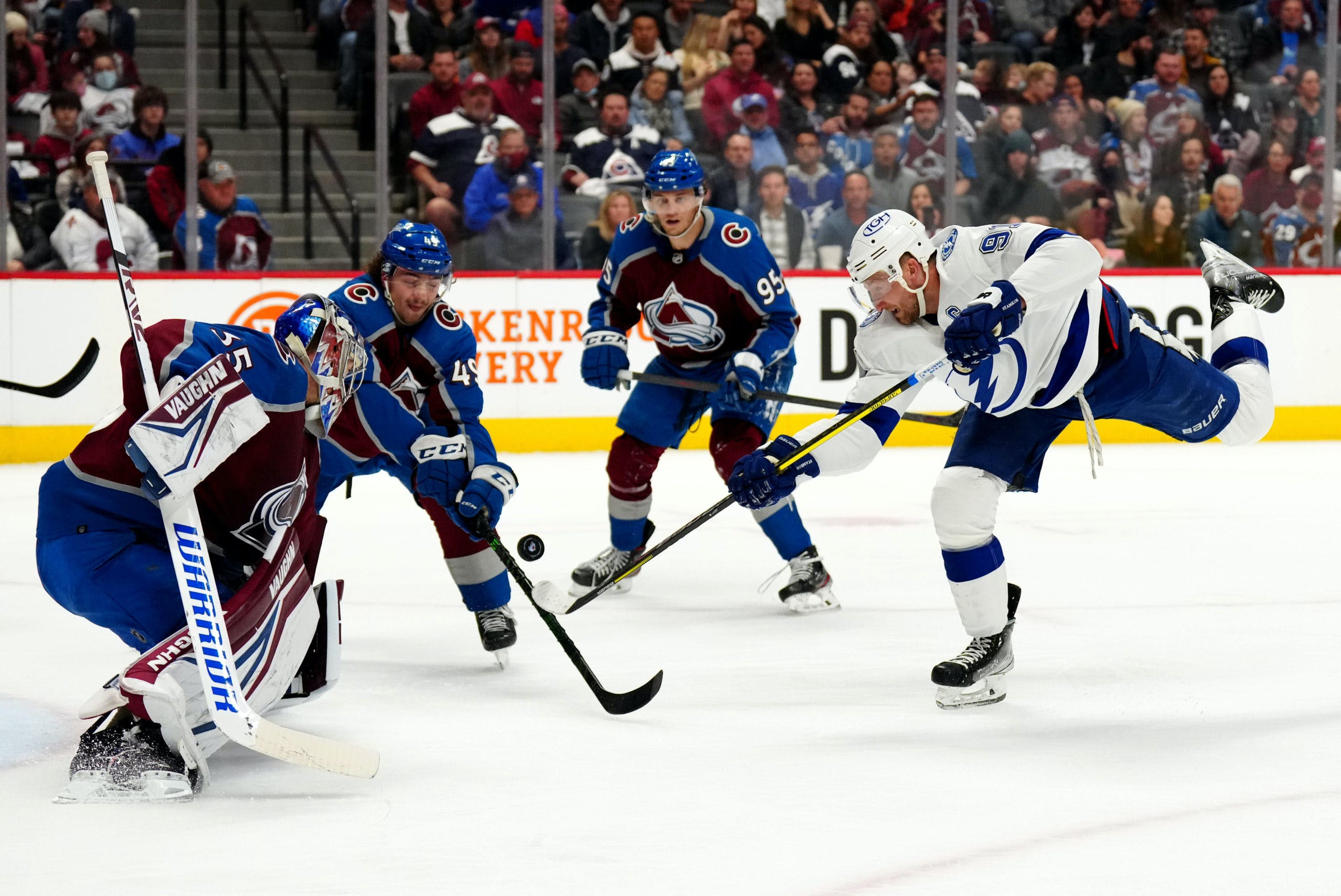 By Zach Laing
5 months ago
The debate is truly over.
There’s no more arguing about if analytics are a useful tool in hockey. Not that there was much to argue anyway given that every team in the league employs analytics staffers in some sense of the term.
The Athletic’s Shayna Goldman has documented such moves. 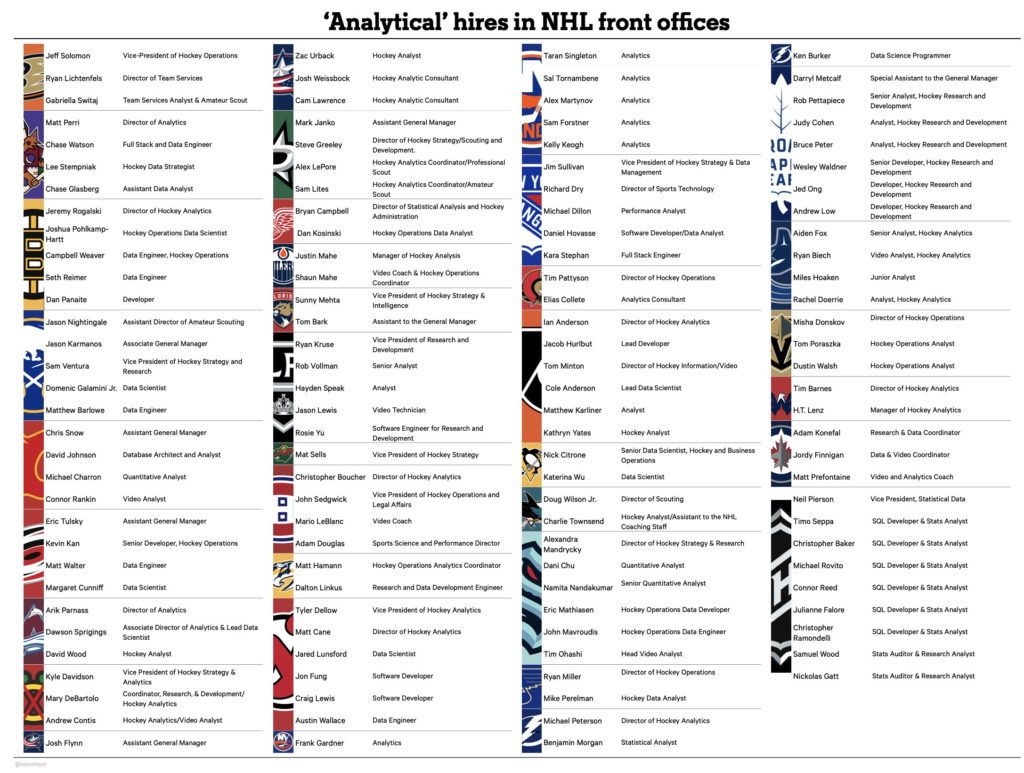 And tonight, we get to see two of the early adopters of analytics — the Tampa Bay Lightning and the Colorado Avalanche — play for the Stanley Cup.
Both of these teams are actively using analytics when it comes to how they make decisions in everything from draft preparations, to free agency, to trade proposals and even for solving their cap problems. For the Tampa Bay Lightning, they got into the world of analytics in 2009 when they hired Michael Peterson, a 38-year-old mathematics and computer science major.
“It was nowhere near where it is today,” Tampa Bay Lightning general manager Julien BriseBois told The Athletic. “And even today, we’re nowhere near where we are going to be in the future. It’s still evolving and continuing to grow. What shape or form that takes, I’m not sure. The role of critical intelligence, player tracking, puck tracking, that’s all coming. We’ll get a better appreciation for the role that data can play in those tools, can play in hockey management.
“If you go back 10 years, probably most teams didn’t have anyone like Mike. The previous regime was ahead of the curve in that regard. Over time, we’ve just been developing more and more projects for him to work on, and over time he’s developed certain expertise and appreciation for the game. We challenge each other.”
Another great quote from BriseBois in the aforementioned article was about how they just view analytics as a form of information. A piece of the puzzle, but not the be-all-end-all in
“Generally speaking, when people refer to analytics, the acceptance of that information being valuable is no longer in dispute,” he said. “I’m sure every team is relying on statistics to a certain extent.
“I would have a hard time finding an area where (Peterson) or his department are not providing us with some sort of information. Most of the time we’re looking for information, we add it to other information we have from other sources and help paint the picture. They’re not in opposition, it’s more complementary to help us make better decisions. It might challenge our assumptions or it might help us dig deeper to validate assumptions.”
And in Colorado, you can bet the same. Arik Parnass was the big hire that broke them into the world of analytics. Parnass got his start in the field after completing coursework in statistics and programming which led to him being hired at Hockey Prospectus, a cutting-edge site in the mid-2010s that helped bring “fancy stats” to the forefront.
No matter what your stance is, you can no longer bury your head in the sand when it comes to applying this type of information to hockey. Say what you will, but in a billion-dollar industry, franchises are doing whatever they can when it comes to trying to find a way to get a step ahead.
Both the Lightning and Avalanche have been among the strongest in the league when it comes to their underlying analytics.
Here’s a breakdown of some of their core numbers, and league ranks, at 5×5 over the last three seasons:
These teams have both been at the tops of their games for a number of years and it’s no coincidence they’ve had the regular-season success they have had. The implementation of the additional information has swayed them to not only build a team that can control the pace of play, but can win, too.
Tampa Bay’s been built for success. They’re the two-time defending cup champs, after all. Colorado has been built in a similar way, but have had some less than fortunate fates come the post-season in recent years.
One thing I think is interesting too is that these teams haven’t solely been built on analytics. Tampa Bay, for example, has valued guys like Corey Perry, Pat Maroon and Pierre-Edouard Bellemare — players who while they have good underlying numbers, bring another element on the ice with their leadership and physical play. Other guys like Zach Bogosian and Ryan McDonagh, both players whose numbers have struggled, log big minutes because of the other elements of their game in their own zone.
Targeting a guy like Nick Paul at the deadline has paid off dividends. While his underlying numbers were far from great in Ottawa, Tampa identified him as a guy with a low PDO and took the bet that his game could improve in a different situation.
Colorado’s made some similar moves in their roster construction. Artturi Lehkonen, for example, was brought in mid-year and was an analytics darling on a bad Montreal Canadiens team. He’s played steadily in Colorado’s top nine and has continued to do a strong job of controlling play. But other moves like giving Jack Johnson and Josh Manson, two poor analytics players, continued ice-time shows they value their physicality in their own zone.
The point of it all being while both of these teams have been built through analytics, it’s just another tool in the toolbox to be used.
For years now, the Edmonton Oilers have been behind the eight-ball when it comes to their analytics usage and it’s time for them to progress into the modern era with it. It doesn’t need to be their be-all-end-all for analysis, but I would encourage them to utilize it more when it comes to decision-making.
Zach Laing is the Nation Network’s news director and senior columnist. He can be followed on Twitter at @zjlaing, or reached by email at zach@oilersnation.com.
Nation Takes
News
Oilers Talk
Recent articles from Zach Laing