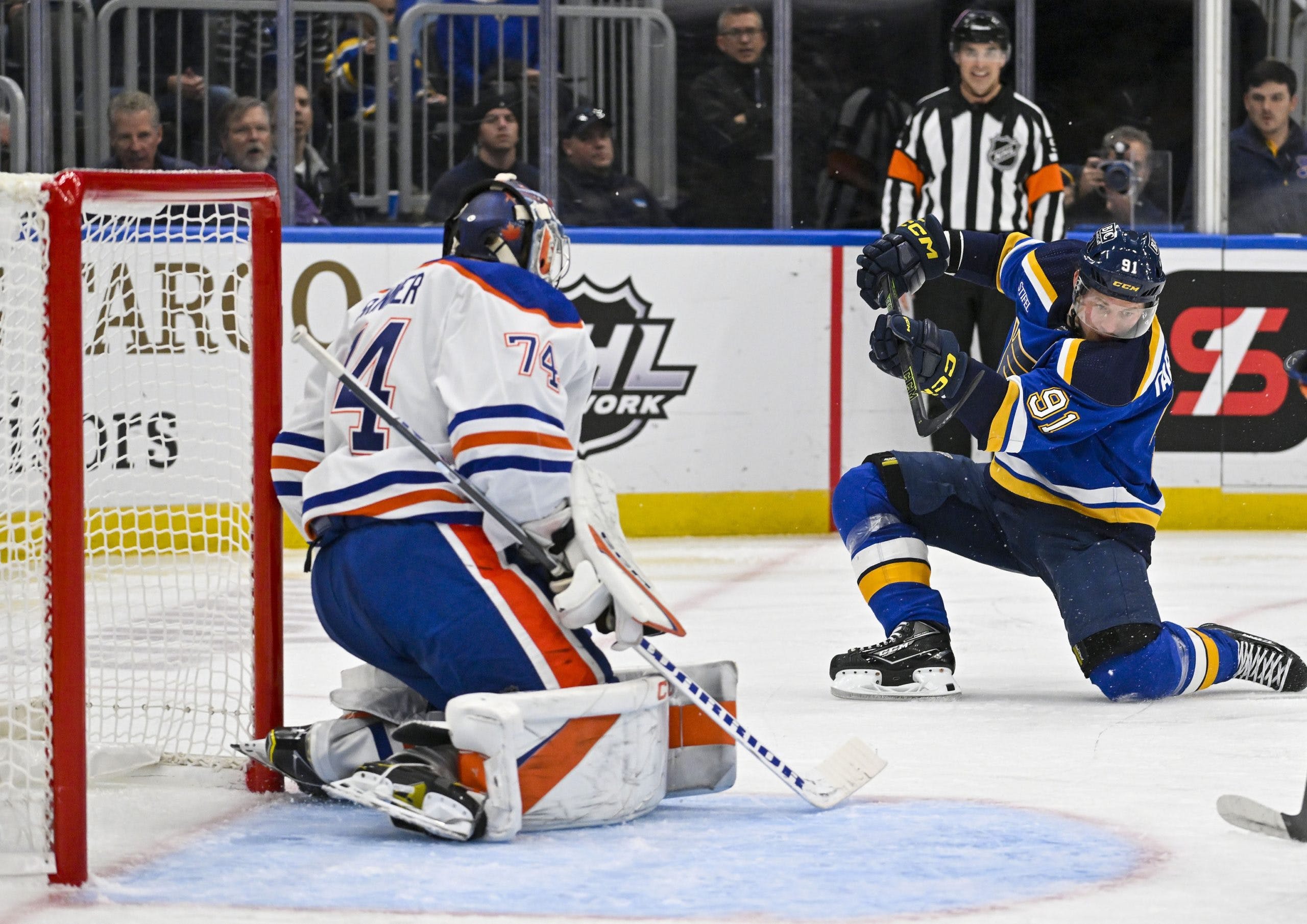 By Robin Brownlee
1 month ago
On a night when the anthemist provided as wretched a version of the Star-Spangled Banner as I’ve heard in a while, Stuart Skinner hit all the right notes to backstop the Edmonton Oilers to a 3-1 win over the St. Louis Blues. Quite a juxtaposition it was.
With the anthems mercifully done in the Show Me State, the 23-year-old stopper from Edmonton made 37 saves on 38 shots in his second start and third appearance of the season to bump the Oilers to 4-3-0 heading into Chicago to face the Blackhawks tonight.
Ryan Nugent-Hopkins’ 200th career goal stood as the winner, Jesse Puljujarvi scored his first goal of the season on a deflection to open the scoring and Zach Hyman closed the deal scoring into an empty net, but it was Skinner, playing in tandem with Jack Campbell as his back-up, who was the story.
While it’ll be Campbell getting the crease against the Blackhawks tonight, Skinner will be sitting at the end of the bench cheerleading with a 2.56 goals-against average and a .957 save percentage. This is exactly the kind of progression in performance the Oilers were looking for after Skinner’s 13 appearances behind Mike Smith and Mikko Koskinen last season. 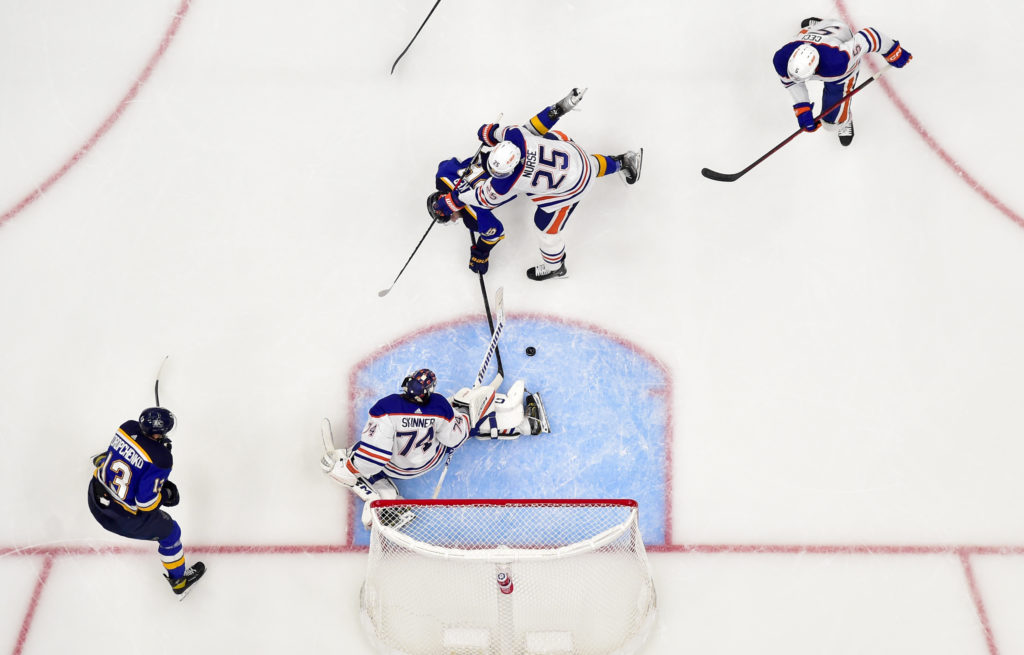 Oct 26, 2022; St. Louis, Missouri, USA; Edmonton Oilers goaltender Stuart Skinner (74) and defenseman Darnell Nurse (25) defend the net against St. Louis Blues left wing Nathan Walker (26) during the third period at Enterprise Center. Mandatory Credit: Jeff Curry-USA TODAY Sports
“It feels good obviously, but I don’t want that to get in the way of how I’m playing,” Skinner said of his impressive numbers to start to the season. “I felt excited to play obviously being the first time I was able to play the Blues, so really exciting and a super cool moment. I thought the guys played a fantastic game. I thought we all played really well and we just worked for each other. I’m happy that we got the first road win.”
Coach Jay Woodcroft has watched Skinner, who is the youngest of nine children and will celebrate his 24th birthday on Tuesday, develop since the 2018-19 season when he coached him in Bakersfield. The quality of performance he got from Skinner last night wasn’t a big surprise to the coach.
“Nobody expects games like that more than Stuart Skinner himself,” Woodcroft said. “For me, having had a relationship with him over the last four or five years, I’ve seen him grow and I continue to see him grow. He’s trying to stake a claim to play as many games as he can in what is his first true first year in the NHL. He’s got the confidence of his teammates and certainly the confidence of his coaching staff.”
As a matter of perspective, by the time Skinner played his first pro season with the Wichita Thunder of the old ECHL and Bakersfield in 2018-19, Nugent-Hopkins was already in his eighth season with the Oilers. Skinner was a fan of Nugent-Hopkins then and remains so today – he’s just got a better seat.
“He’s an amazing guy, an amazing player,” Skinner said. “I grew up watching him. I’ve told him a couple of times I was the guy in the crowd going, ‘Nuuuuuuge’ every time he got a goal or an assist, so it’s pretty cool being his teammate now.”

Keeping in mind the Oilers are just seven games into the season as they face the Blackhawks, there was a lot to like about last night’s win. The Oilers beat a very good team in the Blues. I thought the line of Puljujarvi, Warren Foegele, and Ryan McLeod was very good again. Hyman and Nugent-Hopkins continue to play well.
At the top of the list was seeing Skinner grabbing an opportunity presented to him and running with it – again.
Editorials
Featured
Oilers Talk
Recent articles from Robin Brownlee