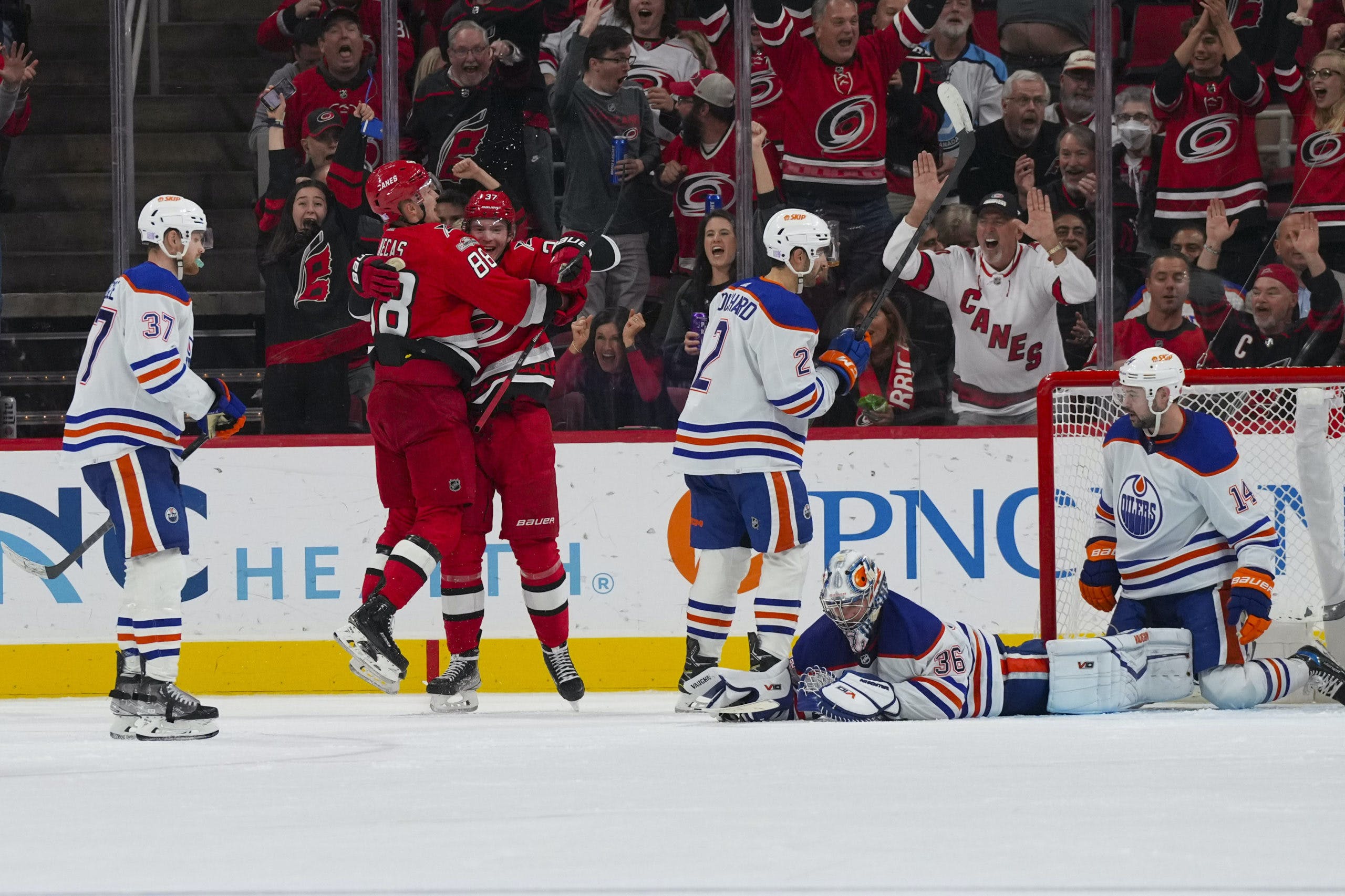 By Zach Laing
19 days ago
The Day After is brought to you by NHL odds site Betway!
The Edmonton Oilers inability to string two good games together bit them Thursday night.
On the road in Carolina, it was a putrid effort from the Oilers two nights after a big, 3-2 character win against the Tampa Bay Lightning. Against the ‘Canes, it was much like their earlier meeting of the year where Carolina controlled the game all the way, save for a few moments.
It was ultimately mental lapses, massive blunders, and costly goals that led Carolina to a 7-2 win Thursday night.
While the Oilers opened the game with some nice pace, they weren’t able to tie it over into any offence, or momentum through the frame. With 20 seconds left in the first, the Hurricanes capitalized as Andrei Svechnikov scored to make it 1-0. Brent Burns extended that lead five minutes into the second, and Carolina was off to the races.
Zach Hyman scored minutes later, and Connor McDavid scored a beauty — his 15th of the year — seven and a half into the third, but it wasn’t enough. Svechnikov got a second goal partway through the second and with under a second left in that frame, Jordan Staal beat Jack Campbell with a soft backhand.
While McDavid’s lone goal in the third was a beauty, it was just that — a lone goal. Carolina racked up three more goals in the final six minutes of the game leading to the rout.
“I thought we competed hard but I didn’t think we were strong enough with the puck,” said head coach Jay Woodcroft after the game. “As a result, I thought there were a lot of self-inflicted wounds.”
Compete as hard as you want, but on a night where you needed to string a second strong game together, the Oilers did the furthest thing from it. If games were won on competition level alone, this would be a different NHL.

Jack Campbell, who in his own words admitted how pathetic his performance was last week against Dallas, had another one of those last night. The Oilers defencemen didn’t help him much, but he couldn’t get out of his own way either.
He got beat clean a number of times, got caught on the other side of the crease far too often and the buttery soft Staal backhander to end the second was unacceptable.
Turnovers abound were a big issue.
“We lost 7-2. A bounce here or there isn’t going to change the game,” said a visibly frustrated Zach Hyman after the game. “Tough game, tough turnovers just by the entire group. Not just on the ones that lead to goals, but turnovers that led to pace of play and possession for them.
“I don’t think we gave ourselves a chance,” he added, when asked about the Oilers playing their first without Evander Kane. “He’s a big part of our team obviously, He’ll be missed, but tonight I think just wasn’t a game that we gave ourselves a chance with regard to managing the puck through the neutral zone, on our blueline, on their blueline.
“Against a team like this — they’re a top-five team — they’re going to come back down and make you pay. Big loss without Evander but it’s a good opportunity for guys in the room to step up.”
The Oilers depth will be further tested as Kailer Yamamoto returned to Edmonton for further evaluation after being injured against Tampa Bay.
Edmonton will need to tighten up before a Saturday matinee against the Florida Panthers.
Zach Laing is the Nation Network’s news director and senior columnist. He can be followed on Twitter at @zjlaing, or reached by email at zach@oilersnation.com.
Featured
Nation Takes
Oilers Talk
Recent articles from Zach Laing