The Day After 33.0: Ryan Nugent-Hopkins shines, but Oilers fall to Predators 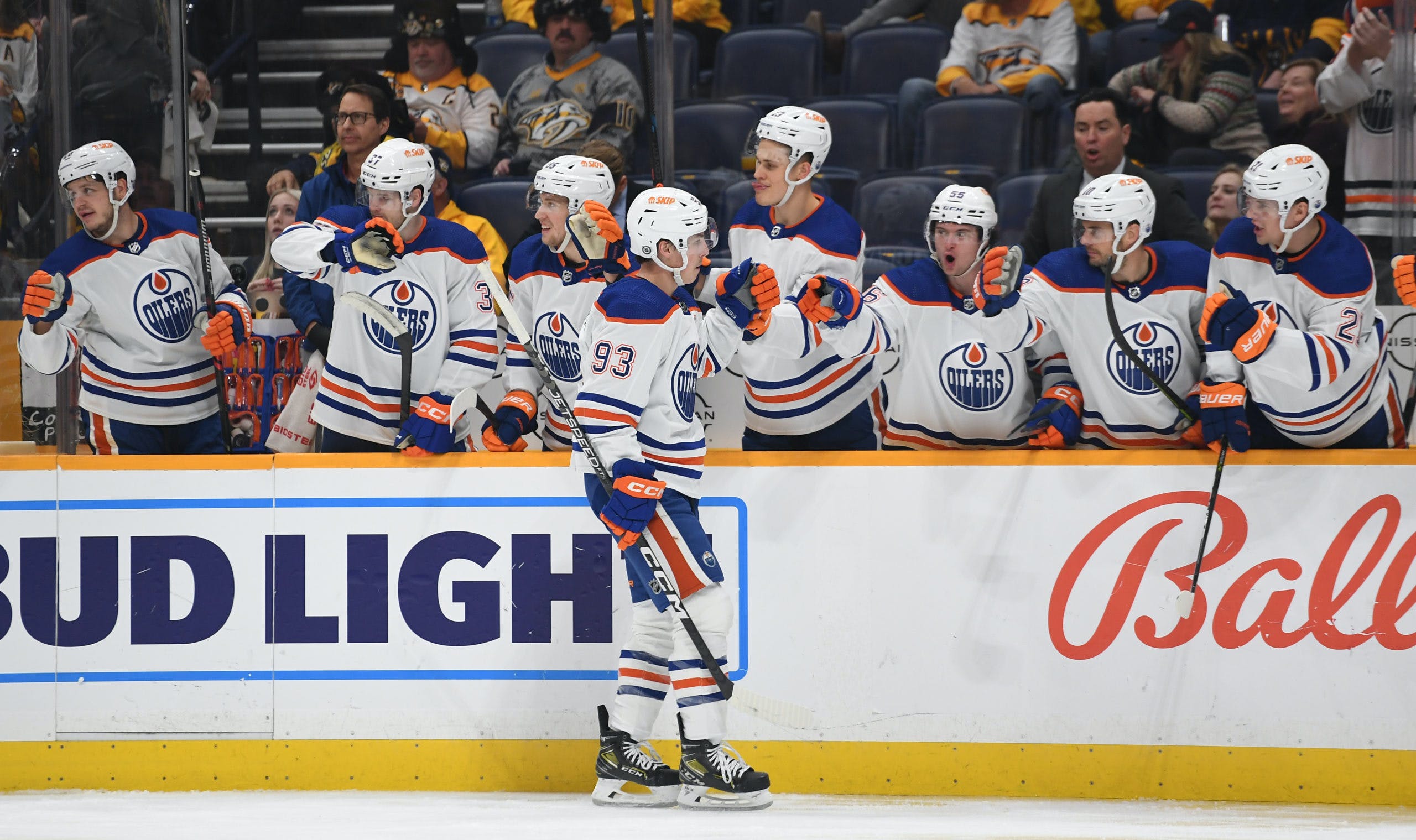 By Zach Laing
1 month ago
The Day After is brought to you by NHL lines site Betway!
It turns out Connor and Leon are human after all.
McDavid chipped in two assists, but Draisaitl went pointless as the Edmonton Oilers fell 4-3 to the Nashville Predators Monday night.
it was a tight game all the way. While the Oilers never led in the game, they responded after each Nashville goal with one of their own. Mattias Ekholm opened the scoring for Nashville 4:35 into the game, and Jesse Puljujarvi responded four minutes later with his second of the year.
It continued the rest of the way with Ryan Nugent-Hopkins scoring two goals of his own.
Here are the the two biggest takeaways from Monday’s game.

Man, what more can you say about Ryan Nugent-Hopkins. He might be one of the most underrated players in the NHL over the last decade. Last night he continued his dominant season with his 16th and 17th goals of the season. The Oilers’ dads, who made themselves some new hats in Nashville earlier in the day, must’ve been sweating.
His 17 goals this year are more than he scored in both 2021-22 (11 in 63 GP) and in 2020-21 (16 in 52 GP). Six of his goals have come on the powerplay this year, and he’s on pace for a staggering 97 points this season. That would be 28 points more than the 69 points he scored in 2018-19 which was a career-high.
Much like he’s been his whole career, he’s been a near-break-even player in terms of underlying numbers at 5×5, and that’s okay. What’s important is that he’s never been a player who would get caved out on the ice.
The shiny eight-year, $5.125-million deal he signed back in 2021 is looking more and more like a steal of a deal.

Sure, it may not have been the prettiest goal, but by gum did Jesse Puljujarvi finally find the back of the net. It was his first goal in 26 games, and there’s nobody who was more deserving of it. It’s been a brutal 2022 calender year for Puljujarvi and with his dad in the stands, he got off the schneid.
He’s a player who has been bit by poor percentages all year. With him on the ice at 5×5 the Oilers have a 5.08 sh% and his personal shooting percentage for the whole year is a meagre 4.17 percent. Let’s hope he can go on a bit of a run here and increase both those percentages.
Other good news? He’s looked good playing alongside Dylan Holloway. They’ve now played 66:19 TOI at 5×5 this season and with them on the ice, the Oilers have controlled 64.29 percent of the shot attempt share, 61.66 percent of the expected goal share and 62.5 percent of the scoring chances while outscoring opponents 3-1.
When Ryan McLeod gets back and healthy, I’d love to see him centre those two. That could be a really, really strong third line.
Zach Laing is the Nation Network’s news director and senior columnist. He can be followed on Twitter at @zjlaing, or reached by email at zach@oilersnation.com.
Featured
Nation Takes
Oilers Talk
Recent articles from Zach Laing