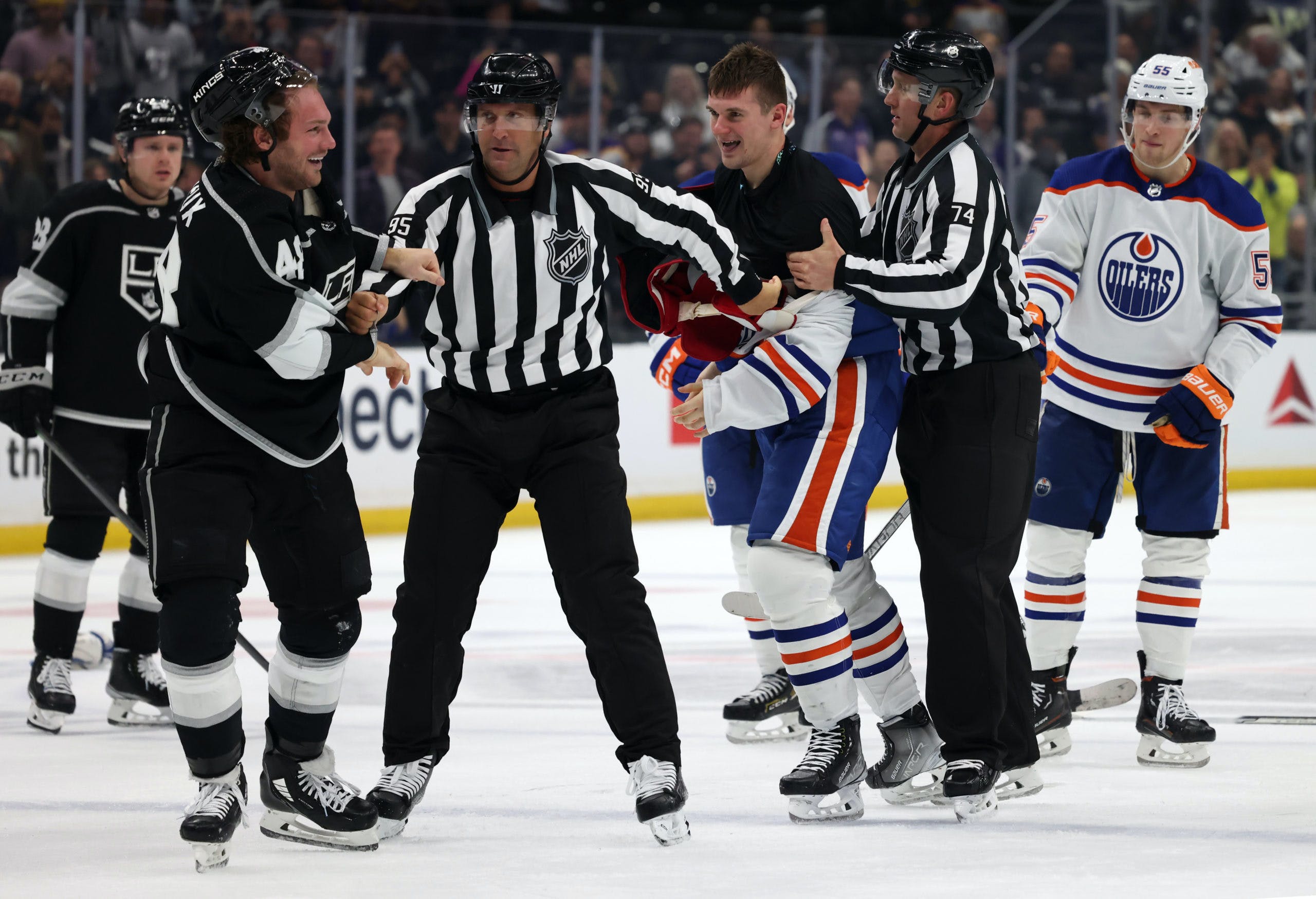 By Zach Laing
25 days ago
The Day After is brought to you by NHL odds site Betway!
Sometimes no matter what the numbers at even-strength hockey say, it’s far from how the game is determined.
Last night’s fiasco against the LA Kings is a perfect example as referees Marc Joanette and Furman South called every little ticky-tack call all night long. Credit to them as they were consistent, just consistently terrible. 70 PIM between the two.
It played its part in the Kings’ 6-3 win. Now, a big part of it was the Kings actually capitalizing on their chances cashing in their first four goals on the powerplay. By the end of the night, the Kings would have seven chances. The Oilers, meanwhile, would have six opportunities of their own, cashing in a total of zero goals.
With the Kings up 2-1 early in the first, it’s hard not to say a criminal too many men on the ice call against the Oilers was a critical turning point in the game.
It was clear the Oilers had five on the ice, and yet, the call was still made. It came at a tough point in the game, too. Kailer Yamamoto had scored with 2:58 left in the first period and heading into the third period it felt like the Oilers could peel back into this one.
What happened on the subsequent Kings’ powerplay? Adrian Kempe snuck behind the Oilers’ defence and got a clear break on Stuart Skinner. Kempe put it five-hole, and Skinner’s night was done. It was a comedy of errors all night long from the Oilers’ penalty kill, something that has plagued the team this season.
Fourty-two games into the season, the Oilers have given up 42 powerplay goals, tied for most in the league with the Anaheim Ducks. Even at the best of times, it’s been abysmal and has been a major issue for this team all year. Their saving grace has been their near-historic powerplay, which the Oilers have converted 48 times on.

Last night was the rare night where the Oilers can’t convert on their extra man chances, but when you’re 42 games into a season and unable to win games unless your powerplay scores, that’s a serious issue. The Oilers somehow managed to control the shot attempt share, scoring chances share and expected goal share at 5×5, but that was after a rabid flurry that saw the Oilers try and make it a close game.
Give the Oilers credit as they fought back in this game, quite literally. Jesse Puljujarvi fought Philip Danault. Zach Hyman fought Sean Durzi. Klim Kostin, with a minute and a half left in the game, fought Brendan Lemieux. Right after the Puljujarvi fight, Ryan McLeod scored. After Hyman’s, McDavid scored.
There’s no way to sugarcoat things, though: the Oilers are 42 games into a season after going to the Western Conference Finals and have a .536 points percentage. They’re on pace for 88 points. Something has to chance, and fast.
Zach Laing is the Nation Network’s news director and senior columnist. He can be followed on Twitter at @zjlaing, or reached by email at zach@oilersnation.com.
Featured
Nation Takes
Oilers Talk
Recent articles from Zach Laing