The Day After -5.0: Stuart Skinner was fantastic, Oilers steal a 3-2 shootout win over the Jets 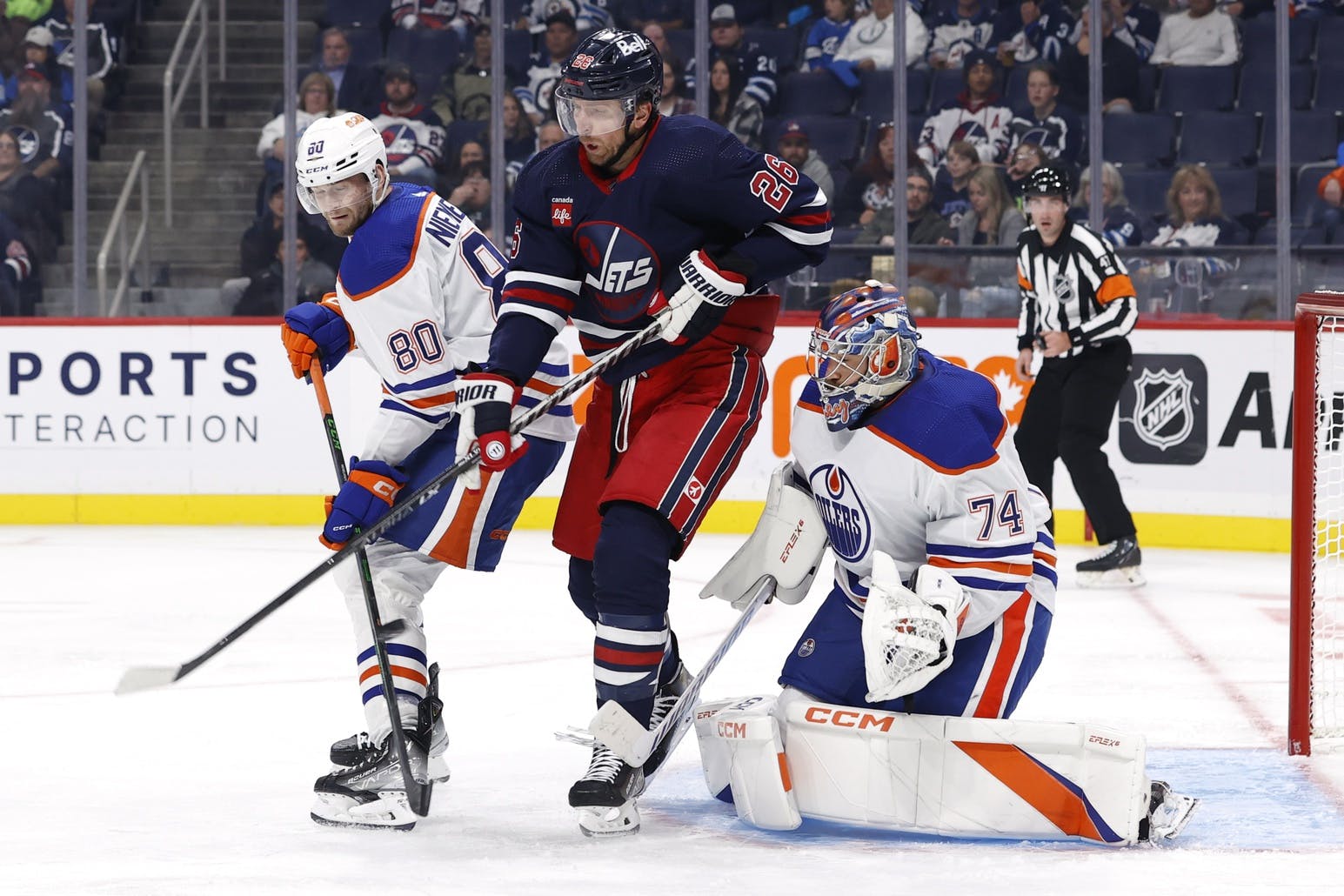 By baggedmilk
1 month ago
Stuart Skinner we speak your name. Final Score: 3-2 Oilers in the shootout
Going into Winnipeg, I wasn’t overly concerned about the outcome of the game but rather how key Oilers performed with some increased minutes and responsibility. Now that we’re on the back side of this neverending pre-season, the available minutes are starting to run out and the pressure to make an impression gets cranked up by the shift. And for players that are fighting for jobs, the last they thing could do was have another quiet night.
Let’s dive into a few things I noticed about last night’s game.

DYLAN HOLLOWAY HAS THE TOOLS

Even though it’s almost likely that Dylan Holloway cracks the roster because of the cap issues, he’s going to get the job done on merit. Holloway has all of the tools to make an impact at the NHL level once he gets the at-bats and confidence needed to put everything together, and I’m betting it’s going to happen from the get-go. Throughout the Young Stars Tournament and pre-season, Holloway has been very noticeable on many occasions for his size and speed down the wing, and I think that’s going to be a huge value to the team sooner than later. What I don’t know is when it will all come together. It’s hard to get a good read on things like that in the pre-season, but what I can tell you for sure is that the kid has an engine that won’t quit and wheels that will keep him playing at the highest level for a long time. If he can combine those two skills with some hands and finish then we’re going to be talking about an absolute stud in a few years (or less) from now.

I have no idea where he would fit in the lineup, but I will always cheer for Tyler Benson. Not only did I love the snipe of a goal he ripped past Hellebuyck in the first period, but I actually think he’s had a fantastic pre-season so far. His positioning has been strong, he’s been in the mix offensively, and he looks a step quicker by my eye, which could make him an early call-up option when someone inevitably goes down. Even though I don’t think last night’s goal will be enough to keep him with the big club when October 12th hits the calendar, I don’t think it will be too long before we see him again.

WE NEED MORE FROM PHILIP BROBERG

If Philip Broberg is going to play on the third pairing this season then he’s going to need to find a way to settle down. I know that Bob Stauffer has been talking about some added bulk as being a reason he looks behind a step, and while I know nothing about that theory, my eyeballs are certainly buying what Bob is selling. For me, to this point, Broberg hasn’t shown that he’s ready to handle NHL competition consistently, and that’s obviously concerning when you’re talking about a guy that you expect to have on your third pairing. That said, he’s still a really young guy and I have plenty of time for him provided that the development work he needs to get done happens in the American Hockey League. Is that fair? The other thing that’s worth noting is that Stauffer has been talking about the holes in his game for the past few nights and when that’s never good news for the player when that starts happening with regularity.

Coming into the pre-season, I had high hopes that we would see Stuart Skinner starting off his year with some strong performances in the tune-up games and that’s exactly what’s happened. Outside of one goal that he might want back against Calgary on Wednesday, Skinner has been fantastic between the pipes and I especially love how he’s looked calm and confident regardless of what’s been thrown at him. Last night against the Jets, Skinner gave his team a chance to stay in the fight despite being heavily outshot early on, and that steadiness allowed his teammates the time needed to settle down and turn the game around. Frankly, the fact that they won that hockey game is ridiculous based on how it started, and Stuart Skinner was sensational in making that happen. Who knows what kinds of ups and downs Skinner will have in his first full NHL season, but to this point, he’s doing everything he can to give us confidence that he can handle the gig.

As much as I disagree with anyone that suggests Jesse Puljujarvi has been horrible in the pre-season, I also don’t think he’s been fantastic by any stretch either. If I’m being honest, I thought he’s looked tentative offensively and as much as I can appreciate what he does on the defensive side of the puck, we still need him to chip in with some chances from time to time. Last night, he did that. Last night, he looked much more like a player that wanted the puck on his stick and the result was his best game so far. While he wasn’t able to put the puck in on any of his five shots on net, I was encouraged by the effort he put down.

As much as I disagreed with the decision to bring Jake Virtanen in on a PTO in the first place — I felt he’s nowhere near worth the noise or good enough to crack the roster — I tried to keep an open mind because the organization is going to do whatever it wants regardless of how I felt about it anyway. Well, after four games pre-season games and not a whole lot to show for the time, I can’t imagine we’re too far away from the end of the line for the former Canuck. I mean, as much as he deserves credit for creating the turnover that led to Tyler Benson’s first period goal, I guess I was expecting more from a guy whose NHL career is hanging by a thread. I thought we would have seen him hustling up and down the ice like a man on fire, but that level of urgency just never seemed to show up.