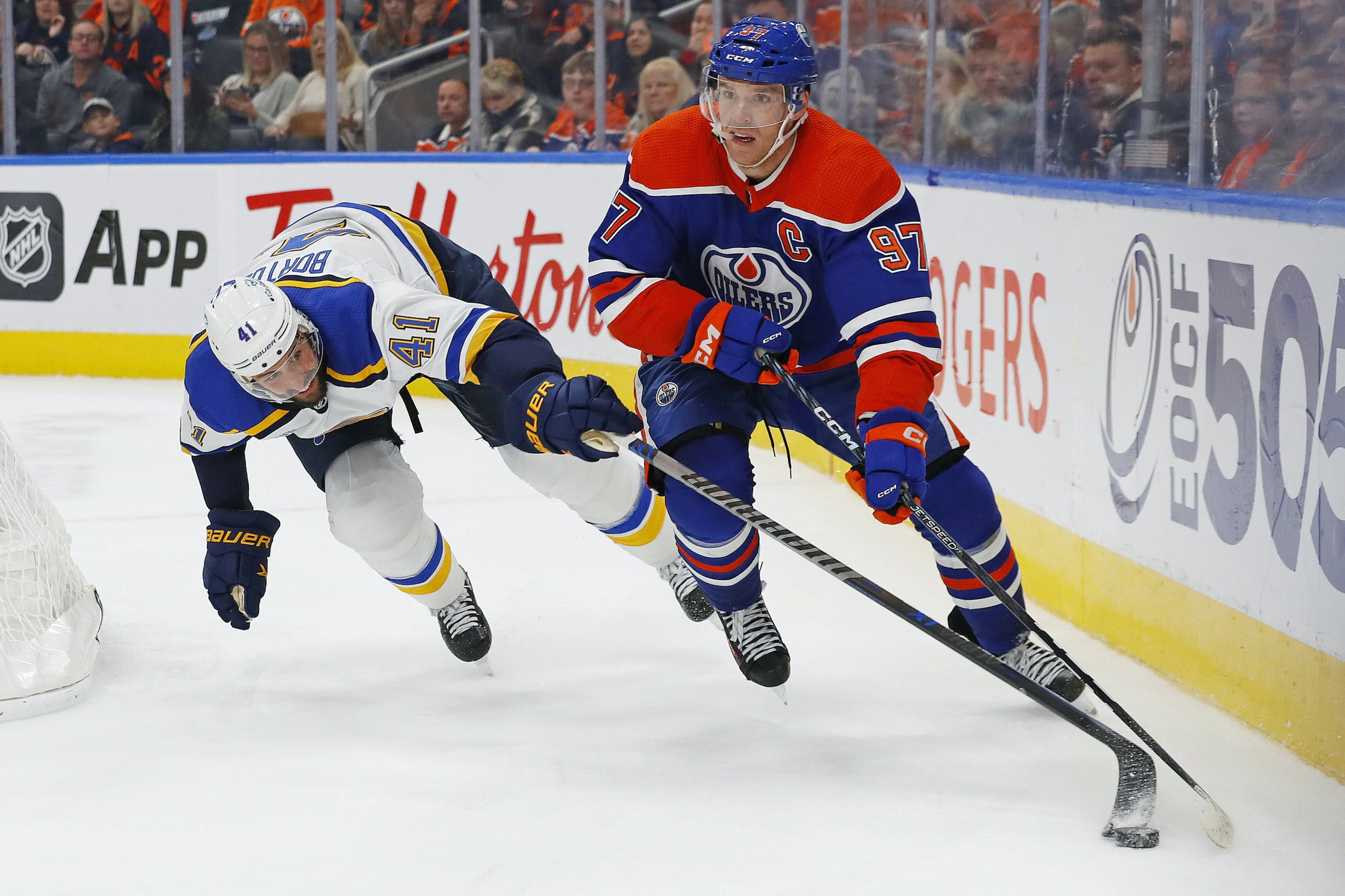 By Zach Laing
3 months ago
Given the sluggish pace of Saturday afternoon’s matinee between the Edmonton Oilers and St. Louis Blues, one has to wonder if both teams had Halloween parties Friday night.
Unlikely, but boy — did it sure feel like it.
These Saturday afternoon games are weird ones, and that’s exactly what Oilers fans saw in a 2-0 loss to the team from Music City.
The lone goal of importance came off the stick of Torey Krug, who blasted a quick point shot home on the powerplay five minutes into the game.
Beyond that, there wasn’t much ado.
Credit where it’s due as when the Oilers did start to get buzzing late in the game, Jordan Binnington and the Blues’ defence shut the door. Many chances were had by Connor McDavid et al, but they just couldn’t find the back of the net.
The truth, however, was that was a game the Oilers should’ve had. They had 1.92 expected goals at 5×5, but scored zero. They controlled 65.85 percent of the scoring chances, but couldn’t bear down enough to find the back of the net.
Even when McDavid juggled the puck into the offensive zone and still got a shot away four minutes into the third, nothing else was able to come off it.
It was a clean game, so the referees said, both ways. Each team only committed one infraction, so they called, and St. Louis was able to capitalize on theirs. Edmonton’s, meanwhile, came halfway through the third period and the Oilers didn’t even muster a shot on goal. Blech.
The best part of the game may have been the play of Jack Campbell, who turned aside 20 of 21 shots faced. He was a determining factor in how close the game was making some massive, massive stops along the way. This can be a game he can hang his hat on and build from.
It’s cliche, but the Oilers need to find a way to win these tight games. St. Louis is a strong team that had played just two games prior to coming into Rogers Place, but they didn’t look all too fresh.
Edmonton’s been sluggish to start the season, now dropping to 2-3 through the first five. Nothing to panic about — far from it, in fact — but things are soon to be different for the boys in blue. They cap off a six-game homestand to start the year Monday when the Pittsburgh Penguins roll into town. It’ll be far from an easy matchup, but one the team needs to win.
Securing W’s at home is crucial for any team, evermore so for the Oilers who struggled on the road last year.
Zach Laing is the Nation Network’s news director and senior columnist. He can be followed on Twitter at @zjlaing, or reached by email at zach@oilersnation.com.
Featured
Nation Takes
Oilers Talk
Recent articles from Zach Laing