The Day After: Blackhawks 4 – Oilers 1 — Mike Smith lays another egg while Marc-Andre Fleury posts a gem 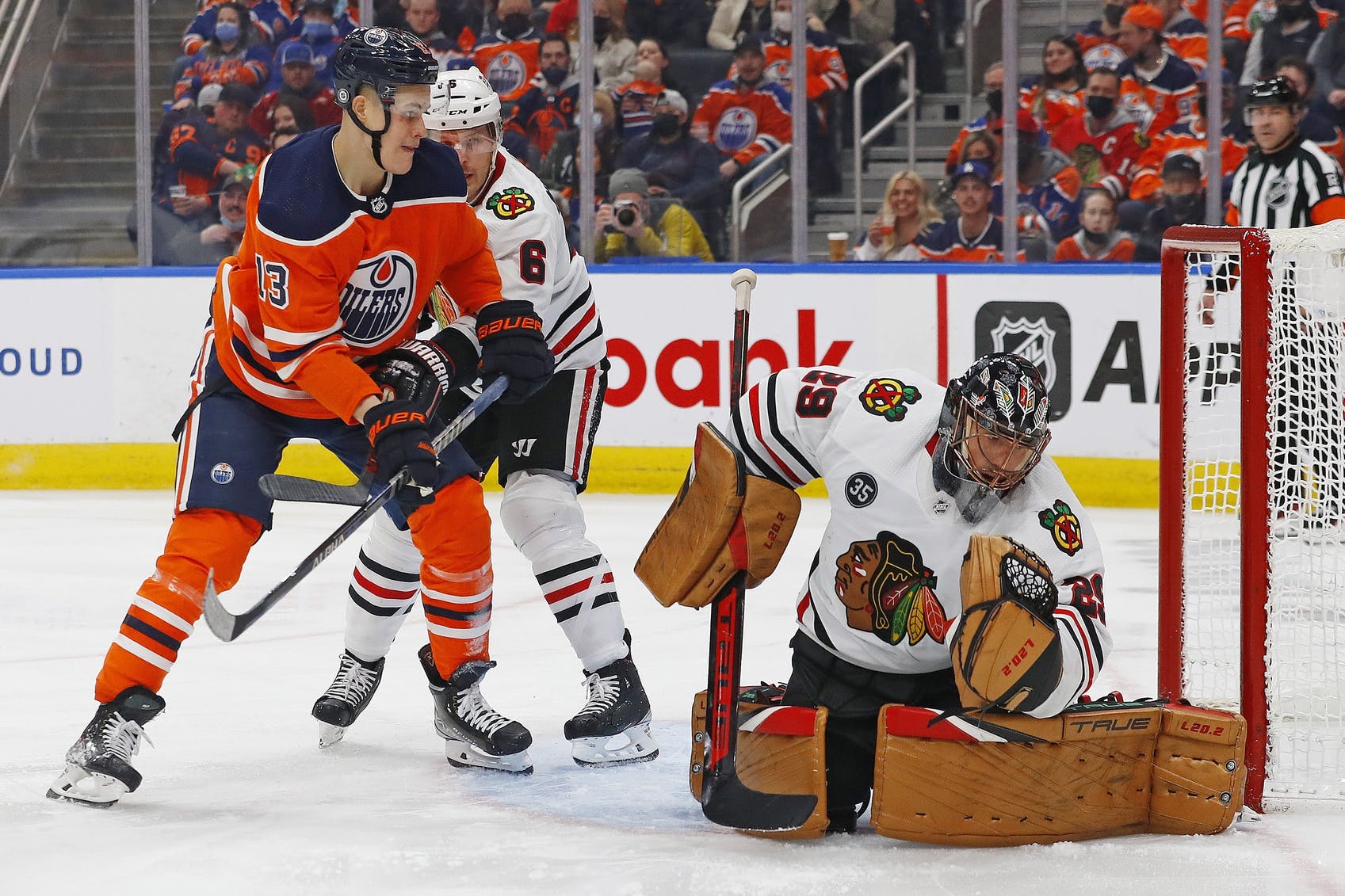 By Cam Lewis
11 months ago
Goaltending, yet again, was front and centre in Edmonton’s loss to the Chicago Blackhawks on Wednesday.
Mike Smith was shelled for four goals by the Vegas Golden Knights on Tuesday and the veteran said that he wanted to get back in the net immediately and Dave Tippett gave him the green light. Smith performed just how you’d expect a rusty 39-year-old to perform in the second leg of a back-to-back, as he allowed two goals on the first two shots of the game and four on 30 shots all told.
When Smith made his first save of the game with the Oilers down 2-0, the fans gave him a Bronx Cheer…
Meanwhile, on the other side, Marc-Andre Fleury put together one of his best starts of the season, stopping 40 of 41 shots that Edmonton threw his way. The Oilers made the score 2-1 early in the second when Leon Draisaitl scored on the power-play but Fleury slammed the door the rest of the way and quelled any chance of a comeback.
Over at The Athletic, Mark Lazerus said the thing that just about every Oilers fan watching Wednesday’s game was thinking…

Oilers fans watching Mike Smith flailing and playing uncomfortably deep in his own net during the first period Wednesday night probably have dreams of Marc-Andre Fleury coming to Edmonton before the March 21 trade deadline, as unlikely as such a trade is.
“The cool thing is I don’t think I’ve ever seen anyone have as much fun on the ice as that guy,” Dylan Strome said. “He’s always yelling, he’s hugging his post, he’s rubbing his post — he’s doing all sorts of things out there. Every time he makes a save, he’s loud, he’s yelling, he’s happy. It’s fun to be around. It gives you that little confidence boost when you’re on the ice and you hear him cheering for himself after he makes a save.”

While Fleury’s season has been up and down and his .910 save percentage isn’t exactly elite, the goaltending performance he put up in Edmonton is exactly what the Oilers themselves badly need down the stretch, one that allows the players to operate with confidence. Smith isn’t the lone reason the Oilers lost to Chicago, but allowing two goals right off the hop certainly plays a role in emotionally draining a team that’s being described by opposing coaches as “fragile.”
There was a sentiment going around that Fleury shouldn’t be allowed on a flight out of Edmonton and that Ken Holland should get a trade sorted out before the Blackhawks leave, but, as Lazerus said, such a deal is unlikely.
The first problem for the Oilers when it comes to acquiring Fleury is his $7 million salary cap hit. Even if the Blackhawks retain the maximum amount of salary possible, which is 50 percent, the Oilers are going to have to send money out the other way to make it work. And then there’s Fleury’s 10-team no-trade list. If Fleury is going to go through the stress of packing up and leaving his family in Chicago shortly after a jarring, unexpected trade from the Golden Knights, is this situation in Edmonton something he’d want to be a part of?
Again, goaltending isn’t the only thing that’s been wrong with the Oilers in their back-to-back losses out of the All-Star break, but this is a problem that’s going to need to be solved if the team is going to go on any kind of run down the stretch.
Edmonton’s issues run deep — there isn’t much depth scoring and the team defence leaves plenty to be desired — and it isn’t possible to fill all of the holes in the middle of the season. But if there’s one thing in hockey that can cover up the leaks on a mediocre team, it’s excellent goaltending.
Finding an ace in net should be Holland’s top priority ahead of the trade deadline in order to salvage this season.
News
Post Game
Recent articles from Cam Lewis