The Day After: Are powerplay changes coming for the Oilers? 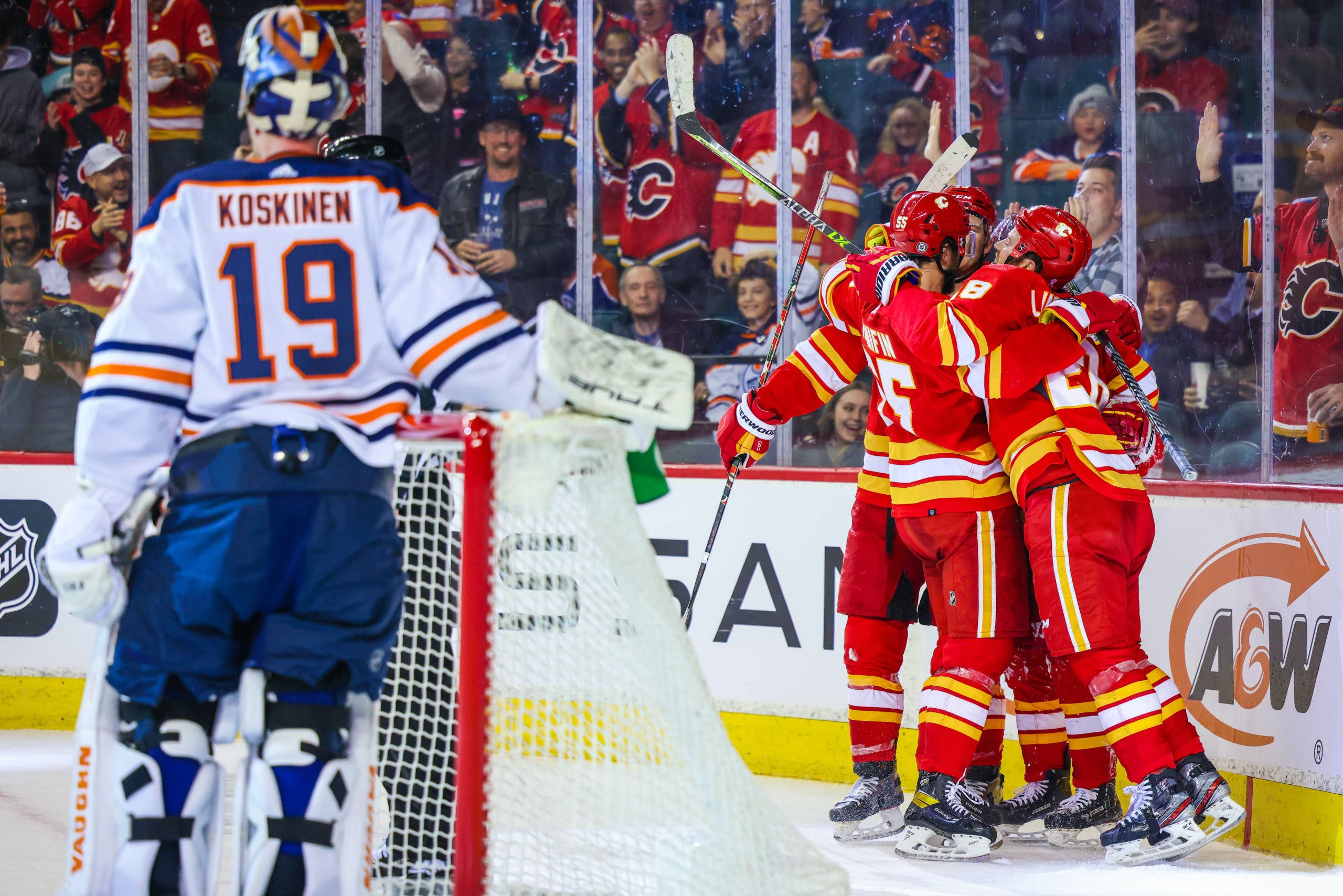 By Zach Laing
8 months ago
The Oilers have some serious problems on their hands.
Of course, the team spent Monday night losing their third straight game, this team a 3-1 decision to the Calgary Flames.
It was a night where the Oilers, at least at 5×5, played a strong game. Edmonton controlled the pace of play with 55.22 percent of the shot attempts, 56.67 percent of the scoring chances and 58.33 percent of the expected goal share. Impressive against a defensively stout Flames team.
The Oilers generated traffic and shot attempts in tight, and did a solid job keeping the Flames’ shot attempts to low-danger areas.
Where Edmonton lost the battle was on the special teams. They went 0/4 on the powerplay and allowed one powerplay goal against — the one that broke open the scoring.
“We’re not in sync right now,” said Leon Draisaitl of the powerplay. “It’s an area that has to improve. We needed it tonight, and we didn’t have it. We have to be better at it.
“I mean, we played a solid game I think. Not going to win very many games if you score one goal. I thought on the defensive side of it, it was good. Offensively, maybe didn’t create enough.”
Their powerplay, as a matter of fact, was dead on arrival. They only fired five shot attempts towards the net with the man advantage, three of which actually hitting the net.
It’s far from where it needs to be. A big part of this has to do with Ryan Nugent-Hopkins missing from the lineup. The difference is stark.
With him on the powerplay, the Oilers generate 11.08 expected goals per hour, a rate 47% better than league average. With Nugent-Hopkins off the powerplay, the Oilers generate only 7.98 expected goals for per hour, a five percent rate above league average.
In the middle of the ice, Nugent-Hopkins’ effective passing and quick thinking is sorely missed. He provides some calm up front. While the Oilers powerplay had already been struggling with him in the lineup, they’ve fallen right off the cliff without.
As noted by our own NHL_Sid, the Oilers special teams has been dismal for some time. Since Dec. 5, their powerplay has operated at the 23rd best 18.5%. Their penalty kill has been dead last at 69.4 percent.
And for now, at least, it appears changes might be on the horizon for the powerplay.
“(You) can’t forget we’re missing three key pieces, four even with Bouchard out today as well. There is no easy answer on it,” said Oilers head coach Jay Woodcroft after the game. “We’re going to look to address some things personnel-wise to give it a fresh look. We’re going to work on it in practice.
“I think we can be more substantive in zone, more substance, more shots to the net looking for second and third chances. Not just relying on a certain player. It’s about finding that second and third opportunity and scoring a dirty one around the paint.”
What those changes will be is yet to be seen, but the truth is something has to give. Somebody needs to step up because no matter how good Connor McDavid and Leon Draisaitl are, they still can’t do it all on their own.

Southerners win low-event Battle of Alberta
Back when Ville Nieminen wore 24 for the Calgary Flames, he coined a phrase: “hospital hockey.” The phrase was used to describe tight-checking, low-event hockey, and referred to how much patience it took to play that style. The Flames hosted the Edmonton Oilers on Monday evening and seemed to embrace hospital hockey.
In a very low-event affair, the Flames skated away with a 3-1 victory over the Oilers.
Why the Flames won
The Flames didn’t seem to have much offensive swagger on this occasion. But they also seemed perfectly content to play a low-event game and tried to grind out a win by keeping the Oilers’ skill players to the outside and leaning on them. They were fairly successful.
Special teams was, ultimately, the difference-maker in this one. The Flames scored on the power play and their penalty kill did what they could to disrupt Edmonton’s man advantage play.
Read more from FlamesNation’s Ryan Pike here.