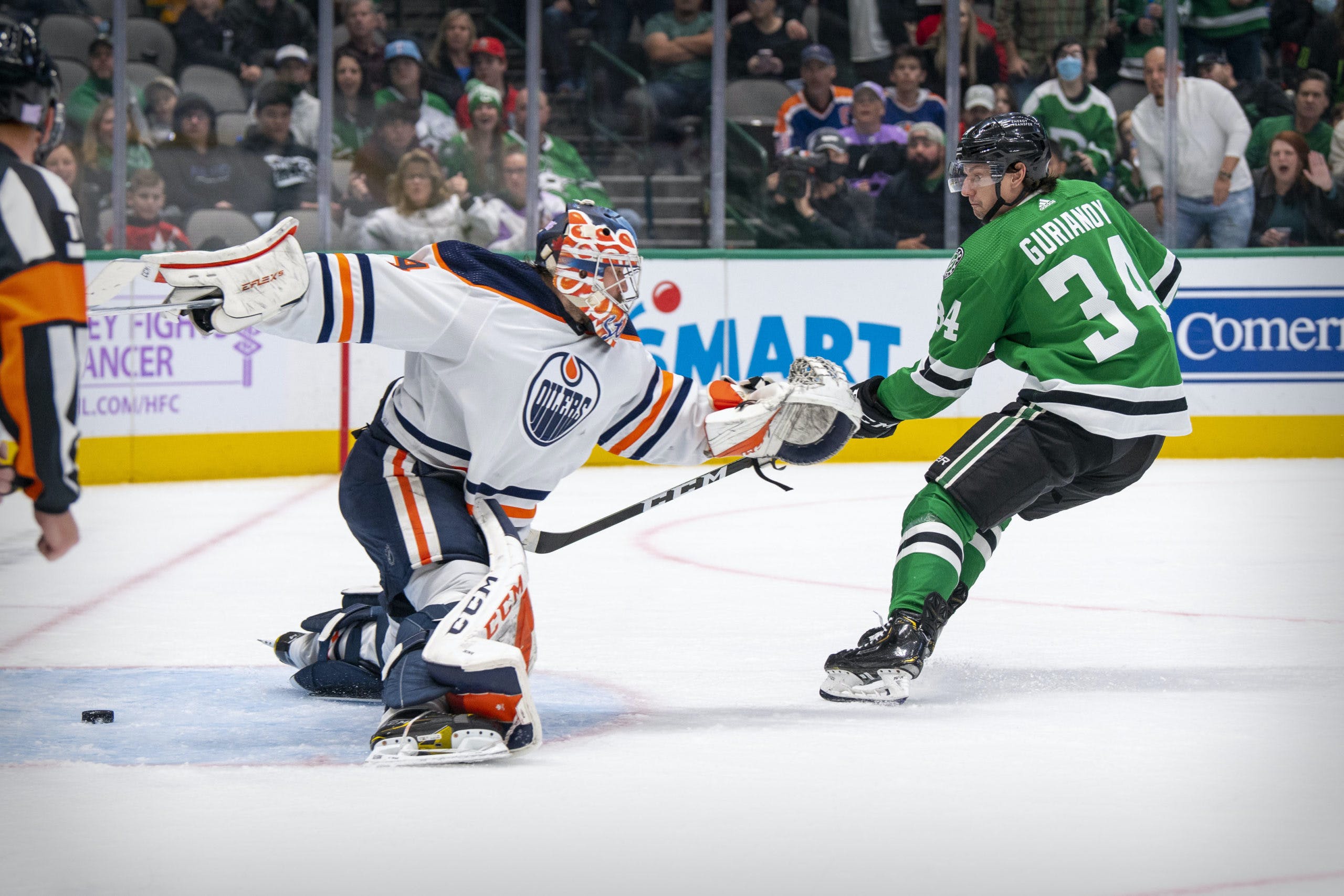 By Zach Laing
1 year ago
Death, taxes, and poor officiating.
The Edmonton Oilers found themselves on the short-end of the referring stick again Tuesday night as they fell to the Dallas Stars 4-1.
And while the loss stings, the real hurt comes with Oilers defenceman Duncan Keith leaving the game with an upper-body injury. It’s hard to pinpoint exactly what happened, but Keith was hurt a little over eight minutes into the second frame and didn’t take another shift in the game.
What was seen, however, was Keith trying to make a seemingly simple pass right off a faceoff win. As he let the puck go, he instantly winced and skated for the Oilers bench slamming his stick on the ice in the process.
Head coach Dave Tippett had no updates after the game on Keith’s status.
“The three guys that were on our left side defence are not here now, so that’s a challenge,” he said. “(Dallas) got the two powerplay goals in the first period, and it just allows them to make sure they’re overtop of everything and it makes it harder on (us).”
It’s about as bad of news as could be for the Oilers. With Darnell Nurse out with a broken finger, Keith had slid up the Oilers lineup to play top-pairing minutes alongside Evan Bouchard. Now, the only three left-shot defencemen on the Oilers are Kris Russell, Phillip Broberg and William Lagesson.
As noted by our own Jason Gregor, Markus Niemelainen is a likely recall candidate.
But as rough as losing Keith is, the Oilers were simply outplayed. Despite fighting through a poorly officiated game, the Oilers looked lethargic all night long. The Stars clearly had more jump and were clearly the better team.
“I don’t think we deserved as many as we got. you try to kill them — that’s the difference, we didn’t kill them tonight,” said Tippett. “There’s some games it goes like that and you’re able to kill those penalties and you get it done.
“We gave up two powerplay goals, actually three — one right at the end of it. You’re chasing the game against a heavy team like that, they’re going to play in front of the puck all night. You get behind, it’s hard to jump back in.”
The Edmonton Oilers three-game road trip continues tonight with a visit to the Arizona Coyotes, who far and away are the worst team in the league. It’s worth noting that the Coyotes are without Jay Beagle and Johan Larsson, who are the top two matchup centres for the desert club.
Edmonton then heads to Vegas for what will be a tough matchup Saturday with the Golden Knights.

Stars’ issues fall to the wayside as Dallas shuts down Oilers, win four of last five games
Winning will cure a lot of things.
It’ll clear up a goaltending situation that looks as crowded as it did two months ago. It’ll erase the cursed memory of a five-goal loss just days ago. It’ll cover up the healthy scratch of a hometown kid or the lack of even-strength goals.
Winning does those things, and with the Stars’ 4-1 win over the Oilers on Tuesday night, issues fall to the wayside as points accumulate in the standings. Dallas has now won four of its last five games, with each of its wins in the last 10 days by three goals.
“We did what we had to do,” Stars coach Rick Bowness said. “That was solid; everyone bought in. It was just a solid team effort. You’re playing against those elite players, it’s got to be a group of five working together to slow them up. We did that for the most part.”
The Stars power play scored twice on Tuesday night, matching the total number of power-play goals the Oilers had allowed on the road entering the game. Roope Hintz scored by deflecting Alexander Radulov’s tip of John Klingberg’s shot. Jason Robertson finished a cross-ice feed from Hintz later in the first period.
Denis Gurianov scored four seconds after a Stars power play ended, speeding up the left wing and beating Stuart Skinner with a backhand between his legs. Gurianov’s goal ended a stretch of seven straight Dallas goals that were not scored at even-strength (four on the power play, two short-handed and one empty-netter).
Luke Glendening added a third period goal by tipping Ryan Suter’s point shot for his fifth goal of the season.
Jake Oettinger made his case again to remain in Dallas by making 20 saves. He improved to 3-0-0 on the season and has been the team’s best goaltender this year.
The Stars ended Connor McDavid’s 17-game point streak as Miro Heiskanen did most of the heavy lifting in shutting down the reigning Hart Trophy winner. McDavid entered the third period without a shot on goal, and Heiskanen was on the ice almost every time McDavid was.
“Awesome,” Bowness said of Heiskanen. “He had a great stick tonight. He was great, he really was. Skating the puck out, but it’s his stick breaking up plays that he was so good at tonight.” – Matthew DeFranks, Dallas Morning News