The Day After: Skinner stays strong as Oilers fall flat 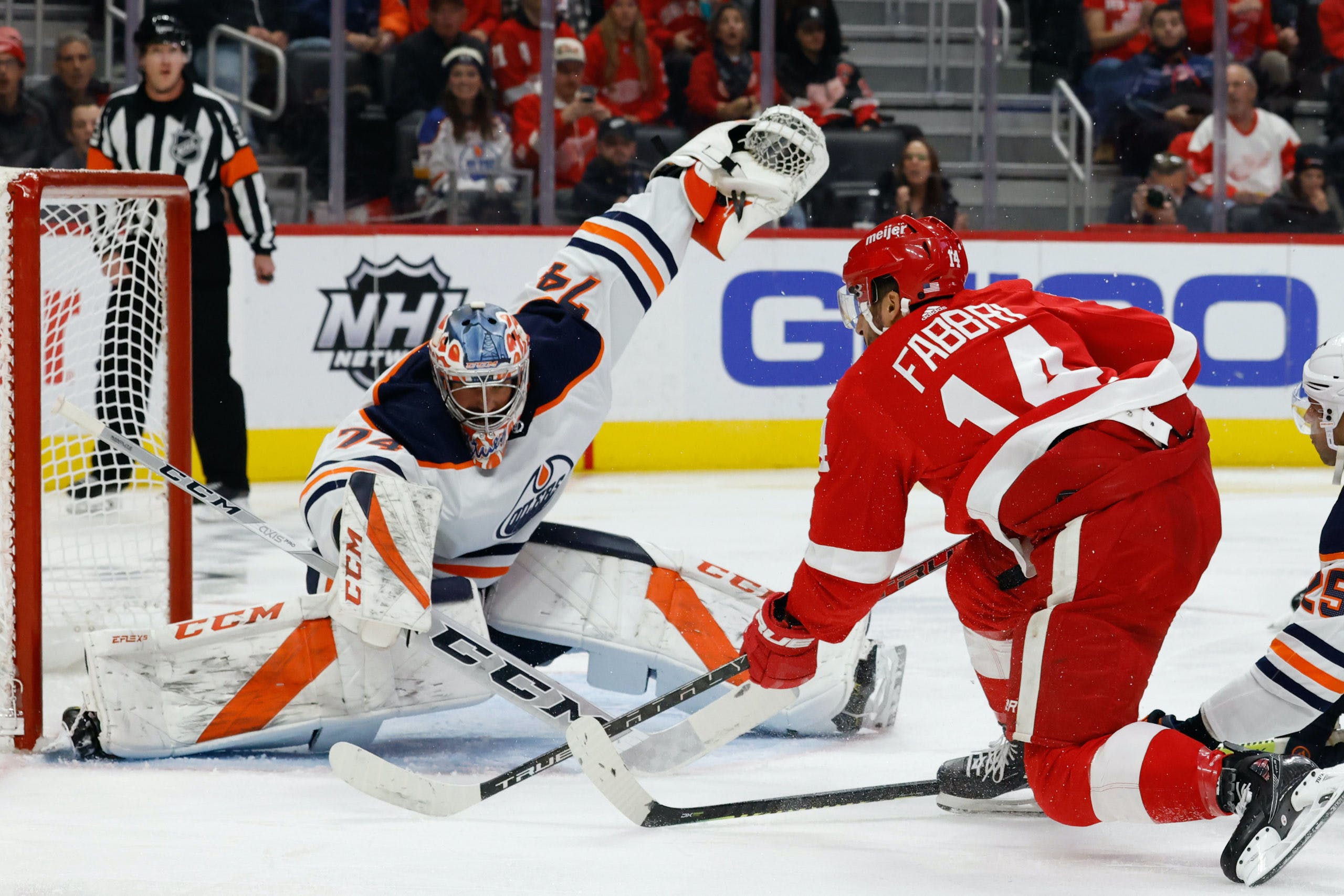 By Zach Laing
1 year ago
There’s starting a five-game road trip strong, then there’s whatever happened last night in Detroit.
While the Red Wings came out strong and held true for a 4-2 win, the Oilers look flat, unenthused, and all-out awful.
For the first 39 minutes of the game, it was all Detroit. They won all the puck battles, they dominated the shot clock, and they gave the Oilers offence very few chances. So much so they were able to meander on to a 3-0 lead.
The truth of the matter is the Oilers, as good as they may be this year, aren’t going to be on the top of their game every single night. You’d like to limit those nights, however, and the Oilers know it.
“You never lose two in a row, that’s the main thing, that’s the focus now and that’s all we can do,” said Oilers captain Connor McDavid, who scored the team’s second goal as they tried to claw back into the game. “(We) dug ourselves a hole again. I liked our response, I liked our third period. We had enough chances to tie it. We can’t keep digging ourselves that type of hole.”
Through it all, the Oilers came close. Jesse Puljujarvi’s goal in the final minute of the second gave the Oilers life, and enough energy to score another and get close in the dying minutes.
Defensive mistakes, however, cost the team. Tyson Barrie tripped over a shaving on ice on the Red Wings first goal looking more like a peewee player than an NHL defenceman, while Evan Bouchard and Darnell Nurse got outworked in front of their own net on Detroit’s second goal.
Goal three was on Stuart Skinner, who started in his second NHL game. But the game doesn’t fall at Skinner’s feet, no.
Skinner was about the only player who showed up for the better part of the game turning aside 35 shots and posting an impressive .921 save percentage, despite giving up a trio of tallies.
“It felt like I just went out there and do what I normally do. it felt better to have games (in the AHL) before I actually play,” said Skinner after the game. “I feel like I belonged. I think that’s huge for me. Playing my first game (last year against Ottawa), it was a little shaky. after this game, I feel a lot better about this game.”
And credit where it’s due. Skinner looked every part of an NHL goaltender and not someone who just got recalled on a whim with the Oilers’ starting goalie down. He kept the club in the game early and thwarted 16 high danger scoring chances. While Skinner showed well in the preseason, a strong showing last night bodes well for his future in the organization.
“I thought he was good, I thought he did a good job of letting us get into the game,” said McDavid after the game. “Obviously, by the time we found our legs we were down three. He definitely battled hard and we definitely didn’t make it easy on him in front of him.”
For the Oilers, their testy road trip continues Thursday night against a desperate Boston Bruins team struggling to score and struggling to keep the puck out of their net.

What an entertaining performance the Detroit Red Wings and Edmonton Oilers put on Tuesday at Little Caesars Arena.
It was a high-energy game that pitted the Wings against one of the top teams in the NHL. The Wings played a confident, well-executed style that led to a 4-2 victory and their first three-game winning streak in two years.
“We want to be that team that teams come in here and say wow, it’s hard to play against these guys,” Vladislav Namestnikov said. “Hopefully we can keep rolling and winning.”
Moritz Seider scored into an empty net with 5.4 seconds to play to seal the victory and improve the Wings to 7-5-2. It’s only the second time in 11 games the Oilers have lost in regulation.
“For the first two periods we did a really good job against a team that has a heck of a record, that’s a really good team,” coach Jeff Blashill said. ” Not quite as good in the third, but in the first two, we did a really good job. We made lots of plays, we got the puck in in the o-zone and then we tracked and gapped really well. That’s how we have to play to be successful.”
It was as crisp a game as the Wings have played all season. Namestnikov made his sixth goal of the season a beauty, scoring in the first period, and added his seventh in the second period. Dylan Larkin made it 3-0 on an opportunistic goal. Stuart Skinner attempted to send the puck behind his net but it bounced right back out front and onto Larkin’s stick, leaving the LCA crowd to celebrate another goal.
“The arena was buzzing,” Namestnikov said. “Whenever you get a 3-0 lead, it’s always great. We kind of let them come back a little bit, but it was for sure a fun game.”
The Wings’ lead was shaved in the last minute of the second period when Slater Koekkoek picked up a loose puck and sent Jesse Puljujarvi off on a breakaway that ended with the puck flying by Alex Nedeljkovic. The damage grew in the opening minute of the third period, when Connor McDavid scored to pull the Oilers within a goal, but the Wings stuck to their identity to win a second straight game at home. – Helene St. James, Detroit Free Press

Looking to up your fantasy hockey game? DailyFaceoff has the tools you need for both daily and season-long fantasy leagues, including a lineup optimizer, daily projections, and a whole lot more. Sign up for the DailyFaceoff tools here.
Zach Laing is the Nation Network’s news director and senior columnist. He can be followed on Twitter at @zjlaing, or reached by email at zach@oilersnation.com.
Nation Takes
News
Oilers Talk
Recent articles from Zach Laing