The Day After: Oilers roll Lightning in statement game 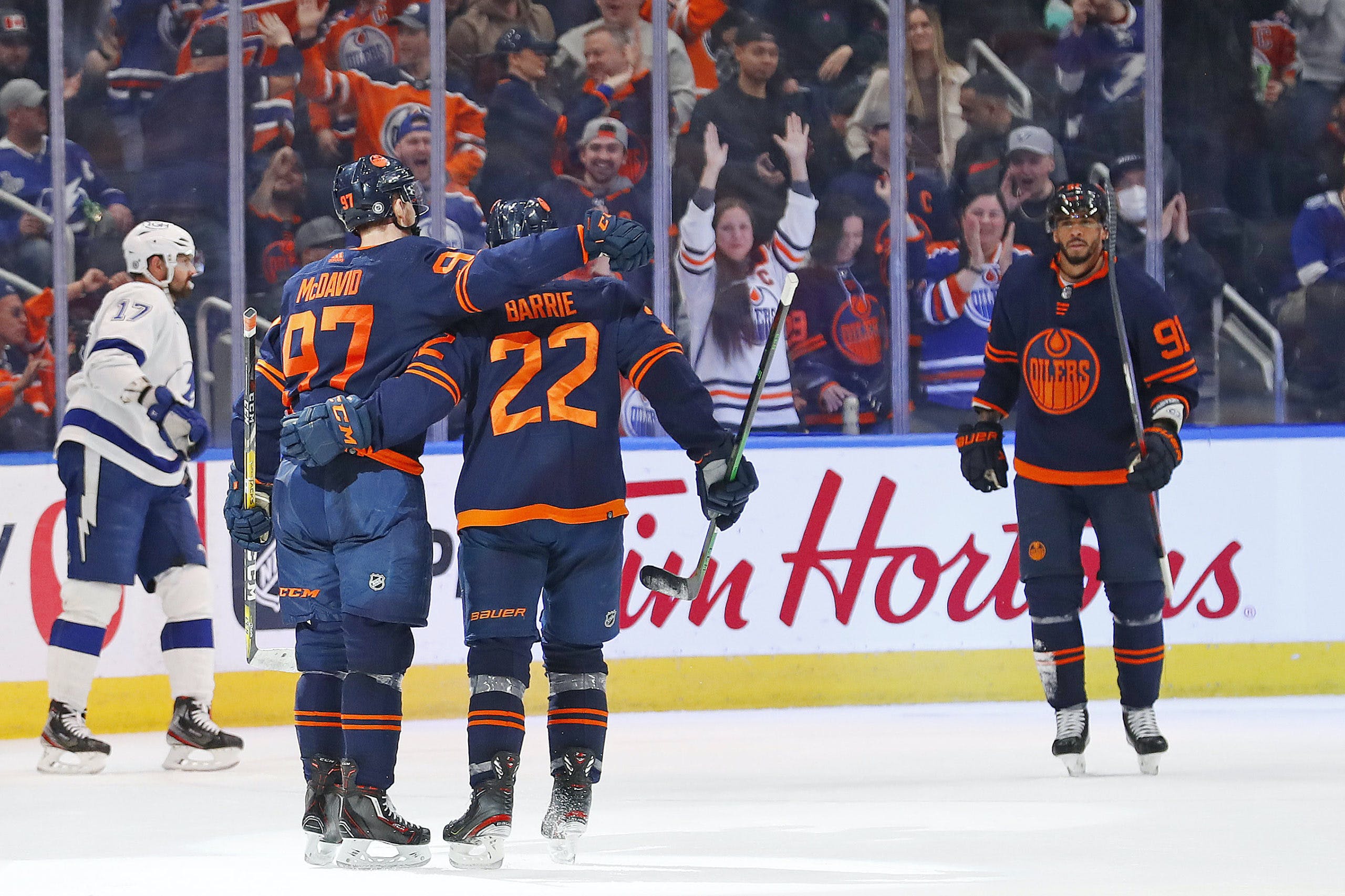 By Zach Laing
8 months ago
In Jay Woodcroft’s eyes, it was just another day in the office. That’s been the mantra he’s brought to town since being named interim head coach of the Edmonton Oilers a month ago.
But the truth of the matter is his clubs’ 4-1 win Saturday night over the Tampa Bay Lightning was nothing short of a statement game.
Right off the get-go, the Oilers were the better team and there were few moments when that didn’t appear to be the case.
“I liked the result tonight. I thought it was a total team win, (we) got contributions up and down the lineup,” said Woodcroft after the game. “I think if you look at the two games as a whole, we gave up 55 shots against… vs the Stanley Cup Champions.
“A lot of good things defensively in both games. Like I said, really enjoyed the result tonight.”
The difference-maker? Without a doubt Connor McDavid. He was once again firing on all cylinders in a game he clearly got up for.
He broke open the scoring ten minutes into the game when he blew by Norris trophy-winning defenceman Victor Hedman, effectively turning him into a turnstile. Make no mistake, did Connor, as he capitalized and broke the game open.
And with 45 seconds left in the second, he made his game felt again when he ripped a wrist shot top shelf on the powerplay to extend the Oilers’ lead.
“I think he’s driven to win — driven to lead this team forward to continually push the needle, or move the needle to get this team where it needs to get to,” said Woodcroft, adding, “I thought he led by example tonight.
“He was extremely dangerous with the puck on his stick. I’ve enjoyed his defensive details over the last while. He scored the first two goals on difference-making plays — they were fantastic goals.”
Things got testy in the third, but the Oilers showed no cracks. Zach Bogosian scored at the 9:42 mark of the third, and right after the goal, Brad Malone gave Bolts defenceman Mikhail Sergachev a bump and all hell broke loose.
What resulted was a Lightning powerplay chance, before Cody Ceci took another penalty sending it to a 5-on-3. The Oilers, however, killed it all off shutting down the Lightning’s last hope of a comeback.
“It’s not a good story unless there’s some drama to it, right?” quipped Woodcroft after the game. “That play, it was a goal against and into a penalty kill and into a 5-on-3, I don’t think it’s scary.
“I think we have the people to get the job done, and they got the job done tonight. I’m proud of them.”
And got the job done they did. It was lead by Leon Draisaitl up front, who scored the Oilers’ third goal of the night, helping kill off that huge 5-on-3.
He and Connor have been getting back to that game-breaking level we are used to. It’s not just them that are making big differences, either, Woodcroft said.
“Those two leaders led the way upfront, then you look at some of the warriors we have on the backend in terms of Darnell Nurse, Duncan Keith, Ceci, these types of guys that really laid it on the line,” he said. “With leadership like that, everybody else followed.”
The Oilers showed everyone in the league just who they are on the national stage: a team that, while bogged down by two injuries to top-nine, difference-making staples in Ryan Nugent-Hopkins and Jesse Puljujarvi, can still play with the best of them in the league.
Edmonton gets two days off before the Detroit Red Wings roll into town Tuesday, followed by Thursday night against the Buffalo Sabres and a Saturday matinee against the New Jersey Devils.

Penalty-plagued Lightning drop third straight game, falter at Edmonton
The last time the Lightning left Rogers Place, they left with the Stanley Cup in tow after defeating the Stars in the 2020 Stanley Cup Final.
The plane ride out of Edmonton won’t be as cheerful following Saturday’s 4-1 loss to the Oilers, the Lightning’s third consecutive loss in regulation.
The last such skid for Tampa Bay (37-15-6) came at the end of last season (May 7-10) with a loss against Dallas and back-to-back defeats at Florida.
The Lightning found ways to kill any kind of momentum against the Oilers. Tampa Bay logged a season-high seven penalties and allowed a season-high 48 shots on goal (16 of which came when the Oilers had the man-advantage) with backup goaltender Brian Elliott starting for the first time since March 4′s win over Detroit.
“We were definitely making it hard on ourselves by taking a lot of penalties tonight,” defenseman Ryan McDonagh said. “You give their top-end guys a lot of puck touches and a lot of time and space, they’re going to gradually get more confidence as the game gets on. It’s on us to be a little better disciplined there and that’ll definitely help our chances as we keep moving forward here.”
The penalties ruined the flow of the game for Tampa Bay, which trailed by one midway through the first period after Connor McDavid scored his first of two goals.
Read more from the Tampa Bay Times’ Mari Faiello here.
Zach Laing is the Nation Network’s news director and senior columnist. He can be followed on Twitter at @zjlaing, or reached by email at zach@oilersnation.com.
Nation Takes
News
Oilers Talk
Recent articles from Zach Laing