The Day After: Connor calls game 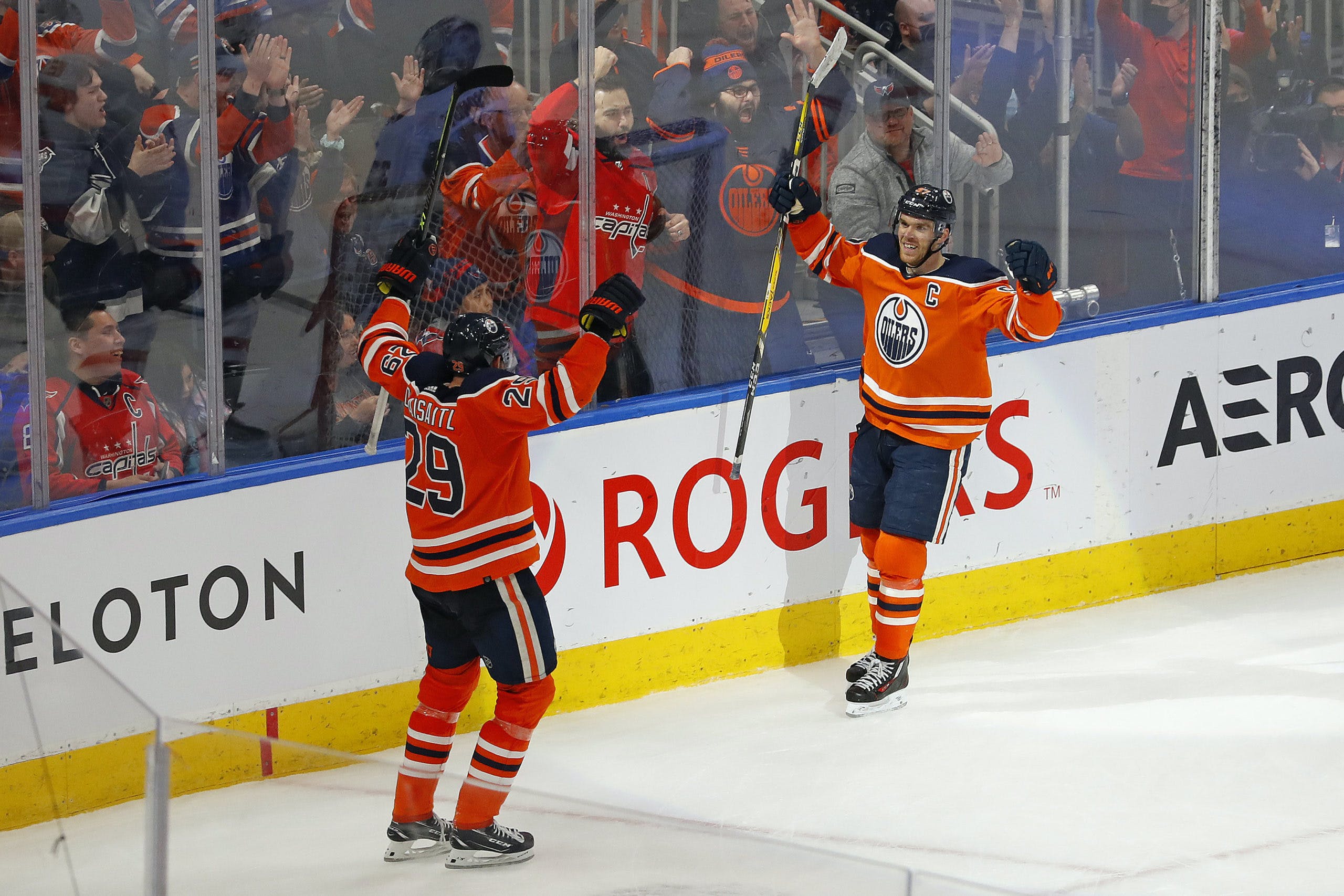 By Zach Laing
8 months ago
It was the overtime that shouldn’t have been, but it was the two points that really matter.
It was a night of ups and downs. Highs accentuated by a hectic first period, a Connor McDavid overtime winner and a two-point night from Brad Malone, and lows much like the one felt when the Caps tied the game with 1.8 seconds left.
Through it all, the Oilers prevailed with a 4-3 win in overtime.
“I thought the effort from the people we had dressed tonight was excellent,” said Jay Woodcroft after the game. “I thought we came out and tried to assert ourselves in the first period, we did that. Their goaltender played a heckuva game.
“We talked in-between that first and second period about outworking a goaltender and not hanging our head because he was making a few saves. I thought our group was resilient tonight and found a way to get it done against a really good hockey team.”
For the Oilers, they made it happen in weird ways. Despite getting down 1-0 2:17 into the second frame, Kailer Yamamoto and Cody Ceci got down and dirty finding the back of the net. The former scored on the powerplay, where he deflected in a Connor McDavid pass while firmly planted in the blue paint.
Then with under three minutes to go in that frame, Derek Ryan and Brad Malone crashed the crease allowing Cody Ceci to somehow bat a puck out of mid-air and into the net.
Malone’s night, however, wasn’t done. He scored a beautiful goal in tight giving him a huge, two point night.
“If I was going to give him any critique tonight it was his 0/3 in the faceoff circle,” smirked a cheeky Woodcroft. “I’m happy for him, I’m happy for our team. I have a comfort level with Brad Malone. I think he plays the game hard, I think he navigates his way around the rink in the right fashion.
“I think he’s gotten better as a player over the last three years, I’ve seen it up close. He’s risen to the occasion in many big moments and that’s what leads to that comfort level — those shared circumstances we have.”
Fighting through adversity on a blatant missed hooking penalty committed by Alex Ovechkin in the final minute that led to a tying Caps goal, the Oilers still got it done. Connor McDavid. Overtime. You know the rest.
Finally, however, the Oilers got rewarded for their hard work snapping what’s been a difficult streak where the team had gone 2-5-1 in their previous eight. The record, for the most part, doesn’t dictate their play over that stretch but at the end of the day, points are what matter most.
While we’ve talked about the moral victories in some of those games, it all came to fruition last night in a game Edmonton truly deserved to win.
At 5×5, they controlled 57.65 percent of the shot attempts, 61.36 percent of the scoring chances and a whopping 69.24 percent of the expected goal share.
Next up? The two-times as Tampa Bay roll into town Saturday for the two-game rubber match. Edmonton will surely be fired up for this one, given what happened in Florida only a few short weeks ago.

T.J. Oshie’s three-point night helps Capitals salvage a point in OT loss at Edmonton
T.J. Oshie did his best to steal the show Wednesday night at Edmonton’s Rogers Place, but the Washington Capitals forward’s equalizer with 1.8 seconds left only extended the conversation. The last line went to Connor McDavid, whose unassisted snipe 3:27 into overtime was the difference in a thrilling 4-3 Oilers win.
Oshie’s three-point night went a long way toward the Capitals salvaging a point, though. And Anthony Mantha nearly earned them two, but his blast in overtime found iron.
“Real happy to get the extra point here,” Oshie said. “… You always want to walk away with two, but I’m happy to get one.”
The Capitals were searching not just for a win but also for a pair of NHL benchmarks — Alex Ovechkin is tied with Jaromir Jagr for third on the league’s all-time goals list. And Nicklas Backstrom needed two points to reach 1,000 — a mark he achieved with an assist on the first of Oshie’s two third-period goals.
“Obviously it means a lot,” Backstrom said. “It’s a big milestone, so I’m very happy about it. Obviously we would’ve liked two points, but we tied it up there, Osh tied up there at the end, which gave us at least one point. So we’ll take that and move on.”
Washington appeared to have regained momentum after Oshie’s first goal tied the score at 2, but the Oilers’ Brad Malone answered a little more than four minutes later for his first NHL goal since December 2015.
The loss snapped a three-game winning streak for the Capitals (31-18-10). Their Western Canada trip continues Friday in Vancouver.
“I felt like we were digging. I felt the guys kept competing and competing and didn’t stop until the end,” Coach Peter Laviolette said. “It’s unfortunate and disappointing when it doesn’t go your way because you work so hard for it to try and get it done and it doesn’t happen. It was a heck of an effort by the guys.”
Read more from the Washington Post’s Samantha Pell here.