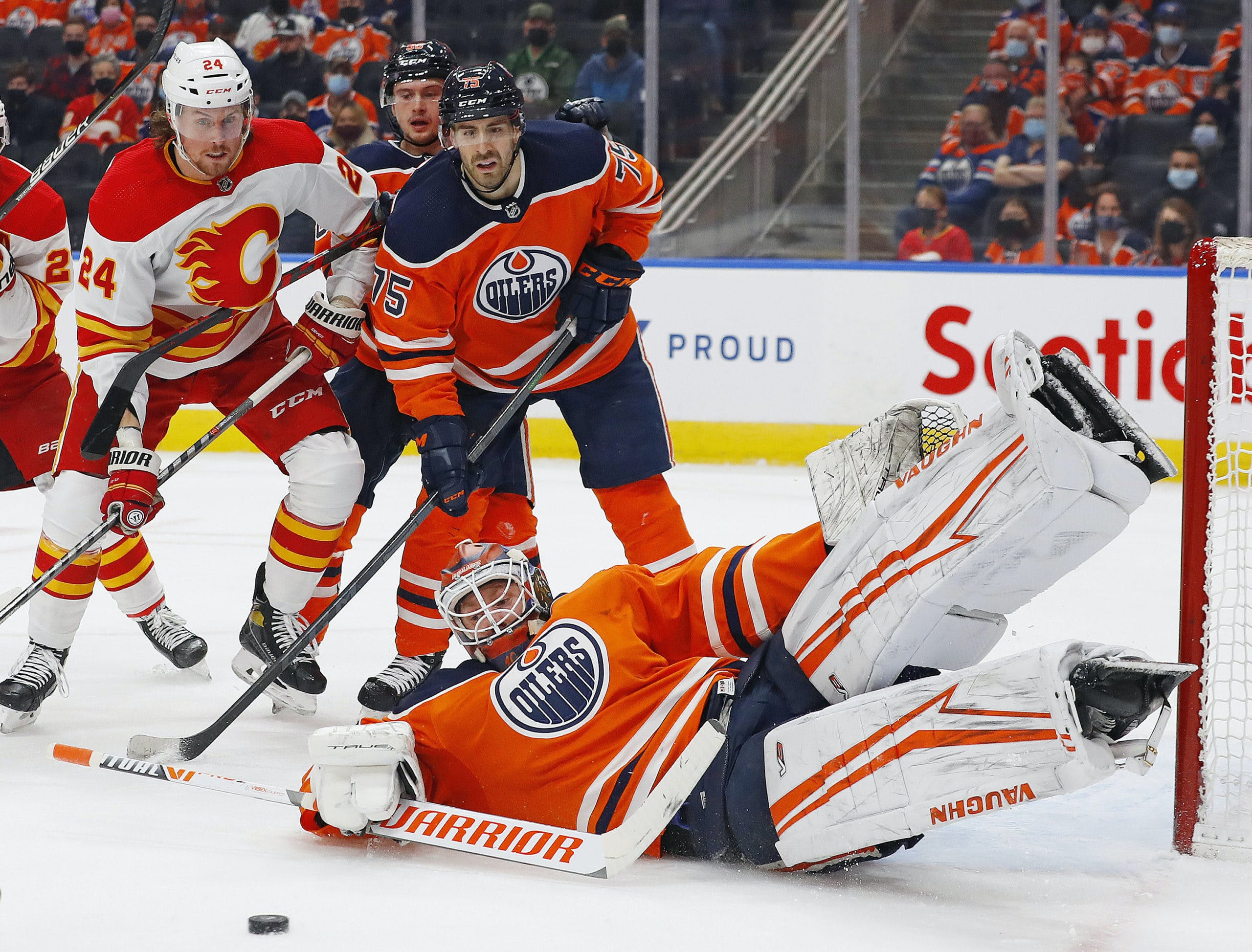 By Zach Laing
1 year ago
Far from perfect.
There’s no better way than that to describe the Oilers gutsy come from behind 5-3 win over the Calgary Flames.
Edmonton’s first frame was far from inspiring and Matthew Tkachuk and Milan Lucic gave them a 2-0 lead. But two second-period tallies on the powerplay from Evan Bouchard got the Oilers right back into the game.
While Noah Hanifin tied it up moments later, it was Leon Draisaitl who got the Oilers the game-winning goal and the empty net cherry on top. The big German was feeling it all night long generating chance after chance before eventually finding the back of the net.
The true star of the show, however, was Mikko Koskinen. He stood on his head for the Oilers stopping 44 of 47 shots faced on the way to the victory.
“He saved the game for us. He was our best player, not even close tonight,” said Draisaitl of Koskinen, who sat beside him for a post-game presser. “It’s great for him, we love him in the dressing room, we love playing for him.”
“I know this probably feels awkward right now,” he added with a chuckle.
It was a night where the clouds were lifted. Spirits heightened. After all, who doesn’t love beating the Calgary Flames?
“He made big saves, he made big saves for us,” said Oilers head coach Dave Tippett of Koskinen’s play. “He gave us a chance to win and all the credit to him. There’s a lot of pressure on him right now and he stepped in. Saturday night against your biggest rival on hockey night in Canada. There’s a lot of pressure.”
Koskinen rose to it in what was arguably the most important game of his career.
For the team, it offers them some breathing room. A chance to celebrate their first victory in a month.
The game itself was far from perfect, but it’s something to build on. Edmonton looked flat in the first and while they controlled the pace of play in a wide-open second period, they fell flat in the third. That’s where Koskinen played his best hockey.
Even on the goals against, Edmonton was too soft on the Flames entering the zone. No bite, no aggression, no determination to stand their ground.
It’s a banged-up group still, no doubt. Ryan Nugent-Hopkins is on LTIR, Mike Smith on IR, Tyson Barrie day-to-day, Zack Kassian sick, Zach Hyman and Stuart Skinner in COVID-19 protocols.
But at the end of the day, a win is a win. And while it shouldn’t overshadow the bigger picture at hand — the fact the Oilers are still a deeply flawed team that will likely have more faults moving forward — it’s nice to have a bit of room to breathe.
For Edmonton, the road isn’t about to get any easier. There’s a “soft stretch” that will see the team face the Vancouver Canucks Tuesday on the road, Nashville at home Thursday then kick off a three-game road trip through Montreal, Ottawa and ultimately Washington on the 2nd.
But then, the going gets tough. Between the 8th and 20th of February, the Oilers will play eight games in 13 days. We’ll see what this team is made of sooner rather than later.

Flames fail to capitalize on chances as Oilers battle back for win
Most of the province — well, at least north of the Donut Mill in Red Deer — had been consumed with the spiralling Edmonton Oilers, losers of seven straight and facing a whole host of issues including the play of goaltender Mikko Koskinen.
With that, most assumed that Saturday’s result of the Battle of Alberta would be a foregone conclusion: the Calgary Flames would, could, and should, likely, win this one as they tried to build on an emotionally charged win over the Florida Panthers earlier in the week.
Not the case.
It appears the Flames still have some work to do after a 5-3 loss to their provincial rivals, who beat them in the special teams game on this night and, in the end, with one key play in the third period that sealed the deal. The Oilers served Calgary its fifth loss in the last six outings, giving the club just five wins in its last 14.
And Koskinen? Well, the Flames threw everything at the 33-year-old Finn, including 17 shots in the third period. He turned them aside to preserve the victory.
“For whoever was complaining about the Oilers goaltending, he probably kept them in the game, that’s for sure,” said head coach Darryl Sutter, dryly, during Calgary’s post-game Zoom call with reporters. “We had lots of opportunities to go up and change momentum lots of times and just couldn’t put it in.
“Even on their winning goal, we have it in there for a sustained period of time and our defencemen were involved in it. But then, when we got the puck back, especially when their top guys are on the ice, after they’ve made a couple really good saves, you have to get the puck back behind the net again.”
Leon Draisaitl, on a mission the entire game, scored the game-winner by driving to the net through Chris Tanev with 5:31 remaining and an empty netter to finish things off.
The Oilers only had five shots on net in the third period, which is not necessarily going to win you games every night. And even thought it feels like the Flames took a step back instead of a step forward, there was a lot to like.
“They’ve got two guys that, at the end of the day, are going to be in the top five in scoring,” Sutter said, referring to Draisaitl and Connor McDavid, who recorded two assists on Saturday. “You have to really stick to the game plan and can’t give them those opportunities.” – Kristen Anderson, Calgary Sun