The Day After: Three overreactions from the Oilers’ first preseason win 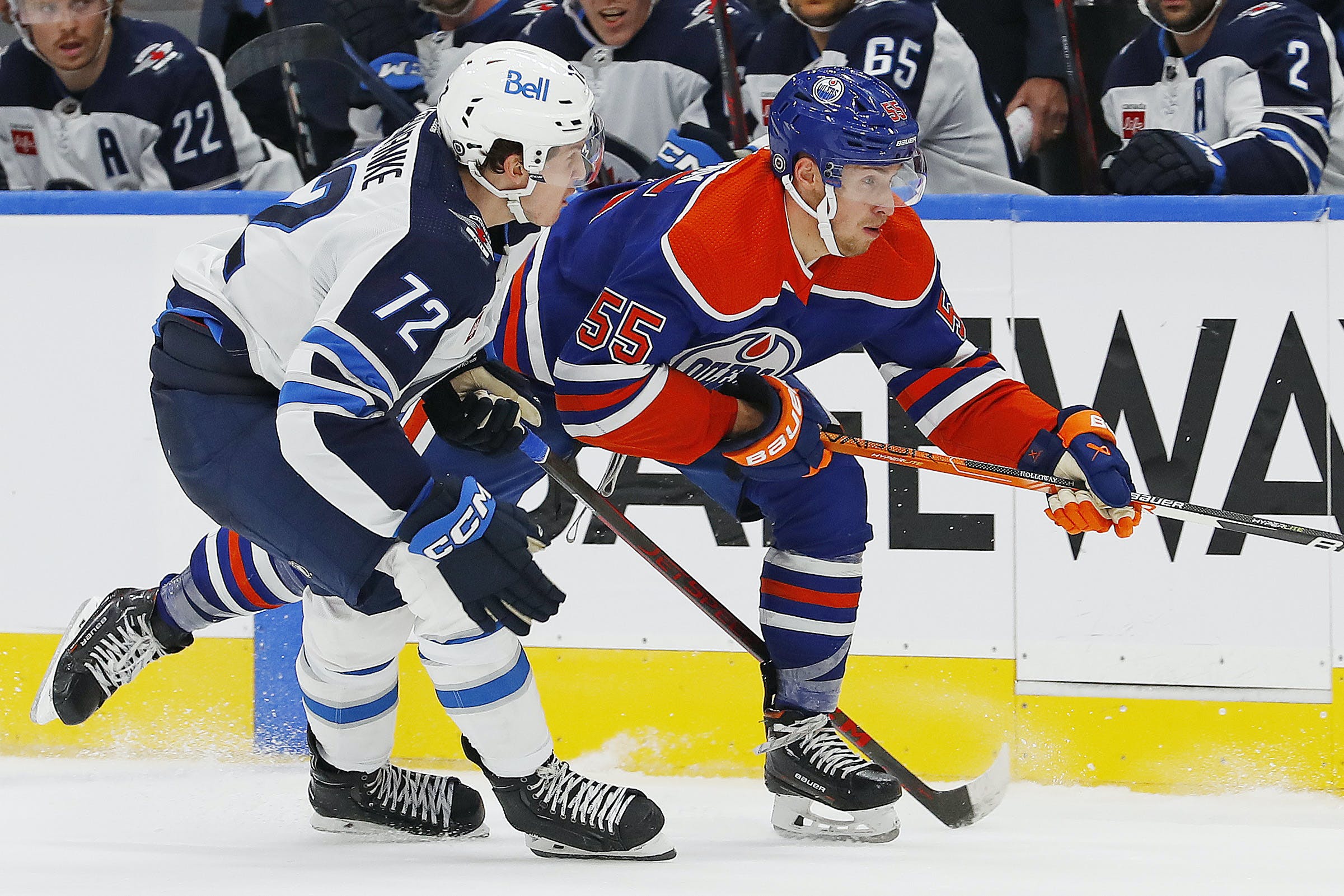 By Zach Laing
4 months ago
Hockey season is officially upon us.
Last night, the Oilers got the preseason kicked off with a 4-0 thrashing over the Winnipeg Jets.
Is it just me, or did this offseason absolutely fly by? Truth be told, it really did. It was 111 days between game four against the Colorado Avalanche and last night’s preseason opener.
It feels great to have hockey back, so let’s overreact to the Oilers game from last night, shall we?

There may not be many questions about who could be The Answer this preseason. Dylan Holloway just might run away with it.
He drew in on the Oilers’ second line alongside Brad Malone and Jake Virtanen and looked like one of the best players on the ice. Right off his first shift, he played with speed and physicality. He had a number of good looks in near the net and had multiple setups. In the third period, he got rewarded tipping home an absolute blast from Evan Bouchard. Credit where it’s due for Holloway because Bouchard got absolutely every bit and somehow, the rookie was still able to get a stick on it to tip it home.
Holloway was dominant on the ice. In all situations, he took six shots on next, nine shot attempts, had five scoring chances, laid three hits and had three takeaways. At 5×5 with Holloway on the ice, the Oilers controlled 62.07 percent of the shot attempts and 60 percent of the scoring chances.
Is it an overreaction to say he’ll win the Calder? Of course it is, silly, but that’s what’s fun about today’s article. It’s preseason, after all, but would it be out of the question for him to score 15 goals and 30 points this year? I don’t think so. This kid is here to play and I don’t see a world where he isn’t on the opening day roster.

Evan Bouchard will finish top five in scoring among defencemen

The Evan Bouchard era is upon us and this year will be a breakout campaign for him. In his first full season of NHL action last year, Bouchard scored 12 goals and 43 points. He was the third Oilers defenceman to score 40 points in a season since Sheldon Souray and Tom Gilbert put up 53 and 45 points, respectively, in the 2008-09 season. The other two since to score 40+ were Darnell Nurse (2019-20, 41 points) and Tyson Barrie (48 points, 2020-21 and 41 points in 2021-22).
Last night, he looked like he took another step forward and had a big assist on Dylan Holloway’s third-period goal. Will he finish top-five in scoring among defencemen? Unlikely.
Here are the top five in scoring among NHL defencemen in each of the last three years.
I think last year was a bit anomalous in terms of Josi’s production, but that 85-90 point range is going to be where the top rearguard sits for a while in thanks to Cale Makar. That being said, we see a floor of around 65 points for defencemen to finish in the top five for scoring.
While he might be hard-pressed to hit that mark without powerplay time, he’s likely to fall in the 50-55 point range the way things are trending.

Stuart Skinner will post a .920 save percentage or better and play over 30 games

This one might be a stretch. Skinner drew in for the first half of last night’s game looking great doing so as he turned aside all 19 shots that he faced.
Skinner’s going to be on the Oilers roster this year playing in a backup role, but it wouldn’t surprise me to him have a really solid year. The 30-game mark is very realistic for him to him, but the .920 save percentage might be a bit of a stretch.
That being said, Mikko Koskinen posted a .917 save percentage in 2019-20 playing in 38 games. In 2016-17, Cam Talbot had taken the lion share of the games — 73 to be exact — posting a .919 save percentage. Laurent Brossoit backed him up going 4-4-1 with a .928 save percentage.
Obviously, there’s a much smaller sample size with Brossoit, but he was 23 years old that season which is the same age Skinner is now. It wouldn’t surprise me to see Skinner finish with a .910 or better.