The Day After: Don’t let your eyes deceive you… 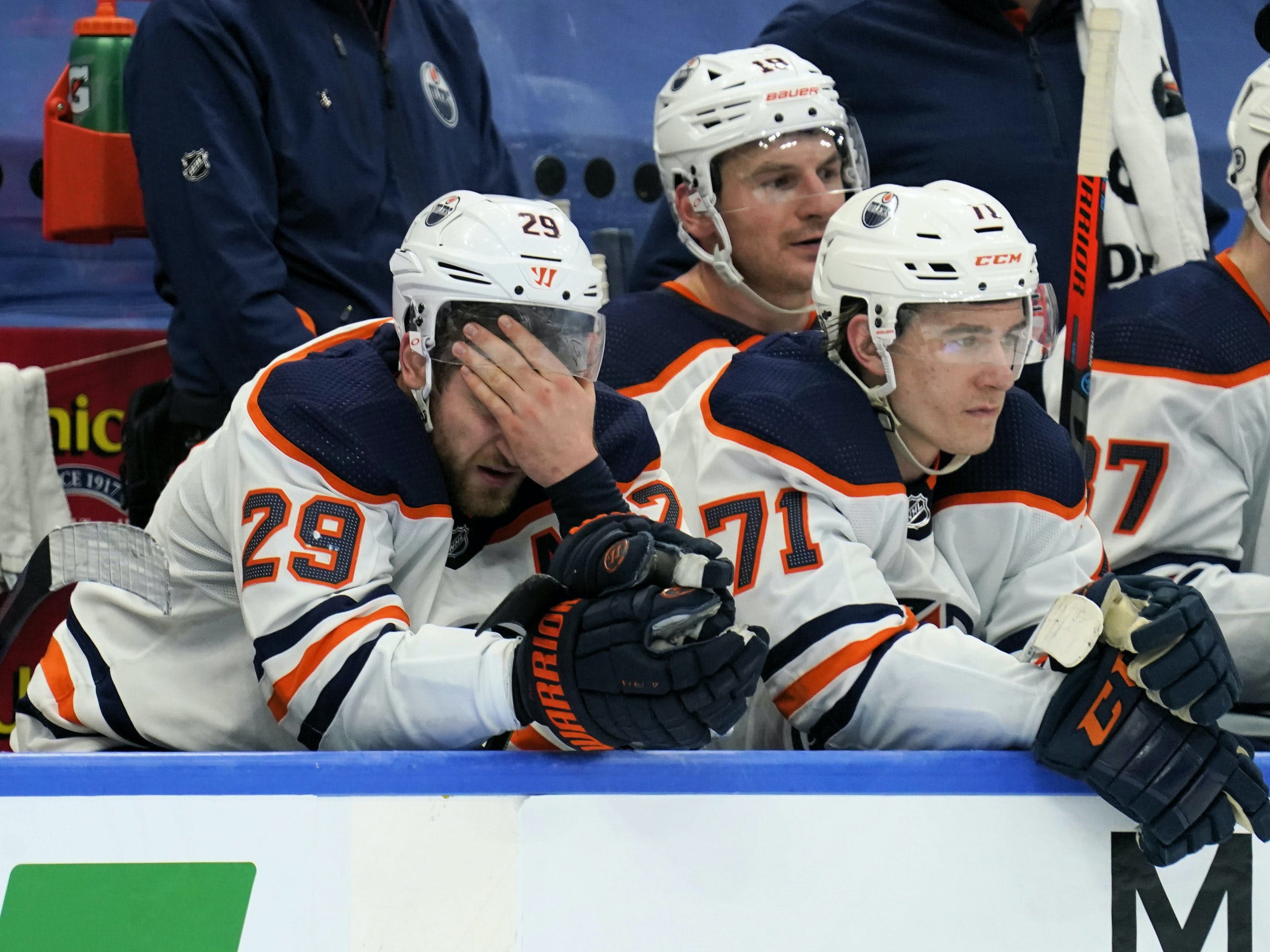 By Zach Laing
10 months ago
Things are just not getting any better for the Edmonton Oilers.
On a night where an already depleted team lost Connor McDavid, Derek Ryan and Tyson Barrie to COVID-19 protocols, they took another hit losing 4-2 to the Toronto Maple Leafs.
The two teams met Wednesday evening at the Scotiabank Centre and if you watched the game like I did, you’d think the Oilers played a really good game — one they probably deserved to win. If you ask Oilers head coach Dave Tippett, he felt the fight was there.
“We had lots of try in our game. Lots of try, lots of push, people trying to have an impact on the game which is good to see,” said Tippett, who added, “but you can’t get that play made that makes a difference on the positive side for us.
“It’s a game where every play counts and you need you need that play to get you over the top. They got it, we didn’t.”
But when you peel back the onion, your eyes will burn.
The Oilers played from behind virtually all night, and even when they got a 2-1 lead partway through the first, the team didn’t keep up the pressure. When you look at 5×5 shot share, expected goal share, or scoring chance share, the Leafs controlled play all the way.
It’s a tough scene.
The Oilers allowed the first goal of the game, once again, when a William Nylander shot bounced off the back wall and Mike Smith accidentally kicked it into his own net.
Brendan Perlini and Leon Draisaitl got the game back not long after, but with under 30 seconds left in the first TJ Brodie tied it back up at 2.
And from there, the game was virtually over. Edmonton had a few looks, a few good chances and won some battles, but the truth of the matter is the Oilers weren’t really close to winning this game. After their second goal, they only generated 1.28 expected goals — hardly good enough to keep them in it.
Toronto did what they were expected to do and gave the Oilers another loss.
For Edmonton, they now have time to sit with it. To stew on it. To let the emotions of what needed to be a win burn with them. They aren’t scheduled to play again until next Monday when the Ottawa Senators roll into town, but that game could very well be cancelled too.
Then? Well, the Oilers don’t play again until the 20th. Postponements have seriously hampered this team and their chances at getting the ship righted.
Whether Dave Tippett is still behind the bench whenever the Oilers return to play or not, the team clearly needs to do something to try and walk out of a game with two points.
Because at this point, Tippett has lost 11 games behind the Oilers bench and the team is somehow holding onto the second wild card spot. They’re a far cry from the club that sat atop the Pacific when December started.

Hot Mikheyev scores winner to send Maple Leafs to fourth consecutive victory
Ilya Mikheyev continues to thumb his nose at the injury that kept him out of the Maple Leafs’ lineup until mid-December.
The winger, who was on the sideline for the first two months of the regular season as he recovered from a broken thumb and subsequent surgery, hasn’t required much time to find his touch.
Mikheyev’s power-play goal in the third period was the winner as the Leafs beat the Edmonton Oilers 4-2 in an empty Scotiabank Arena on Wednesday night.
Mikheyev, whose shot eluded Oilers goalie Mike Smith and found the top corner at 11:25, has three goals in three games since returning.
“Little bit lucky, little bit work,” said Mikheyev, who led the Leafs with six shots on goal. “If I have a chance for a shot, why not? Guys tell me to just keep shooting.”
Alex Kerfoot scored into an empty net with 15 seconds remaining.
The Leafs have won four in a row and five of their past six. The reeling Oilers, who played without Connor McDavid, have lost five in a row and have two wins in their past 13 games.
Earlier in the day, McDavid was placed in COVID-19 protocol with teammates Tyson Barrie and Derek Ryan. The Oilers also didn’t have Ryan Nugent-Hopkins, who is out with an undisclosed injury.
William Nylander again was a catalyst, recording two assists to run his point streak to seven games. He has 19 points in his past 12 games.
“He just continues to become more well-rounded,” captain John Tavares said. “The consistency continues to get better for him. He wants to be a difference-maker. His skill set is tremendous.” – Terry Koshan, Toronto Sun