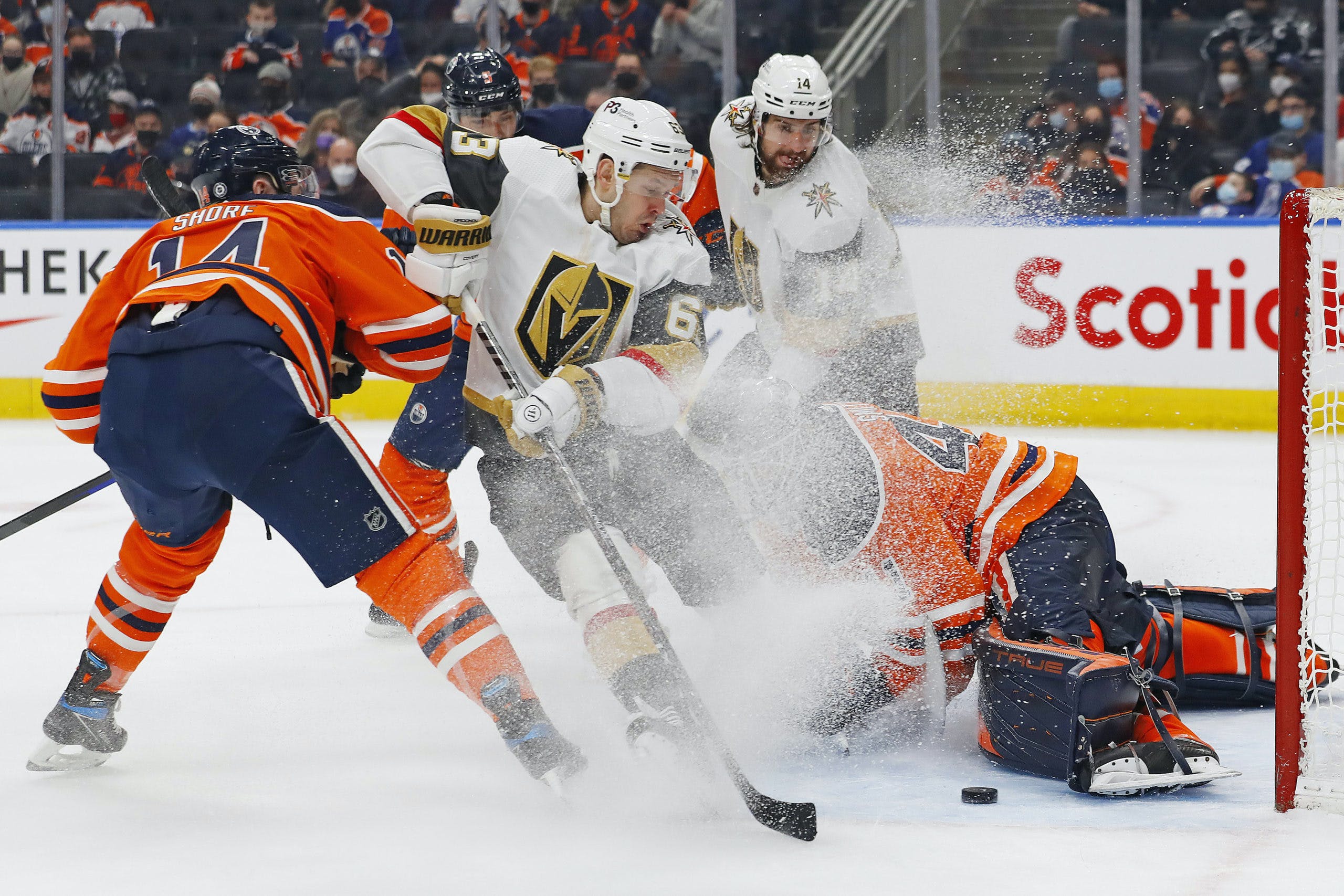 By Zach Laing
11 months ago
Oh boy. Final score: 4-0 Vegas.
Maybe, just maybe, we should’ve seen this coming. Maybe we should’ve seen Mike Smith struggling mightily in his first game back. Maybe we should’ve seen the Oilers still being unable to win first periods.
Maybe we should’ve seen the Oilers be unable to come back in a game they really needed to.
Tuesday night’s game against the Vegas Golden Knights which kicks off a stretch run of 40 games in 81 days was far from inspiring. Mike Smith couldn’t buy a save when he needed to. Tyson Barrie looked as inept as ever. Edmonton looked as uninspiring as ever.
These problems aren’t new, however. Smith has barely been healthy this season and when he has played, he’s posted an .893 save percentage, a 3.8 goals against average, and a 2-3-1 record.
Vegas came in and played a tight game doing exactly what they needed to by scoring early and holding onto that lead. Moments of confidence last night were few and far between.
While the Oilers controlled the shot attempt and expected goal share virtually the whole way, but Vegas did a great job in limiting those dangerous chances and blocked 26 shots by the end of the day.
It was, once again, those small “brain cramps” that cost Edmonton. Like Barrie firing a shot off the shinpads of a Vegas defender on the powerplay springing two back the other way leading to a goal against. Or Darnell Nurse missing the net high and wide only for Barrie to get burnt once again. Or 14 seconds into the third when nobody could track a loose puck.
The problems run deep for this Oilers team, and I probably sound like a broken drum at this point, but man… something needs to happen. This team doesn’t have a goaltender they can rely on and worst of all, they have no pushback.
Smith got railroaded late in the second period in his own crease and the players in front of him just didn’t seem to care. But with three minutes left in the game, already down 4-0, Nurse grabbed Janmark after he collided with Smith. Too little too late in my eyes.
Edmonton has a chance to right the ship tonight with the Chicago Blackhawks coming to town. Let’s see what kind of effort they put together.

Alex Pietrangelo gets 500th career point in Golden Knights’ win
Defenseman Alex Pietrangelo recorded his 500th career NHL point with a goal in the second period, and the Golden Knights defeated the Edmonton Oilers 4-0 on Tuesday at Rogers Place in Edmonton, Alberta.
Goalie Laurent Brossoit started in the first of back-to-back games and recorded his third career shutout.
The Knights shook off the rust in their first game after the All-Star break and scored three goals on their first nine shots en route to their ninth win in the past 11 road games (9-1-1).
Pietrangelo put away a feed from Jonathan Marchessault to give the Knights a 3-0 lead. He is the 13th active defenseman to reach the 500-point milestone.
Brett Howden scored midway through the first period, and William Karlsson added a short-handed goal to help the Knights move 10 points ahead of the Oilers in the Pacific Division in the standings.
Edmonton, which has four games in hand on the Knights, saw its six-game point streak end.
Howden has goals in four straight appearances to go with a five-game point streak (4-3-7). His eight goals are one shy of his career high set in 2019-20 with the New York Rangers.
Karlsson tallied the Knights’ league-best eighth short-handed goal with 3:05 remaining in the first period when he finished off a two-on-none with Reilly Smith.
Smith added a goal 15 seconds into the third period for his second point.
The Knights had three players back in the lineup with center Chandler Stephenson and defenseman Dylan Coghlan cleared from COVID-19 protocol after missing the past two games. Defenseman Nic Hague also returned after he’s been in and out since Dec. 21. – David Schoen, Las Vegas Review-Journal