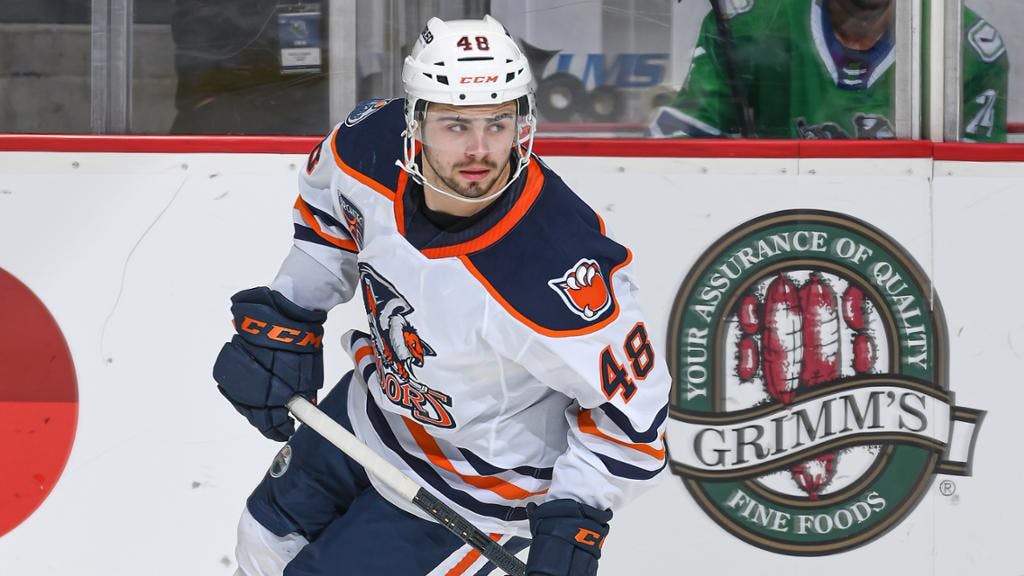 By Bruce Curlock
9 days ago
Those who follow me know that I have been very critical of the coaching staff in Bakersfield surrounding the deployment decisions of the Oiler prospects. In particular, I’ve highlighted issues with all of the twenty-year-old rookies who joined the team this year. However, the player who received the harshest treatment in my opinion was Carter Savoie.  Savoie spent most of the season before the Christmas break welded to a fourth line that lacked skilled players. He rarely saw the ice on any of the powerplay rotations. When he made mistakes that were clearly borne of inexperience, he was helping to a much more stringent account than others with very limited minutes in games after mistakes and even a healthy scratch. To compound the matter, Savoie started late due to an injury in the prospect tourney in Penticton and missed some additional time with an injury during the season. Then came the Christmas break and everything changed. Plus there is another German looking good as an Oiler prospect…..wait Maximus Wanner is from Estevan, Saskatchewan. We talk about all of them below.

Who Caught My Eye This Week?

Savoie is always going to be a highly followed prospect for the Oilers given he was born in St. Albert and had two spectacular seasons with the Sherwood Park Crusaders of the AJHL. So when he started slow for all the reasons noted above, there was lots of focus. For me, I simply thought he needed to play with more skilled players in more skilled situations. Watching Savoie in the AJHL and at the University of Denver, it was clear that Savoie was not going to be a driver of play. He is a complimentary player who requires others to do more heavy lifting. What Carter Savoie can do is score. This week he got put on a line with Brad Malone and Xavier Bourgault and also played on the first powerplay. Guess what happened? Carter Savoie scored. A lot. In his last five games he has four goals.  Here is every one of those goals.
For good measure, here is a cheeky little shoot-out goal he scored in the loss to Tuscon that will not show up on the score sheet, but is another illustration of his goal-scoring prowess.
More so, what impressed me this week was Savoie’s commitment to battle for loose pucks all over the ice. I personally think it was him getting assignments and linemates that helped his confidence. Some people may not like to hear that, but that is a fact for many players. Remember, you have a twenty-year-old rookie pro who has been battled through a tough first half. The coaching staff gave him a shot in the arm and it led to this type of response.
However, I want to caution evaluators of Carter Savoie. This is not Dylan Holloway in terms of checking. He’s not a crash and bang, engage hard on the body. He takes a more cautious approach and uses his stick to attack the puck. I think this frustrates people to some degree because it appears lazy, but I don’t believe that is the case. Savoie is actually very effective when, and I emphasize when, he moves his feet to the spots where he can check. Watch this clip as an example.
Carter Savoie had his best week as a pro. His coaches have really helped his cause. It’s been great to see.

When a player is drafted in the seventh round, 212th overall, and is described as a big, lengthy defence-first, defenceman, you expect to see some plays like these two clips below. A physical player who uses his size and reach to separate players from the puck and then make sure they remember that it is no fun to attack his side of the ice.
However, in what is becoming a trend with these COVID drafts, Maximus Wanner is developing into something much different than when he was drafted. Wanner was a 2021 draft pick and in the height of Covid got to play a total of seventeen games in his draft-eligible year. I say this is a trend because it is clear that these COVID draft years are going to elicit some players who far exceed their draft position. Wanner is assuredly one of them.
Now I would like to stop here for a moment and explain the concept of exceeding your draft position. Often I have people comment “well he won’t make the NHL anyway.” These people are, by the math, mostly right. However, it is very important for an NHL team to have every draft pick exceed their draft position. It can lead to better minor league competition amongst prospects, possible spot call-ups when injury is an issue and useful trade pieces to acquire other assets. For example, what if the Oilers decide their happy with their defence on the right side and trade Wanner? If they can elicit a 3rd round pick because of his great play, that is a win. It isn’t always about making it to the NHL and playing 400 games.
Now back to our regularly scheduled programming.
What has changed with Wanner? Well, Maximus Wanner has developed offence in his game. In his draft plus one year, he had six goals and 17 assists for 23 points in 55 games. This year he has already produced eight goals and 21 assists for 29 points in 37 games. For me, watching Wanner the last two seasons, the biggest difference is the skating improvements. While he always had a long powerful stride, his lateral mobility was clunky. Again, this was likely a function of being young and 6’3″. The first spot where I saw a  noticeable change was at the Young Stars Classic where Wanner was the second-best defenceman behind Michael Kesselring. That improved skating has continued through this junior year. Here is a clip below that illustrates his ability to move his skates very quickly from east to west allowing him to evade pressure and make plays to create opportunities for his teammates. He does a wonderful job walking the line in tight quarters. Has a great pinch that helps his team. Finishes by taking a pass and makes a subtle shift to make a pass to a teammate open for a shot. This is much improved.
In terms of puck skills, I think people tend to underrate Wanner. I believe he has competent skills for a big, young defenceman. Here is a clip of his ability to move the puck laterally with ease and then when on the forecheck, win the battle, gather the puck and make a nice pass to a teammate.
The final note, and maybe my favourite part of Wanner’s game, is his compete level. This clip shows him winning the puck three times, only to have teammates fail to clear off passes from him. He then takes a slash net front followed by getting tripped behind the net. So he decides, after a fourth failed clear, to take matters into his own hands and exits the zone himself.
Now Wanner has lots to work on when he gets to the pro level, but when you watch the whole clip below of his OT goal this week, you see what Oilers scouts no doubt are smiling about.

The big Finn finally was sent down this past week from the Oilers and got into two games in Tuscon. This was a much-needed reassignment because 24-year-old prospect defenders need to play and need to play a lot. For those who are enthusiastic about the play of Vincent Desharnais, you should be very excited about Niemelainen. This is another big-body, physical defenceman who is a full two years younger than Desharnais. There is lots of time to develop and given his youth compared to Desharnais, this should excite Oiler fans. Especially, given he is a 6’6″ defender who won the Oilers’ fastest skater competition recently. Now we also saw what Niemelainen needs to work on. Lots of reps to handle pucks and create offence for him and his linemates. This week saw some positive steps. First, Niemelainen decided to score goals. He had two of them, both bombs and here they are.
Now we do not expect Neemo to challenge McDavid or, lately, Klim Kostin in terms of goal-scoring prowess. What we want to see him do is continue to improve puck skills. We saw some good signs here this week. Watch this tight turn and then explosive move up the ice for the exit.
We also saw some of what we saw in Edmonton. Here is an example of where Nemo really needs to take a breath and work on his patience with the puck. Look at the two lanes he has to make controlled passes and look at what he chooses to do with the puck.
It is this play that needs to be eliminated from his game. It is very controllable and he certainly can excel at passing skills. It just requires more and more reps to develop his confidence. When that happens, you are going to have a left-handed, better skating, Vinny Desharnais.

Tyler Tullio is starting to figure out the AHL. When he was drafted, I said this is one of the smartest junior hockey players I have watched. He has an incredible understanding of plays in all zones before they develop, Again, much like Bourgault and Savoie, he started slow, but he is now really coming. What makes this more exciting is that Tullio’s whole game is built off his motor. He’s a smaller player, so beating players to pucks allows him a chance to be effective. Now that he is figuring out how to play in this league, he’s able to use that motor to great effect.  Watch this clip as an example.
He reads what is coming and just explodes to the puck. Wins it after taking a crosscheck and establishes zone possession for the Condors. He is doing this on the majority of his shifts now.
In terms of scoring, this week Tullio matched his three-point effort from last week. Overall, he has six points in his last five games. This week he scored the OT winner against Tuscon in a great come-from-behind win.
He’s found a really connection with Raphael Lavoie and the two have been the hottest combination in Bakersfield. Both have taken material steps in their prospect development. This week Tullio had the edge.
That’s it for this week folks. As always, send your feedback to me @bcurlock and thanks for reading.
Featured
Nation Takes
News
Oilers Talk
Recent articles from Bruce Curlock