The Edmonton Oilers Prospect Report: Raphael Lavoie Is Not Having Any of It 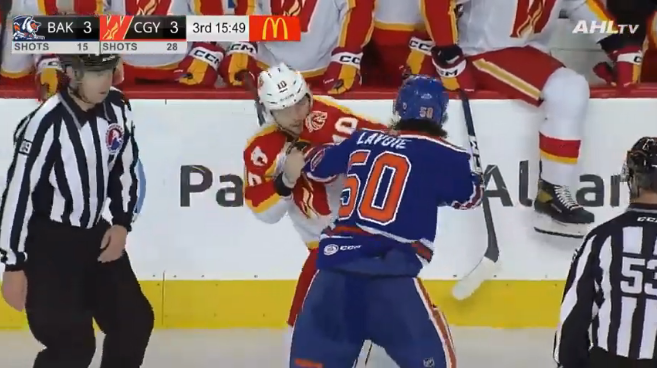 By Bruce Curlock
19 days ago
Welcome everyone to the Edmonton Oiler Prospect Report for January 15, 2023. The week for Oilers’ prospects was quite busy coming out of the Christmas break with most prospects playing three or four games. More importantly, there were some very impressive performances – some new, but some repeat performances also. This week, it was the forwards turn to showcase their talents. Most of this year has been led by defencemen like Markus Niemelainen, Michael Kesselring and, lately, Vincent Desharnais. Even Maximus Wanner in the junior ranks has been turning in some impressive work. The forwards decided enough was enough this week and took charge. The headliner was Raphael Lavoie who may have reached a turning point this season after what appeared to be a dust-up with his coach in, of all places, Calgary.

Who Caught My Eye?

As I said last week, the more we write about this guy, the better it is for everyone including the Edmonton Oilers. Since just before the break, Lavoie has been really pushing his play. This is much the same as he did last year when he went on a twenty-game run of quality play. However, this week felt different for me regarding this player. It all started with a dumb tripping penalty against the Calgary Wranglers on Tuesday night. That penalty led to Lavoie being benched for the remainder of the second period. When he returned in third period, he was moved to the fourth line and off of a very productive top line with Brad Malone and Justin Bailey. This is what happened in the first two shifts of the third period with that line.
I was at this game and what was far more intriguing was Lavoie’s reaction after the fight. He clearly was frustrated at being benched and this video shows a little bit of Lavoie clearly angry and was directing it at his bench. I speculated at the game that it looked like it was coach Colin Chaulk who was in the firing line. Whether Lavoie had a right to be frustrated or not, I was a big fan of his reaction.
I would add that when he returned to the bench after the fight, every player rose and tapped the boards and Chaulk spent some time chatting with him. Lavoie did not seem to be too interested in the discussion, but it spurred his play.
Lavoie kept it going the rest of the week using his frame and his hands to be a constant threat. He ended the week with two goals and two assists in four games and now has ten points in his last ten games.
As I said in a tweet a couple of weeks ago, he can have the success Klim Kostin is having in the NHL, but he needs to play hard and consistent hockey from shift to shift. Look at a couple of examples of what happens when Lavoie plays an inspired brand of hockey, Watch how hard it is for defenders to handle someone of his size and skill.

As of the writing of this article, Matvey Petrov is seventh in OHL scoring with 54 points in 39 games. On a points-per-game basis, he is twelfth at 1.40. Let’s take a second to appreciate this fact. The OHL is the best non-professional league in the world. It is not close. Matvey Petrov, who was a sixth-round pick in 2021, is absolutely dominating this league offensively. What makes this more impressive is that Petrov is doing a lot of his work at 5×5. Of the top twenty scorers, Petrov has the twelfth most power play points. He is averaging one point per game at even strength. This is an impressive development for someone who was widely viewed as an offence-only player in his draft year.
This week was just a continuation of his excellent offensive performance. His performance was a little more goal-oriented than his season has been to date. Last week, I applauded his efforts to be a distributor as a positive development for Petrov’s growth, but his ability to score is tantalizing. Watch how well he finds quiet space despite being a player other teams are keying on.
Now that doesn’t mean he forgot to set up his teammates. Here is a tremendous pass for an assist from so far in the corner, we cannot see him. Trust me. It’s Petrov.
One of the things I continue to look for with Petrov is a willingness to play inside. As noted with both goals above, he is doing it more often. Last season he relied more often on his shot from the perimeter.  This year he is moving with and without the puck in the middle of the ice more often. I believe this is why his assist rate is higher this year. He’s getting into tighter spaces and when he’s attacked, he is dishing off to teammates for opportunities. I think this is very important for him as a pro. He will not have the time and space he has now to get his shot off. So if he can be more dangerous as a passer that will benefit his teammates, but also him going forward,

Tullio has struggled through the same ups and downs as the other twenty-year-olds, Savoie and Bourgault, this season. Limited minutes, healthy scratches and offensive struggles have been part of Tullio’s rookie season. This week, there was a noticeable difference. Tullio finished the week with two goals and an assist along with nine shots in four games this week. He was paired with Raphael Lavoie and the two players found instant chemistry.
Here is another example of Tullio and Lavoie with Esposito in on the magic. Again, Tullio has excellent offensive instincts and when his motor is going he can be very dangerous in the offensive zone.
Tullio also showed off his underappreciated, but absolutely wicked shot on a great set up from Lavoie. I continue to wait to see him use his shot more frequently because I do believe it will give professional goalies trouble. Hopefully, that comes with the experience gained.
Finally, the part of Tyler Tullio’s game that I believe will drive his success was showcased this week. He’s an absolute pain to play against and he is willing to sacrifice his body at any time. Here is one of my favourite clips of the week. It is this part of his game that makes him a more effective player and, if he makes, it is this type of play that will make him an Oiler fan favourite.

My kids watch these zombie shows. The premise is it is incredibly hard to kill them. Well, Noah Philp might not be a zombie, but his intestinal fortitude is off the charts. No matter what role he plays or who he plays with, Philp makes an impact each game. For most of this week, Philp was on a fourth line with Greg McKegg and Dino Kambeitz. No big deal to Philp. All he did in four games was score twice and add eight shots on net. By the end of the week, Philp had been given some more gifted wingers and in the shootout loss against Tuscon was a prominent player at the end of the game and in overtime. Philp’s goals this week were typical of Philp.
For me though, it remains shifts like this one below that will get Philp some notice from NHL clubs. He’s such a defensively conscious player, but yet still has enough speed and skills to get on the attack once his team has control of the puck. He’s not afraid to try for controlled entries and he’s very successful in doing so. Philp shows me more facets to his game each week and all of them are positive.
Again, Philp needs to score at this level to get looks. It is starting to come with three goals in his last five games. As that develops, he will get some chances because he is a big-body, right-shot center who pays attention to defence.
That’s it for this week everyone. Thanks for reading. As always, you can find me on Twitter @bcurlock and writing for the mighty Oilersnation. See you around the rinks.
Featured
Nation Takes
News
Oilers Talk
Recent articles from Bruce Curlock