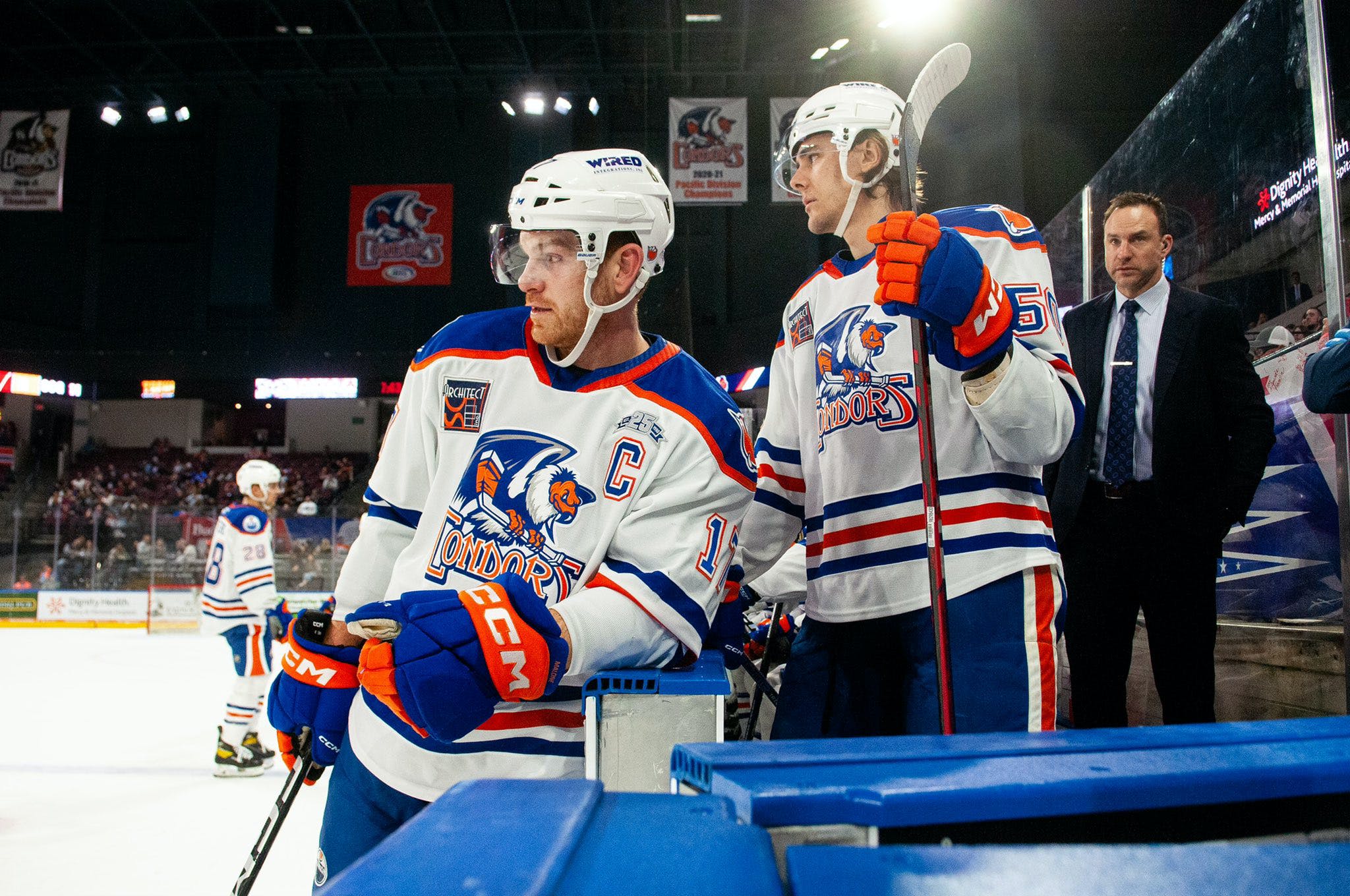 By Bruce Curlock
25 days ago
The week between Christmas and New Year’s Eve can be a quiet one for non-NHL action. However, for most of the Edmonton Oilers prospects the week, when us fans are in food comas, it was quite busy.  In the AHL, the Condors played three games after the Christmas break and some new line combinations led to some excellent developments. In the junior ranks, a 6th-round draft pick continues to remind scouts of the mistake they might have made.  For this week, that prospect is where we begin.

Who Caught My Eye?

Petrov has consistently outplayed his draft slot since he was drafted and this week was no exception. In three games this week he ended up with a goal and five assists. Petrov now stands eighth in OHL scoring with 46 points in 34 games. On a points-per-game basis, he stands 15th at 1.35.
In terms of his offence, I continue to be impressed by Petrov’s point totals distributing the puck. The early reports on Petrov prior to being drafted focused on him being a scorer with a strong shot. This was reinforced when he scored 40 goals in his rookie campaign with the North Bay Battalion. Certainly, you do see that in his game as illustrated by his only goal this week.
However, he has really blossomed as a distributor of the puck this season. He already has 34 assists and certainly will exceed the 50 assists he registered last year at his current pace. Here are three examples this week of the excellent vision and passing execution that Petrov has displayed.
This type of vision will inevitably help his own scoring ability because defenders will need to respect his passing ability more which should open up more time and space for his shot.
Now I would likely have not led with Petrov this week, despite his excellent offensive performance. However, there was one aspect of his game this week that really made me take notice. Petrov was not on for one goal against this week in any situation. I am highlighting this aspect because assuredly, Petrov’s path to the NHL will require his defensive play and effort level off the puck to continue to improve. Look at this little example. Petrov loses the puck at the offensive blue line. He hustles to make sure he back on defense to stop any transition attacks. Then creates a transition by pressuring the puck carrier at his blue line. Ultimately, he draws a penalty with his hard work and puts North Bay in a great position to tie the game.
Here is another little play that will go unnoticed a lot by fans. The Battalion lose possession inside the opposition zone. Petrov immediately gets on the forecheck and ultimately forces a dump out that leads to a possession change for the Battalion. It is a small play, but one that will be key to his continued development. His willingness to improve his work ethic off the puck will absolutely assist his development.
Matvey Petrov’s development is arrows up at the moment. Continuing to play as he did this week will certainly enhance these positive arrows.

As I alluded to at the outset, the Bakersfield Condors coaching staff came out of the Christmas break with a fresh set-up of its roster. One of the most important changes was putting the line of Raphael Lavoie, Brad Malone and Carter Savoie together. For five periods, until Savoie was injured, this line was excellent. A big part of the reason for this success was Lavoie himself. In terms of Oiler prospects with the Condors, I thought Lavoie had the best week. He had a goal and assist in three games and contributed eleven shots on net. The goal was a typical Lavoie goal and one that highlights one of his most exciting skills.
The assist he had this week was a beauty on the powerplay to Carter Savoie.
While Lavoie only had the two points, he was all around it this week. Here are a couple more examples of his offensive flair.
So what was the key this week to Lavoie’s success? When I watch Lavoie, his success comes from a very basic command we have all heard since we were eight years old “move your feet.” When Lavoie does that, defenders have a lot of trouble because his size and reach are tough to defend. Look at this clip as an example. I apologize for the partial obstruction but watch Lavoie beat two defenders to win the puck and then drive to the net with relative ease. He then carries on and wins the puck again for the Condors.
Again, here is another example. Lavoie works back hard through the center ice on a turnover. He then makes a tremendous read on the play, turns the puck over and creates a chance at the other end. He probably scores if he gets the puck back on the attack.
This may surprise some people who know Lavoie, but I really do see a middle-six forward who could be a strong defensive presence because of his size, reach, stick skills and above-average skating ability. If he is willing to work off the puck like he did this week, he absolutely could play NHL games. Here is hoping this week is just the start of many good games ahead.

Without a doubt, Carter Savoie would have led the prospect report had he not been injured. In five periods after Christmas, Savoie had a goal and an assist. More so, he was everything that people envisioned when he was drafted by the Oilers. First, we all saw that NHL class release.
We also saw a lot of creativity from him this week on the majority of his shifts.
Savoie was also moved to 1PP this week by the coaching staff and was used as the entry option on the bump back. He did it with great success.
So what changed this week? Maybe his confidence got a boost playing on a skill line and getting 1PP minutes? Whatever happened, Carter Savoie was engaged this week. This clip below is my favourite from his week. Watch how willing Savoie is to pay the price on the entry and then gets hard on the forecheck to create a turnover.
Now, the tough part of the week was the injury. There has been no report on the severity of the injury that I have seen. However, it appeared to occur on this play when he was hit moving up the ice with the puck.
Hopefully, Savoie will be back this week when the Condors return on January 4th because this was his best week as a professional in what has been a really trying year for him.

I really don’t understand why Michael Kesselring doesn’t get more love in the Edmonton media marketplace. He’s a 6’5″, 220 lb. right-shot defenseman who is having a breakout season. Kesselring has tied his point total (13) from last season in 26 fewer games. He is first amongst AHL defencemen in goals with 10 and in shots with 101. By the way, his 101 shots are fourth in the entire AHL. Yet, I hear very little mentioned about him.
So what did he do this week? He had two goals in three games and had 11 more shots. Now if you think Kesselring’s offense is a fluke, watch the two goals this week. Here is the first one. Watch the read he makes off the puck. He sees a transition opportunity and gives Noah Philp a great target for an exit. After that, the big man just rolls with it.
On the second goal, watch him line up the rebound shot and pick his spot. Kesselring’s offensive instincts are real.
Kesselring also continues to show his creativity off the scoresheet. Watch this little pass to create a zone exit. If you think it is a fluke, watch the play again and watch his head swivel before he arrives at the puck and then again when he gets possession. For my money, he is the best passing defenceman that the Condors have on the roster.
Whether Kesselring gets NHL games with the Oilers or is part of the consideration in a trade down the road, for certain the big man’s development has far exceeded his draft slot.
Before I sign off this week. I wanted to take the opportunity to thank everyone who reads my work. Your comments have made me better at this little hobby of mine and for that I am grateful. To Zach Laing and Oilersnation thank you very much for taking a chance on me and making me look a whole lot better than I actually am.
To everyone, may 2023 bring health and happiness to you and yours. Happy New Year.
Editorials
Featured
Recent articles from Bruce Curlock