The Sked Ahead: December is another busy month for the Oilers, but weaker opponents means higher expectations 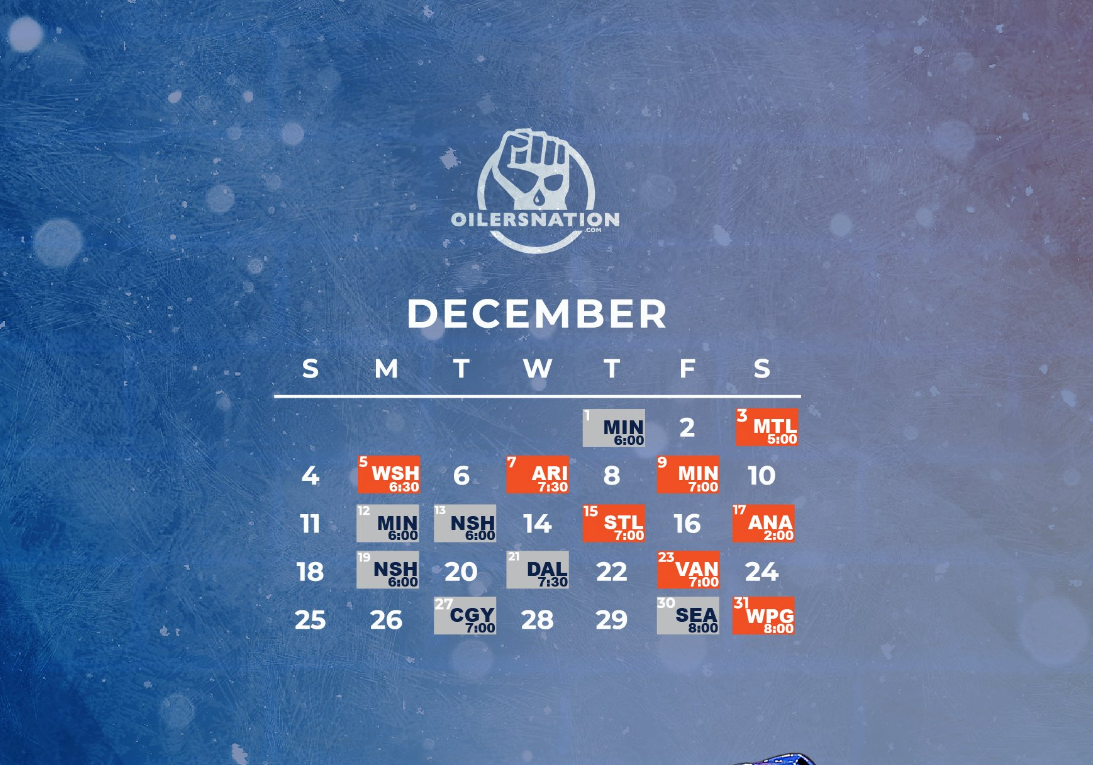 By Cam Lewis
2 months ago
Welcome to December!
Everybody around these parts is happy to see the month of November in the rearview mirror. The Oilers struggled through a stretch loaded with a taxing travel schedule and tough opponents but a three-game winning streak helped the month from becoming a disaster.
All told, they went 7-5-2 in November, matching the win total I was hoping for when I looked at the schedule last month. It was far from pretty, but that result has the Oilers in a playoff spot at the start of December with their most difficult stretch behind them.
December will again be a busy month for the Oilers, as they’re scheduled to play 15 games in 31 nights, but a good chunk of their opponents are teams who are currently behind them in the standings.
The month kicked off with a scheduled loss in Minnesota, as the Oilers were playing their third game in four nights and the Wild took them down by a score of 5-3. They’ll now head back to Edmonton for a much-needed stretch of home games, as the Oilers will host the Canadiens, Capitals, Coyotes, and Wild over the next week.
All four of those teams are behind the Oilers in the standings at the time of writing. The Capitals beat the Oilers in Washington and the Wild beat them in Minnesota, but this is our first look at the Habs and Coyotes this season.
After that, the Oilers will hit the road to play back-to-back games in Minnesota and Nashville. Unlike the back-to-back in Chicago and Minnesota we just watched, the Oilers will have a couple of days off on Saturday and Sunday before hitting the road.
Games against teams like the Wild and Predators are important because these are teams the Oilers could be competing with for a wild-card spot later in the season. They’re both currently two points behind the Oilers with two games in hand each.
The Oilers will then return home for a pair of games against two more teams behind them in the standings.
The Blues have had an eight-game winning streak and a seven-game losing streak and currently sit with an 11-12-0 record. Back in October, the Oilers lost to the Blues by a score of 2-0 at home and beat them by a score of 3-1 on the road.
The Ducks, as expected, are in the league’s basement with a 6-16-2 record. This will be Edmonton’s first meeting with Anaheim this season.
Edmonton will again hit the road for a pair of mid-week games against Central Division teams, but this time it isn’t a back-to-back. It’ll start off with another game against the Predators in Nashville and conclude with a game in Dallas against the Stars.
The Stars have been the class of the Central thus far. They’re 14-6-4 and have scored more goals than any team in the league. Dallas pounded the Oilers by a score of 6-2 in Edmonton early in November.
After the game in Dallas, the Oilers will return to Edmonton for a game against the Canucks before heading into the Christmas break. It’ll be Edmonton’s first meeting with Vancouver since their season-opening win.
It’ll be interesting to see if the Canucks have a different coach by then. There’s been plenty of talk that Bruce Boudreau is going to get fired but it hasn’t happened yet.
The Oilers will come out of the break with a game in Calgary against the Flames. It’ll be the final Battle of Alberta in the regular season. The two teams have split the head-to-head thus far, with both teams picking up wins on the road.
They’ll then have a couple of days off before playing a difficult back-to-back to end the month. The first game will be in Seattle against the Kraken and then the second game will be in Edmonton against the Jets.
This will be the Oilers’ first look at the surprisingly-good Kraken, the biggest surprise in the Western Conference thus far. Seattle has a 15-5-3 record through October and November, only two points behind the Conference-leading Golden Knights with two games in hand. Is this a breakout season or just a hot start? We’ll have a better idea come late December.
It’s another busy month for the Oilers but this isn’t the same challenge that November posed. There aren’t any trips to the Eastern Conference so the travel is less demanding and the opponents that the Oilers are facing aren’t as daunting.
There are a lot of four-point games up for grabs in December with teams who will be battling for playoff spots in the Western Conference down the stretch so this would be an excellent time for the Oilers to go on a bit of a heater.
Struggling through November was reasonable, but if the Oilers are going to separate themselves from the middle of the pack, winning 10 of 15 games in December should be the goal.
Featured
Oilers Talk
Recent articles from Cam Lewis