To what extent is 5v5 offence an area of improvement for the Edmonton Oilers? 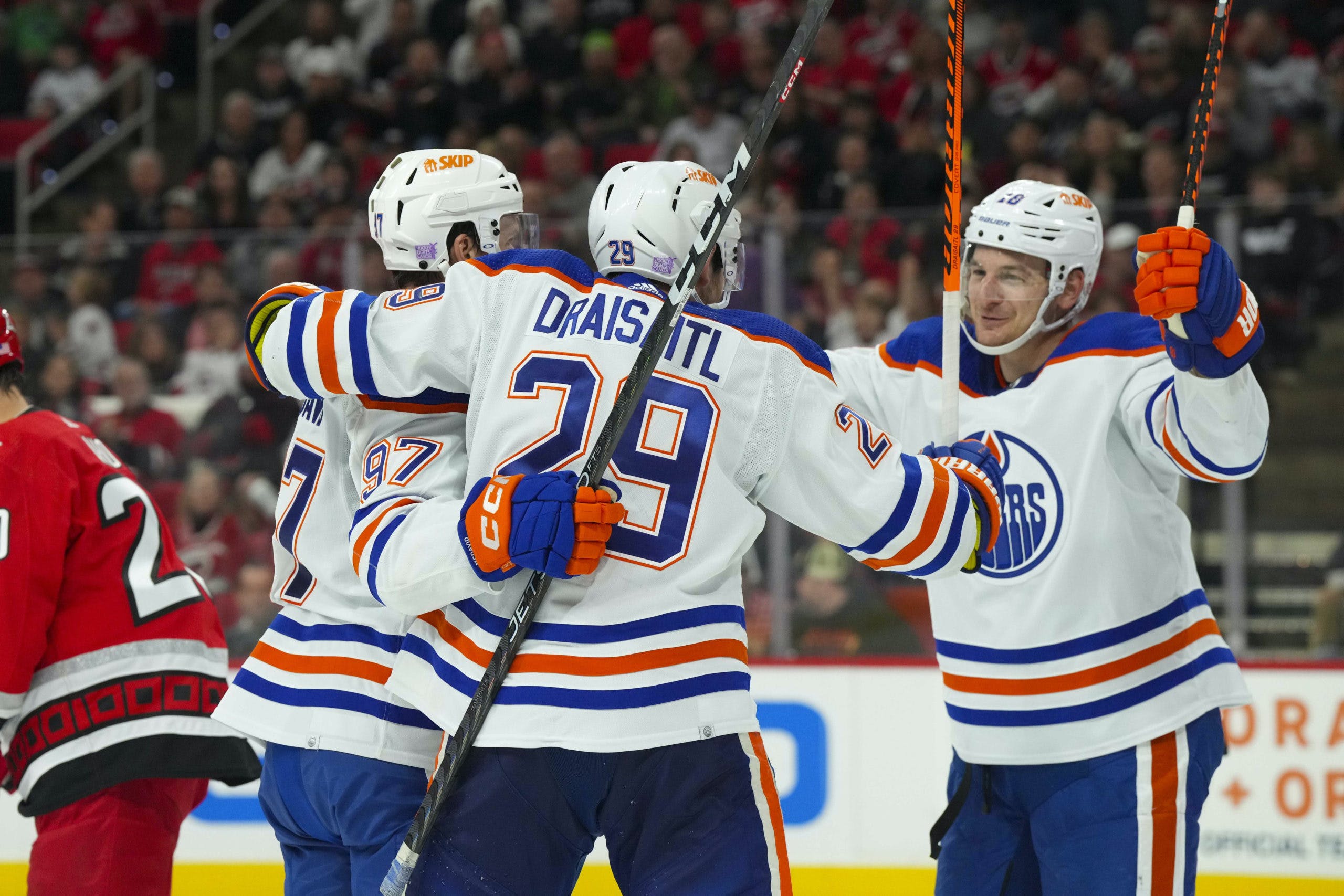 By NHL_Sid
2 months ago
With over twenty percent of the season complete, more things have gone right than wrong for the 10-8 Edmonton Oilers. They’re currently coming off a 4-3 win against the Vegas Golden Knights, a pivotal divisional game. However, as they rank 4th in the Pacific Division, this team could undoubtedly improve in several areas.
Probably the most obvious area of concern is their overall defensive play. I wrote in-depth about this issue last week, but only four teams in the NHL have allowed scoring chances against at a higher rate.
There’s lots of blame to go around with Edmonton’s struggles to consistently keep the puck out of their net. The top pair of Nurse and Ceci have struggled to defend the rush, Campbell has been awful, Kulak hasn’t performed up to his standards, and the second line has bled goals and chances against.
However, as I dive deeper into the team, I’m not entirely sure if defensive play is the sole area of improvement for this Oilers team. There’s some troubling trends in their offensive results at even-strength, and it’s an issue that should be fixed if they wish to contend.

In this article, I’ll outline several reasons why this team could potentially benefit from added offensive talent alongside McDavid and Draisaitl, most notably at 5v5.
*All stats via EvolvingHockey and Natural Stat Trick unless stated otherwise

Edmonton is deadly on the PP, but they haven’t been spectacular at generating 5v5 offence

As usual, the bright spot of Edmonton’s season thus far is their power play. The team has scored 12.8 PP goals per hour, an improvement of 31% (!) from last season when they scored 9.8 PP goals per hour. Alongside McDavid and Draisaitl’s production, of course, the power-play has arguably been the driving force behind their victories thus far.
However, can the same be said for their 5v5 offence? 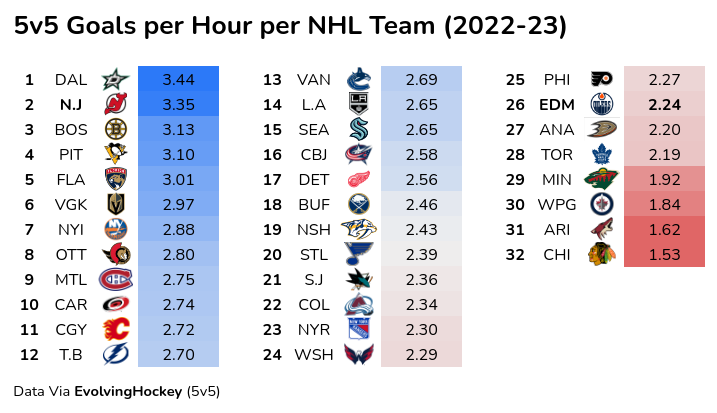 At 5v5, the Oilers have scored 2.24 goals per hour, ranking 26th in the league. Among Pacific Divison teams, they actually rank second last in 5v5 goals per hour, only ahead of the last-place Anaheim Ducks. Of course, Evander Kane’s injury has played a role, but even prior to his injury, the team ranked 20th in 5v5 GF/60. Put differently, Edmonton hasn’t met their 5v5 offensive expectations this season with and without Kane.
Still, you can certainly argue that it’s early in the season, and in a eighteen-game sample, puck luck can be rampant. Shooting percentage is an exceedingly valuable tool in smaller samples and cannot be ignored; the Oilers are at 7.7 SH%, ranking 24th in the league. It’s safe to say that they should bounce back from this.
However, their SH% last season was 8.4%. Under Woodcroft, they were at an 8.8 SH%.
Hypothetically, if their shooting percentage this season placed exactly at last season’s 8.4%, Edmonton would have scored roughly 2.43 5v5 goals per hour, ranking 19th in the league. If they placed at their SH% under Woodcroft, the team would have scored 2.55 goals per hour, ranking 17th.
Is 19th or 17th place in 5v5 goals created an acceptable bar for a roster that contains Connor McDavid and Leon Draisaitl, who’ve combined for 64 points in 18 games? In my opinion, definitely not.
Furthermore, what’s the primary reason for their lower SH% this season? Can it be simply played down to poor luck, or is it something else?

Let’s talk about the seemingly never-ending concern with finishing

In the past two seasons combined, Edmonton ranks 25th in Goals Scored Above Expected, a statistic commonly used to measure finishing talent. They don’t possess a lot of players who’ve scored above expected in the past three seasons.
Largely due to McDavid and Draisaitl, the Oilers are very good at creating scoring chances, but finishing them? Not so much.
This season, the bottom-six has scored 7 goals on 12.7 expected goals. This hasn’t been an isolated issue for just this season; in the prior three seasons, they’ve scored 131 goals on 155 expected goals in 4695 TOI; consistently scoring less than expected in a significant sample size indicates lack of skill and finishing, as opposed to plain and simple bad luck.
In general, the team lacks strong finishers. This has been an issue that I’ve mentioned several times in the past.
For those who’ve been reading my pieces for a while, you’ll know that I’m a very vocal advocate of Puljujarvi. However, as much as I hate to admit it, it’s undeniable that he’s struggled offensively this season. Despite spending a solid amount of time with McDavid, he has just one goal and three points in 18 games. Even his underlying numbers have looked mediocre; per EvolvingHockey, Puljujarvi’s impact on generating on-ice expected goals ranks dead last among Edmonton forwards. On the bright side, Puljujarvi’s defensive metrics continue to look good, but he’s performing poorly at generating offensive scoring chances and even worse at finishing those chances.
Yamamoto has obviously struggled as well, with just 3 assists in 13 games, a production pace inferior to his rookie season five years ago in 2017-18. He has yet to score a goal in spite of playing the vast majority of his time alongside Leon Draisaitl.
Ryan McLeod is still an excellent defensive forward, but he’s subpar offensively. He’s strong in transition and entering the zone, but generating high-quality chances is his most significant weakness.
Warren Foegele has three goals in his last five games, but will it last? Prior to this stretch, he was just as poor a finisher as Puljujarvi.
Kostin and Janmark have shown flashes in the games they’ve played with Edmonton thus far, and they’re serviceable bottom-six assets, but aside from Janmark’s 19-goal season five years ago, neither of them has shown indications of strong finishing talent. Ryan and Shore have been negative finishers as well.
Consequently, perhaps offensive depth, notably in regard to finishing talent, is an area that Edmonton could seek improvement in. Considering that their finishing struggles date back to last season, I don’t think their low SH% is entirely a product of poor luck.

To further expand on Edmonton’s depth scoring, here is a look at the top-five teams in the NHL this season in comparison to the Oilers, and how many 5v5 goals they’ve scored per hour without their top two producers.

Evidently, that is a significant difference.
Boston has had phenomenal depth scoring, while Dallas, New Jersey, Vegas, and Dallas have obtained very good scoring without their top producers as well. But Edmonton? Their bottom six has produced less than half of the bottom six of other top teams.
To put into perspective just how poor 1.2 GF/60 is; the team that currently sits in last place is the Anaheim Ducks. Their top two 5v5 producers are Troy Terry and Trevor Zegras. With Terry and Zegras off-ice, the Ducks have scored 1.5 goals per hour, superior to Edmonton’s GF/60 without McDavid and Draisaitl.
Depth scoring was an issue that was briefly fixed under Woodcroft last season, largely due to Derek Ryan’s strong performance, but only four players on the 2022-23 roster have a 5v5 Points/60 above league-average. Considering that this concern has occurred under two coaches, it’s reasonable to say that this is a roster construction issue.
Even with mediocre finishers, the team doesn’t have a ton of issues with scoring goals with McDavid and Draisaitl on-ice, but without them, they aren’t close to proficient as other contenders.

With all of this in mind, the Oilers still have a strong offensive core on paper without a doubt.
Edmonton possesses the two best offensive players in the league in McDavid and Draisaitl. RNH, Kane, and Hyman are strong offensive assets as well.
Puljujarvi is a career-low PDO, and eventually, he will begin producing a bit more. Simply put, a 3.6 on-ice shooting percentage will not sustain.
Out of all available microstats, controlled zone entries have performed the best at predicting future offence; McLeod has ranked 3rd on the roster in controlled entries/60 last season and this season. There is a possibility he could break out offensively with the right linemates.
Yamamoto should start producing eventually as well once he returns from injury (he won’t have 0 goals for the entire year), and Holloway has legitimate potential. Foegele, Kostin, and Janmark are also respectable bottom-six pieces.
However, due to the reasons mentioned above, I believe they still require some improvement in this area, most notably when it comes to finishing. There’s an overall lack of natural finishers on the roster. Of course, it’s undeniable that they need some defensive help as well to balance the roster, but ranking 26th in the league in 5v5 goals scored per hour with the NHL’s two best offensive players is a cause for concern.
Depth scoring remains an area that the Oilers lack in, especially compared to other top teams in the league. This should be something to keep in mind at the trade deadline.
Find me on Twitter (@NHL_Sid)
Editorials
Featured
Oilers Talk
Recent articles from NHL_Sid