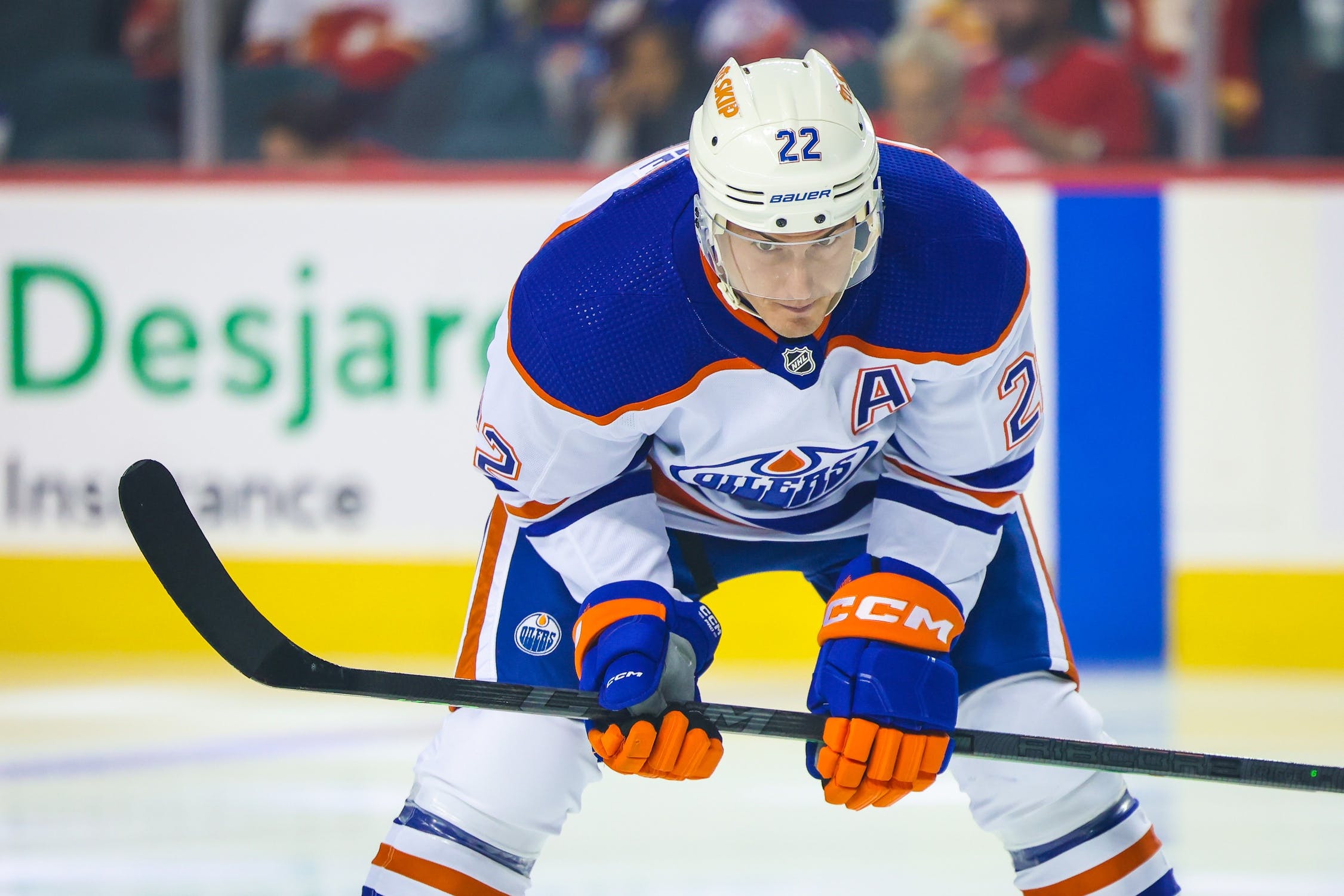 By Jason Gregor
28 days ago
“You are never too old to learn more than you already know and to become able to do more than you already can.” — Isaac Asimov
The words reflect well for Tyson Barrie, who in his 11th full NHL season is being used on the penalty kill more than ever before.
In 32 games as a rookie in 2012/2013, Barrie played 32 games and averaged 1:11/game on the penalty kill. Over the next nine and a half seasons the most he played on the PK was :33/game in 2017. But Dave Manson and Jay Woodcroft changed that.

In 38 games last season they used Barrie :45/game, and this season he’s played 1:14/game on the PK. He’s only been on the ice for one goal against thus far. He isn’t one of the main penalty killers —Cody Ceci (22 minutes), Darnell Nurse (18) and Brett Kulak (14) are the main guys ahead of Barrie (7:22 in total PK time on ice) — but even being used every game on the PK is very different for Barrie. And exciting.
“It’s (penalty killing) something that I haven’t really done over my career, but I feel like I’m capable of it, and they’re working with me,” said Barrie.
He knows he won’t be a mainstay on the PK. His best attribute is producing offence. He’s an elite point-producing defender.
Since entering the NHL in 2012/2013 Barrie has the seventh most points among defenders with 438 in 679 games. Over the past five seasons he’s produced the seventh most points as well with 247 in 351 games. Over the past two seasons, he was 10th. For over a decade he has been a top-10 scoring defenceman in the NHL. He plays to his strengths, but he’s really respected and enjoyed Woodcroft and Manson’s approach to coaching.
“It’s a new challenge, and 12 years into my career it’s kind of invigorating and refreshing. It has given me a boost,” said Barrie.
Woodcroft explained why he and Manson opted to use Barrie on the PK despite him never playing there for the majority of his career.
“Dave and I hold the belief that all of our D-men should be able to penalty kill — all of them,” said Woodcroft. “That is something we started in Bakersfield. Of course, you might have certain pairs start kills, but I think how smart Tyson is makes him a good penalty killer. He anticipates well and knows where pucks are going, and that is all part of our effort to ensure we are using all our D-men on the kill.”
Barrie has been on the offensive side of the power play for years, and he feels knowing how the offensive players think can help him on the penalty kill.
“As a power play guy, you know where your outs are and you know what you are trying to accomplish on the power play,” said Barrie. “There’s not that many different looks on the power play, so you can kind of anticipate different things and release points that guys are maybe looking for and you don’t really want to say cheat, but you kind of anticipate a little bit and maybe get your stick in there.”
Barrie has been on the ice for only one goal against on the PK so far. His 8.14 GA/60 is lowest among the seven D-men. Granted it is only six games and a very small sample size. His PK time is inflated due to the Vancouver game where the Oilers took way too many penalties, and he was on for over three minutes of PK time. He and Evan Bouchard have split the second pair RD spot on the PK, and with seven D-men dressed for the past four games the overall PK time, outside of Ceci and Nurse, has been split between the other five defenders.
When the Oilers have 12 healthy forwards, Barrie likely will see a bit more time on the PK like he did in the first three games of the season. It is still a learning process for the veteran, but having played on the PK last year, in the regular season and some in the playoffs, he is feeling more comfortable. He’s even learning the brutal side of the penalty kill — blocking shots.
“You try not to put yourself in the position where you have to soak the big one timer, but if you have to do it, then you’ve got to do it,” he smiled. 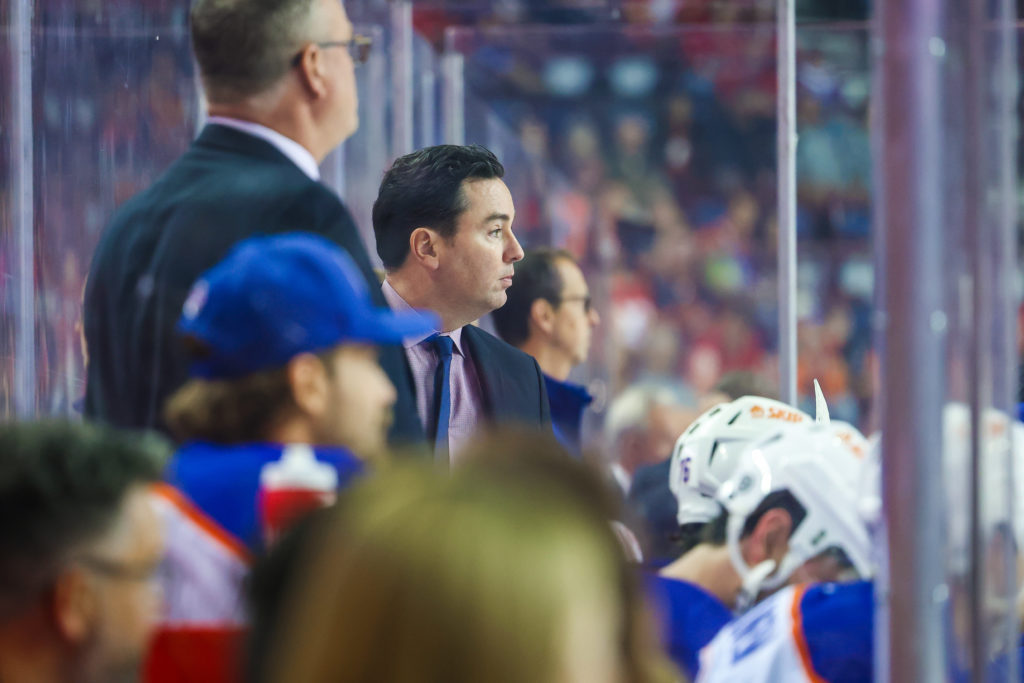 Sep 28, 2022; Calgary, Alberta, CAN; Edmonton Oilers head coach Jay Woodcroft on his bench against the Calgary Flames during the first period at Scotiabank Saddledome. Mandatory Credit: Sergei Belski-USA TODAY Sports
While Barrie has only been on for one power play goal against, the Oilers’ penalty kill is off to a slow start. They’ve allowed one goal in all six of their games. The first thing they need to improve is their discipline. The Oilers are averaging 4.5 time shorthanded/game. That is the fourth highest in the NHL. Not being on the PK as often will increase their chances of not getting scored on.
But penalties are inevitable, and the Oilers need to be more cohesive as a group. They’ve allowed 44 shots on goal thus far, fifth most in the NHL, and their SA/60 is also fifth highest, so it isn’t just because they’ve be on the PK more that they are allowing more shots. One reason is because they are getting killed on faceoffs.
Ryan Nugent-Hopkins has won four of 16. Derek Ryan has won 1 of 5 and Ryan McLeod is 0-for-4. Those three have combined to win five of 25 faceoffs, and they are the three of the top-four PK forwards in time on ice: RNH (14:37), Zach Hyman (13:31), McLeod (11:49), Ryan (8:04). Draisaitl has played 7:25 on the PK, and he’s that high because he can win draws while the other three have struggled.
Draisaitl is 14-8 (63.6%) on the penalty kill. Very impressive considering the power play centre gets to take the draw on his best side. Draisaitl is 14-8, while the other three Oilers are 5-20. PK faceoffs aren’t solely on the centre, but it is safe to say RNH, Ryan and McLeod can improve in the dot. If they can be around 45% on the PK that is good. Among the 33 players who have taken 15+ faceoffs on the PK, only nine of them are above 50% efficiency. I don’t expect RNH/McLeod/Ryan to be over 50%, but sitting at 25% collectively isn’t good enough.
Winning a few more draws will help, but the Oilers need to limit the cross-seam passes. They’ve allowed too many of those. The PK is a work in progress and taking fewer penalties, winning a few more faceoffs and limiting the cross-seam passes are the three things I’d focus on the most.
Editorials
Featured
Oilers Talk
Recent articles from Jason Gregor