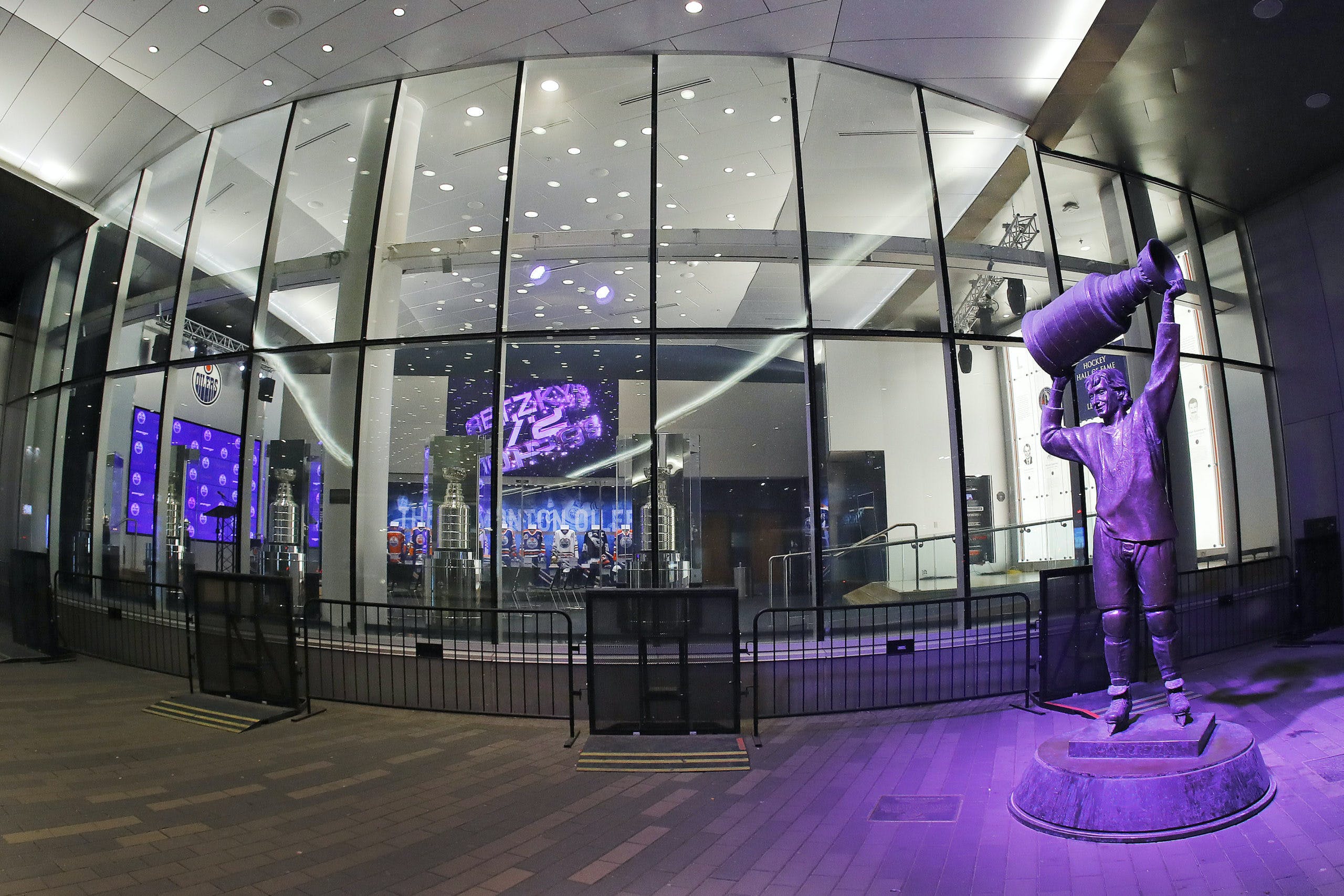 By Jason Gregor
1 year ago
The NHL regular season begins Tuesday, October 12th, with two games, followed by five on the 13th, nine games on the 14th, three on the 15th and 14 on Saturday the 16th which include Boston, Calgary, San Jose and St.Louis finally playing their first games of the season.
But all the teams are still uncertain how their rosters will potentially be impacted by travel restrictions for unvaccinated players.
Earlier this month the NHL and NHLPA announced new COVID protocols for the upcoming season. The biggest change was the ability for teams to suspend unvaccinated players who are “unable to participate in club activities.” Those players would forfeit the equivalent of one day’s pay for each day they are precluded from participating.
If an unvaccinated player tests positive and has to be quarantined away from the team, he will miss pay for the entirety of his quarantine. And on top of that, situations where a player cannot travel because of local, provincial (state) and/or federal regulations upon returning home will also be suspendable situations.
The tricky part about the latter is that the NHL is still uncertain what those guidelines will be. In August the Canadian Federal government announced, “As soon as possible in the fall and no later than the end of October, the Government of Canada will require employees in the federally regulated air, rail, and marine transportation sectors to be vaccinated. The vaccination requirement will also extend to certain travellers. This includes all commercial air travellers, passengers on interprovincial trains, and passengers on large marine vessels with overnight accommodations, such as cruise ships.”
The above release was vague when it said “certain travellers.” And considering Canada goes to the polls next Monday, there is a chance the current government will not be in power, so who knows what the rules the new government will implement. The NHL could find out as soon as September 21st, as many Canadians will want to know what the plan is for October and how it will impact their travel, and that also includes travel for NHL teams.
I spoke with a person in a high ranking NHL management position and they said they currently don’t know how the potential restrictions could impact their team. “Currently we have a few players unvaccinated, and we don’t know how many games they might be forced to miss due to travel restrictions,” he said. “The Canadian border is an issue, but certain states in the United States have their own regulations as well. Ideally all the players will get vaccinated, and then it won’t be an issue, but I am skeptical that will happen. If you have to be fully vaccinated to travel into Canada, that could impact between eight percent to 30% of a team’s games depending which division they are in.”
And for Canadian teams, if a player is unvaccinated and flies to the US for a game, how long will they have to quarantine upon return? No one has that answer yet, but even if it is only three days, that will mean they miss games every time they return home. It would have major impacts to their wallets, but also to their teammates. 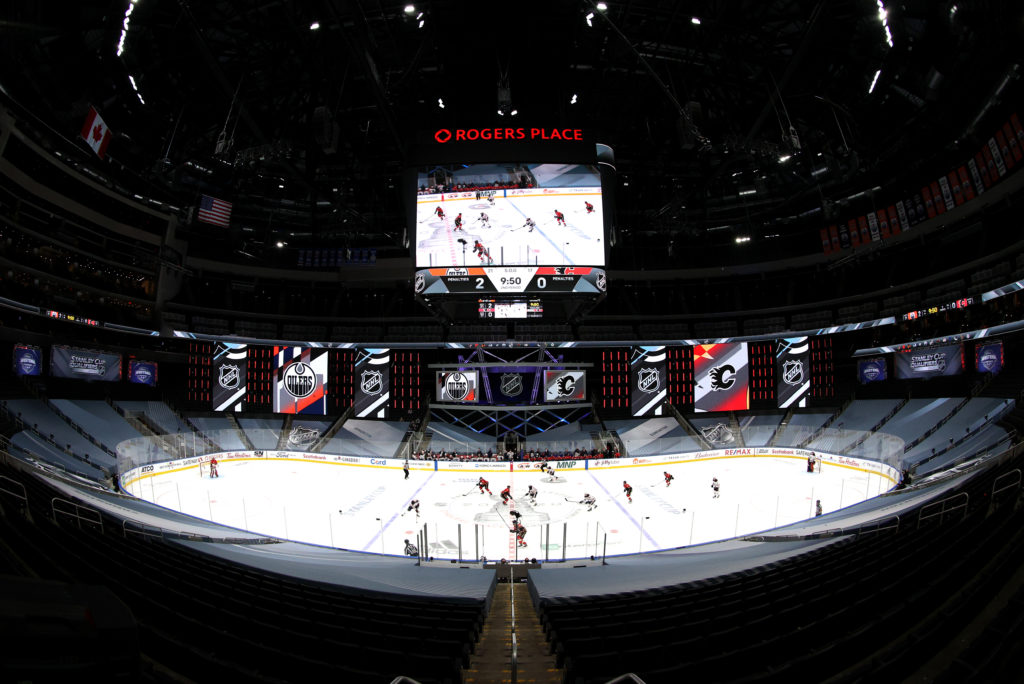 July 28, 2020; Edmonton, Alberta, CANADA; A general view of game action during the second period of the exhibition game between the Edmonton Oilers and the Calgary Flames prior to the 2020 NHL Stanley Cup Playoffs at Rogers Place on July 28, 2020 in Edmonton, Alberta. Mandatory Credit: Dave Sandford/NHLI via USA TODAY Sports
Last week, two different NHL sources told me around 50-80 players were unvaccinated, which would mean on average two players per team. However, that number could have dropped as players arrived to their team and had discussions with teammates and management. Some teams are fully vaccinated, like the Calgary Flames and Carolina Hurricanes, so it will be interesting to see which teams might be impacted the most with unvaccinated players. Having two players suddenly unavailable for a three-five game road trip is a big issue and leads to many questions. I also wonder if more teams will announce “100% vaccinated” on their social media feeds like the Hurricanes did?
Will we see some smaller version of a Taxi-squad? It has been discussed.
Will suspended players count on the 23-man roster?
Will teams opt to have unvaccinated players off the roster, or toll their contract (roll it over to the next season)?
Another NHL executive put it bluntly when I asked about the challenges of having an unvaccinated player on the roster this season: “It will be difficult to run a team if a player is unavailable for select games.”
It is well within a player’s rights not to get vaccinated, but those who opt not to will be very limited in what they can do. On the road, all non-vaccinated players must stay in their hotel room. They can’t go to dinner with teammates or have family members visit them. Add on to that that many provinces in Canada already have a passport vaccine, unvaccinated players (who aren’t granted an exemption for medical purposes) who play in Winnipeg, Vancouver, Toronto, Ottawa and Montreal can’t go out for dinner, to a movie or any other non-essential businesses. Those provinces already have a proof-of-vaccination in place and Ontario’s begins on September 22nd.
For Canadian teams, their players would need to be fully vaccinated by the time they re-enter Canada.
For Montreal that is October 15th.
Winnipeg the 20th.
Edmonton the 23rd.
Vancouver the 24th.
Toronto the 28th.
Ottawa the 30th.
Most players have arrived to their home cities by now and will be participating in “Captain skates” with their team. These skates are informal and without coaches, but teams will know who is vaccinated and who isn’t by now. And the next month will be crucial in sorting out how unvaccinated players will be listed if they are unable to play due to provincial/state rules.
We’ve seen a few NHL assistant coaches step down (San Jose assistant Rocky Thompson, medical exemption) or be fired (Sylvain Lefebvre as he opted not to get vaccinated) and I’m curious to see how teams will handle unvaccinated players. It is worth monitoring.