What should the Edmonton Oilers do with Tyson Barrie? 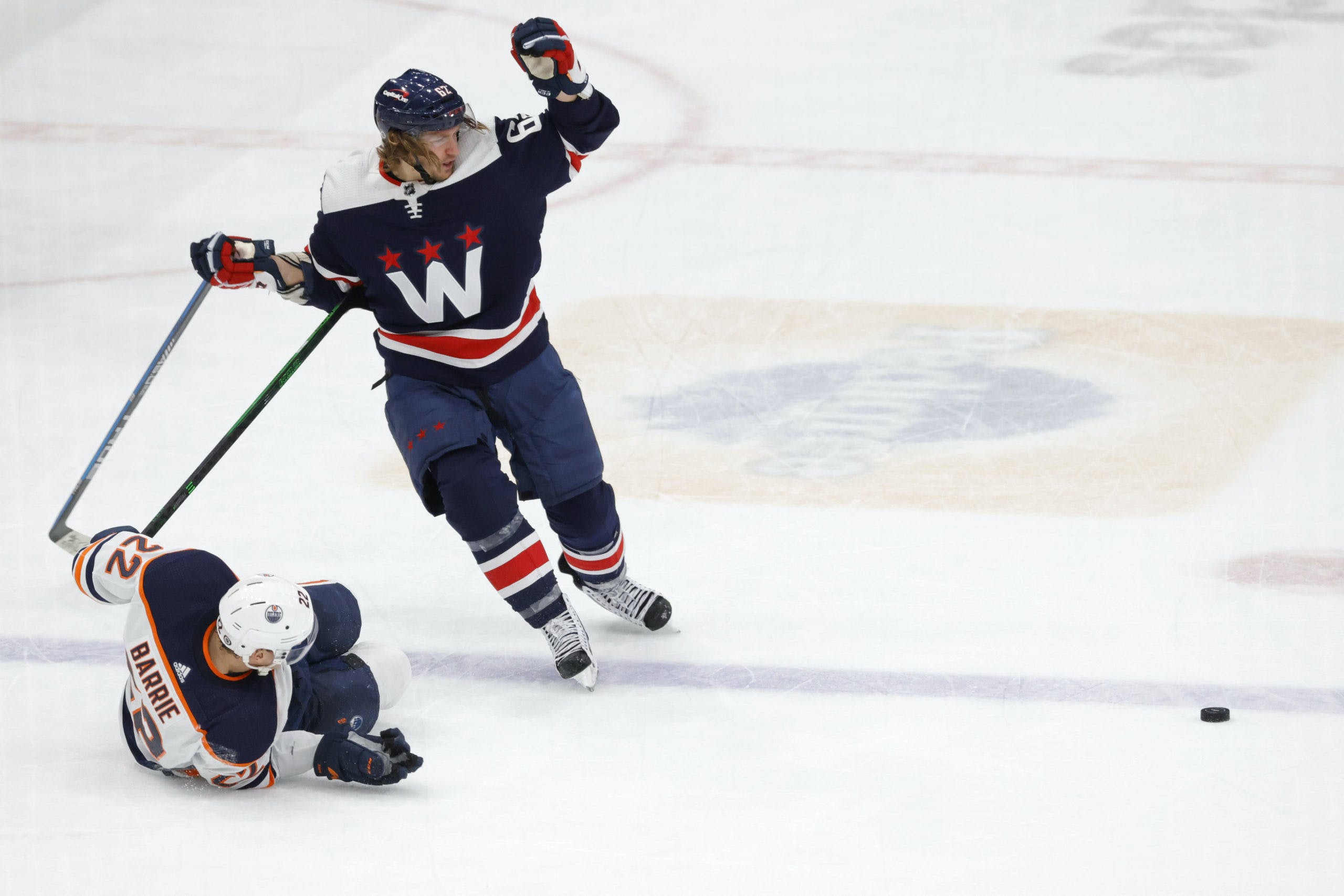 By Zach Laing
9 months ago
Tyson Barrie is fighting it.
His 2021-22 campaign has been far from what anyone imagined and on Wednesday night, it was put on full display. While his underlying numbers for the game were slightly above average a massive gaffe almost cost Edmonton the game.
With under five minutes to go, Barrie was unable to take a pass inside the offensive blue line, and immediately, Caps forward Carl Hagelin had the jump on him. Barrie had no other choice but to haul down Hagelin sending the Oilers to a penalty kill in a tie game.
Thankfully, Zach Hyman and Ryan Nugent-Hopkins made the most of it scoring what would be the game-winning goal, but we can’t let that overshadow the brutal play by Barrie. In a microcosm, it’s a small play over the course of an 82-game season, but for Barrie, these instances are happening now more than ever.
Barrie joined the Oilers on a one-year, prove-it deal ahead of the 2020-21 campaign and his addition to the team was moderately positive. His 48 points in 56 games were the most in the league and on a per-game basis, the highest of his career. His secondary assist rate was a big driver of this.
Despite this, he proved to have a negative drag on those around him, largely due to the fact he’s a massive defensive liability. Isolated, this was a major issue but was almost overshadowed by the offensive output that happened with him on the ice.
Nonetheless, the Oilers awarded him with a $750k raise and a three-year deal paying him an AAV of $4.5-million. Early into that deal, it’s blowing up in the club’s face.
This year, however, his defensive warts are being exploited as his offensive game just hasn’t been there. The Oilers lost Adam Larsson on the right side. He was a key player in shutting things down in the defensive zone. As solid as Cody Ceci has been, he nor Evan Bouchard are able to make up for what Larsson brought to the table.
While you can argue that Barrie can still be a solid power play quarterback for the Oilers, Bouchard’s emergence has shown he can do the same thing Barrie can with the man advantage.
Barrie started the year on the Oilers’ top pairing but it didn’t take long for him to drop down the defensive depth chart. This, too, was in part of Bouchard’s emergence.
I get the reasoning behind resigning Barrie. It was done to help isolate and take the offensive pressure off Bouchard on the backend, but the young man has shown his ability to produce.
Among all defencemen at 5×5 who have played over 560 minutes, Bouchard’s 1.33 points per hour ranks 21st in the league among 133 defencemen. Barrie’s 0.85 points per hour ranks 72nd.
On the power play, among all defencemen who have played over 40 minutes, Bouchard’s 5.78 points per hour rank him 25th among 78 players, while his 14.45 shots per hour place him sixth. Barrie’s 5.03 points per hour rank him 33rd, but his 9.5 shots per hour rank him 35th.
It’s clear that Bouchard has overtaken Barrie on the depth chart, negating the Oilers need for an offence-only rearguard on the third pair.
The Oilers’ defence needs some jam. They need some grit, and they need some bite. It’s something the club has sorely lost with Larsson departing for greener pastures in Seattle.
All in all, it makes sense for the Oilers to explore moving on from Barrie. If I were the team, I would be looking at some kind of deal surrounding Barrie for a strong right-side third-pairing defenceman who can be a Larsson-like vacuum in the defensive zone, and a mid-round pick to be added, as well.
It would allow Bouchard to continue to grow as he has as an offensive defenceman in this league. While he’s still finding his way defensively, he’s already providing better value in his own zone than Barrie.
Zach Laing is the Nation Network’s news director and senior columnist. He can be followed on Twitter at @zjlaing, or reached by email at zach@oilersnation.com.
Nation Takes
News
Oilers Talk
Recent articles from Zach Laing