Where should the Oilers deploy Ryan Nugent-Hopkins in their current lineup? 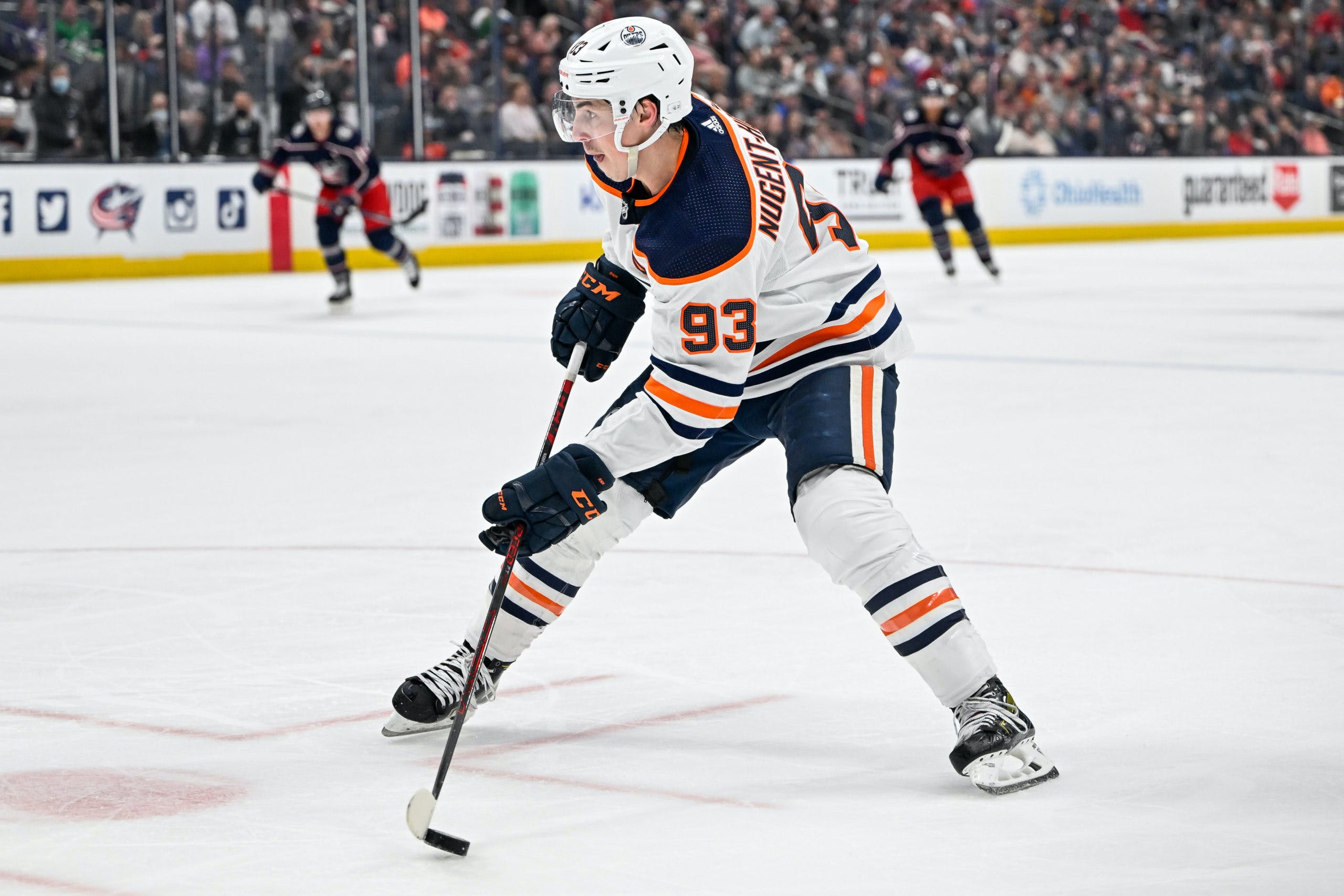 By NHL_Sid
2 months ago
As he heads into his twelfth NHL season in 2022-23, Ryan Nugent-Hopkins is Edmonton’s longest-serving player currently on the roster.
For years, he’s been an extremely versatile asset, as he plays significant minutes for the team in essentially every situation. Nugent-Hopkins is consistently deployed on Edmonton’s top power-play unit, and regularly kills penalties. In regards to his 5v5 deployment, he’s constantly played up and down the lineup over the years.
In 2016-17, Nugent-Hopkins primarily played as Edmonton’s second-line center, and consistently played against difficult matchups. He continued to be deployed at center for the first two-thirds of 2017-18, but found success at 1LW, playing on a line with Connor McDavid and Ty Rattie near the end of the season.
That trio had a strong preseason in 2018-19, but they declined as the regular season wore on. Nugent-Hopkins would often rotate between playing as 2C and 1LW for the remainder of that year.
In 2019-20, he played 2C for the first few months of 2019-20, but after an abysmal stretch for the team in December, coach Dave Tippett deployed the “DRY” line, consisting of RNH, Leon Draisaitl, and Kailer Yamamoto. That trio was phenomenal in the second half of that season.
In the past two seasons, Nugent-Hopkins hasn’t really locked in a role. He’s played a considerable amount of minutes at 1LW, 2LW, 2C, and 3C.
This brings us to the major question; considering that we have a significant sample size of when he’s played both center and wing, where should Nugent-Hopkins preferably be deployed this upcoming season?
*All data via Natural Stat Trick and EvolvingHockey unless stated otherwise

RNH’s line and teammate results in the past two seasons 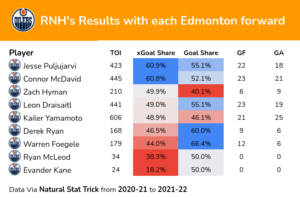 Nugent-Hopkins produced his best xGF% results on a line with McDavid and Puljujarvi, as that trio found success together in the early months of 2020-21. Despite having a low PDO, they still finished with a positive goal differential as well.
In 105 minutes, Nugent-Hopkins did well at driving play with Hyman and Yamamoto, but due to an awfully low 3.7 on-ice SH% and 0.93 PDO, the line was crushed in terms of actual goals. This won’t sustain, so this line still remains a fine option.
Under Woodcroft, Foegele – RNH – Ryan was the line that Nugent-Hopkins played the most on. They out-scored opponents 8 – 6 in 128 minutes, but they were quite mediocre in terms of scoring chances. Their PDO indicates that their GF% won’t sustain over a larger sample.
At the bottom of this list is the DRY line. In 2019-20, the line out-scored opponents at an astounding ratio of 28 – 8, and still drove possession and scoring chances at a prominent rate, with a 55% expected goal differential. That season, they were the major reason for Edmonton’s resurgence in the second half.
However, in the past two seasons, their chemistry has markedly declined. Due to a high PDO, they’ve still managed to post a decent GF%, but they’ve been abysmal in regards to driving possession and scoring chances.
With all of this data in mind, Edmonton has three major options in regard to where they could deploy Nugent-Hopkins.

Here’s a look at RNH’s results at center (aka, away from McDavid and Draisaitl):

At a raw glance, his metrics at center seem quite mediocre, but the major reason is likely substandard linemate quality. The team without Nugent-Hopkins, McDavid, and Draisaitl has been quite poor, and the bottom-six performs better with Nugent-Hopkins as opposed to without. His numbers should see an improvement with the current forward depth.
Deploying him at 3C grants Edmonton a superior chance of deploying three dangerous lines, and being a well-rounded offensive team overall. Although Nugent-Hopkins would see a decrease in total ice-time, he would possess the advantage of playing against weaker competition.
If Edmonton wants to reunite McDavid and Draisaitl at any point throughout the season, Nugent-Hopkins would play 2C. In this scenario, they could give Hyman – RNH – Yamamoto another opportunity, as they drove scoring chances and possession at an excellent rate, while Puljujarvi could be deployed on the third line to balance the team.
With all of this said, Ryan McLeod has shown flashes at 3C throughout the season and in the playoffs. Nugent-Hopkins is clearly the better offensive player, but McLeod has produced superior defensive results on the third-line, as he ranks third among Oilers forwards in goals allowed per hour, and second in expected goals allowed per hour. Furthermore, McLeod also has superior faceoff numbers (neither are exceptional at faceoffs, but RNH’s FOW% is 42%, while McLeod’s FOW% is 47%).
Nugent-Hopkins and McLeod could still play together and form an effective third line, but they’d likely rotate at the center position.

Playing Nugent-Hopkins at LW is a perfectly fine idea, considering that McLeod has the ability to fill that 3C role. As mentioned above, McLeod is already an excellent defensive bottom-six player at the young age of 22, and with the right linemates, he should progress offensively.
With that said, the DRY line has been dreadful recently, and they may not be an acceptable option.
Out of all lines in the NHL with a minimum of 300 TOI in the past two seasons, the DRY line ranks second last in xGF%. In regards to high-danger chances, they’ve been out-chanced 47 – 73, equating to a horrendous 39% high-danger chance differential.
In my opinion, there are two primary reasons for their recent struggles. The first one is that Kailer Yamamoto has been quite inconsistent. His puck retrieval and forechecking metrics have seen a notable decline from 2019-20.
Yamamoto has stretches of games where he’s an excellent offensive complimentary player, but in other games, he’s nearly unnoticeable and unimpactful (I wrote all about Yamamoto right here). Yamamoto’s constant tenacity and aggressiveness were major factors for the DRY line’s success in 2019-20.
Another reason for the trio’s decline is RNH’s individual decline in terms of shooting and scoring at 5v5.
Although he evidently scores a ton of goals, Draisaitl isn’t exactly a volume shooter at 5v5, and neither is Yamamoto. In 2019-20, the primary “triggerman” on that line was Nugent-Hopkins. He scored an impressive 1.8 5v5 goals per hour on that line and shot at a rate of 9.3 5v5 shots per hour.
To compare, Nugent-Hopkins has scored at a rate of just 0.5 5v5 goals per hour in the past two seasons, alongside 6.43 5v5 shots per hour.
Of course, a 5v5 G/60 of 1.83 was exceedingly unsustainable, but his current G/60 is only marginally higher than one-fourth (!) of what it was on the DRY line in 19-20. Not to mention, he isn’t shooting at a high rate either. Consequently, a significant reason why the DRY line struggled to generate quality chances is due to the fact that no one on that line shoots the puck at a high rate. They generate minimal rebounds or traffic in front of the net, and struggle with maintaining the puck in the offensive zone, leading to plenty of chances the other way.
If Yamamoto doesn’t improve his consistency, and if Nugent-Hopkins doesn’t shoot and score at the rates at which he previously used to, it may be a poor idea to reunite the trio.
However, Edmonton does possess the option of trying Hyman or Puljujarvi at right-wing with Nugent-Hopkins and Draisaitl. Those potential line combinations could find success, as Hyman ranks first on the team in high-danger shots per hour, while Puljujarvi has superb offensive and defensive play-driving results at 5v5.

As shown above, Nugent-Hopkins has posted his best goal and expected goal differential results with McDavid and Puljujarvi, with a 60 xGF% and 52 GF%. This could still be a viable option that Edmonton could explore, but ideally, Nugent-Hopkins isn’t the best fit for 1LW on that line.
Hyman – McDavid – Puljujarvi have a superior 64 xGF% and 56 GF%. The line of Kane – McDavid – Puljujarvi possess a worse (but still very good) xGF% of 57%, but an astounding 90 GF%, as that trio out-scored the opposition at a remarkable ratio of 10 – 1 at 5v5. Of course, a 90% goal differential is unsustainable, but McDavid and Puljujarvi benefit quite a bit from a goalscorer like Kane. Consequently, Hyman and Kane would be better options in that spot.
Furthermore, it would be a better option for Nugent-Hopkins to play in the middle-six for superior team balance. 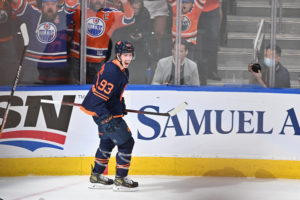 Jun 6, 2022; Edmonton, Alberta, CAN; Edmonton Oilers forward Ryan Nugent-Hopkins (93) celebrates his goal against Colorado Avalanche goaltender Pavel Francouz (39) (not pictured) during the second period in game four of the Western Conference Final of the 2022 Stanley Cup Playoffs at Rogers Place. Mandatory Credit: Walter Tychnowicz-USA TODAY Sports
Nugent-Hopkins is undoubtedly an excellent player on the power-play. With McDavid, Draisaitl, and RNH on-ice with the man advantage, the Oilers have scored at a superb rate of 12.21 goals per 60, but without Nugent-Hopkins, the team with McDavid and Draisaitl have scored 8.12 goals per 60.
Put differently, the top PP unit sees a decrease in scoring of nearly 34% with Nugent-Hopkins off-ice. There’s no question that he’s an extremely valuable special teams asset.
However, he has to improve at 5v5.
In the past two seasons, he’s only produced 1.27 5v5 points per 60, which ranks 327th out of 443 forwards with a minimum of 500 TOI. Furthermore, his isolated impact on 5v5 goal differential (RAPM GF%) ranks 15th on the Oilers, while his impact on 5v5 expected goal differential (RAPM xGF%) ranks 16th. Moving forward, this can’t continue.
On the bright side, he was a reliable 5v5 player in the playoffs. He produced at a rate of 2.5 5v5 points per hour, which is a solid 5v5 production level for a good top-six player. Additionally, he posted a 53% xGF% away from Josh Archibald.
Preferably, the most optimal place for Nugent-Hopkins to start the season is at center. With Hyman moving over to right-wing, Nugent-Hopkins will likely play 3C with one of Puljujarvi, Hyman, or Yamamoto. Alongside a quality winger, while additionally playing weaker competition, Nugent-Hopkins should be in a role to find success on the third line. In this scenario, McLeod could play 2LW with Draisaitl, or 3LW to form a dangerous third-line.
However, McLeod remains a fine option at 3C as well, allowing Nugent-Hopkins to play at left-wing in the top-six. While the DRY line may not be a great option anymore, pairing RNH and Draisaitl with one of Hyman or Puljujarvi could also be a fine idea.
There’s a variety of different options available to explore with a versatile and useful player like Nugent-Hopkins. We’ll wait and see what Jay Woodcroft will decide to do.
What are your thoughts? Should the Oilers play Nuge as a winger or as a center? Where should he play in the lineup?
Find me on Twitter (@NHL_Sid)
Nation Takes
Oilers Talk
Recent articles from NHL_Sid