Who won the blockbuster between the Calgary Flames and Florida Panthers? 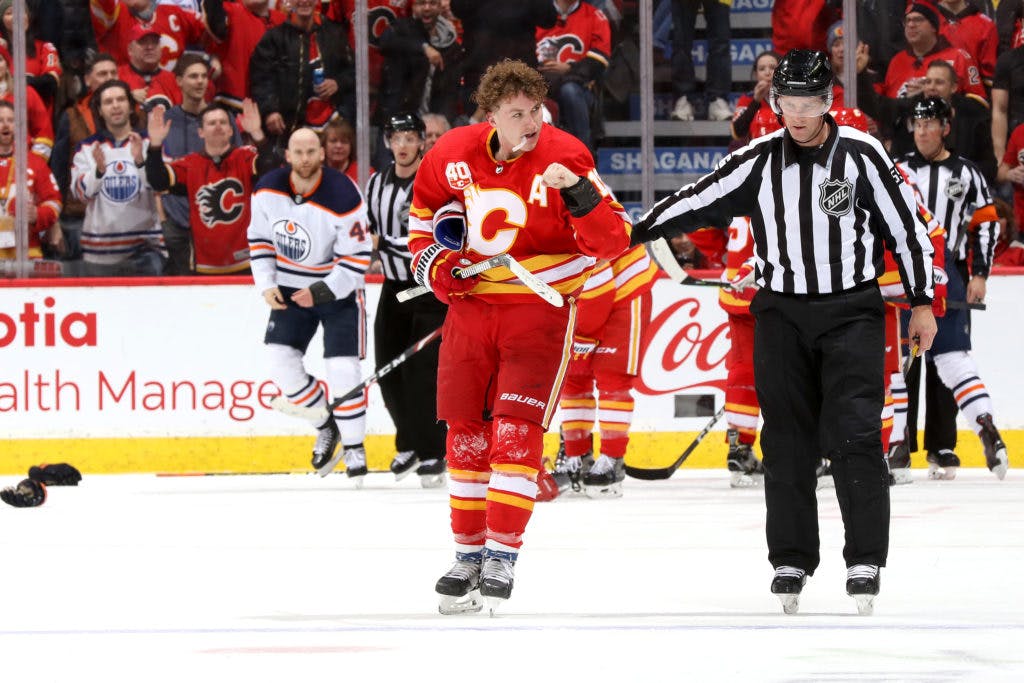 By Zach Laing
4 months ago
The truth is it’s far too soon to know.
It’s been over 12 hours now since the Calgary Flames and Florida Panthers pulled off one of the biggest trades in league history. As first reported by DailyFaceoff’s Frank Seravalli, Matthew Tkachuk got shipped to the Florida Panthers while Calgary got back, in part, pending UFA’s in Jonathan Huberdeau and MacKenzie Weegar. Tkachuk since signed an eight-year, $9.5-million AAV deal.
On paper, the deal seems like a win for Calgary. They’re replacing a 100+ point player with another 100+ point player, while picking up a top-pairing defenceman, a 1st round pick and a work-in-progress 21-year-old prospect.
Florida makes out good, too. They likely wouldn’t have been able to sign Huberdeau and/or Weegar and while it isn’t a cheap price to pay, Tkachuk will be a great fit adding some grit to their top-six.
In Calgary’s case, the question immediately becomes can they sign either, or both of them? Huberdeau is making $5.9-million this year, while Weegar accounts for $3.25-million. Heading into next offseason, Calgary is currently penciled for around $36-million. Both players could very well cost in the $9-10-million range.
The Flames could easily pencil the $10.5-million AAV over eight years they had set aside for Gaudreau to Huberdeau, and with both Milan Lucic and Sean Monahan off the books after next year, another $9-million, give or take, could easily head Weegar’s way.
There’s no denying the Flames would have the ability to sign them both as money won’t be an issue, but would they want to stay? Huberdeau is a Quebec native, while Weegar hails out of Ottawa, so the whole “American fleeing Canada” can take a hike.Calgary is making a big bet on themselves for next season and truth be told, even if Huberdeau and Weegar don’t want to re-sign with the Flames, they instantly become massive trade chips.
Given both of their low salaries, they instantly become very palatable rentals and at 50% retained, virtually any team could fit them easily under their cap. It could vault the Flames into a rebuild quickly, should they choose to do so, but lord knows how reluctant that team has been to do so in the past, instead opting for multiple re-tools and missed playoffs and early exits.
Nonetheless, there’s an overarching… weirdness to this deal for me. Maybe it’s the size of the deal, maybe it’s the fact I’m not fully convinced either Tkachuk or Huberdeau can produce consistenly as they did last year.
Tkachuk scored career highs in goals (42), assists (62) and points (104). Huberdeau scored 30 goals, and set career highs in assists (85) and points (115).
Previously, Tkachuk’s highest point total was 77 points, and Huberdeau’s was 92, with his second-highest total being 78 points. What happens if both players turn into pumpkins and become the 80-85 point guys? Probably not the worst outcome, but something to consider, nonetheless.
Tkachuk will be a great addition for the Panthers not only replacing Huberdeau’s point production but by adding some great play-driving ability. His knock? Tkachuk was one of the luckiest players in the league last year with an all-situations PDO of 105.2. If we know anything about PDO, it’s that it always comes back to the mean. In short, expect Tkachuk’s production to dip next year.
Huberdeau, meanwhile, has always been more of a complementary player, than a true driver of play on either end of the ice. He’ll look great as a set-up man for Elias Lindholm, but he too had an inflated all-situation PDO of 103.9, so there’s room for regression to the mean.
To a lesser extent, I wonder about how Weegar’s game will be away from Aaron Ekblad. Weegar served as the primary puck-mover on that pairing last year in Florida. He’ll still be good for a long-time.
So when will we know who won the trade? Likely not until a year from now, to be honest. Will Huberdeau and Weegar help the Flames stay competitive in the Pacific? Will Tkachuk be able to provide on both ends of the ice to offset the Weegar loss? Will the Flames new pending UFA’s want to re-sign?
To me, these are the questions that need to be answered first.
Zach Laing is the Nation Network’s news director and senior columnist. He can be followed on Twitter at @zjlaing, or reached by email at zach@oilersnation.com.