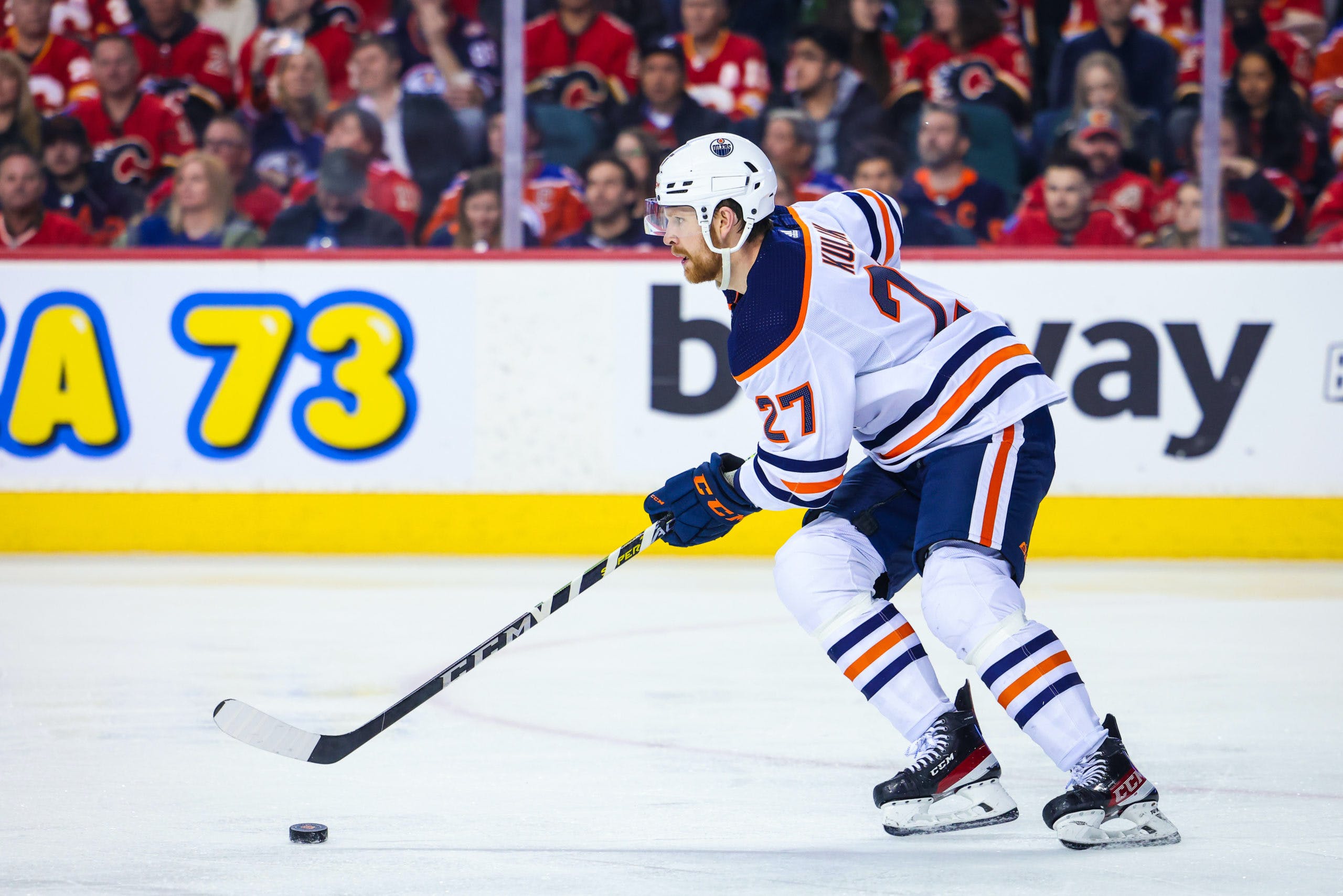 By NHL_Sid
7 months ago
With multiple players in need of contracts, several holes to address, and uncertainties with cap-space, it’s shaping up to be another busy off-season for Ken Holland and the Edmonton Oilers.
Firstly, there’s the conundrum with Edmonton’s wingers, as Evander Kane’s asking price is currently quite lofty, and both Jesse Puljujarvi and Kailer Yamamoto are pending RFAs.
Edmonton must also pursue a goaltending upgrade, with Mikko Koskinen signing a two-year deal in Switzerland with HC Lugano. Mike Smith retiring doesn’t seem too likely at this point, but it is a non-zero possibility. Nonetheless, even if he does return, relying on Smith at his current age is a risky bet.
However, Edmonton’s defence isn’t close to perfect either. This was evident in the Western Conference Finals in which Colorado scored 22 goals against Edmonton in their four-game sweep; limiting GA is an area Edmonton must improve upon. Of course, goaltending obviously occupies a significant role in that as well, but for the Oilers to take that next step, the defence core cannot be downgraded.
Building a stable defence core for next season begins with re-signing Brett Kulak.
Dealt from Montreal for William Lagesson and a conditional 2nd round pick at the 2022 Trade Deadline, Kulak has proven to be a valuable 5v5 asset for the Oilers in several ways. In this piece, I’ll outline how Kulak fills a hole for Edmonton, and why letting him walk would be a considerable step back for this team.
*All microstats via Corey Sznajder, all other stats via EvolvingHockey and NaturalStatTrick unless stated otherwise

Style-wise, Kulak is an excellent fit for the Oilers

Here’s a look at how Edmonton’s defencemen have performed at entry defence.

It’s easy to see how Kulak stands out, in a positive manner.
Bouchard does a splendid job at preventing carries against, and is above-average at denying the zone, but he’s still prone to allowing chances off the rush. Cody Ceci’s strength is his in-zone defence; he still remains a very good defensive player, but his entry defence is rather ordinary. Tyson Barrie allows an alarming rate of entries against, while there’s a valid argument for Duncan Keith being the league’s worst player at defending chances off the rush.
Kulak, however, performs well in every category. He forces dump-ins against, closes gaps, stands up the blue-line to deny entry attempts, and excels at breaking up odd-man rushes and preventing rush chances in general.
For the most part, Edmonton’s rush defence significantly improved under Woodcroft and Manson’s direction (Nurse and Bouchard saw the biggest improvements, Ceci stayed about the same, while Keith still struggled), but Kulak still led the way among Oilers defencemen in several categories.
Additionally, defending the rush was an area that Edmonton mightily struggled with, in the Western Conference Finals; rush shot attempts per hour were 24.3 – 17.1 in favour of Colorado.
This is precisely why I was a vocal advocate for Kulak to play more ice-time in the playoffs. Nurse played with a torn hip flexor, and Keith’s inefficiencies at defending the entry continued; an alarming 72% of Keith’s entry targets against led to clean, controlled zone entries.
With the departure of Dave Tippett and Jim Playfair’s brutal neutral zone system, I expect most of Edmonton’s defencemen to continue to see improvements next season. But if Edmonton allows Kulak to walk, it’s highly doubtful that they thrive in this facet.

In the 275 5v5 regular-season minutes in which Kulak played with Edmonton, the goals were 17 – 12 in favour of Edmonton.
In this sample, he actually led Edmonton’s defence core in goal differential. He performed exceptionally well in regards to expected goals as well, with the xG placing at 14.7 – 11.0 in favour of Edmonton with Kulak on-ice.
These exceptional results continued in the post-season. Again, he led Edmonton’s defencemen in goal differential, at an excellent 62%, and ranked 2nd in xGF%, just behind Evan Bouchard.
Kulak is also an exceptional penalty-killer. Among Edmonton’s defence, he ranked 2nd in short-handed goals against/60, and 1st in SH expected goals against/60.
These strong results aren’t something new for him either; in his prior three seasons with Montreal, Kulak posted a 54% goal differential, and a 55% expected goal differential. In the past two seasons, his impact on suppressing scoring chances (RAPM xGA) ranks in the 90th percentile.
All of this suggests that when Kulak steps on-ice, the team is simply better. Kulak helps tilt the ice, as both Montreal and Edmonton have spent much less time in their own zone with him. Most of these strong results are due to his smooth skating abilities, efficiency at exiting the zone with possession, and as stated above, his splendid entry defence.
One may argue that quality of competition plays a significant role in Kulak’s results, as the pair of Kulak – Barrie didn’t play the most important minutes. However, that doesn’t necessarily mean that Kulak must play in a sheltered role to excel.
PuckIQ splits quality of competition into three tiers of players; elite, middle and gritensity. Here’s how Kulak performs against elite competition.

Even against top lines and defence pairs, Kulak manages to post strong results. He consistently ranked atop Montreal’s defence core in actual goal differential, and DFF%.
His raw DFF% was below-average in 2021-22, primarily due to Montreal’s brutal season, but his DFF% relative to the team was marvellous. He also managed to finish the season at a net positive in goal differential.
In prior seasons, Kulak’s goal differential, raw DFF%, and relative DFF% also support that his results aren’t simply due to sheltered roles. I’m not implying that he’s some superb top-pairing defenceman, but multiple facts suggest that he’s capable of playing a larger role on the 2nd pair.

Although he may rack up a ton of points on the PP, it’s evident that Barrie’s defensive game at 5v5 has been a major weakness for several years.
Among the 11 Oilers defencemen with a minimum of 400 TOI in the past two seasons, Barrie ranks 10th in goals against/60, and 9th in expected goals against/60. His impact on preventing scoring chances ranks in the 9th percentile; put differently, 91% of the league performs a superior job at preventing scoring chances.
When playing substantial minutes alongside McDavid and/or Draisaitl, Barrie’s production totals and on-ice offensive results can be quite good, but his coaches have never uncovered a role that allowed him to post defensive results at even an average level.
At least, not until the arrival of Brett Kulak.

In a sample of 347 regular-season and playoff minutes, Barrie and the Oilers allowed a substantially lower number of goals and chances with Kulak on-ice, as opposed to without.
Overall, the duo of Kulak – Barrie posted an excellent 64% goal differential, and a 55% expected goal differential. Kulak unquestionably elevated Barrie’s two-way game.
Of course, 347 TOI isn’t the most sizeable sample size to deduce an exceedingly accurate conclusion, and the pair of Kulak – Barrie have currently posted borderline elite results; over an entire season, I’m doubtful that their results will be this good.
Nonetheless, at this current point, essentially nothing suggests that Kulak didn’t elevate Barrie in the TOI they played together. History indicates that playing alongside Kulak remains Barrie’s best (and perhaps only) bet in regards to posting positive 5v5 results.
With all of this said, I’d also love to see Kulak play alongside Bouchard at some point. That pair would be phenomenal at shutting down entries against.
Additionally, Bouchard’s most significant weakness is his in-zone defence. Pairing him alongside a player that excels at limiting time spent in the DZ would be a beneficial move for Bouchard. Kulak is also rather ordinary offensively, so Bouchard would assist in adding some offence to that pairing. I’d expect a duo of Kulak and Bouchard to produce much more 5v5 offence as opposed to Kulak – Barrie.
Kulak – Ceci was also a fine pair in the limited amount of minutes they played together. That duo remains a solid option as a shutdown pair.

As mentioned here, there seems to be mutual interest between Holland and Kulak for him to remain in Edmonton, which is certainly encouraging.
His contract should be fairly cheap. OilersNow host Bob Stauffer had previously mentioned that Kulak had wanted a contract of $2M x 4 from Montreal. Per EvolvingHockey’s contract projections (these projections are based on what contracts typically rely on, such as age, points, time-on-ice, etc), Kulak is projected at $2.9M for about 2-3 years, which is a very fair deal.
There isn’t much argument against signing him at these prices, and I’d argue that he’s worth even more.
Kulak has the ability to play LD and RD, and he can post strong results in both a 2nd-pairing and 3rd-pairing role. He’s managed to uplift Barrie’s defensive game, and he could also comfortably slot alongside Bouchard or Ceci. All of this makes him a quite versatile asset. Furthermore, as stated previously, he’s a superb fit in Edmonton due to his ability to efficiently defend the rush.
Kulak is 28, which is certainly not too old, and it’s highly unlikely that he declines soon.
Speaking of age, Duncan Keith turns 39 in less than a month. With Keith’s awful rush defending abilities, alongside the fact that he’ll likely regress further with his advancing age, a sheltered 3rd pairing role is likely the best role for him moving forward. Bringing back Kulak and granting him heavier minutes will lighten the load off Keith.
To conclude, there are plenty of things that Holland must accomplish this off-season, and hopefully, re-signing Brett Kulak is high on his to-do list.
Find me on Twitter (@NHL_Sid)
Nation Takes
News
Oilers Talk
Recent articles from NHL_Sid