Winning Ugly Is Better than Losing By Jason Gregor
1 year ago
One of the most annoying phrases in hockey is “You can’t win in the playoffs playing that way,” when it is uttered in the first week of the regular season. It is such a ridiculous statement. How a team plays in October has zero impact on how they play in May. Teams can play well early in a year and still lose in the playoffs, while others can be leaky early yet they tighten up later in the season.
Most teams have ups and down throughout the year. Not every game will be a masterpiece. There will be sloppy games. Some will be boring and lacking in offence. Others will be high flying. The most important thing is getting wins so your team gets to the playoffs.
Teams can improve small details of their game as the season progresses. They can work on it in practice or by watching video. But practice and video won’t bring losses back. Once you lose, you can’t replay that game. It is over, and from my vantage point earning points early in a season is more important than playing “playoff style hockey.”
Do the Oilers have to tighten up defensively? Yes, and they did that after a loose first 30 minutes where they allowed four goals. In the final 30 minutes they reduced their turnovers, limited the Ducks chances, got a lucky bounce on Evan Bouchard’s first goal of the season. They got the win.
“There are ebbs and flows in a game,” said Dave Tippett. “They can’t all be masterpieces. They can’t all be games where the coach walks out and says ‘That was great.’ It was good we found a way to get two points.”
I’ve covered the Oilers for over 20 years and during most of them, the team was not competitive. I’ve seen what bad teams look like and this edition is a not a bad team. They will be in the playoffs. How well they do is something we can dig into in March and April. And even then, no one really knows how a team will perform in the playoffs until they begin. It is an entirely different season. There is no better example than the 2019 Tampa Bay Lightning. They dominated the 82-game regular season winning 62 games. They were significantly better than every team for seven months. They were first in goals/game at 3.89 and sixth in goals against/game at 2.70. Their power play was first at 28.2% and their penalty kill was also number one at 85%.
Then the playoffs began and they lost four straight to Columbus. Did Tampa not play “playoff hockey” in the regular season?
Let’s look at last season and compare the ebbs and flow of a regular season by month. Even the Cup Champions will have ups and downs
After a stellar first 19 games, Tampa’s goals against increased as the season went on. And their offence decreased each month from February to May. Did anyone suggest they weren’t playing “playoff winning hockey?”
The Oilers had a dreadful January defensively, while February and April were their best months limiting goals. There will be ups and downs, and teams hope that there are more ups, and they find a way to have those “ups” in the playoffs.
The most important stat early on for the Oilers is that they are 3-0. There is ample time to tighten up their game, and they showed it last night in the final 30 minutes that they can clamp down and limit chances. They have had really strong stretches of play at various times in their first three games, and they’ve also had some stretches where their puck management has been subpar. It will be a focus in video, but everything always feels better for a team when they win. Coaches can be a bit harder on players when the team is winning, because they have more confidence.
When the team is losing the coach has to try to pump them up, and be leery of not deflating their confidence even more by showing negative clips in the video room. I bet Dave Tippett walked in the room last night and said something about how they need to tighten things up, protect the puck better, but then finished with how he liked their play in the final 30 minutes and it was a nice comeback win.
Now is not the time for the coach to be hammering his players. Positive reminders about areas he wants improved will be mentioned, but he will also focus on the positives, and there have been many since the team is 3-0. 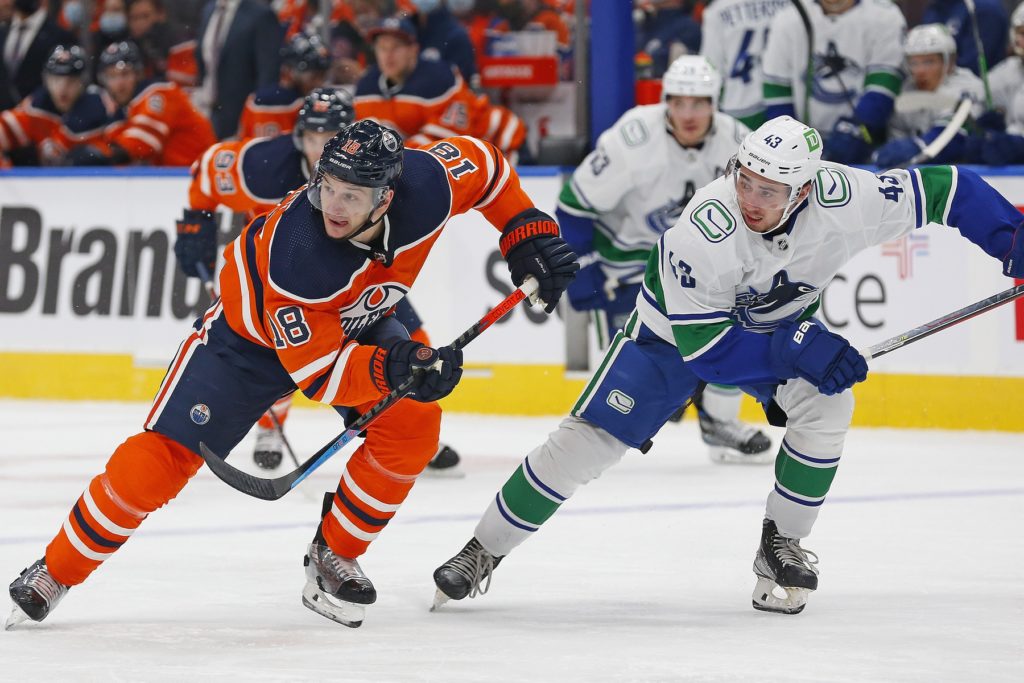 Oct 13, 2021; Edmonton, Alberta, CAN; Edmonton Oilers forward Zach Hyman (18) and Vancouver Canucks defensemen Quinn Hughes (43) chase a loose puck during the third period at Rogers Place. Mandatory Credit: Perry Nelson-USA TODAY Sports
Here is what I see as the pros and cons so far.
PRO: The Warren Foegele-Derek Ryan-Zack Kassian line has been the Oilers most consistent line. Foegele and Kassian have as many 5×5 points as McDavid, and Kassian missed the first game. They’ve been excellent in all three zones and have outshot, out-chanced and outscored the opposition. They look like a quality third line that can complement the top six.
PRO: The fourth line hasn’t been on for a goal against in three games. They haven’t played much, but considering how bad the fourth line got outscored the past few seasons, breaking even is positive progress.
CON: The second line of Ryan Nugent-Hopkins, Zach Hyman and Kailer Yamamoto has yet to score a goal and last night Hyman and Yamamoto were on for three goals against and RNH was on for two. RNH changed as the Ducks went up ice and Nicolas Deslauriers scored on the rush a few seconds after McDavid stepped on the ice. He took the minus, but wasn’t involved in the play, so you could argue the RNH line was on for three goals against.
The line was excellent on opening night against Vancouver, okay v. Calgary and struggled against the Ducks. Yamamoto and Brendan Perlini changed lines for the third period. Yamamoto will need to play better if he wants to remain in the top six.
PRO: The power play is still dominant with five goals on 12 chances (41.7%). And the second unit has already scored a goal. That unit only had one in 56 games last year.
CON: Darnell Nurse and Tyson Barrie weren’t struggling as a pair. Barrie has had a slow start to the season, similar to last year, and he was moved to the third pairing with Slater Koekkoek after Sam Steel scored his second goal. Barrie needs to be much more assertive.
PRO: Bouchard has played very well in all three games. He has been really solid in his own end. At the start of the season I wrote I expected him to be Darnell Nurse’s partner by the midway point of the season. I might have been too late on that. He’s been very good defensively, and in the third period he had an assist and got a fortuitous bounce for his first goal of the season. He has been excellent.
PRO: Cody Ceci and Duncan Keith have been a solid second pair.
Ceci’s has a 54.5SF%, 52.6SCF%, 58.69xGF% and most importantly a 60GF%. Keith has a 50SF%, 58.8SCF%, 63.4xGF% and 60GF%. Edmonton needed a solid second pair, and early on they’ve been exactly that.
CON: Edmonton has allowed the fourth most SA/game at 5×5. They are 16th in scoring chances against, which is better. They are 16th in shots for/game and 11th in scoring chances, so they are still generating more than they allow, and they are 9th in xGF%, so they are far from awful. But they will need to reduce their shots against at 5×5 moving forward.
PRO: McDavid and Draisaitl each have eight points in three games. McDavid had 62 points in his final 30 games last season. Combine that with his start and it is 70 points in 33 games, which prorates to 174 points in 82-games. Draisaitl has 56 in his last 33, which is a 140-point pace. The scary thing about McDavid and Draisaitl is they haven’t dominated play at 5×5 yet. They’ve played well, but last year they had games where they almost played keep-away on some shifts. To have eight points in three games and, according to Draisaitl, not even be the most consistent line on the team (he said Ryan’s line has been) is a pretty positive sign for the Oilers.
CON: Nugent-Hopkins is 36% on faceoffs. He is 12-21, and he was 6-3 on opening night. He is 6-18 over the past two games. Ultimately, this is why McDavid and Draisaitl will be centres in the playoffs, but for now Tippett can experiment with different line combinations. Hyman is 8-2 (80%), so he can take draws on his strong side when playing with RNH, but ultimately I believe RNH is better suited to play wing in meaningful games.
PRO: Draisaitl is 38-20 on faceoffs (65.5%), Ryan is 23-14 (62.2%) and McDavid is 13-7 (65%). Ryan is even more dominant at even strength going 18-5. It bodes well that Tippett has three solid faceoff guys at important times in the game.
PRO: The Oilers are 3-0. San Jose is the only other undefeated team (2-0) in the Pacific. Banking points early in the year is such an advantage. Playing catchup can be draining.
The Oilers needed to get off to a good start and they have. Now they go on the road for the first time and they have a huge opportunity to defeat a bad Arizona team, and an injured Vegas team, and be 5-0 before they have a few days off for team bonding in Vegas on the weekend.