With the No. 29 pick in the 2022 NHL Draft, the Edmonton Oilers could select… Jagger Firkus? 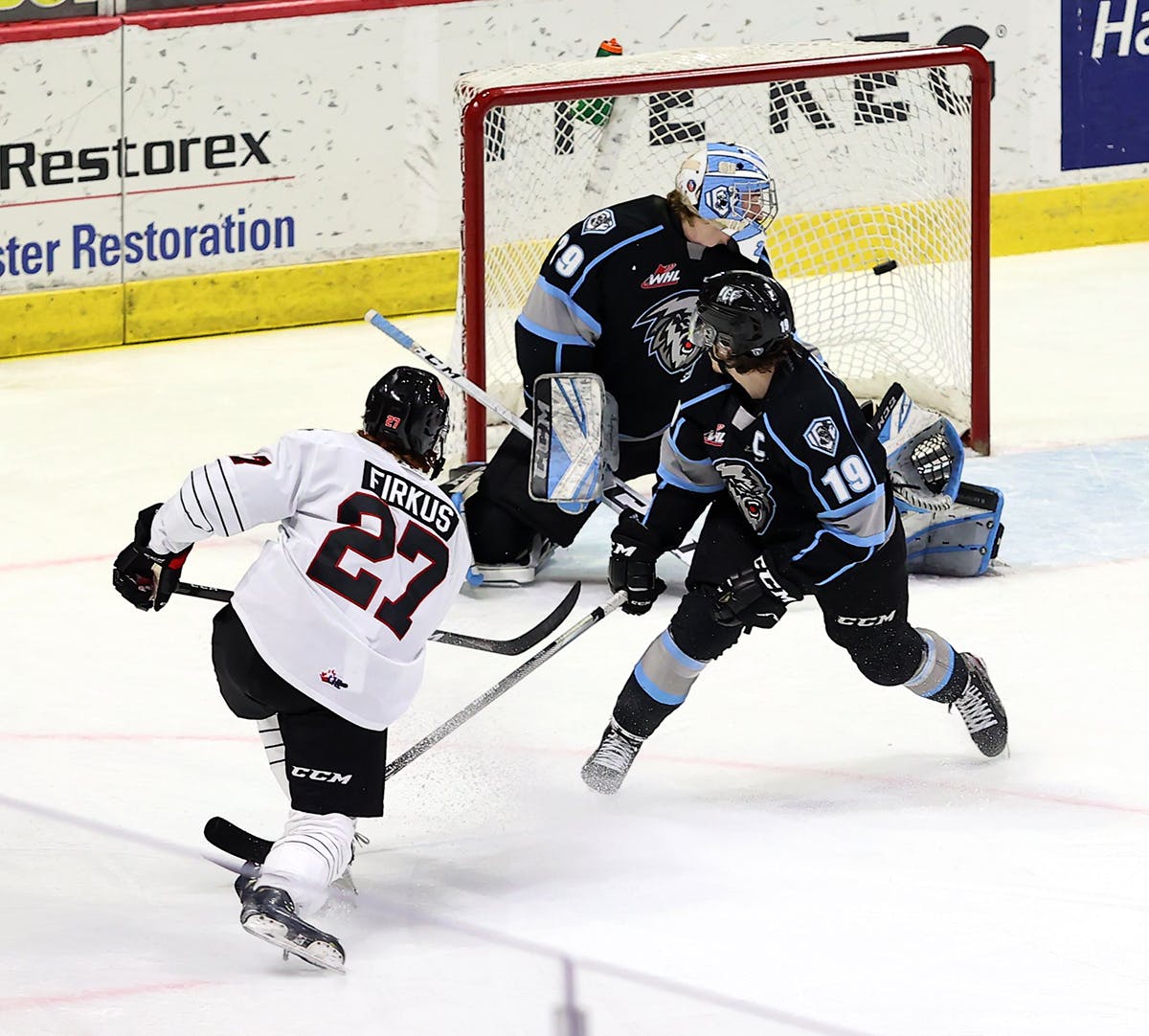 By Cam Lewis
6 months ago
My first two draft prospect profiles were on Jack Hughes and Reid Schaefer, a pair of forwards who would be reasonable targets for the Edmonton Oilers if they opted to trade down from No. 29 overall to stockpile more picks later on.
For this one, I’m going to move away from low-ceiling, high-floor types that will likely be available in the second round and instead focus on a player who’s ranked at high as No. 16 overall on pre-draft scouting lists but could fall into Edmonton’s lap at No. 29 overall if history repeats itself.
Jagger Firkus scored 36 goals and 80 points for the Moose Jaw Warriors of the WHL this season and might wind up as this year’s version of somebody going lower in the draft than they should because teams are worried about drafting undersized forwards.
Generously listed at 5’10” and 154 pounds, Firkus is a high-energy, tenacious forward with excellent scoring and playmaking skills. Having been smaller than his opponents for his whole playing career, scouts say that Firkus has become very skilled at making shifty and creative moves in the offensive zone to dodge contact. He’s also described as a play-driver, somebody who can be the focal point on any scoring line.
It seems almost every year there’s an undersized Little Engine That Could forward who falls in the draft and teams never learn their lesson. The Oilers had a situation like this themselves a few years ago when they selected Kailer Yamamoto with the No. 22 overall pick in 2017 despite him being ranked higher coming into the draft.
Now, there’s obviously no saying that Firkus will fall in the draft, but if he’s available when they do pick, he would be a great addition. The Oilers have done quite well selecting tenacious forwards from the WHL, ranging from Ryan Smyth all the way back in 1994 to Yamamoto in 2017.

With quick hands and one of the best releases in this class, Firkus raised his draft stock throughout the season. He has good-enough quickness with his feet to get around and through defenses and has the hands to make defenders miss. He’s below average when it comes to size but has enough offensive tools for that not to matter as much. Firkus is the kind of player whose team is a bigger threat when the puck is on his stick. He can score from anywhere, but he has the playmaking ability to find the right option instead of just shooting for volume. He had 80 points in 66 games this year. – Chris Peters, Daily Faceoff.
Firkus is one of those little guys who just always seems to be around it. He plays the game with pace, energy, and skill so that you can’t help but notice him shift-to-shift as he dashes around the ice making plays offensively. With the puck, defenders struggle to stick with him off of cuts and when they do he’s got the craftiness to beat them in other ways. Without the puck, he races in and out of pockets to get open. The result is a magnetic game that pulls you (and opposing players) in and then beats them with aggression and intention. Where scouts often ask questions about drafting a kid who is as light as he is in and around the first round (he’s listed at 153 pounds), the way he plays the game has really endeared himself to just about everyone.
He does not lack confidence in his abilities either. Here’s Firkus on the constant size questions and his message to NHL teams: “I don’t care and that’s the truth. I honestly don’t care. I’ve been small my whole life and it’s not like I’m just going to magically be 6-foot-1.” – Scott Wheeler, The Athletic.