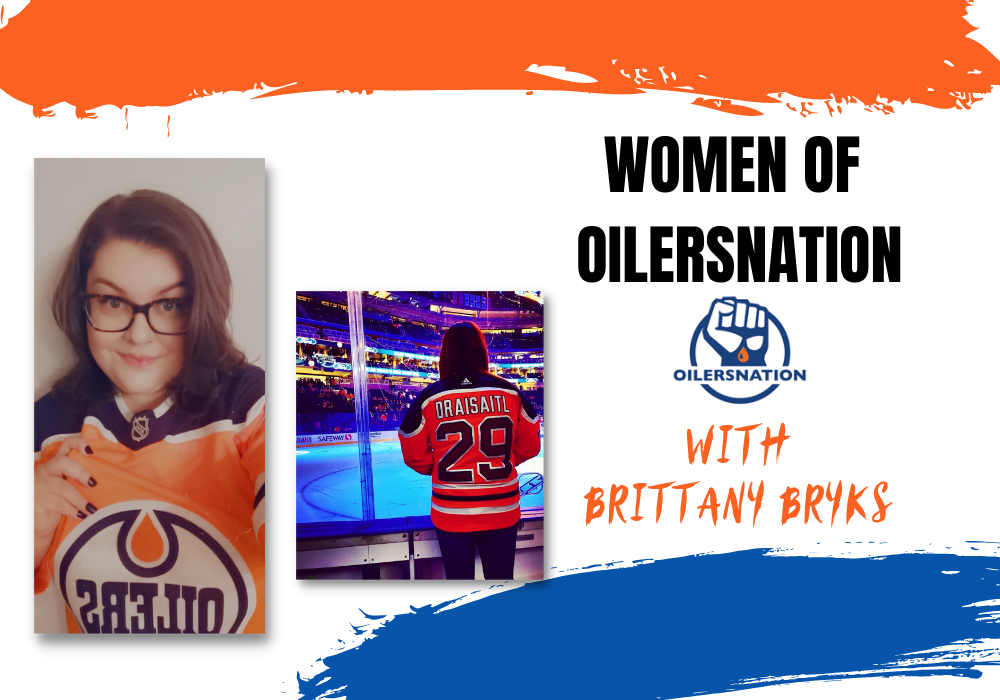 By Kyla Lane
11 months ago
Brittany Bryks is a passionate Oilers fan and an advocate for women in sports, especially female hockey fans. Raised in a small Alberta town, Brittany fell in love with hockey early and has been an Oilers fan since before she could remember – let’s meet her!
If you missed the last Women of Oilersnation feature on Donna Overacker, you can read it here:

KYLA: Who is Britt? What’s your day job, what are your passions, what’s something interesting about you?
BRITTANY: Hello to all my fellow Oilers fans, especially my ladies! I’m so excited to be interviewed for this article! First I just want to say thank you to Kyla for asking me to be a part of this incredible community! her Soul Shot and Kyla are absolutely amazing and I am so honoured to be included along with all the other badass female hockey fans that have been interviewed so far!
So who am I? Well my name is Brittany (my friends call me Britt) and I am a hardcore diehard Oilers fan living in the hub of Oilers Nation, Edmonton. I am formally trained as a Veterinary Technologist, which is basically a nurse for animals! I worked in various veterinary clinics around Edmonton for seven years, but in 2021 I decided to change up my career a bit. I am currently an instructor in the Veterinary Office Assistant program at NorQuest College.
Obviously from my job, I’m sure you can figure out that one of my passions is animals. I’ve always had a drive to care for animals and that translated into my career. I am still incredibly passionate about animal care and although I don’t actively work in a clinic setting, I am actively involved with a few animal rescue groups in the city, as well as a VOCAL advocate for educating pet owners on the importance of veterinary care for their furry family member, at all ages! I also am owned by a rescue cat named Norman, and he is definitely my spoiled fur-child. 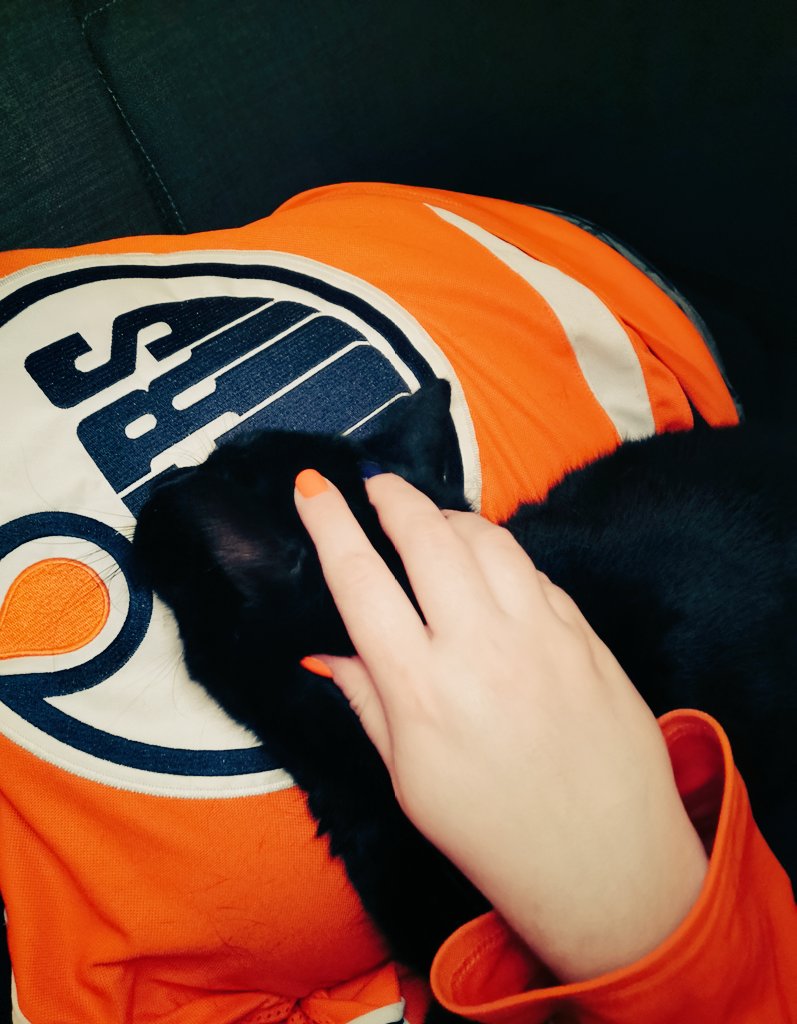 A few random things about me that pertain to my passions are:
I’m an avid reader. Basically a bookworm with arms and legs. You’ll pretty much never find me without a book, including at Oilers games (before the ‘no purse rule’… don’t get me started on that!).
I absolutely LOVE and thrive in the outdoors. I’m from a very small town in Northern Alberta and I try to go back as often as I can to soak up the good vibes of nature. Especially in the summer! We have gorgeous lakes and woodland and I definitely will always be a rural girl at heart. There’s no better medicine than putting your bare feet on the Earth and smelling the fresh air, if you ask me!
One of my more ridiculous passions would have to be watching Friends repeatedly, even if it’s just on for background noise. I’ve seen every episode probably 75-100 times and no, that’s not an exaggeration! I can pretty much finish any quote you’d throw at me, so if you ever see me definitely put me to the test!
I’m not really sure if they’re “interesting”, but a couple random facts about me are: I’ve never broken a bone, and I am a HUGE Marvel fan.
KYLA: How did you get into hockey and sports in general?
BRITTANY: When I was young, probably seven or eight, I remember my dad would always watch hockey. Especially Hockey Night in Canada on Saturday nights! Being from Northern Alberta, obviously he was an Oilers fan. My parents were separated when I was about five, but every time we’d visit my dad on weekends we’d watch HNIC when the Oilers played. We usually wouldn’t be able to finish watching the game before we’d head back to my mom’s, but we’d listen to it on the radio in the truck on the way there. My dad and my Gido (his dad) definitely were the reason I became such a passionate hockey fan! I’ve been cheering for the Oilers since before I even knew I was. Being an Oilers fan is basically in my blood. And clearly that hasn’t changed as I’ve gotten older.
I also played volleyball for numerous years through junior high and high school. I started playing in the 6th grade and basically played two seasons a year until I graduated. My mom was a volleyball player when I was young and I used to go watch when she’d have her rec league games on weeknights. She definitely inspired me to want to play!
My grandpa was also a huge CFL fan and he cheered for Edmonton throughout my childhood. I definitely didn’t become a football fan early in life however. Recently, I’d say within the last five years, I’ve definitely been more into watching football, both CFL and NFL. My grandpa and grandma also curled when they were young so we were surrounded by watching curling on TV when we were kids. I am definitely an avid curling fan, and my grandma’s cousin is actually the coach for Brad Gushue and Team Canada! So our entire family always supports Canadian curling, both men’s and women’s.
KYLA: How has being a part of sports impacted your life and how would you like to see more women be included in the hockey community?
BRITTANY: Sports of all types have been a part of my life since I was a young girl, and being a fan as well as a player of many of them has definitely influenced the way I work through problems in life. It’s definitely cliché to say, but being part of a team teaches you how to work with people once you become an adult. It teaches you problem-solving and communication skills, even if you don’t realize it at the time. Sports to me are also a way that I connect with my family members, and watching them has definitely been part of my family bonding experience throughout my life.
I definitely think that as a female sports fan, or a female athlete, it’s hard to break through those barriers of being judged just for being a female. Especially with social media being so mainstream nowadays. Men like to challenge female sports fans on their “knowledge of the sport”, instead of letting them just enjoy the sport and be involved in the fan community. I think what OilersNation is doing in partnering with her Soul Shot could be the best stepping stone to involve the female Oilers fanbase to another level!
There are definitely a HUGE number of female Oilers fans, especially on Twitter, and oftentimes we get overlooked as not being “legitimate” fans. For me, it’s never been about what stats I can memorize or remembering gameplay from decades ago. Being a female hockey fan who, in my opinion, is very knowledgeable about hockey in general and hockey operations to some degree,  I am still a fan even if I don’t know an extraordinary amount of details about hockey and/or the Oilers.
Women should be able to express their love for their teams and sport without feeling like they have to “prove” why they’re a fan. I think expanding the OilersNation fandom to include more female voices, and developing more content and events targeted to engaging the female audience would be a phenomenal way to include more women in the hockey community in Edmonton. Of course, I’m not saying all the female fans don’t appreciate the usual sports fan community engagement. I would never dream of speaking for all female Oilers fans. However, I do think there needs to be more effort to engage with the female fans. 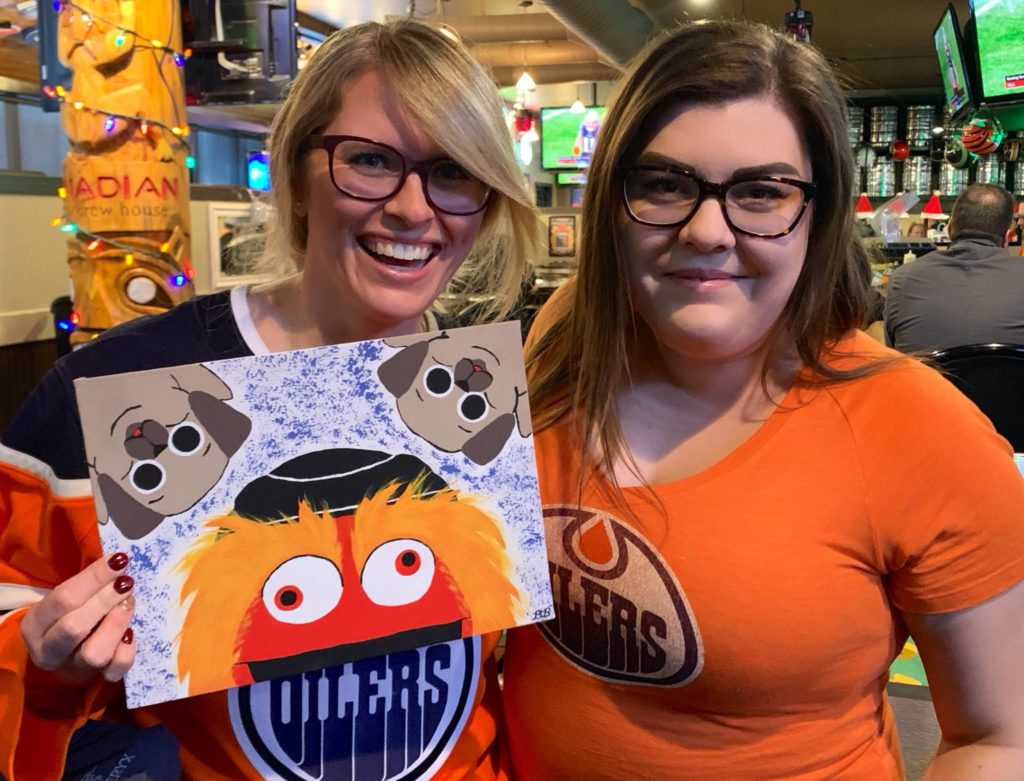 KYLA: What’s your favourite Oilers memory?
BRITTANY: My favourite Oilers memory is actually two different ones! They’re both such amazing memories that I can’t pick just one.
The first would have to be the Cup run in 2006-2007. After the Game 6 win that forced the series into a Game 7, my brother and I rode our bikes down the main street of our hometown. Decked out with Oilers flags and orange & blue streamers, we were accompanied by a large group of Oilers fans driving their decorated vehicles down the street as well. Everyone was honking and cheering and celebrating. We were so incredibly shocked that the Oilers had won that game, especially after the loss of Roli. It was one of the most exciting days of being an Oilers fan I’ve had in my entire life. I just remember being so incredibly happy. That memory has stuck with me ever since. 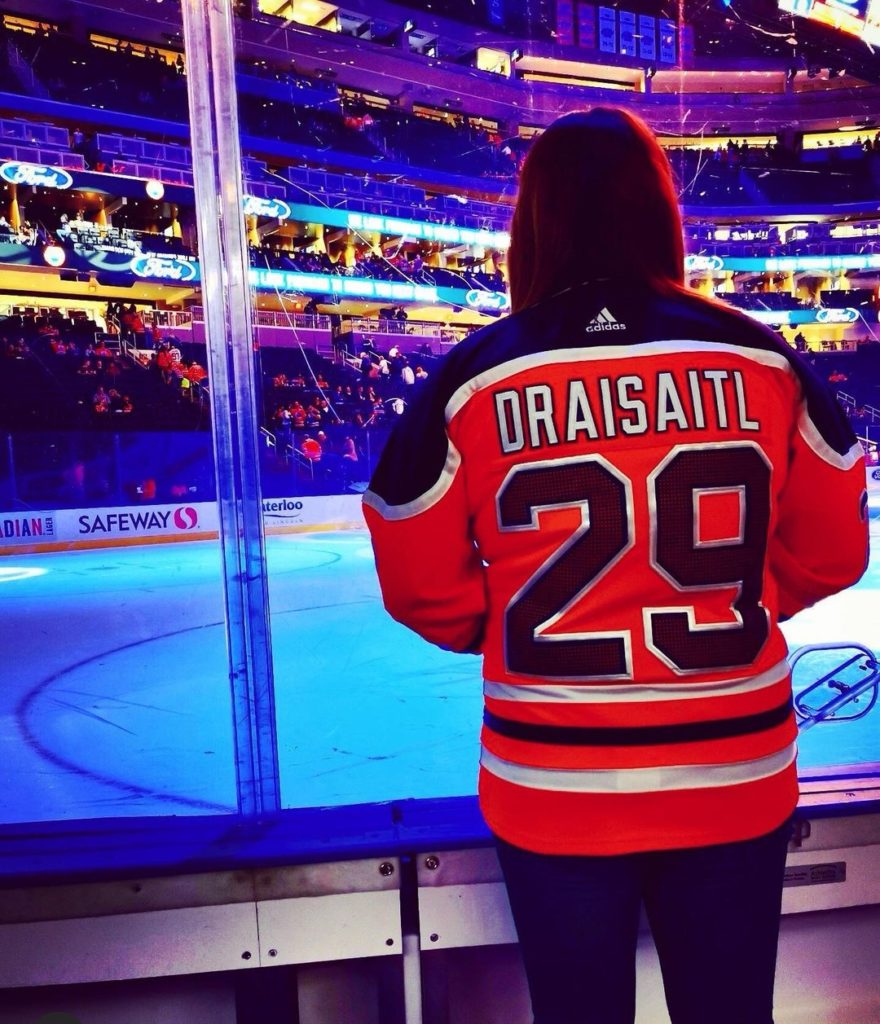 The second would definitely have to be meeting Leon Draisaitl at the Oilers signing event a few years ago. I was lucky enough to get tickets from a friend who was a season seat holder. I took my friend Veronica, and we were able to meet a bunch of the players that were dispersed through Rogers Place. I got my Oilers flag signed by Darnell and Leon, and we were able to meet Puljujarvi and get his autograph as well. Meeting Leon was one of the greatest days ever! I was so excited and nervous but he was so incredibly kind. He spoke with me for a minute and I definitely could not stop smiling. If you follow me on Twitter you know Leon is my absolute favourite player, and I definitely will never forget being able to meet him. Hopefully it won’t be the last!
KYLA: What does hockey and being a part of the Oilersnation community mean to you? 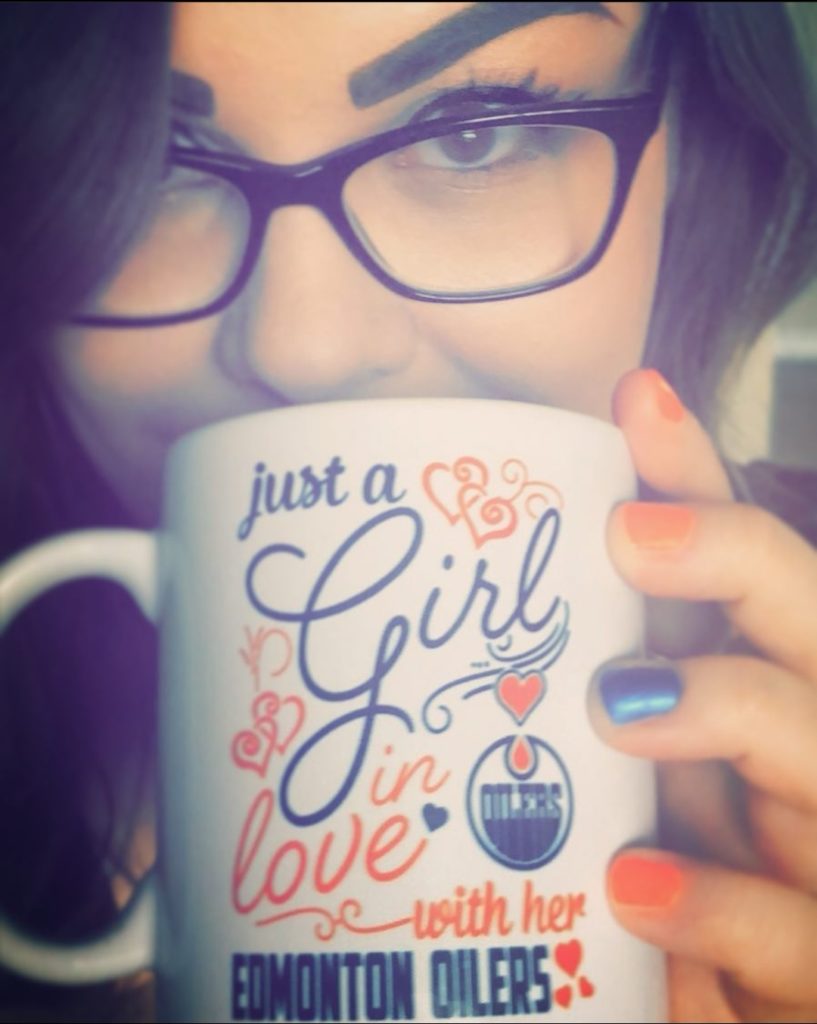 BRITTANY: Hockey is my passion. If you ask any of my friends or family, they would tell you that sometimes I’m too passionate about it (sorry neighbours!). Growing up in a community that was 100% about minor hockey leagues and having a family that cheered for the Oilers, I don’t think I would have been able to not become a hockey fan! Hockey, and the Oilers specifically, are part of who I am. If you ask anyone who knows me to describe me, there’s a 97% chance they will say ‘Oilers fan’. (See what I did there? ;))
Becoming part of the OilersNation community through Twitter has been one of the things I’m most thankful for as an Oilers fan. I’ve met and made so many new Oilers fan friends through this outstanding community. And although they started as just Oilers fan friends, they’ve truly become some of the greatest friends I could have ever asked for.
The OilersNation community is one of the greatest groups of people in the hockey world!
CONNECT WITH BRITTANY ON INSTAGRAM & TWITTER!