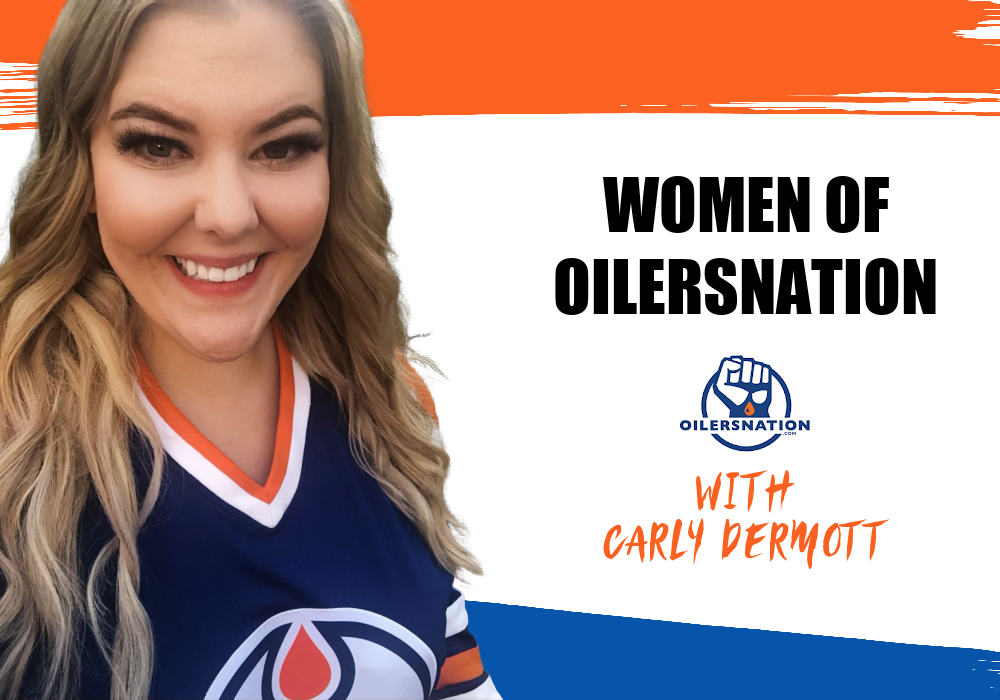 By Kyla Lane
1 year ago
Hi friends! Two things to start us off this week:
Last week I featured Nahreman Issa from CTV! If you missed it, you can read her feature here: 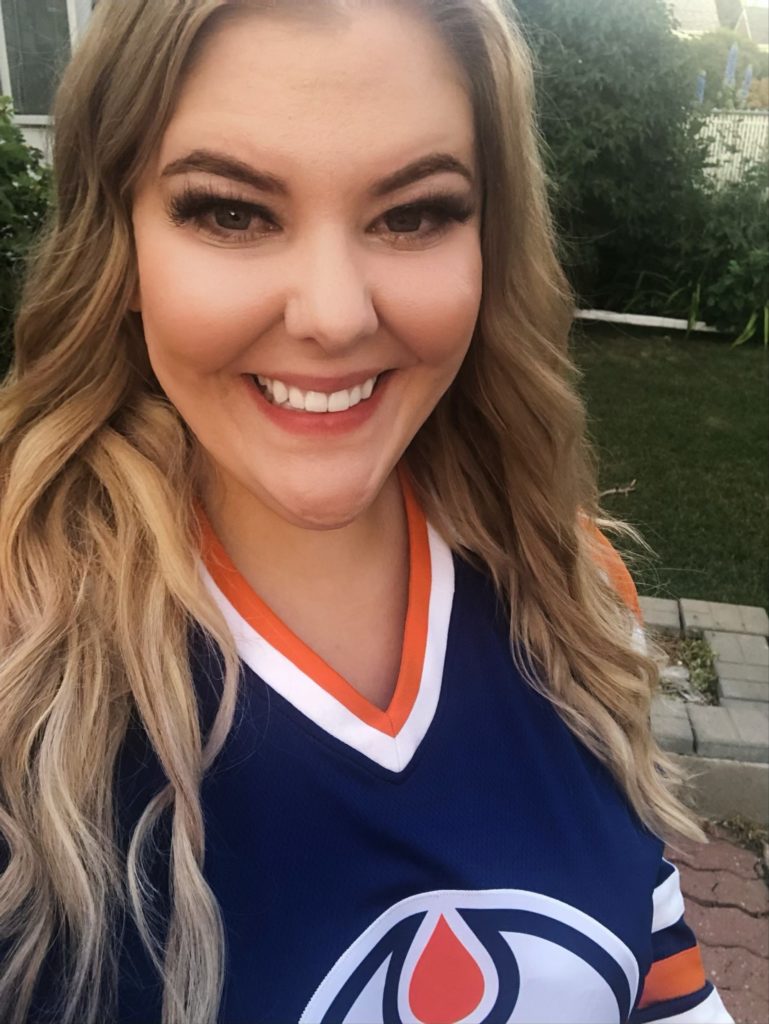 KYLA: Who are you?! What’s your day job?
CARLY: Hello, hello! Most of you have me muted on Twitter (@carlyderms). You can find me branding businesses and organizations throughout Canada. What’s branding you didn’t ask? Our company provides consulting, graphic design, print, and installation—everything from vehicle fleets, advertising, facility signage, you name it. Our work here at home can be seen in places like Rogers Place, so the next time you’re enjoying a $12 beverage on the concourse you can look around and think of your good internet friend, Carly.
KYLA: How did you get into hockey and sports in general?
CARLY: My Grandparents adored everything about hockey. My Grandpa was the President of Minor Hockey Alberta and my Grandma worked with the Edmonton Minor Hockey Association. In 1991 there was a hockey tournament in the city and an equipment sell/swap was organized. Afterwards there were dozens of pieces of equipment left without a home, so my Grandpa (with the help of friends) loaded up his 1980’s beige Chevy and they made sure that unused equipment made its way into the hands of kids. That single day snowballed into a local charity called Sports Central. Sports Central has since provided over 145,000 kids in Alberta with free gear they need to enjoy the sports they love. My Grandparents were involved with Sports Central for as long as they could be, with my Grandma still working the front desk up until a few years ago. Two extraordinary people who were devoted to this city, the sports they loved, and letting kids be kids. In 2013 the City of Edmonton named a park in their honour, Dermott District Park. 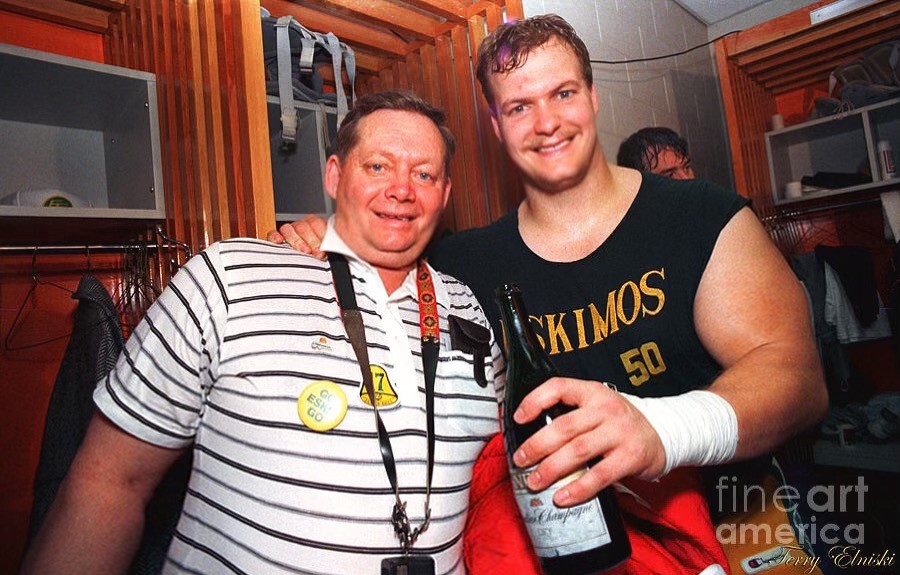 Growing up we were very much a sports family. My Dad, Blake, played 14 seasons with the Edmonton Eskimos. My parents had the house where everyone gathered, thanks to the giant in-ground pool in the backyard. Who has the audacity to have a pool in Edmonton? They did. We were raised in this idyllic environment surrounded by athletes from all over North America (some of which slept on our couch), and goodness gracious did we eat a lot of chilli. So sports (and carbs) were just going to be apart of my life.
If there was a millisecond of interest my parents would have us signed up the next day. I’ve played 12 different sports—everything from equestrian riding, to football, to basketball. I also played baseball for one season but I never swung the bat. I was 5’9” by the time I turned 12, so I figured out quickly that pitchers my age couldn’t get the ball in my zone. I would proudly walk to first base each time to the absolute dismay of everyone watching. I vividly remember my dad shouting from the stands one game, “JUST SWING ONE TIME!”, but nary a swing. Did I mention I was stubborn?
KYLA: What’s your favourite Oilers memory?
CARLY: The first memory that instantly comes to mind is Yakupov’s game tying goal in 2013 and his celebratory slide down the ice. Also Smith vs. Talbot at the Battle of Alberta, because… goalie fights. When the camera panned over to show Smith standing at center ice? I nearly lost my mind.
KYLA: If anyone follows you on Twitter, they’ve seen the mouth-watering photos of food you’ve cooked. Have you always loved cooking or how did this talent come about? Also, when can we buy your cookbook?!
CARLY: [laughs] I’m annoying enough with my cooking posts on Twitter, I don’t know if a cookbook is what the people want!
Rewind to 2006-ish, the Art Institute of Vancouver offered me a scholarship to take their culinary arts program, but I ultimately decided to enrol in a different program and it turned out to be one of my best decisions. So, cooking and baking will forever remain just a fun hobby, and one day I’ll have a chubby husband and one hell of a recipe book to pass down to my grandkids.
KYLA: You spend quite a bit of time adventuring around Edmonton by golfing and hiking—what are some of your fav spots in or around the city?
CARLY: I’m the world’s most average golfer… who loves to golf, and for this reason I sometimes find myself on courses I probably shouldn’t be playing (Texas scramble, anyone?), but it’s the best way to spend an afternoon! ‘Hiking’ is a bit generous for what I find myself doing on weekends but I love a good trail. Elk Island Park is sensational, but there’s also great trails in the city that both me and my dog Heisman enjoy, including Gold Bar, Terwillegar, and Whitemud Ravine. If you’re hitting up these spots for the day-camp BBQs make sure to give me a shout… I’ll take a hotdog with mustard.
KYLA: What does being a part of the Oilersnation community mean to you?
CARLY: If Oilersnation was a house party I would definitely be in the background, filling up the chip bowls and doing dishes. I’m grateful just to be asked to be in this piece alongside so many powerhouse women— all of them being diehard Oilers fans but more importantly community leaders who have made significant impacts within the Oilers fanbase, especially with women and LGBTQ2+. I have no qualms admitting my attitude towards hockey is “Just go out and have fun!”, and Oilersnation seems to embrace (or tolerate?) that about me. I’m thankful, and thankful to you.
CONNECT WITH CARLY ON TWITTER & INSTAGRAM!