By Kyla Lane
1 year ago
Speaking of bad asses (because I’m always speaking of badass women), Jess Jackson is our Woman of Oilersnation this week and she is the raddest human! If you’ve listened to 100.3 The Bear in Edmonton, you’ll recognize Jess’ name from her midday radio show. Let’s meet Jess Jackson!
Last week I featured the amazing Amanda Patrick! If you missed it, you can read her feature here!
If you want to be featured or want to nominate someone to be featured, send me an email or DM on Twitter! 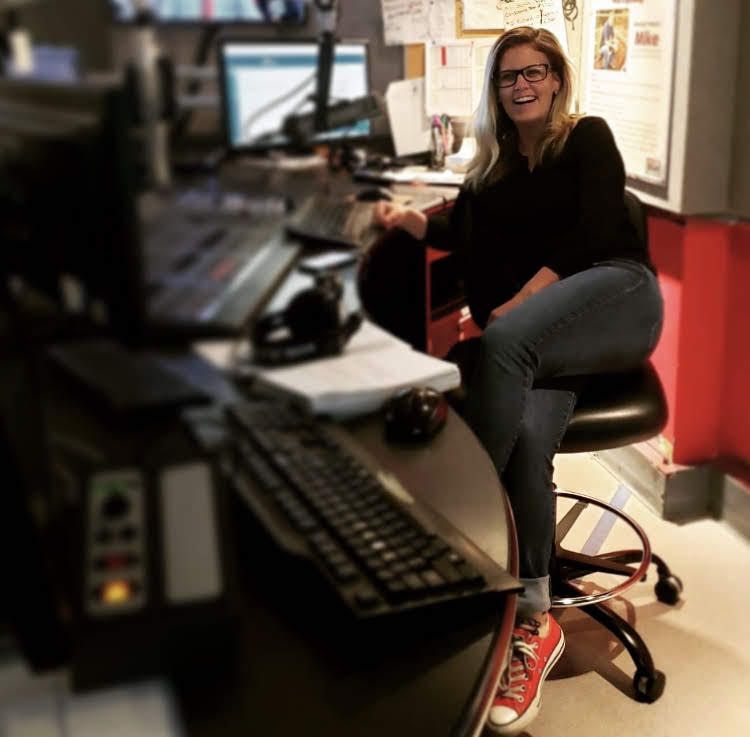 KYLA: Who are you?! What’s your day job, what are your passions, what’s something interesting about you?
JESS: I’m Jess Jackson. I’m a small town Manitoba girl who has called Alberta home for the past 12 years, and specifically Edmonton for just shy of eight years. I live here with my husband Dan, son, and two pups, Lloyd and Maggie. 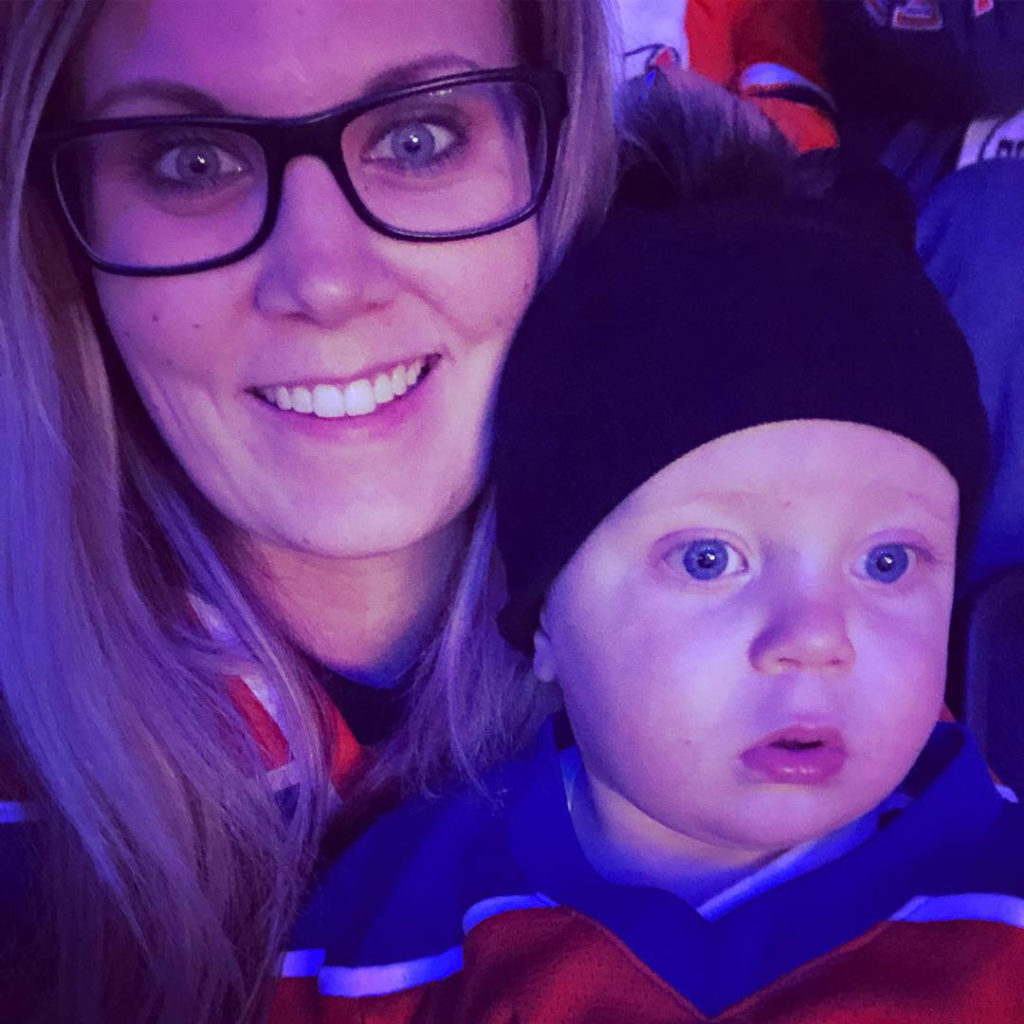 I’m the Midday Announcer (10am-3pm) and Music Director for 100.3 The Bear in Edmonton. I’m also part owner of Twig & Barry’s Apparel Company, a men’s apparel company located in St. Albert.
In my spare time I love to golf, play softball, do anything and everything with my son – his new love of Lego is definitely my new love too. I never built Lego growing up and now I finally understand the obsession!
Something interesting about me? I always struggle with this question – I never think anything is that interesting about myself so how about mediocre/boring things? That’s easier.
KYLA: How did you get into hockey and sports in general?
JESS: Growing up in a really small town, sports was all we really had to do. When it came to sports in school you needed pretty much everyone to go out for the team or there was no team so I did a little bit of everything. I played hockey when I was younger, volleyball, basketball, badminton, track & field. 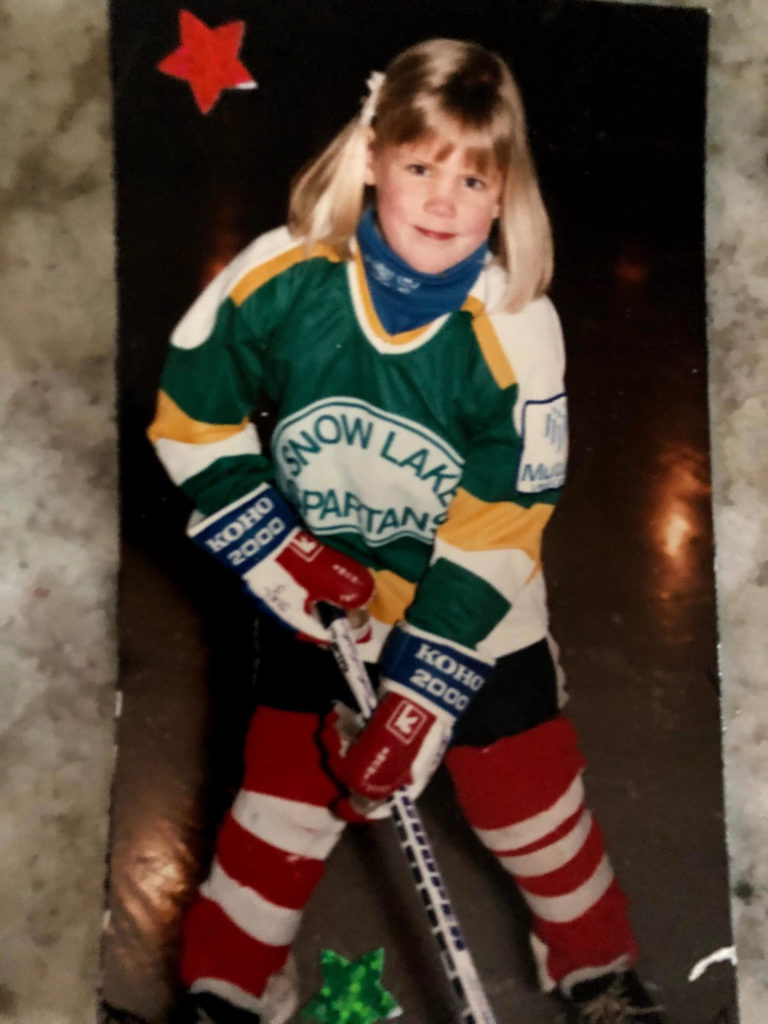 I think I started in hockey because my brother played and I wanted to be just like him. I ended up quitting once I hit Novice but played women’s hockey for the first time in my 20s when I lived in Cranbrook, BC. I absolutely adored playing with those woman, they were fantastic and I miss that a lot. I haven’t mustered up the courage to join a women’s team in Edmonton yet… maybe this is my year!
KYLA: What has your experience as a radio host been like and what’s your favourite part of being a radio host in Edmonton? 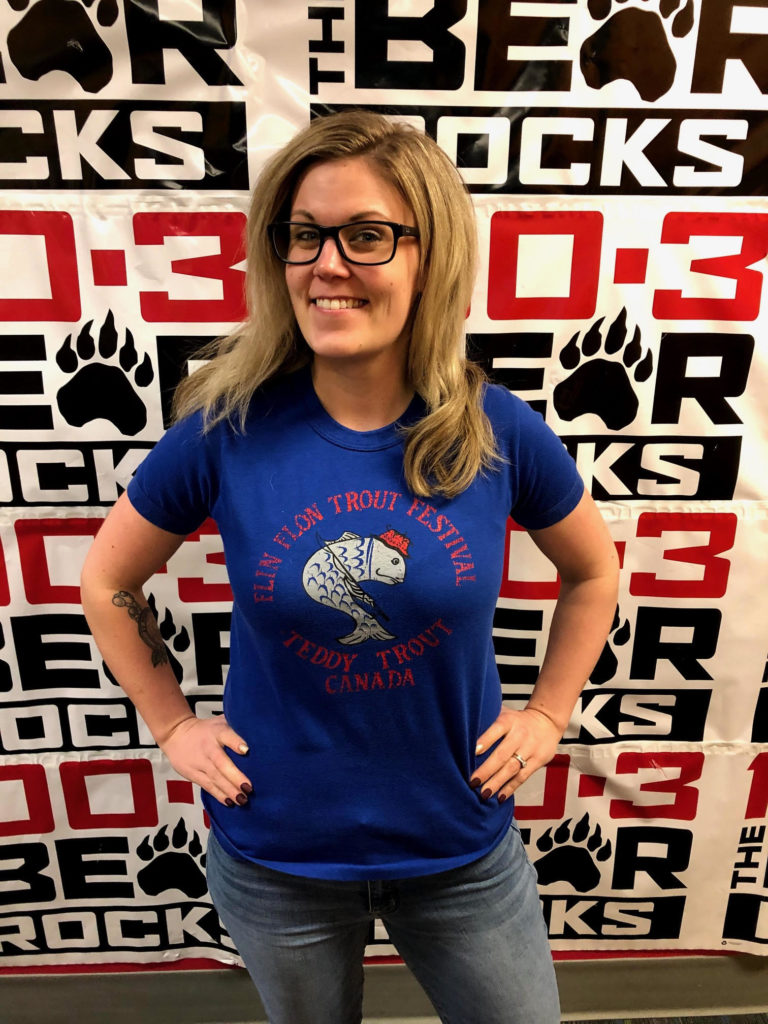 JESS: Radio has just been a lot of fun. When I enrolled in post secondary I actually wanted to focus on TV and my goal was to be a reporter. I think it was my first week when I knew it wasn’t for me. I had a class in tadio and never looked back. I instantly fell in love and that became my new goal.
I finished the two-year program at Assiniboine Community College in Brandon, MB and took a practicum placement in Cranbrook, BC. I did a little bit of everything there: on air, news, music scheduling, and covering the Jr hockey games.
Anytime I’m ever asked for advice on working in radio, I can’t suggest starting small enough. The experience I gained working in a smaller market was amazing and I wouldn’t trade it for anything. After my practicum, I was hired on as a mat leave fill in as an announcer on both the Country and Rock station. That was a learning curve in itself, I never grew up on country and had never listened to any country music.
I stayed in Cranbrook as an announcer for two years before a morning show co-host position came up in Lethbridge. I made the move and worked on a Top 40 station, eventually swapping spots with another female morning host in the building and moved over to the Country station morning show where I became ‘Bobbi Clark.’
After a while I made another move to a different station in Lethbridge, which was Classic Rock. My bread and butter and true love. After seven and a half fun, wonderful, and exciting years in Lethbridge I got the job as middays at The Bear and moved in October of 2013. Here I’ve stayed and don’t plan to leave anytime soon. I adore Edmonton and have always had my heart set on The Bear.
As cliche as it may sound, Edmonton will always be the City of Champions to me simply because of the close-knit community feel we have in a big city. It never ceases to amaze me just how wonderful this city can be in a time of need. That is one of the things I really love about working in radio here. The people and community support.
I’ve also never felt this connected with listeners. I’m not saying every day on air is sunshine and rainbows, but for the most part I feel most at home and in good company with all the people I’ve met in and around Edmonton.
KYLA: Can you tell us about your business, Twig and Barry’s?
JESS: In 2019 my family launched an online men’s apparel company. We started out with just the basics focusing mostly on socks and underwear. We’ve now expanded to much more apparel (hoodies, shorts, tees) tons of accessories (soaps, hats, gifts) and of course socks and underwear. We carry all the big brands like SAXX, 2UNDR, and Good Luck as well as our very own brands NUTSAK™️ and Twig & Barry’s. We also just opened a store front in St. Albert. We’re so thankful for all the local support around the city and country and we’re not done growing yet! Some big, new, exciting things on the horizon with T&B!
KYLA: What’s your favourite Oilers memory? 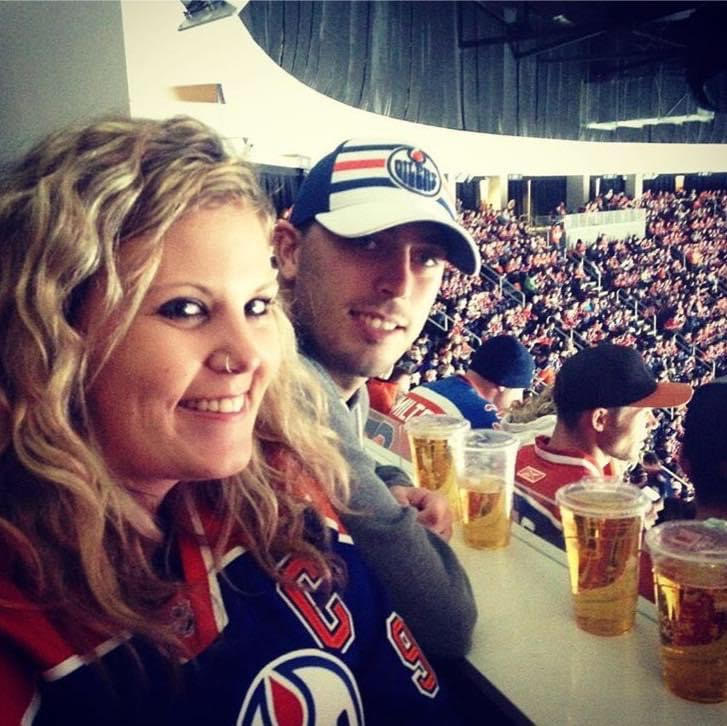 JESS: The last game at Rexall was pretty spectacular and the 2017 playoffs stick out. I was an Oilers fan long before moving to Edmonton (yes, it would make sense that I should be a Jets fan, but I’m not) so actually living in an NHL city during playoffs was pretty rad. I was also pregnant at the time, so taking it all in through sober eyes means I remember it all too! Haha We did playoff parties each game with The Bear and it was such a blast to be together with all the fans cheering so proudly. Yes, losing sucked but I’ll remember each of those game nights forever!
KYLA: What does hockey and being a part of the Oilersnation community mean to you? 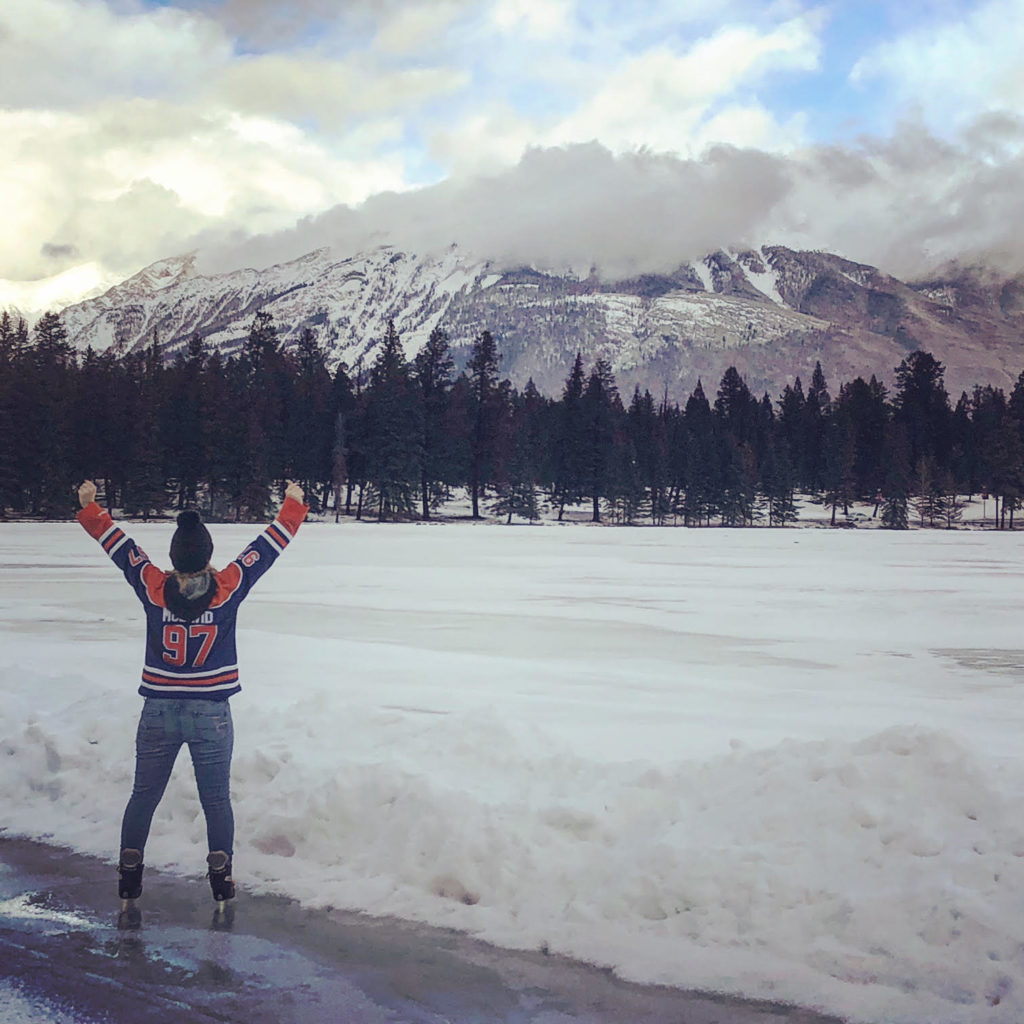 JESS: Hockey will always be a part of my life. I’ve loved the sport my entire life. Although my playing years were limited, I will always be a fan.
As far as the Oilersnation community, like I mentioned, being a long time Oilers fan but never living in Edmonton, it’s pretty amazing to see and feel the whole vibe through the fan base. I know Edmonton gets a hard time for being a harsh fan base, but isn’t every city like that? I love the passion and never die attitude of Oilersnation.
CONNECT WITH JESS ON TWITTER & INSTAGRAM!