By Kyla Lane
11 months ago
Our next Women of Oilersnation feature guest can confirm Oilers fans are taking over Vancouver, and we are here for it! Larisse Campbell is a theatre director who was raised in Edmonton and currently lives in Vancouver, cheering on the orange and blue every chance she gets.
If you missed the last Women of Oilersnation feature on Raylene Lung, you can read it here: 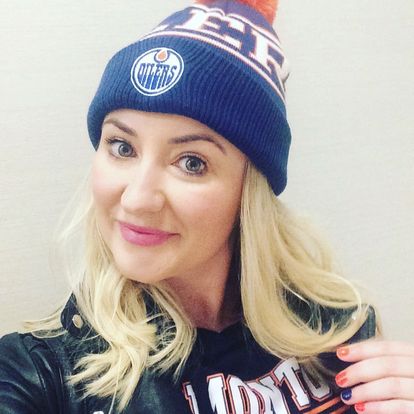 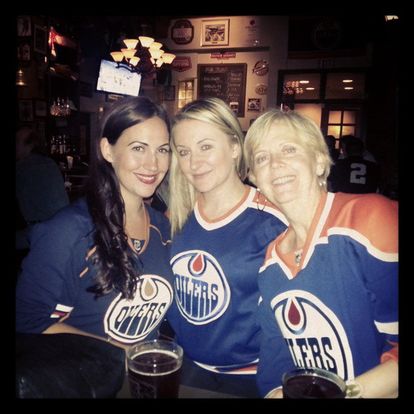 2. My first game in Las Vegas in 2018 was fantastic – I loved seeing all the Oilersnation fans partying and having such a great time on the strip. Loved walking to the game in a sea of moving orange. Las Vegas knows how to celebrate and Oilers fans know how to infiltrate a place and make the party theirs and we definitely all did that trip.
3. My first time taking my son to a game will live on in my heart as a favourite memory. We took him to a preseason game, just to see how he would do as he was only one and we didn’t want to overwhelm him. We arrived early and took him down to the glass to watch warm up and he was mesmerized with it all. He was in head to toe Oiler’s gear, down to little Oilers booties, so he looked like a seasoned fan. 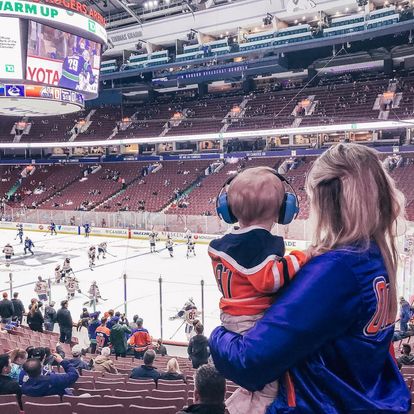 Colby Cave came by the glass and gave him a glass bump and smiled at him and that meant a lot to me. Lowen will never remember it, but I do. I send so much love and continued strength to Emily Cave as she navigates such a loss. Colby made that memory very special for us.
Lowen sat through the whole game staring at the ice and the players and movement of it all, and just like that, another Oilers fan was born. Like he had much of a choice.
KYLA: What does hockey and being a part of the Oilersnation community mean to you even though you’re a province over?
LARISSE: Being a part of Oilersnation, no matter where I am in the world, means that I can always find someone to commiserate or celebrate with, someone who understands how passionate we are. No matter what walks of life we come from, Oilers fans find each other and share such an awesome connection to our team. I have been in Amsterdam, wearing an Oilers hoodie and a man ran across the airport to show me his Oiler’s phone case. I have connected with strangers from Europe while traveling in Peru, when I was wearing an Oilers jersey and they wanted to talk about “The Great One”. It’s such a cool understanding of how amazing our team’s history has been and how bright our future looks. 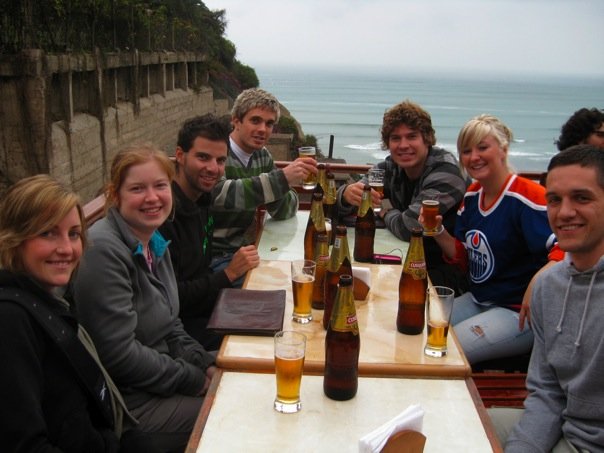 I love hockey, and I love Oilers hockey and especially the amazing community that loves the Oilers. We are a wild, motley crew of a bunch, but you can find us spread across the globe – and that connection to each other is really freaking cool.
Looking forward to connecting to all of you if even for a high five or “hell ya” at the next game, or trip to the States or wherever in the world we are.
CONNECT WITH LARISSE ON TWITTER & INSTAGRAM!